Why is Jason Chaffetz running away? A rising Republican star doesn't just retire from Congress for nothing

With no President Hillary Clinton to torment, the Utah lawmaker bails out. After the beach, what's next? 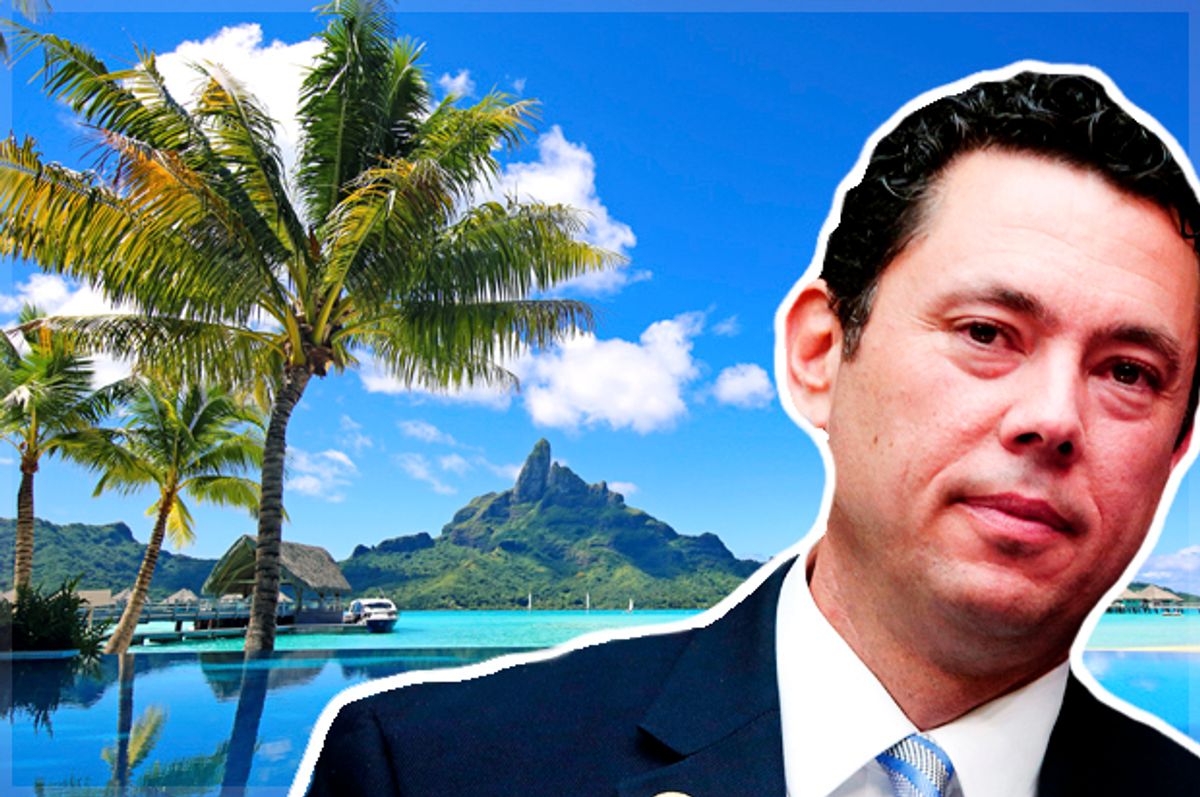 Wednesday's announcement by Rep. Jason Chaffetz that he will retire from Congress next year appears to have taken even senior Republicans both in Washington and his home state of Utah by surprise. Chaffetz has been a rising star in the House GOP caucus and has a powerful position as head of the Oversight Committee.

So why step down now?

As it happens, there are several possible explanations, ranging from the silly to the obvious. Which one is correct? As Peggy Noonan once said in another context, it would be irresponsible not to speculate. Hey, she’s a Pulitzer Prize winner.

He is facing pressure because of the investigations of Russia's ties to the presidential election.

The least likely explanation, unless we really are all living inside a spy novel sitting on an airport newsstand.

Controversial commentator Louise Mensch, one of the most vocal proponents that there had been a wide-ranging Russian plot to put Donald Trump in the White House, recently floated the idea that Vladimir Putin’s people have "kompromat" (or compromising information) on Chaffetz that they are using to blackmail him. This would explain why the normally investigation-happy congressman is not using his powerful position in the House to look into the complex web of ties between Trump’s close associates and assorted Russian oligarchs and politicians.

The more prosaic explanation for Chaffetz’s lack of interest in exercising his oversight power, however, is that he is an ambitious Republican who does not want to anger the GOP base or distract the White House with investigations that slow down achieving of his party’s already-comatose legislative agenda. That also explains why he is not investigating any of the myriad conflicts of interest between the White House and Trump's business interests that might show just how much money he and his family are making off the presidency.

In any case, where Chaffetz’s ambition conflicts with ethical oversight of a Republican administration, the ambition will win out — no contest.

Chaffetz seemingly has no intention of exercising oversight of his party’s president.

He may not see much point in being the powerful head of the House Oversight Committee with Trump in the White House and Republicans controlling both chambers of Congress. If Democrats take over the House in 2018, putting him in the minority and taking away his power, he will only have less to do. Might as well get out now.

He really does want to spend more time with his family.

He is cashing in on his congressional experience with a six- or seven-figure lobbyist job.

That kind of money means he won’t have to choose between buying health insurance or a new iPhone.

He wants to run for Orrin Hatch’s Senate seat in 2018.

If anyone is going to buck the Republican state party organization and take on a popular incumbent no matter how much opprobrium it brings him, it is Jason Chaffetz.

The longtime Utah senator recently announced he will run for an eighth term. But that was a reversal of an earlier pledge to retire, so who knows if Hatch will change his mind again? He will be 84 next year and has been in the Senate since 1977. Staring down a potentially tough re-election campaign, he could decide he has had enough. Maybe Chaffetz is banking on that.

Chaffetz could also mount a primary challenge to Hatch. Chaffetz won his House seat in 2008 after primary-ing a six-term GOP incumbent, against the wishes of much of the state’s Republican establishment. In 2012 he endorsed Gov. Mitt Romney for president in the Republican primary over former Utah Gov. Jon Huntsman, despite having managed Huntsman’s gubernatorial campaign in 2004 and then working as his chief of staff. This resulted in a public and bitter split between Chaffetz and Huntsman.

Chaffetz did say on Wednesday that he has no intention of running for any office in 2018. But if Hatch does retire, does anyone think Chaffetz would not reverse his position? Most likely while portraying himself as a reluctant warrior doing his duty for the good people of Utah. Hey, it worked for Marco Rubio in Florida.

Chaffetz may have played coy when asked about it by McKay Coppins of the Atlantic last month, but he has expressed an interest in the governor’s mansion before. With Gov. Gary Herbert saying he will not run for re-election in 2020, the competition for the job is wide open. Chaffetz could spend the next two years building up his visibility and contacts within the state before mounting a run.

And as reporters quickly noted on Wednesday, the internet domain jasonforgovernor.com already redirects to his congressional campaign home page. A look at Whois.com reveals the domain’s registration was updated on April 10.

It's also true a governorship would be the perfect experience to put on Chaffetz's résumé if he hopes to run for president in the future. He could serve two terms as Utah’s governor and then run for president in 2028, when he’ll be a relatively youthful 61 years old. That has to be in the back of his mind.

He just wants to avoid constituents bullying him at town halls for the next year and a half.

Because soulless conservative ghouls have feelings, too.