"We have done so much," boasts the president. But other than scary Jeff Sessions, it's been unmitigated failure 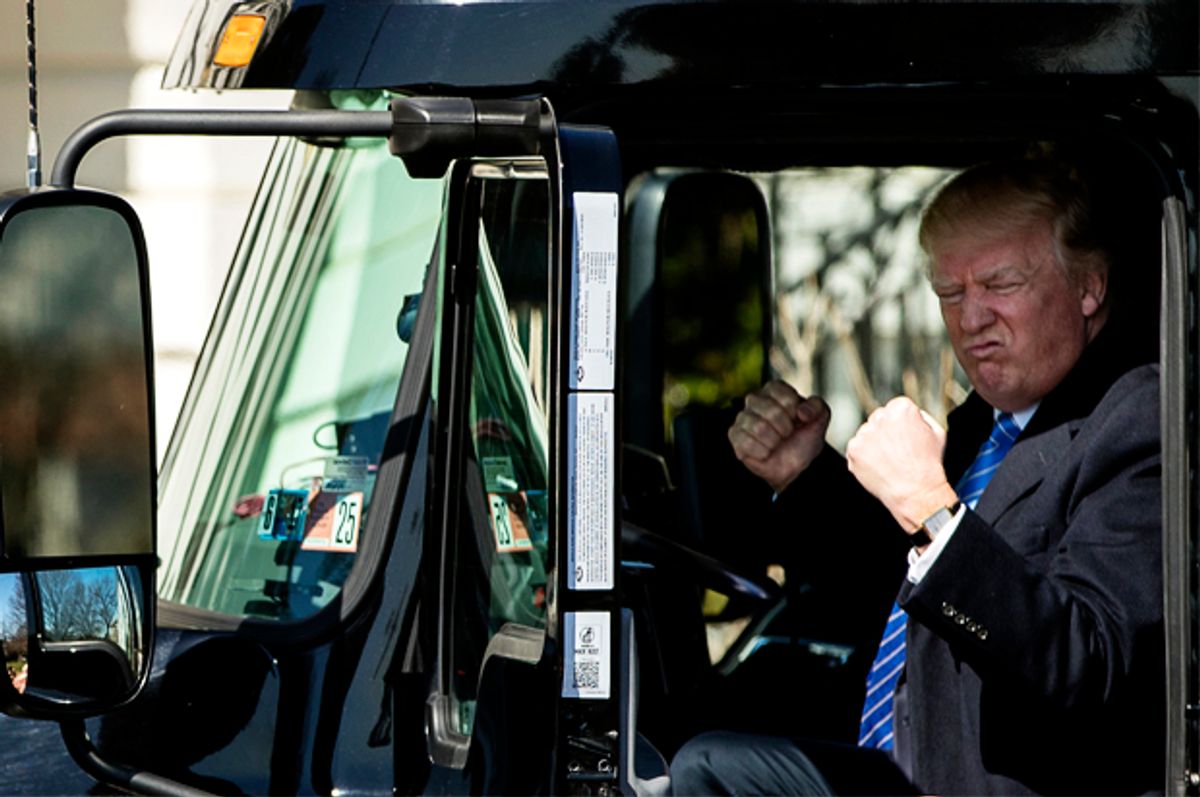 There is a lot of chatter these days about the looming milestone of the "first 100 days" of the Donald Trump administration and how he measures up in presidential history. This trope goes back to Franklin Roosevelt's first term, when he took office in 1933 amid the Great Depression, the worst economic crisis in America history, and promised to get to work immediately to bring relief to millions of suffering Americans. He declared a bank holiday to stop the run on withdrawals and immediately called Congress into session seeking to pass legislation to help farmers and unemployed people and create a federal jobs program.

Since then, all presidents come up for a 100-day report card. Most recently, President Barack Obama entered office during a major economic upheaval unleashed by a global financial crisis that had unfolded during the presidential campaign. He warned that it wasn't going to be easy, asking for the nation's patience and saying, "The first hundred days is going to be important, but it’s probably going to be the first thousand days that makes the difference."

During his transition period, Obama had been focused on finding bipartisan support for a stimulus plan to stop the bleeding of jobs and home foreclosures and managed to get it passed in eight days, with support from a handful of Republicans. He passed a budget resolution and signed major legislation on workers' rights and health care that had been stalled or vetoed under President George W. Bush. Obama also issued executive orders on numerous topics, from closing the prison at Guantánamo Bay to new government ethics rules. At the 100-day mark, 65 percent of Americans polled said they approved of the job he was doing, with only 29 percent disapproving.

Back on the campaign trail in 2016, Donald Trump portrayed the nation as a desperate dystopian hellscape and promised his adoring followers that he would make America great again. But he he went beyond that. Decrying NAFTA and inner-city crime, vowing to bring back jobs and go after undocumented immigrants, undo regulations and fight ISIS, Trump promised to fix it all "very, very quickly." Sometimes he'd add that it would "happen so fast your head will spin."

Indeed, Trump's pitch to his voters was that none of these were difficult issues and the problem had been our "stupid" leaders who just didn't know what they were doing. He famously said in his nomination acceptance speech at the Republication convention, "I alone can fix it," making it clear that he planned to do it all at once.

Just before the election, Trump released his plan for the first 100 days and it was extremely ambitious. He promised to reverse every Obama executive order he could think of and issue as many of his own as possible on the very first day. His ill-conceived travel ban was the most controversial and a few of his promises, like his pledge to "propose a Constitutional Amendment to impose term limits on all members of Congress," have been quietly shelved. Others, in light of subsequent events, now seem mordantly amusing, such as "a lifetime ban on White House officials lobbying on behalf of a foreign government."

Trump didn't manage to do everything on his list the first day but he fulfilled many of those promises during the first few months, most of them serving as props for his tedious daily signing photo ops, even if they don't really add up to any substantial accomplishments. And while his "big, beautiful wall" may be indefinitely put on hold (because it was an imbecilic idea in the first place), he's made real progress on his draconian immigration crackdown.

The Department of Homeland Security under former Gen. John Kelly and the Department of Justice under Jeff Sessions have most definitely taken off the gloves, and plans are underway for an even more drastic crackdown. In fact, Sessions is systematically carrying out Trump's "law and order" campaign pledges by turning back voting rights enforcement, "reviewing" police consent decrees, talking up the drug war and rejecting forensic science that leads to fewer innocent people being convicted.

But presidents are generally not considered to have had a successful first 100 days without any major legislative achievement, particularly when their party controls both houses of Congress. And the great negotiator presented himself as someone who could make "deals" almost magically. Indeed, it was the single most important skill he allegedly possessed. He was so good at it he would make Mexico pay for the wall and singlehandedly renegotiate all the trade deals so thoroughly that our trading partners would give up all their jobs and profits and thank us for the privilege.

Unfortunately for the president, he does not have even one real legislative victory. His most substantial achievement is a bill letting hunters kill bear cubs in their dens while hibernating. His only serious attempt at negotiating a legislative deal was so badly botched it ended in ignominious failure after just 18 days of debate in the House. That, of course, was the health care bill meant to "repeal and replace" Obamacare. Recent rumors of a quick revival are, according to savvy observers, a product of White House hype and desperation for a 100-day "win," rather than a sign of any real movement on the issue.

In other words, Trump's 100-day achievements have consisted of his signing of some orders, having his picture taken with people around a big table, instituting "law and order" through his henchman Jeff Sessions — and failing to get even one major piece of legislation passed into law, despite his party's congressional majorities.

According to the latest Gallup poll, he has the worst average approval rating (41 percent) during this period of any president in that survey's history, and by a margin of 14 points. Nonetheless, Trump says it's been the most successful first 100 days in history, telling Fox Business News:

We freed up so much and we're getting great, great credit for it. We have done so much for so many people. I don't think that there is a presidential period of time in the first 100 days where anyone has done nearly what we've been able to do.

To borrow one of his favorite phrases: That's fake news. And it's so profoundly delusional that it's actually kind of sad.