"When this concert happened where we had concrete threats, I faced the same dilemma as his musicians": Till Schauder, director of “When God Sleeps,” talks about Iranian rapper Shahin Najafi

Outraged and outrageous, Najafi is the only rapper building giant plaster penises with his hands 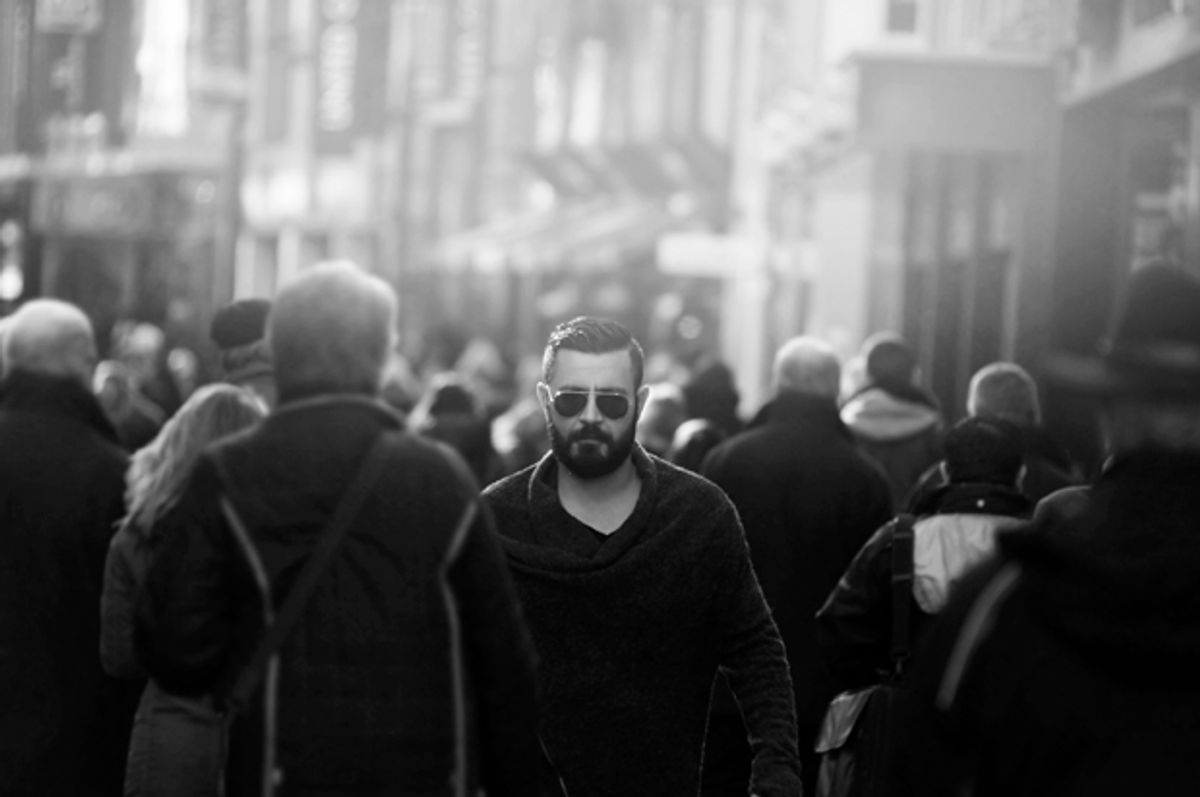 Till Schauder’s absorbing documentary “When God Sleeps” profiles Shahin Najafi, an Iranian rap musician and singer who lives in exile in Germany. One of his songs, “Naghi,” upset the government so much, it issued a fatwa against him. If he returns to Iran, he would receive 100 lashes, a 1 million tomans fine and spend three years in prison.

Najafi’s music is provocative. His catchy song “Mammad Nobari” features plaster of Paris penises. Schauder’s film shows the performer does not back away from controversy. He does not let the security threats he faces get in the way of touring — even though his longtime bandmate, Majid Kazemi, decides the pressure may be too much.

“When God Sleeps” introduces viewers to Najafi, his music, his girlfriend Leili, as well as his band and manager, Shaharyar Ahadi. What comes across is the performer’s resilience and strength. His music, he explains, is a reaction to an aggressive military service, which caused him to lose his faith. Now he speaks out against repression and hopes to raise awareness of refugees.

Schauder artfully chronicles Najafi’s life and work. The filmmaker spoke via Skype with Salon on the eve of his film’s world premiere at the Tribeca Film Festival.

How did you come to learn about Shahin’s music?

I did a film called “The Iran Job” and that film had a lot of Iranian rap and hip-hop music and some was by Shahin. Other musicians said if you put his name on the credits, please don’t put my name. He was toxic. That struck me as odd and interesting. I didn’t know Shahin, we just licensed two of his songs.

We wanted to invite Shahin to the premiere of “The Iran Job,” but we couldn’t reach him. And finally Sara, my wife and the producer of both of these films, told me, “Dude, look at the news!” I looked online and saw he had just received this fatwa and consequentially [went into] hiding, so no one could reach him. That was an interesting story.

I heard from others he’s not easy to deal with, so I didn’t want to send him an email and say, “I wanted to make a film,” but I had a chance to meet him organically when “The Iran Job” was at the Berlinale, and he came to that screening and liked that film. We started a courtship that lasted about six months until he finally said, “Let’s do this!” He had requests from other filmmakers — including Iranian filmmakers — so it was important that he was in agreement.

What is it about his music that you responded to? How did you identify with it?

That was a totally instinctual thing. When I tried out music for “The Iran Job,” I didn’t understand any of the lyrics from Shahin’s songs or any of the other artists’ songs. I went with feeling: Does that song work with that scene? On Shahin’s tracks, the feeling was authentic and I responded to them without knowing what he was saying. My father-in-law, who is Iranian, asked how I picked the tracks without knowing the words.

When I worked on “When God Sleeps,” I realized he was not just a rap musician. The label is an easy way for people to sum him up but he’s so much more. He knows classical, traditional Iranian music, Koran reciting, folk songs and modern stuff. He’s an amazing artist and that was why this film was fun to do. There are only three rap songs in “When God Sleeps.” The rest is heartfelt music that hits you between the eyes.

What was it about seeing him perform that excited you and [made you] decide you needed to make a doc about him?

The energy. I talked to his fans and bandmates and asked how they decided to perform with him. They said his presence is just like you want your frontman to be. He can get a crowd going. He’s a professional. If he’s not soaking wet after a rock concert, he did something wrong. In a solo concert, he doesn’t get so worked up physically, but he’s all there. The bandmates and audience appreciated that. As a filmmaker, obviously, I responded to that.

It’s fun to see someone giving so much energy. I wasn’t aware of how much you have to constantly expose yourself as a singer, versus a musician. You are communicating with everything you’ve got. He can’t help but do that always — often to his own detriment.

How did you get him to trust you to tell his story?

“The Iran Job.” I felt right away that he enjoyed that film and came to me after and he gave compliments. I had a sense that was important to him. He told me he didn’t want to work with an Iranian director because he didn’t trust them no matter how reputable they were. My wife is Iranian so I wasn’t a complete novice.

There were times over the multiyear project, he thought, “What the hell are you doing here?” He wasn’t aware of how much time and how much persistence I had, so there were some interesting butting-head moments.

With Najafi in hiding, there must have been some challenges in making “When God Sleeps.” Can you talk about the difficulties of the project? Did you face any threats?

It was like with his bandmates. When this one concert happened where we had concrete online threats, I faced the same dilemma as his musicians. It wasn’t fun to go to the concert that day. I had crew members drop out so there was a parallel to his band members [who didn’t perform].

I think that day the filmmaker part of me got the better of me [and I put myself at risk] but I didn’t feel good about it because I have a family. I bet I could have gotten the footage a different way.

Sometimes I knew more than his bandmates, but it was always a judgment call. There were times when I didn’t take [threats] so seriously, but you never quite know.

I did have to hire security people after the targeted concert. It was strange but I’m kind of happy that it’s over.

The film is very evenhanded, presenting Najafi as he is. What can you say about your approach to telling his story?

The never-judging-him part is important. He is being judged constantly. He has a huge following online. If you talk to any Iranian who is following politics, they know him and have some sort of opinion about him. He divides people. I could have easily judged him. You are not the only one who has questions about him because of how he treats his friends. I understood how [his bandmate] Majid and [his manager] Shaharyar acted and how Shahin responded to it. It’s about loyalty.

I remember when they were dropping out before the [risky] concert; part of the reason I didn’t leave was because I can’t be with him for two years and then leave when the going gets tough. Part of that is a crazy filmmaker thing, but part of it is team spirit. I have full respect for Majid and Shaharyar, but I also understand Shahin. I wouldn’t have dealt with it the way Shahin did, but to his credit he does soften up.

He goes to the extremes. When he has to choose between best friends and the desire to perform, he goes all the way.

There is a nice mix of concert footage, interviews and observational moments. What can you say about how you assembled the film?

It took a long time. We had a lot of footage. We didn’t edit the concerts until late in the process. We were focused more on the story. We treated the concerts as the basketball games in “The Iran Job.” You start assembling scenes and you have to have it make sense. I didn’t want to make a classic music documentary where the music takes over as a cheap layer. I wanted the music to be a character. Where we placed the concerts and what kinds of concerts they were were important for establishing his character and the arc of the story.

Was there a “get,” an unexpected moment you were grateful to capture on film?

Of course. That scene where he breaks down at the window — I’ll never forget it. He has a really difficult moment, walks into the other room, and the lighting was different. Normally, I would have changed the f-stop on my camera, but something told me don’t change anything. Keep the camera still, and he had that moment.

That’s when I knew I had the film in the can. Everything else was just piecing it around that one moment, which says so much about him and his situation. We had concerns from people that he’s too rough around the edges, that he never exposes his true feelings, and here I was capturing a moment where he just crumbles.

What observations do you have about Leili and her relationship with Shahin?

She is the voice of reason and what humanizes him. She’s young, present and outspoken. She’s very interesting and that she’s with him is almost a political act in itself. People are fascinated by the fact that she’s with him. Certainly it’s not an easy relationship. She’s very brave. You see what she goes through, and you get a sense of things.

What do you think the film can do to help or hurt Shanin’s exposure to a larger audience? Can “When God Sleeps” change minds?

I have had reactions from Iranians who disliked him and saw the film and were pleasantly surprised that they can relate to him. I hope that becomes a trend.

In terms of his reach, I hope the film will get a bigger audience especially in the Western world. He’s exposed in the Iranian diaspora. He could fill 100,000 seats in Tehran. In terms of the film endangering his activism, I don’t think so. Because the people that want to harm him already know about him; he’s being spied on. I hope perhaps the film gives him a level of protection, but you never know how things go.