Living "O Pioneers": or If you build it, they will come 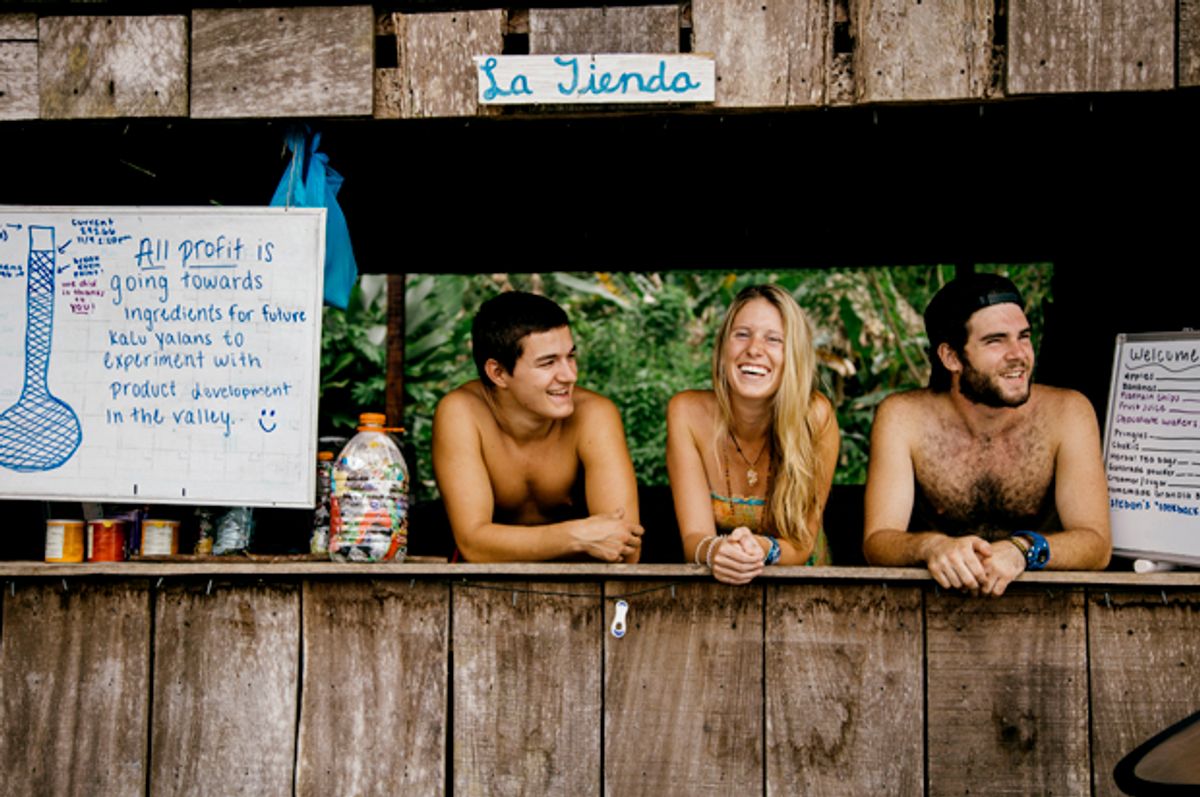 Iconoclasts aren’t always Mr. Nice Guy. More given to bombast than the warm fuzzies, they often straddle the border of propriety and insanity, propelling society out of its safe spaces. They aggravate as much as they innovate. In other words, you might be grateful for Steve Jobs for giving you that iPhone, but chances are you probably wouldn’t have wanted to date the guy or go on a cruise with him. RIP.

The first episode of “Jungletown,” a 10-episode docuseries on Viceland directed by Ondi Timoner, two-time Sundance Grand Jury Prize recipient for “DIG!” and and “We Live in Public,” introduces us to green visionary Jimmy Stice, a floppy-haired white guy from suburban Atlanta on a mission to innovate how we humans live on Planet Earth. “I’m not trying to change the world,” he says. “I’m just trying to change my world in a way that’s good for the world.”

This is just some of the sustainability wisdom Stice drops while clutching the steering wheel of his white flatbed, deftly navigating a dirt road as he discusses the relative benefits of its difficult ingress to Kalu Yala, the sustainable institute/encampment he has created on 500 acres of land in the Panamanian jungle. Listening to him wax philosophical about the ills of modernity -- “You can’t call your life beautiful if it’s making other people’s lives ugly,” he says, a statement that forms the warp and weft of “Jungletown” -- you can’t help but ponder Timoner’s stance on Stice. Is she putting him forth as an iconoclast or a wayward prepster? And is Kalu Yala the grand experiment or a grown-up Lord of the Why’s?

“My experience was that it was a return to living sustainably, which means returning to a primitive way of life,” Timoner tells me. “I originally wanted to call it ‘The Return.’ At the same time, the interns were making a tilapia pond but making a basin with unrecyclable tents, so it’s interesting, this question of what it actually means to return. Is it possible? The show lives in the gap in this vision. It lives in a grey area that I always like to explore. Around all of this you have these millennials thinking they deserve a legacy. They’re trying to build the most sustainable modern town, which is relevant whether you move to Panama or not.”

One of the ideas that “Jungletown” reinforces is that history is a real estate deal gone awry. Throw in some womenfolk, maybe a slaughtered goat and some infighting and you basically have all of civilization from Og meets Glog to “Deadwood” to Donald Trump. Sadly, industrialization, big agro and technological overload have wrecked this otherwise idyllic, divinely ordained recipe for natura naturans. No new information. The only solution, at least according to Stice, is to abandon the “segregation and unequal opportunity” provided by soul-crushing suburban sprawl and hightail it to Panama, which Stice did in 2007, first imagining Kalu Yala — meaning sacred land — as a carbon-neutral, diverse-price-point town that didn’t rely on commuters to be self-sufficient.

Subsequently, the real estate crash forced Stice to reconfigure his earlier model, and so he hit the books hard, reading up on financial markets and underwriting in order to avoid similar bad practices for Stage 2. He ended up at a conference in 2010 where he met 10 agricultural students who bought the eco-conscious startup idea he was selling and offered to volunteer as unpaid interns. Thus Kalu Yala was reborn as a safety net for the lost. From there, Stice began enlisting a cadre of millennial acolytes who each pay five grand to go to school at Kalu Yala. They also help do things like build compost toilets and figure out complex infrastructure problems while they — the shirtless interns, not Stice — live in tin-roofed, open-air structures and schlep through the mud during a seemingly endless rainy season. “The whole institute was started by students,” Stice says. “So it has a huge advantage over other towns. It asks the question of how are you going to use biology and marketing to be a better town. Knowledge is the best resource the U.S. could produce for itself and its economy.”

Throughout the first five episodes, Stice remains hard to figure. At times, he’s like a well-intentioned Ray Dalio, the founder of Bridgewater. At Bridgewater, employees carry iPads with apps that allow them to rate each other’s performance throughout the workday. Every employee’s behavior is under close scrutiny and intense, often negative public analysis, save, of course, Dalio’s, causing as many as 21 percent of new hires to leave within the first year. At Kalu Yala, the interns go hungry, literally licking their bowls, while Jimmy goes to Dunkin' Donuts – NB the final styrofoam holdouts — selects wine and eats junk food in Panama City. (He does not actually live in Kalu Yala, but offsite.) Other times, he appears somewhat brusque when faced with student problems, which begs the question why start a school? Meanies, however, make for interesting TV.

“Jimmy is definitely not a hippie,” Timoner adds, chuckling. “He feels he is doing something more rewarding. He’s asking, ‘What if the community determined the architecture and design from living in that place first?’ He’s not flattening the trees but building around them.”

“Real estate has always been a driver of segregation,” Stice tells me. “When I was 12, living in the suburbs of Atlanta, I thought everything was great till I saw “The Sandlot” and “The Little Rascals” and I wanted to live like that. But when I was 18, I realized the real estate industry is keeping us apart from each other. In the suburbs, you have these gated communities that are socioeconomically homogeneous. In Latin America, it’s the same, only less covered up and a lot more raw. Part of the idea is where is the world where everyone has equal opportunity and resources. I knew it could be done a lot better. All towns begin as camps.”

Watching “Jungletown,” one roots for this to happen. For the water to spurt, abundant and geyser-like, from the PVC pipe that ports it from somewhere upstream. For the soap to be biodegradable and the homemade washing machine to work. For everyone to shovel shit in peace and harmony. Yet, as early as the first episode, the interns start dropping out, unable to hang in the brutal atmosphere of the jungle -- some because of depression, others because of food allergies and still others because they start to doubt the the man behind the curtain. Are they really building a sustainable town, they wonder. Or is this just a scheme?

Additionally, the diversity dilemma, AKA the golden thorn in the side of every great American institution, is raised by more than a few interns, who, it must be noted, are mostly white. “Jimmy does want the rich and the poor, but how is he gonna get the poor here?” one girl wonders gloomily. “Are we pioneers or are we colonists,” another girl asks. “Diversity is the number-one problem at Kalu Yala that we are focusing on addressing over the next 12 months,” Stice says. “We are offering 100 percent scholarship to students from San Martín, 50 percent scholarship to students from Panama and 20 percent to anyone from Latin America, though we’ve found that people from Latin America don’t want to do study abroad in Latin America. I would also say there’s this demeaning, racist idea that everyone in Latin America is this poor, brown person when actually everyone in Latin America is incredibly racially diverse.” Stice continues, his voice rising. “There’s a huge Chinatown. There are Jews. There are six indigenous groups. There’s a lot of accusation that we pushed the indigenous people off their land and we came in with our own resources. That just isn’t true.”

“Jimmy said he feels like he opened his programs to bring Panamanians to live there,” Timoner says. “He’s attempting to diversify because it’s a lot of white people. There have been a lot of accusations of neo-colonialism, but again it’s the wealthy people who don’t spend their money figuring out solutions while Jimmy is figuring out solutions. Meanwhile, he’s allowing himself to be exposed by me and it’s an opportunity to weed out the people who won’t make it.”

Speaking of not making it, “Jungletown” definitely doesn’t shy away from the harsh reality behind meat consumption. Josué Muñoz-Jiménez, the staff farm manager, has a great line about this in Episode 4, after something not-so-vegetarian-friendly happens to the camp’s pet goat: “If you can’t stomach it, you literally shouldn’t stomach it,” Muñoz-Jiménez says, a spot-on adage for life in general. “Josué is the show’s moral compass,” Timoner adds. “He thinks there’s this trickle-down sustainability movement happening for those that can afford it but that ultimately won’t work. He doesn’t believe that change will happen without a full-scale revolution.”

It’s hard to say whether Kalu Yala is a full-scale revolution, a study-abroad program for outdoorsy millennials or some kind of goyische kibbutz. Watching it, you wonder if Kalu Yala can ever become a sustainable town. Who will live there? Where’s the library? And how will they go to the hospital if the road is so terrible? Is this part of the its brilliance or some overlooked detail yet to be ironed out by an intern? And what’s so bad about a little internet access?

In Timoner’s 2009 documentary film “We Live in Public,” the internet pioneer and dot-com millionaire Josh Harris creates a closed-environment concept/virtual world experiment in the 1990s in the basement of a building, which he then wires with webcams and microphones to capture the daily and nightly activities of 100 artists. He even installs cameras in the toilets, showers and sleep-pods of a Japanese-style, capsule hotel. His point? To prove that in the future we would trade privacy for connection and recognition (aka likes). Harris would also later install webcams in his own apartment so that people could watch him and his then girlfriend’s relationship, and later just him, decompensate. Watching him, you can’t decide if he’s about to invent Facebook or get 5150’ed.

But maybe this is the state of the iconoclast, precipitous and prescient, even pushy. They are ahead of their time. Whether or not this leads to an inflated sense of self or white-saviorism maybe just goes with the territory. Ten years from now, Jimmy Stice may have architected the first sustainable, farm-to-table jungle-town from scratch. What’s so crazy about that?