Why march for science? Because the value of social trust — under attack by Trump — is worth fighting for

Defending science is not just about resisting climate denialism. It's about bedrock values of social progress 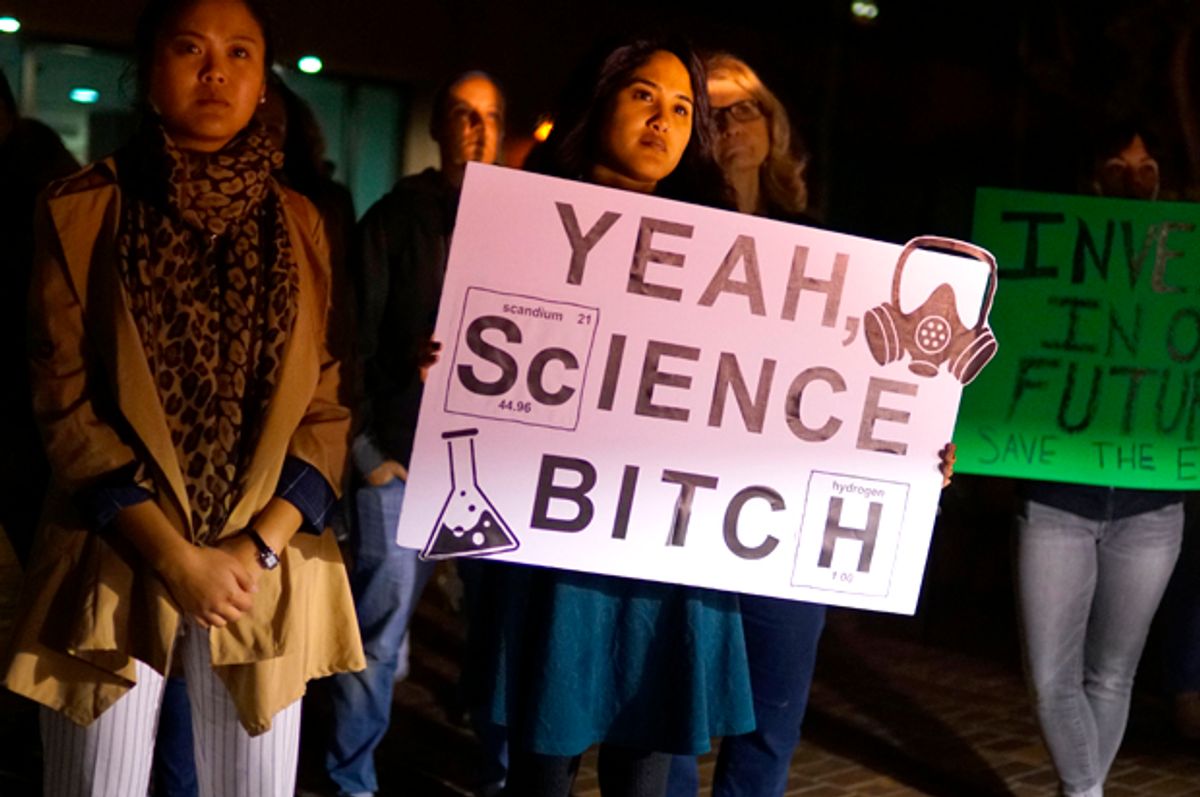 With science under attack under President Donald Trump as never before in recent memory, this weekend's March for Science has engendered broad, enthusiastic support, with more than 500 satellite marches listed. The role of science in illuminating the threat of global warming, and how to respond, is a key catalyst behind both the attacks and the response — and for good reason. It’s hard to imagine anything more high-stakes than the gamble we’re taking on our planet’s future.

Yet the attack on science is broader than global warming, or the environment in general, and there's still debate and reflection about the idea of the march itself. Some in the field still express reluctance to become politically engaged in fighting back — science shouldn’t be political, they feel. There are also concerns around science’s elite status.

“Unintentionally, marchers may reinforce the negative stereotype that science isn’t for everyone,” said Troy Livingston, Director of the Science Gallery Lab in Detroit, in a collection of views published on the Union of Concerned Scientists website. "I believe strongly in the values inspiring the march. But I also believe it will be a mostly white, mostly privileged and elitist group who will not be or appear inclusive of all people."

Those concerns are taken seriously by many organizers as well, however. The Los Angeles March for Science explicitly stresses the importance of diversity, as explained in its FAQ: "This is a March for Science ... and diversity is a big part of that. The diversity of life is what makes its study so fascinating! More specifically, the greater the variety of those who are doing science, and of their interests and perspectives, the better and broader the science and learning being done. Our core principles and values are strengthened, not distracted, by our commitment to diversity and inclusion."

But there’s another fundamental issue involved that doesn't receive nearly enough attention when people talk about science: the value of social trust, which is the glue that holds everything human together. Although the notion of the isolated scientific genius is a popular one — and accurately captures a particular aspect of the scientific process — modern science is a profoundly social endeavor. “If I have seen further,” Isaac Newton famously wrote in a letter to Robert Hooke, “it is by standing on the shoulders of giants." Even the quintessential lone genius of classical physics and mathematics was not an isolated figure at all, however much he might have seemed that way to others.

Three centuries later, it’s inescapable that scientific progress is only possible because the norms of the scientific community ensure high levels of social trust. Scientists routinely rely on the integrity of the work of others in everything they do, to a degree that would be unthinkable, say, in the world of real estate developers, used-car salesmen or politicians. Now, at a time when social trust in general is so badly frayed, it's a time to recognize and celebrate its fundamental role in making science work for all of us.

To really appreciate what I’m talking about, consider what philosopher Brian Keeley wrote in a 1999 paper, “Of Conspiracy Theories.” The problem with “unwarranted conspiracy theories,” he explained, “is not their unfalsifiability, but rather the increasing degree of skepticism required by such theories as positive evidence for the conspiracy fails to obtain.”

What Keeley is referring to here includes what’s come to be known as conspiracy theory’s “self-sealing” characteristic: if evidence against the conspiracy theory comes from a new source Y, the theory expands to include Y as part of the conspiracy. This self-sealing property is key to how global warming denialists have come to believe that vast majority of the world’s climate scientists are involved in perpetuating a “hoax,” as Donald Trump has called it. “As a result of this process,” Keeley writes, “an initial claim that a small group of people is conspiring gives way to claims of larger and larger conspiracies.”

As this kind of dynamic takes over, Keeley notes:

These theories throw into doubt the various institutions that have been set up to generate reliable data and evidence. In doing so, they reveal just how large a role trust in both institutions and individuals plays in the justification of our beliefs.

This point is key: Social trust is fundamental in making scientific knowledge possible. Without social trust — not blind, unwarranted trust, but trust, nonetheless — not only would scientific progress screech to a halt, we wouldn’t even have a static foundation of existing scientific fact:

The problem is this: Most of us, including those of us who are scientists and who work in scientific laboratories full of expensive equipment, have never carried out the experiments or made the empirical observations that support most contemporary scientific theories.

Unless we want to conclude that the vast majority of us are not warranted in believing that the platypus is a mammal and that gold is an atomic element, we need some procedure by which the epistemic warrant obtained by those who do make the appropriate observations can be transferred to the rest of us.

In modern science, this procedure involves the elaborate mechanisms of publication, peer review, professional reputation, university accreditation and so on. So we are warranted in believing the claims of science because these claims are the result of a social mechanism of warranted belief production.

When speaking of trust here, we are not talking about huge leaps of faith. Scientists are socialized to check and double-check things — to check their own work as well as one another's. It’s what they do. If anything, scientists have long been portrayed as existential skeptics, as doubters, unbelievers, who trust in nothing.  But that’s quite mistaken: They believe in being skeptical, in questioning. They trust in the process of systematically doubting, trying to poke holes in things to see what really holds up. And they trust in one another as recognized practitioners in the same skeptical tradition. Their trust is not taken on faith — it is built on years, decades, centuries of practice. It is something that each and every scientist has participated in creating as a direct product of how science is done on daily basis. It is, quite literally, inseparable from the work of science, and the knowledge that comes from it.

Science does not exist in isolation, Keeley notes. The public sphere has related mechanisms for producing warranted beliefs — the free press, government agencies, and free agents like conspiracy theorists themselves. “Inherent in the claim that alleged evidence against a theory should be construed as evidence for that theory is a pervasive skepticism about our public, fact-gathering institutions and the individuals working in them,” he concludes. This is where the problem of social trust is more usually recognized and observed. Trust in a set of eight institutions Gallup has tracked since 1985 — the churches, the military, the Supreme Court, banks, public schools, newspapers, Congress and organized labor — fell from an average 50.9 percent then to 32.5 percent in 2016.

This sort of broad decline in public trust is consistent with the erosion of cooperation observed in numerous societies during periods of disintegration, which alternate with periods of integration usually lasting a century or more each. American history has followed the same pattern, only a bit more rapidly than most, as explored in detail by Peter Turchin in "Ages of Discord: A Structural-Demographic Analysis of American History," which I reviewed here last October. While polling on public attitudes is relatively new, the rise and fall of levels of social strife can be traced back thousands of years, and America today is heading toward a peak period of discord around 2020, according to a set of underlying trends Turchin cited in a 2010 letter to Nature. The stagnation of wages combined with the explosion of inequality over a period of decades are two of the most salient features of the underlying dynamic.

Turchin didn’t specifically predict the election of Trump, and his spectacular elevation of conspiracy theories and science-bashing, but Trump fits well within the historical patterns of the past, as a frustrated elite aspirant playing on long-building popular resentments to propel him to power. Historically, figures like the Gracchus brothers, Tiberius and Gaius, during the Roman Republic, have often actually delivered — or died trying to deliver — on promises of restoring economic justice. But Trumpian hollow opportunism is common as well. There are plenty of modern elements implicated in the story — the Gracchus brothers didn’t have Twitter — but the severe erosion of social trust that Trump both feeds on and feeds into is a recurrent phenomenon seen over and over again throughout history. The good news is that eventually trust is restored. The bad news is what happens before that.

Science cannot undo the historical forces at work that have so weakened the bonds of trust, but it can help us respond more effectively. It can help us understand those forces — as the work of Turchin and others does — and that understanding can help form the foundations for turning the tide and avoiding the worst of what ages of discord so often bring. What’s more, the fact that science itself embodies such high levels of social trust provides us with an untapped resource on which to draw. Scientists are still in the early learning stages of engaging in science communication with anything close to the skill, discipline and rigor they bring to the work of science itself, but that is clearly beginning to change.

A key part of this communication must necessarily involve communicating the value of trust. And to do that, it needs to be much more consciously recognized, developed and fully realized. The concerns that Livingston raised are very real and important. Systemic problems such as gender bias in citations need to be recognized as damaging both the advancement of scientific knowledge and the underlying bonds of social trust as well. Scientific knowledge knows no boundaries of race, culture, gender, or sexual orientation, but the practice of science, by fallible individuals, in imperfect institutions, is itself in need of scientific self-examination in order to overcome its own shortcomings. In doing so, science becomes ever more able to enrich us all.

"Imagination is more important than knowledge,” Einstein wrote. “For knowledge is limited, whereas imagination embraces the entire world, stimulating progress, giving birth to evolution. It is, strictly speaking, a real factor in scientific research." It is imagination, coupled with curiosity, that first draws children to science, like bees to honey. And the March for Science is very much a march for imagination.

But it is also a march for social trust, because social trust is key to sharing our imagination. It, too, is a real factor — indeed, an indispensable factor — in scientific research, and all of life as well. That trust is now deeply imperiled in our society at large, and it will not easily be restored. Nor should it be easy. Trust should be earned, every day.

“I’m all for political activism, but I worry, just like with the Women’s March, that many people will call this march their contribution to this cause and leave it at that,” Livingston said. “What will matter most is not what happens on the day of the march but everything all of us have done and will do every other day of the year.”

That is where the real test will come. But the March for Science will reaffirm our resolve to face that test every day. It will strengthen the bonds of social trust we all need to fight for.