How often does Hollywood turn a great book into a great movie? 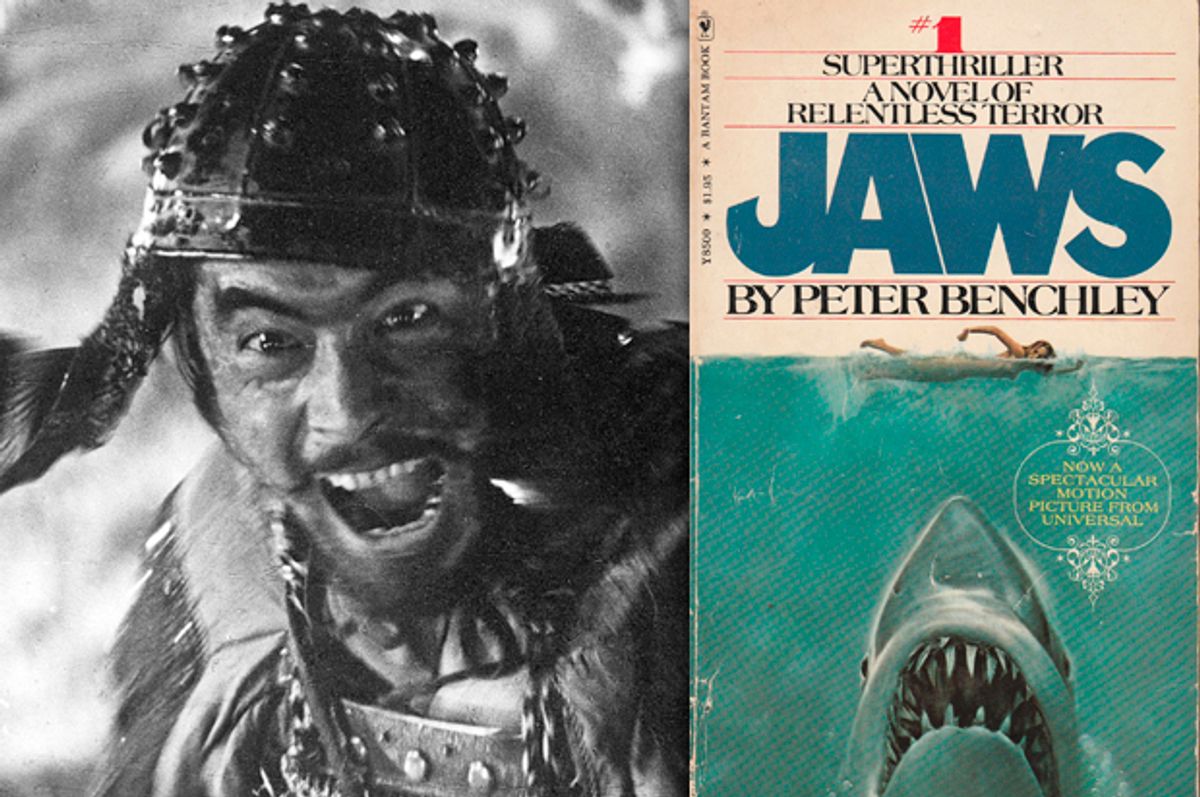 The search began from a place of pity.

We’d just received our latest Netflix DVD, Ewan McGregor’s adaptation of Philip Roth’s Pulitzer Prize-winning novel “American Pastoral,” which came and went last fall with hardly a poof of recognition from critics or audiences. As I held the DVD in my hand, some part of me wondered why filmmakers still bothered. Why do they think they can turn great novels into great movies? That happens so rarely.

Then I paused: Has it ever happened?

I thought for a bit, then posed the question on Facebook: “What is the greatest novel that’s been made into the greatest movie? I mean ‘Ulysses’ or ‘The Great Gatsby’ for novels, and ‘The Third Man’ or ‘Seven Samurai’ for movies. Any thoughts?”

I expected only a few responses. I got a deluge.

Jokes aside (“Twilight,” “Dumb and Dumber 2”), you can divide most of the answers into three categories.

The first is the great film made from the merely popular novel. The books tend to be No. 1 bestsellers, often trashy, and hardly canon in English departments, while the movies are works of art. “The Godfather” and “Jaws” are classic examples, but you could also include “The Shining” and “The Thin Red Line.” But not an answer.

“Jaws” was actually one of the first books I read that I then saw as a movie, and I remember sitting in the theater, all of 12, confused by the disparities. In Peter Benchley’s book, marine biologist Matt Hooper is a Robert Redford type, tall, blond and handsome, who has an affair with Chief Brody’s wife, and who gets his in the end in the shark cage; yet in Steven Spielberg’s movie he’s short, bearded and Jewish, nothing happens with the Mrs., and in the end he pops up after the shark is blown to bits. “They got it wrong!” I remember thinking. Yeah: They made it better.

I was a bit thrown by the second category of answers because it’s not what I had in mind and it’s not in my wheelhouse. They’re great genre novels that have been turned into great movies. Think sci-fi/fantasy (“The Lord of the Rings”; “Blade Runner”), westerns (“Shane,” along with two Coens: “True Grit” and “No Country for Old Men”), and crime (“L.A. Confidential”). I don’t really read genre novels, so you can assess for yourself the greatness of those books. But to me it’s a bit of a cheat, the movies being primarily a genre art form. Transferring from book genre to movie genre seems easier.

To make a great movie from a great novel, you would have to ignore what makes the novel great in the first place — its singular voice — because that’s the one thing you can’t transfer. In essence, an entirely new artistic voice is needed.

The history of Hollywood is littered with near misses. “Moby-Dick” is considered the Great American Novel but John Huston’s adaptation is one of his least-seen films. Every generation gives “Gatsby” a go. “Breakfast at Tiffany’s”? The 1960 movie version takes its character/narrator, whose sexuality is ambiguous even if his love for Holly Golightly is not, and turns him into a ponderous, painfully straight, wooden leading man. Spielberg’s “The Color Purple” feels too slick and pretty given the trauma of the story.

Then there are the Brits. What’s the best Dickens adaptation — David Lean’s “Great Expectations”? Alastair Sim in “A Christmas Carol”? Is Ang Lee’s “Sense and Sensibility” the best Jane Austen we’ve done? Should any Merchant/Ivory production of an E.M. Forster novel be included? How about Michael Radford’s version of George Orwell’s “1984,” suddenly relevant again after all these years?

I was also curious what our institutions said. Is there any overlap, for example, between Pulitzer Prize-winners in fiction and Oscar winners for best picture? Yes, although for only a brief period, and oddly restricted to stories set in the South:

Why none in more than 55 years? Maybe because — the Ewan McGregors and James Francos of the world notwithstanding — Hollywood just doesn’t try to adapt great novels as often as it once did. Only three Pulitzer winners this century have been adapted for the screen, and two of those, “Olive Kitteridge” and “Empire Falls,” became HBO miniseries — where the novel’s long form has room to ramble. The third is Cormac McCarthy’s “The Road.” Everything else is “in development.”

Another possible factor: Many of the recent Pulitzer winners are from women and people of color, and Hollywood hasn’t exactly been at the forefront of championing the stories of either.

In the end, these were the best answers we came up with. Your mileage may differ:

Looking over that list now, though, I find myself slightly disappointed. Yeah, it’s Kubrick, but you lose so much without Humbert’s voice. Yeah, it’s Nicholson, but McMurphy’s tri-part rebellion (thesis/antithesis/synthesis) gets truncated in the movie. Yeah, Daniel Day-Lewis and Lena Olin in that hat; but too much of Kundera is missing.

There’s a great line from Don Draper in an early episode of “Mad Men”: “I have been watching my life,” he says. “It’s right there. I keep scratching at it, trying to get into it.” That’s what movie adaptations of great novels often feel like. The filmmakers, and us, keep scratching at these great characters, trying to get inside them; but you only get inside them in the novel.

As for McGregor’s adaptation of “American Pastoral”? You didn’t miss anything.