"Mary Kills People": An agile drama about the risky business of delivering a good death 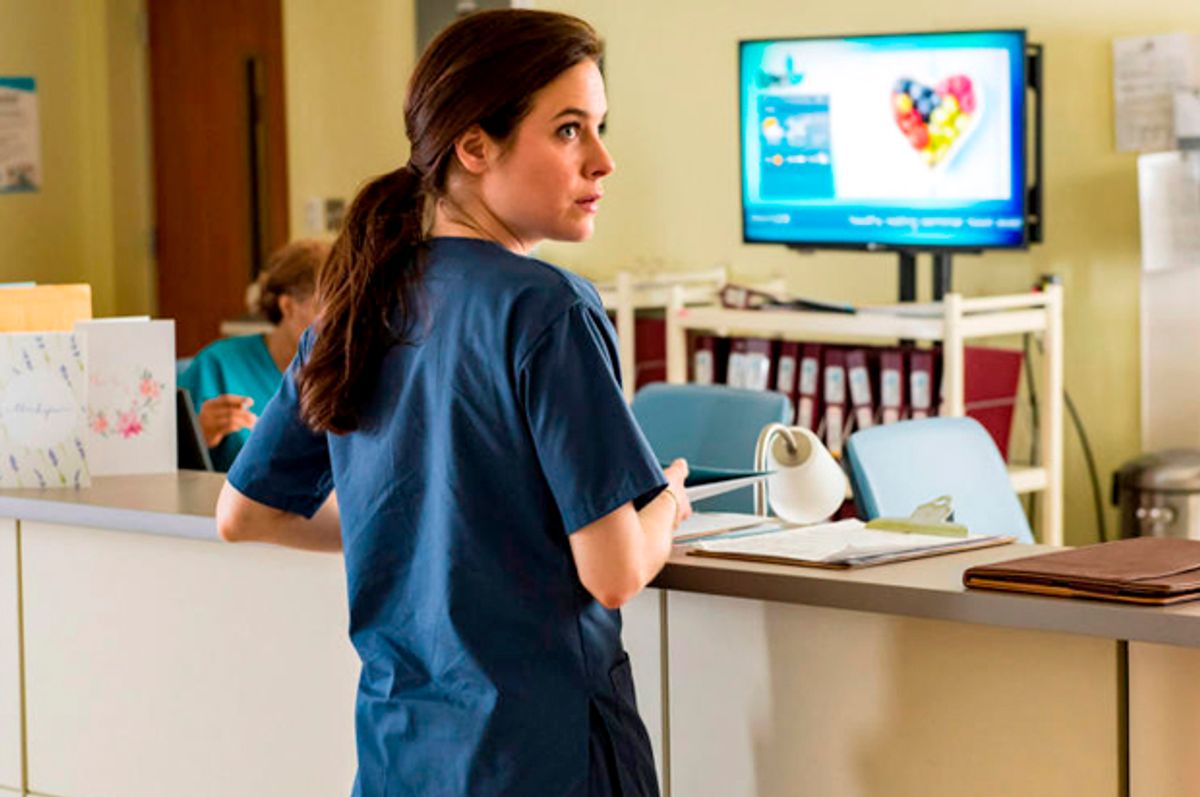 Hiding within “Mary Kills People," debuting Sunday at 10 p.m. on Lifetime, is a compassionate, oddly accessible and, dare I say, lively examination of assisted suicide. That last descriptor, "lively," defies the typical view of death and dying, and that’s intentional. Of all the adjectives one might use to talk about "Mary Kills People," heavy isn't one of them.

This is a series that moves and twists, and prods the audience's sensibilities. The title itself, “Mary Kills People,” is a provocation. Dr. Mary Harris (Caroline Dhavernas) ends lives, but she's not a cold killer. To her, death is a gift, an opening of the gate between our world and the next. For an envelope full of cash and a signature on a contract, Mary delivers the key in a champagne flute and disappears quietly after the job is complete.

What the title doesn’t tell you is that Mary derives satisfaction and, sometimes, outright joy from being an outlaw. And that rush is the force driving this agile, energetic series.

The very concept of “Mary Kills People” is bound to raise a few eyebrows, to say nothing of its employment of high-concept components for the sake of keeping the audience interested.  Each episode vibrates with a crime thriller’s anxiety, braiding that energy into a portrait of a divorced emergency room physician who moonlights as a dispenser of lethal mercy.

Although Lifetime recently announced a brand pivot, “Mary Kills People” nevertheless aligns with the channel’s classic “women in peril” motif without engaging in a mote of exploitation. The fact that it respectably honors the solemnity of its subject matter even as the story entertains is what ultimately makes the sale.

Otherwise, who would willingly tune in to a scripted show about assisted suicide? Mortality remains a taboo issue in our culture; we don’t like to think about the fact that we're doing to die, and we really don’t want to contemplate having to witness loved ones passing away.

But in scenes focused upon the process, "Mary Kills People" grants the pursuit of a good death an air of grace. She’s an empathetic businesswoman, but one whose devotion to the idea of choosing an exit over an agony-filled life is informed by personal experience. Paraphrasing one client’s brave observation, there is beauty in the inevitable — and there’s money to be made there, too.

The top-shelf deliverance offered by Mary and her partner, Des (Richard Short), is not free. Switzerland, as explained during their consultation speech, is a “suicide tourism” destination, an option for terminal patients with the desire and means to determine their own ends. But they can give people bedside service for half the cost, at home or a destination of their choosing.

“I believe we should be in control of our life and our death — that’s liberty,” she explains to a client. “And dying isn’t a crime.”

When Mary and her off-the-books clients are in control of their plans, she and Des are participants in a sacred process that allows the dying to escape the agony their failing health is inflicting upon them. As directed by series co-executive producer Holly Dale, these scenes can be exquisite celebrations, showing life as a blast of beauty as viewed in a client's final moments.

Other exits are less exuberant but a release nevertheless, spirits exhaling from tortured physical prisons.

All of these transitions are the artful garnishes on a series built around the risk of what Mary is doing. For regardless of a viewer’s opinion on euthanasia, there’s no getting around the fact that Mary and Des are criminals.

That part gives her a jolt.

“Mary Kills People” is a Canadian import, and for what it’s worth, Canadian lawmakers passed legislation legalizing physician-assisted death (with qualifications) last June. As depicted in the series, Mary and Des are still breaking the law, and in the U.S. only California, Colorado, the District of Columbia, Oregon, Vermont and Washington state have Death with Dignity laws on the books.

As such, the strain and risk Mary and Des assume in her work feel genuine. Des, a recovering addict who lost his license to practice medicine, has to do business with dangerous people to get the drugs they need. Mary is gambling with her career and her family every time she takes on a new client.

Strange as it feels to probe the emotions and material concerns surrounding the intentional ending of life, to frame it in a story of a risk-taker seems even more precarious. And at first, TV familiarity with Mary’s straight life makes the tonal juxtaposition of her after-hours activities feel jarring.

For without her moonlighting business, Mary Harris ably fits the profile of a Lifetime heroine. She’s a harried, skilled E.R. physician whose male co-worker lets her do the heavy emotional lifting, with an ex-husband who chastises her for putting her career ahead of spending time with her daughters.

A performer versed in blending warm vulnerability with an unyielding flint, Dhavernas could have made such a stock character work well enough to pay the bills. But the drama’s dual flirtations with death and danger add an engrossing unpredictability to the mix that Dhavernas uses to her advantage.

Mary’s illegal side job and the whiff of pleasure she takes in flouting the law allows the actress room to dance with the full range of emotions.  And viewers who recall Dhavernas from her work in “Hannibal” should delight in seeing her occupy the skin of a woman who isn’t angelic and skilled in staying a step and a half ahead of a downfall.

With Dhavernas in the lead, and strong support work by Short and co-stars Jay Ryan and Lyriq Bent, “Mary Kills People” is engrossing, dark and funny in the right places. Over the course of six nimble episodes the plot assuredly builds to a crescendo that speaks just as compellingly about the price of living a determined life, and the tradeoffs required to do so, as it does about the right to die on one's own terms.

Speaking to the mounting consequences of her work in an upcoming episode, Mary sighs, “Life is a ride in the dark.” "Mary Kills People" is its own special trip, and one definitely worth taking.