What you don’t know about the Holy Grail 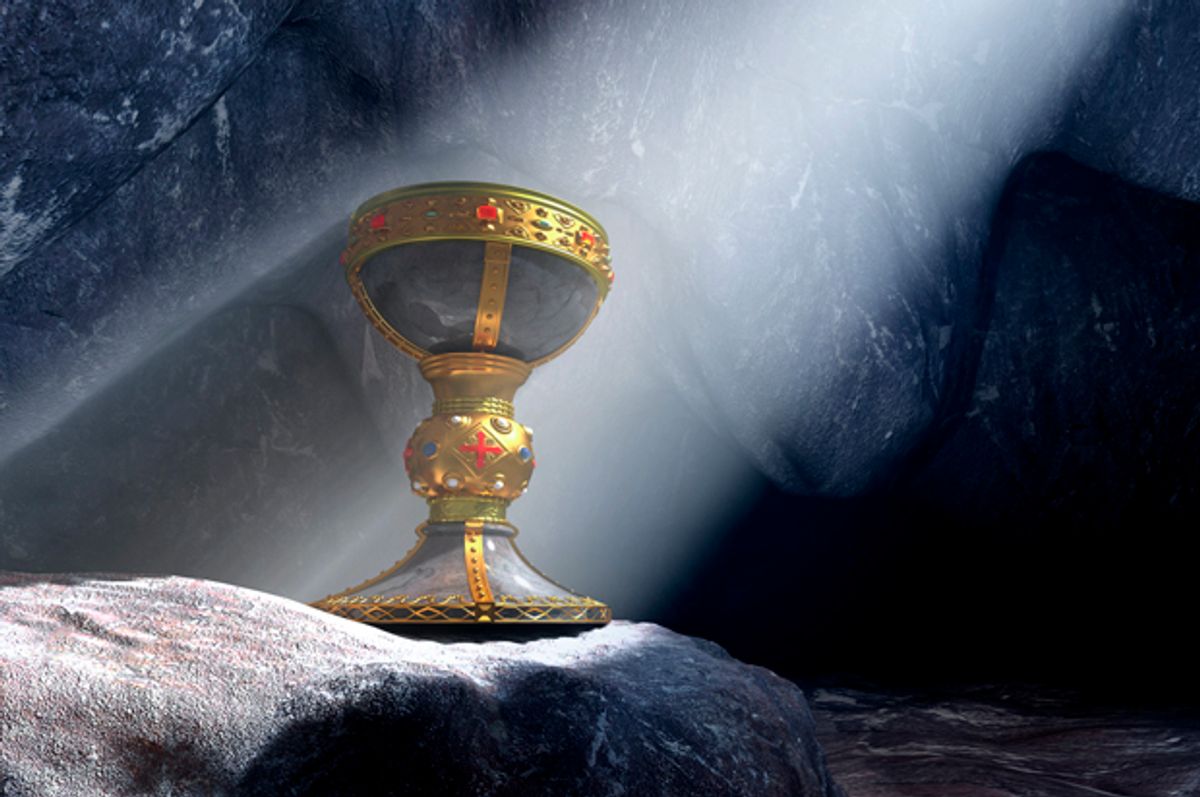 I grew up playing Advanced Dungeons & Dragons, a screenless role-playing game in which you designed characters whose attributes were partially determined by rolling dice, and who you navigated through a fantasy world narrated by a Dungeon Master, who would make up the adventure and obstacles for you and your friends to overcome. This was catnip for 12-year-old boys, at least before video games got so ubiquitous, complex and engrossing that they offered a more immersive experience, all without requiring a human Dungeon Master and with the addition of buttons to click. Not just playing, but thinking about Dungeons & Dragons stimulated my young imagination, expanded my lexicon considerably (how many 12-year-olds use the words "dexterity" and "comeliness" in casual conversation?), and helped me become a writer and a designer of worlds in a way that the more passive experience of playing video games, no matter how impressive their virtual realities might be, does not.

I would spend evenings before bed thumbing through various manuals and encyclopedias of monsters and magical items that players could integrate into their Dungeons & Dragons adventures. I remember magic items like the Decanter of Endless Water (which pretty much does what it says on the tin), the Ring of Mammal Control (always useful), and the wonderfully named Philter of Glibness. We took these items very seriously, and that is likely why we found some of the parallel objects in "Monty Python and the Holy Grail" so funny. The Holy Hand Grenade of Antioch sounds just about like a magic item that some acne-riddled young Dungeon Master would put to use to do away with a carnivorous, throat-tearing bunny rabbit.

Which reminds me: Happy Easter!

Where am I going with this, you may wonder? There is indeed a link between the “magic items” of 1980s teenage imagination, bunny rabbits, Monty Python and Easter. The point of union is in religious relics: inanimate objects or parts of the bodies of saints thought to possess miraculous properties, or to imbue those who possess them with supernatural powers.

There was a lively trade in religious relics, particularly during the era of the Crusades, when Christian soldiers returned from the Holy Land carrying trophies acquired there. Some fragments of bone that made their way to the sacristies and reliquaries of Europe were surely once a part of this saint or that. Some were genuinely believed to be authentic by the homebound soldiers bearing them. Others were intentional forgeries, meant to impart prestige or profit. But the origin story, in the hands of a Crusader just returned from, say, Antioch, was sufficient to convince most. Visiting relics could lead to years peeled off of Purgatory or remission of sins, and the financial market in relics and sin-dismissal helped encourage Martin Luther to start the Reformation.

There are tens of thousands of reliquaries in European churches and aristocratic private collections; far too many pieces of the True Cross to actually be from a single cross, too many bones of one saint or another to comprise a single complete human body, and various rivals that each claim authenticity (see my past column on the Holy Lance). Some famous relics were denounced as forgeries by the Church itself, like the Shroud of Turin — it was proven by multiple independent laboratories to have been a 13th-century painting meant to look like Christ’s burial shroud, and yet it still draws millions of pilgrims determined to overlook science in favor of faith. I recently read Christopher Buckley’s "The Relic Master," a novel of delightful fun (one which I kept thinking I should have written), about art theft and forgery and the Shroud of Turin in 16th-century Europe, starring Albrecht Dürer. It was about just this subject.

With the Easter season, I begin to wonder about that most famous of Christian relics, sought by the Nazis in real life and by Indiana Jones and Robert Langdon in the realms of fiction: the Holy Grail.

The Holy Grail, it turns out, is never mentioned in the Bible, nor in any of the biblical apocrypha. While it may have been referenced earlier, it is largely an invention of medieval Arthurian romances, with the first known written reference coming as late as 1190, in the fictional epic "Perceval, le Conte du Graal" by Chretien de Troyes. One of the early works of fan fiction, the romances of Wolfram von Eschenbach, who was inspired by Chretien de Troyes, described the grail as a stone that fell out of the sky. It was in the late 12th century that another poet, Robert de Boron, described the grail as the cup from which Jesus drank at the Last Supper, and which Joseph of Arimathea used to catch his blood at the crucifixion, in his epic "Joseph d’Arimathie." This tied the word “grail,” which means an earthenware cup, to the idea of the Holy Chalice, which is referenced in the Bible (Matthew 26: 27-29). But the idea that this cup, which inspires the Eucharistic drinking of wine, appeared at the crucifixion, or that it possesses some supernatural properties, appears to be an invention of a poet living some 1,100 years after Christ.

That did not stop centuries of people from believing in it (and assuming that it had biblical origins). Certain Nazi high-ups, including Hitler and Himmler, believed that religious relics could grant magical powers — that they were real magic items in the vein of Dungeons & Dragons. Himmler’s supernatural research bureau, the Ahnenerbe, sponsored expeditions, led by scholar Otto Rahn, in search of the grail.

But has anyone found it? I mean, the real one?

There are several candidates. In the red corner, we have the Valencia Chalice, the santo caliz, preserved in a spectacular reliquary and visited by hundreds of thousands of pilgrims. It is carved of blood-red agate with a base of chalcedony (a quartz-like stone), likely made in Palestine or Egypt around the 1st century BC or AD. In the green corner, we have the Sacro Catino, pride of Genoa Cathedral, which is hexagonal and made of green glass, discovered in Caesarea in 1101 but not described as the Holy Chalice (much less the Holy Grail) until the 13th century. It looks like something out of a sci-fi film from the 1950s. In 1432, it was described as having been carved out of “a single emerald,” and was looted by Napoleon in 1805, only returning to Genoa in 1816.

There is one major problem with these two leading candidates. A problem, it should be said, which has not inhibited the enthusiasm of those hundreds of thousands of pilgrims. As fans of "Indiana Jones and the Last Crusade" will know, neither of these mega-expensive, elaborate chalices looks anything like the cup a voluntarily impoverished Jewish tekton circa 32 AD would drink from at a Passover seder with his equally humble friends.

Scholars agree that there was, indeed, a real person named Jesus of Nazareth who was executed by the Romans in Judaea — the only question, one of faith, is whether you believe that he was the Son of God. As an observant Jew who genuinely thought that he was the Messiah, the historical Jesus of Nazareth would have had a cup, and so logically if such an object existed, it is lost but might, conceivably, be found. There are "Da Vinci Code" enthusiasts who like the idea of the Holy Grail as a metaphor for Mary Magdalene or the offspring of Mary Magdalene and Jesus, in which case the hunt for a physical cup may not make much sense. But the very idea of the Holy Chalice, which does appear in the Bible, transforming into the idea of the Holy Grail only after a millennium had passed, is food for thought — we should probably not be thinking of the Holy Grail as anything more than an invention of high-end fan fiction twice-removed, written by a poet who was inspired by the Bible, of course, but also by Chretien de Troyes’ Arthurian Romances.

The Holy Chalice, however, surely existed. It’s up to you if you believe it was truly holy, a magic item, or rather simply a historical object of cultural importance. But whatever Jesus drank from at the seder before his execution, it was far more likely to be made of clay than of agate, glass or gold.