Who just made the case for drug legalization? Drug-warrior in chief Jeff Sessions, that's who 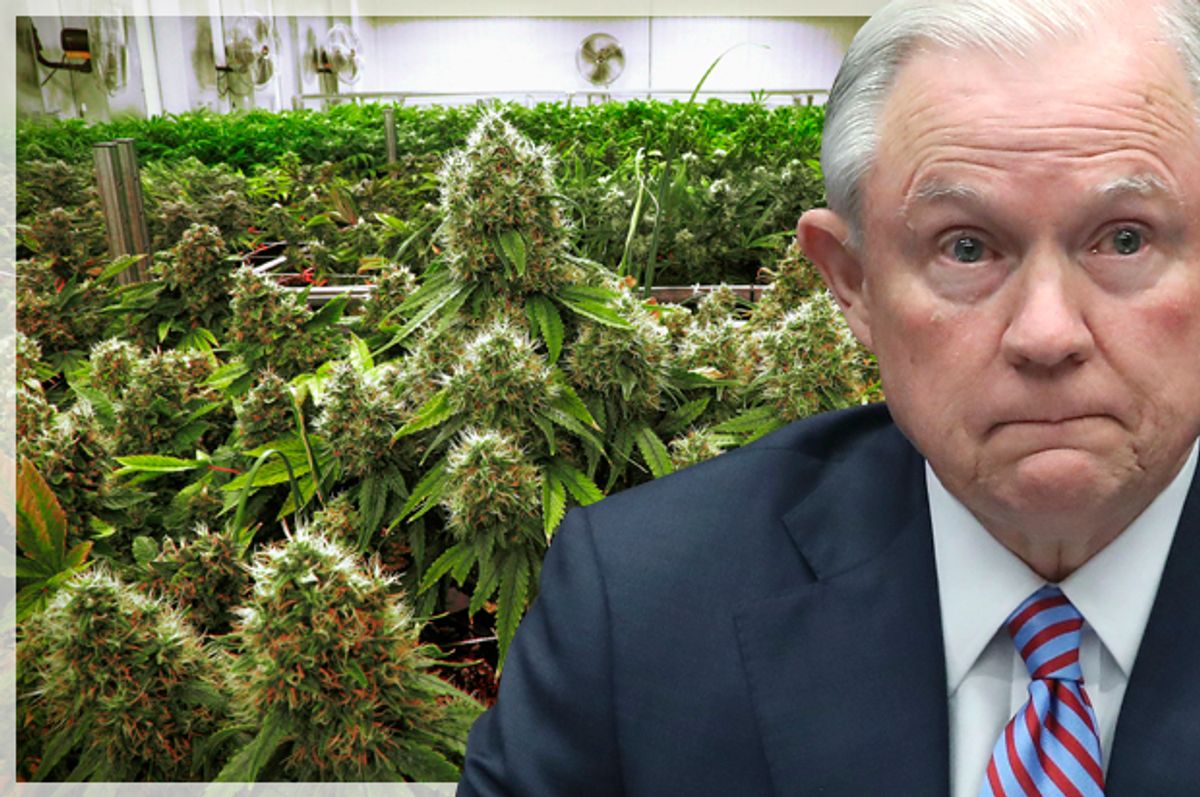 “You can’t sue somebody for a drug debt. The only way to get your money is through strong-arm tactics, and violence tends to follow that,” Sessions told reporters.

This claim has been repeated by the Justice Department’s Steven H. Cook, a close Sessions ally.

Eight states and the District of Columbia have legalized marijuana. Marijuana growers, distributors and buyers in those juridictions can go to court to settle their differences rather than resorting to violent self-help. The violence that Sessions insists is inherent in the drug trade is a byproduct of prohibition.

It’s certainly true that the manufacturers, distributors and users of illegal drugs cannot avail themselves of the court system when disputes arise. Sessions’ implication that the problem is inherent in the drug market, however, is simply false. The reason drug market participants can’t go to court is because the government refuses to let them.

With the passage of the 18th Amendment in 1919, the American alcohol market was driven underground. As prohibition took hold, the murder rate skyrocketed, attacks on police officers spiked, and criminal gangs took over large swaths of urban America. We talk about Chicago today as a city plagued by crime, but Prohibition-era Chicago had it beat hands-down. The market for alcohol didn’t evaporate under Prohibition, it just became more illegal and more violent.

When Prohibition was repealed by the 21st Amendment, the murder rate dropped for more than a decade. Attacks on police officers dropped as well, and the wave of crime receded … until the drug war ramped up.

A study by the Rand Corp., commissioned by the Obama administration, estimated that the U.S. market for marijuana, cocaine, heroin and methamphetamine alone is worth more than $100 billion a year. That much money changing hands without any access to peaceful, lawful means of dispute resolution is a recipe for disaster, and we’ve seen the consequences of that disaster on our streets and in those of neighboring countries.

Even conservative estimates put the toll of lives lost to the Mexican drug war in the tens of thousands. Other estimates reach much higher. Police and paramilitary responses have failed to stem the flow of illicit drugs into the U.S. There is simply too much money to be made. The one policy that has shown some potential for reducing drug violence in Mexico: legalization in America.

It’s time to learn the same lesson with other drugs that we were forced to learn with alcohol: Addiction should be treated as a public health issue, not a crime.  Alcohol prohibition didn’t end alcoholism or alcohol abuse, and it didn’t rid America of the “bad people” who consumed it.

There is no reason to continue believing that drug prohibition is any more likely to do those things than alcohol prohibition was. Rather than continually escalating the war on drugs into an actual war – President Donald Trump has even hinted at a military invasion of Mexico – let’s learn the lesson our great-grandparents did. Drug use is not inherently violent. Drug prohibition, however, is.

The drug market is going to exist no matter what hard-line policies President Trump and Attorney General Sessions come up with. The only question is whether it’s going to be a peaceful, legally regulated market or a vigilante-enforced black market. Jeff Sessions understands, if unwittingly, the problem with drug prohibition. Now he just needs to accept the obvious solution.

Adam Bates is a policy analyst with the Cato Institute’s Project on Criminal Justice.