Bye bye, Bernie: He's not fit to captain the Democratic ship if he can't stop chasing the great white male 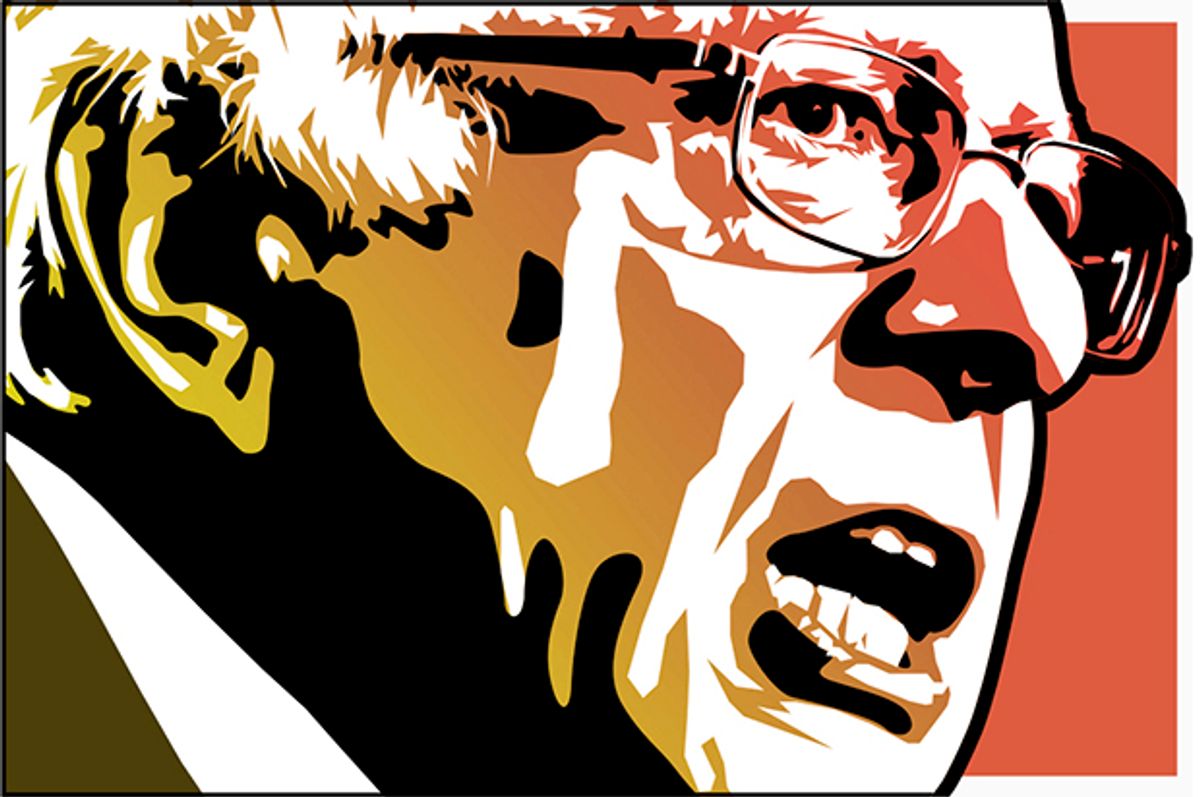 To the extent that Democrats are looking for their progressive soul, Sen. Bernie Sanders is not where they should be fixing their gaze. Sanders is clear that he is not a Democrat — except when he needs to be one in order to run for president. Yet he is demanding that the Democratic Party head for what Rebecca Traister last week called "third-way centrist bullshit."

Economic populism and what are commonly erroneously and dismissively referred to as "social issues" — such as reproductive rights, immigration reform and civil rights for people of color, those who have disabilities, people of all faiths, LGBT people and women — are indivisible. Sanders routinely demonstrates his own lack of progressive values by dividing them.

There is no economic populism without abortion rights and civil rights. No one can have economic justice if he or she doesn't have fundamental rights. Yet Sanders has made it plain that abortion rights are negotiable and brushes off "identity politics." He consistently argues that his values — and his alone — should define what it is to be progressive. (Which can't help but remind one of Donald Trump's unilateral defining of terms.)

Further, Sanders routinely divides matters of race and gender and class — which, again, cannot be untwined — by discussing the "pain" and needs of working-class voters and perpetuating the dangerous myth that the Democrats have ignored them. Sanders has insisted that Democrats have failed to reach these voters, while dismissing the fact that 75 percent of working-class voters of color voted for Clinton, not Trump, last year.

The Democratic Party, which has a deeply progressive platform and whose candidate won the popular vote by 3 million and lost the Electoral College tally by only 77,000 votes in just three states, need not look for its soul. Its soul is right there in its platform and its voters, not in Sanders' white-male dog-whistle rhetoric. The Democratic Party should not erase its voters and their clear message. By touting Bernie Sanders, however, who despite his momentary popularity was trounced in Democratic primaries by 3.7 million votes, it is doing just that.

Sen. Sanders, we are not the party of the great white male — nor should we try to be.

Democrats should instead focus on translating how inclusion translates into economic advancement and on addressing white racism, sexism and xenophobia — clearly major factors in the 2016 election. The party should focus, as Steve Phillips wrote in The New York Times, on "re-inspiring those whites who drifted to third-party candidates and then focusing on the ample opportunities in the Southwest and the South," where demographics favor the successful message of inclusion that the party championed last year.

The Democrats should, of course, also tighten their economic message and link it to the broader issues of identity, rights and opportunity and listen to and respond to voters disillusioned with corporate and special-interest money in our electoral process. They should do this work along with fighting against voter suppression — another major factor in the current electoral schema — and increasing voter registration and get-out-the-vote efforts while fighting the scourge of Republican gerrymandering. It is long past time to sideline Sanders and his irresponsible and divisive narrative of white economic populism and move into that critical work.

Sanders has most recently set out to define what it is to be progressive by refusing to campaign for Democrat Jon Ossoff in his contested congressional race in Georgia's 6th Congressional District. "He's not a progressive," Sanders told The Washington Post about Ossoff — who is pro-choice, supports increasing the minimum wage, is anti-war and supports immigration reform. Meanwhile, Sanders set off to campaign with Heath Mello, the Democratic nominee for mayor of Omaha, who has a strong anti-choice record including having introduced legislation restricting abortion, and was quick to call Mello a progressive.

With pressure mounting after much outcry from the public and the media regarding Sanders' active support of Mello, the senator subsequently endorsed Ossoff in his runoff, but continues to defend his support of Mello.

On numerous occasions Sanders has made it clear that to him, reproductive rights are negotiable. As feminist writer Jill Filipovic wrote last month after Sanders publicly said that Democrats should be flexible about candidates who aren't pro-choice:

[E]ven some on the self-proclaimed socialist left, like Sanders, now seem willing to sell out abortion rights in pursuit of the elusive vote of the working-class white man. There's no evidence that moving right on abortion will gain Democratic votes. But it's an appeal to the same dynamic Trump ran on: a bygone America, the symbol of which is the white factory man, able to support his children and a stay-at-home wife on the salary he earned doing good honest work with his hands.

Being pro-choice is not an optional part of being a progressive. Full stop. There is no justice for women, there is no economic justice for women, without the right to control their reproductive lives. The right to have an abortion is not a "social issue." It is an issue of fundamental rights; it is a matter of economic rights. One is not a progressive if not pro-choice. While there have been and will continue to be anti-choice Democratic candidates at every level, they are not progressives, and for Sanders to describe Mello as such is wrong.

While Mello claims that as mayor he would do nothing to obstruct choice, NARAL issued a sharp critique and response to Sanders' and Democratic Party leadership's campaigning for Mello.

"It's not enough to issue a statement for political expediency when your record is full of anti-choice votes," Ilyse Hogue, the organization's president, said in a follow-up statement. "The Democratic Party's support of any candidate who does not support the basic rights and freedoms of women is disappointing and politically stupid."

Further, we need to expect the Democratic Party to stand firm on its pro-choice platform and not lend national support to down-ballot candidates who are not pro-choice. We must refuse to debate choice again within the party. One hundred percent pro-choice is the only pro-choice position. One hundred percent pro-choice is the only pro-choice position. That is, abortions should be safe, legal, accessible, funded and available on demand — for all. Obviously, this position includes supporting the repeal of the Hyde Amendment, which prevents federal funding for abortion. Sanders historically has had a good track record on abortion rights, yet there is no mention of repealing the Hyde Amendment on Sanders' Our Revolution site.

Democratic National Convention chair Tom Perez, who has been traveling on a nationwide unity tour with Sanders, was quick to correct the Democrats' course and issued a statement clarifying that a woman's right to control her body was a "non-negotiable right" and that he would be meeting with women's leadership this week to "discuss how we can make sure our Democratic candidates and elected leaders are living up to these fundamental values." Since 58 percent of registered Democrats are women and since women overwhelming voted Democratic in this last election, it's outrageous that women leaders weren't met with before the unity tour began.

Come to think of it, why are there no women headlining the tour?

The Democratic Party appears to be, for now, following Captain Bernie in pursuit of his great white male voter while taking us girls for granted. After all, our choice is to stick with the Democrats or support the pussy-grabber-in-chief, right?

But this is not a time to take women for granted. Among many other reasons, we represent the majority of Democratic voters and we are leading the resistance. Despite our losses — and let's make no mistake, the Trump's win was a huge loss for women in particular — nevertheless, we persist.

We persist in spite of being told that too much attention has been paid to our concerns and that President Trump won because Hillary Clinton was too much of an intersectional feminist. In reality, as Chauncey DeVega succinctly captured it, "In total, Donald Trump managed to defeat Hillary Clinton in the Electoral College count because of FBI intervention, voter suppression, low voter turnout and possible Russian interference, in combination with sexism, racism and the fact that too many Democratic-leaning voters switched to third parties."

Just this weekend, Nate Silver clearly stated that the action by FBI Director James Comey just a few days before the election to raise issues about Clinton's emails that later proved irrelevant was a deciding factor in the outcome.

Despite all of this, cisgendered, heterosexual men are quick to explain why "identity politics" cost Clinton the election. So frequent is this occurrence, I have started using the term "Solnit's Law" — in honor of Rebecca Solnit, author of the book "Men Explain Things to Me" — to shut down conversations that include men's mansplaining to me how Clinton blew it and other "facts" about the 2016 election.

Solnit's Law — a version of Godwin's law — is that the longer a debate thread goes on, the more likely it is that someone will mansplain. Once the effect of Solnit's Law has been declared, the conversation ends and the mansplainer has "lost." Try it and see how often the conversation will end once Solnit's Law is called. It seems that men — including and especially Sanders — would rather blame inclusion for Clinton's loss than take a look at themselves, at sexism, racism and bigotry. Apparently it is easier to blame "identity politics" than to seek to change hearts and minds, in order to dismantle bigotry.

We women persist even though Sanders ignores the reality that Democrats did, as the Brookings Institution put it, "quite well among many economically marginalized American voters" and instead Sanders engages in what Brookings has called "pearl-clutching, end-of-days analyses about a party lost in the political wilderness" that "has driven many to ignore that reality."

As Eric Sasson said in The New Republic, blaming Trump's win on a failure of the Democrats to engage working-class voters "lets off the hook an entire class of voters who are at least as responsible for Trump's victory: middle-class and wealthy suburban whites, who also came out in droves for Trump and who make up a larger part of his coalition."

It's ridiculous.  Every Democrat — indeed, every American — has an ethical obligation to do what he or she can to bring about an end to Trump's regime and the Republican Congress that's perpetuating his power and agenda. Instead of pandering to Sanders voters, perhaps the Democratic leadership should make an appeal to them, not as a cry for the soul of the party but for the good of the republic.

Contrary to media outlets' portrait of this division as intraparty bickering — as they often do when Hillary Clinton supporters raise issues about Bernie Sanders — this is a fight for the soul of the party. There is no tactical reason to abandon women's rights and civil rights and every reason for Democrats to entrench more on these issues, now that our liberties are being revoked and under siege. It is upon all of us who care about the future of the Democratic Party, and indeed the nation, to say so.

Yes, strengthen our economic message. Yes, teach voters that social issues are economic issues — that there is no economic justice without reproductive freedom and individual civil rights. People who are not free to control their bodies and lives are not going to enjoy economic justice. But don't pander to a popular guy just because he's popular. Look where that got the Republicans. Look where that got the country.