"He didn’t change anything, not one line mark," says Gelila Mesfin, who first made Obama over as an Egyptian queen 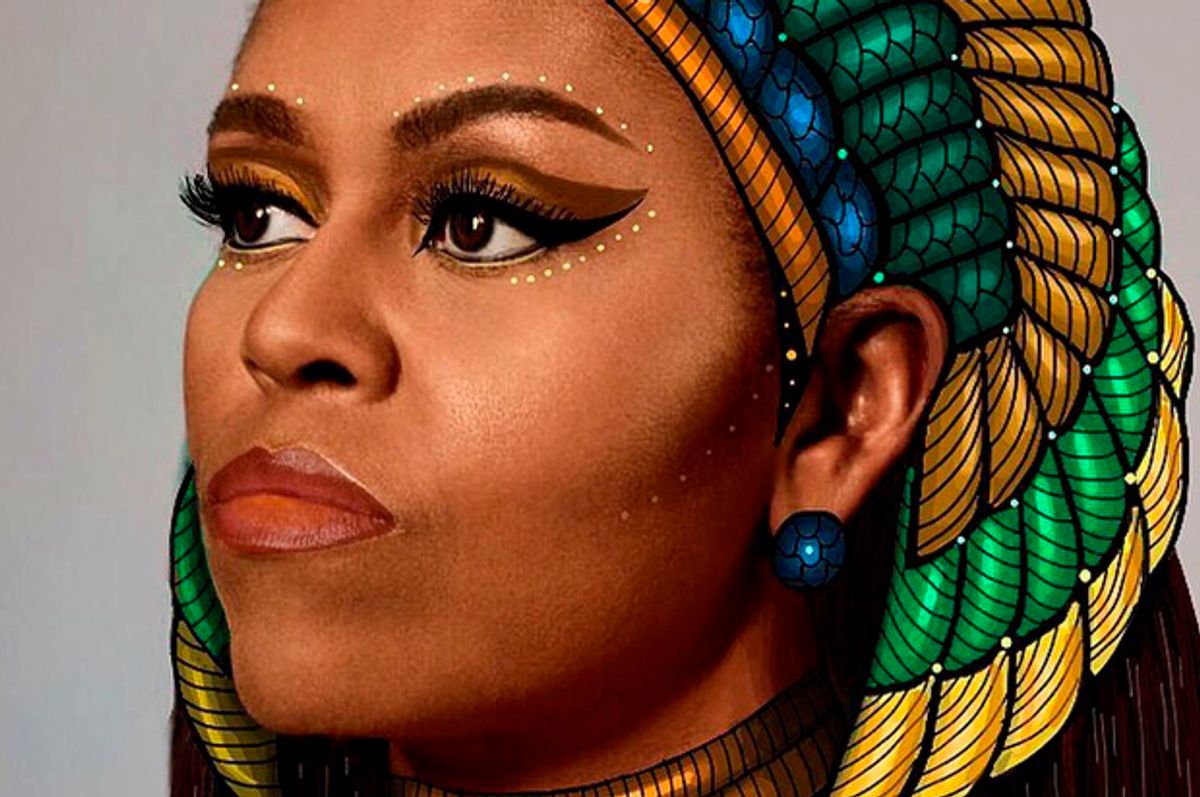 Over the weekend, Instagram and Twitter blew up over a beautiful image of former first lady Michelle Obama wearing the garb of an Egyptian queen. Chicago muralist Chris Devins painted the image on the corner of Chappel Avenue and 74th Street in South Shore, two blocks away from 7436 S. Euclid Avenue, where Obama grew up. He received close to $12,000 in donations to complete the installation. Devins told DNAinfo that he created the image to present Obama as he sees her — as an Egyptian queen.

Devins further defined his mission on his crowdfunding page on GoFundMe for the project: “The purpose of this mural is to give today's children someone they can literally look up to and to celebrate Mrs. Obama's life and accomplishments during the last 8 years as First Lady of the United States.”

That’s all fine and good. The image is beautiful and it will inspire kids. The problem is that it’s not Devins' image. He stole it from a young artist, Gelila Mesfin — one of the people he claims he wants to inspire.

Mesfin, 24, is an international graduate student from Ethiopia at LIM College in New York City. Her work has been featured in Essence magazine, among other outlets, and she has a sizable social-media presence, with more than 44,000 followers, which makes me wonder why Devins thought he could get away with blatantly taking her image of Obama and passing it off as his own.

Complicating matters further is Devins' public profile. Though the artist identifies as biracial, and has both black and white parents, many bystanders assumed from his selfies that he is white. Because there is a long tradition in American art and commerce of white men appropriating and stealing the intellectual and creative work of black women, the controversy immediately became part of a larger historical narrative.

I reached out to Mesfin through Instagram and we spoke by phone on Sunday. Her demeanor was very calm and patient, until she started explaining her work. At that moment, passion ripped through the phone. “Black women get put down a lot,” Mesfin said. “I want to put them in a positive light, and share the beauty of African and African American women.”

And that’s exactly what Mesfin’s work does. Her Instagram presence is full of beautiful images of poised black women, queenlike and draped in beautiful jewelry. Many of are celebrities, including musicians such as Destiny's Child and Ciara. She uses photos she finds online and alters them into her unique color-rich designs.

“I always tag the photographers of the photos I use,” said Mesfin. “The images are there to recognize the other artist as well.”

Mesfin said she would never use other artists' work with out recognizing them; even if she doesn’t know who a photographer is, she makes it known that she didn’t take the original photo, by illustrating the multiple stages of design on her Instagram account.

And Mesfin believes that artists should stick together, and crediting one another for their work is honorable, which is why she was so surprised when she read Devins' comments. “He didn’t change anything, not one line mark; he kept my color scheme and everything the same," she said. "But I didn’t get fired up until I saw his signature.” Mesfin posted a screenshot of the article on Instagram and a caption explaining how her work had been stolen. The post generated 3,892 "likes" and 742 comments.

How can you just steal someone's artwork... someone's hard work and claim it like it's yours... how can you go on record and say you designed this... this is so disheartening and so disrespectful on so many levels... like this man seriously created a gofundme page, raised money and did this... it's one thing to share or even profit from someone's work but to claim it as yours is just wrong! Thank you to those who DM and messaged me to let me know what was going on @dnainfochi you guys should take this article down because this man stole this. I wouldn't mind if he had given me credit or said he took the design from another artist but saying you designed it is just wrong! The man is a teacher for God's sake and said he was doing this to create positivity for his students and community... but he didn't think that stealing a young girl's artwork and making a profit out of it does more damage than good.   A post shared by G🐼 (@thick_east_african_girl) on Apr 21, 2017 at 6:13pm PDT

People from all over country chimed in, and Mesfin’s voice was heard. Devins reached out to DNAinfo, which edited its article to give Mesfin the credit she rightfully deserved. Mesfin commended Devins for contacting her as well trying to resolve the issue.

Devins has yet to apologize publicly. Despite that, Mesfin said she is still keeping him in her prayers. “I just want recognition for my hard work, and for him to admit that he was wrong.” Mesfin said. “People make mistakes.”