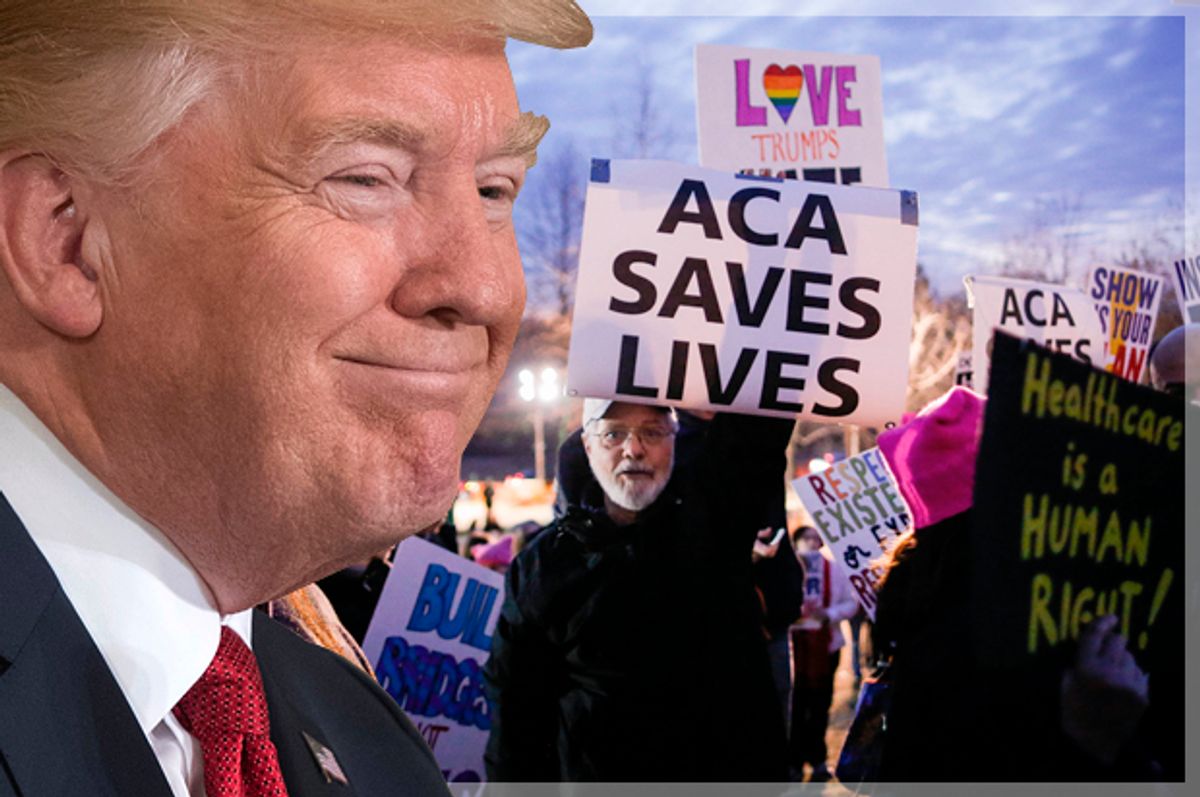 President Donald Trump’s ridiculous plan to repeal and replace the Affordable Care Act would be slightly less disgusting if we were confident that he knew what the hell he was talking about. Throughout the past two years, though, it’s impossible to point to a single instance in which anyone, including Trump's staff and supporters, could say that he totally nailed the nuances of the issue. Not once — ever.

Oh, and he said something about keeping the ACA's language about pre-existing conditions and “children living with their parents.” He noted the latter on a small, seldom-watched show called “60 Minutes,” despite the fact that there’s nothing in the law about covering kids who live with their parents. Yeah, it's one of the top two most popular aspects of the ACA, and he couldn’t accurately describe it:   The law allows adult children to stay on their parents' insurance until age 26 — regardless of where they live.

Perhaps Trump's ignorance about the law is allowed to slide because his supporters know even less about the ACA than he does. Though it’s not just when Trump talks about the ACA that he sounds like an eighth-grader bluffing his way through an essay exam. That describes everything he says about health care in general. The president who chose health care reform as his big legislative goal in his first 100 days doesn’t know anything about how health care works.

As part of his effort to resurrect a major legislative crash and burn, what’s been nicknamed “Trumpcare,” the president fielded a question last week about the status of his negotiations with the House Freedom Caucus, the far-right hotheads largely identified with members of the Tea Party.

During a joint press conference with the president of Italy, Trump said, “The plan gets better and better and better, and it’s gotten really, really good. And a lot of people are liking it a lot. We have a good chance of getting it soon; I’d like to say next week, but it will be — I believe we will get it, and whether it’s next week or shortly thereafter.”

Words have no meaning for Trump.

"It’s gotten really, really good” isn’t the language of a man who’s familiar with the details. In fact, he can’t say anything specific about anything related to health care, for two reasons. First, he just doesn’t know. Generally, the ongoing rule about Donald Trump is that he knows nothing. Second, the details of Trumpcare, at least in terms of what’s being discussed partly in secret, totally undermine his promises for universal, affordable coverage. Discussing those details out loud would expose the game. Oh and incidentally, “gotten really, really good” might sound familiar because it’s the same awkward phrase Will Ferrell once used in a George W. Bush parody video back in 2004 (check the YouTube clip at 40 seconds in). In other words, at least until recently, describing how things have “gotten really, really good” was merely a joke at the expense of stupid people. Now the actual president talks like that. Hashtag Make America Great Again.

Nevertheless, if Trump were to actually tell us what’s in the latest version of Trumpcare, he might have to acknowledge that there’s no legislative text; there’s no actual bill yet. Nothing exists on paper. He’d also have to acknowledge that this new iteration won’t be more affordable and indeed that many more people will be kicked off their insurance policies under the new “really, really good” version of Trumpcare than would have lost insurance under the now-defunct American Health Care Act.

The Washington Post’s Eugene Robinson called Trumpcare 2.0 “comically bad.” But that language understates the awfulness of what’s being debated. Robinson reported last week that proponents of this new version are claiming it would protect essential health benefits (covering things like “hospitalization, maternity and emergency care” according to Robinson) and protect people with pre-existing conditions.

But here’s the catch. States will be able to opt out of covering essential health benefits. We can assume most red states will opt out, not unlike the way they opted out of the Medicaid expansion, for no other reason than they hate Obama. Smart. (By the way, the new version preserves the slow phaseout of the Medicaid expansion.) States can also opt out of the pre-existing conditions language as long as they create “high risk pools.” Of course this is totally unacceptable because Trumpcare 2.0 doesn’t prevent insurers from charging dramatically higher premiums for people with pre-existing conditions — basically rebuilding the pre-ACA system of gouging and usury against people who need health care the most.

Making matters worse, especially in the near term, it appears as though Trump is planning to use subsidy payments to customers with existing ACA marketplace policies as potential ransom in the forthcoming battle over a potential government shutdown. To put it another way, if the Democrats don’t agree to support appropriations to build Trump’s ridiculous border wall, Trump will withhold subsidies for literally millions of ACA customers. That means Trump haters in blue states and, yes, Trump fanboys in red states, too. Everyone living below 400 percent of the federal poverty level will lose their subsidies unless the Democrats vote for Trump’s pointless wall, which (not insignificant) was supposed to be financed by Mexico.

If both sides fail to agree, the government will be shut down as of Saturday. So Trump is basically saying, "Yeah, I promised Mexico will pay for the wall. But now that I’m reneging on a major platform plank like the weasel I am, I’m going to hold the lives of millions for ransom." Yes, this is the bargaining position of the chief executive who pledged in his inaugural address to be the people’s president. America first, etc.

Again, we have no choice but to wonder whether Trump has even the slightest idea what’s at stake. Does he know how many of his red-blooded MAGA-hat wearing loyalists will lose their subsidies in this ludicrous cash grab for the border wall? Do his loyalists know? I doubt it. Does he even understand how and why the ACA subsidies are distributed? Does he realize how obvious it is that he’s entirely clueless about what will happen in a government shutdown or that his health care plan will lead to far worse outcomes than the current situation — even if the ACA marketplaces collapse, as he has predicted?

Does he know that the marketplaces are only a part of a more comprehensive pair of Obamacare-related bills containing critically important consumer protections, which are supported by majorities of Americans? No way. He knows none of it. It’s worth repeating this maxim because the more we internalize it, the more we embrace the horror, the better: Trump knows nothing.