"Feud: Bette and Joan" fades out: Old Hollywood may have been no match for the modern woman 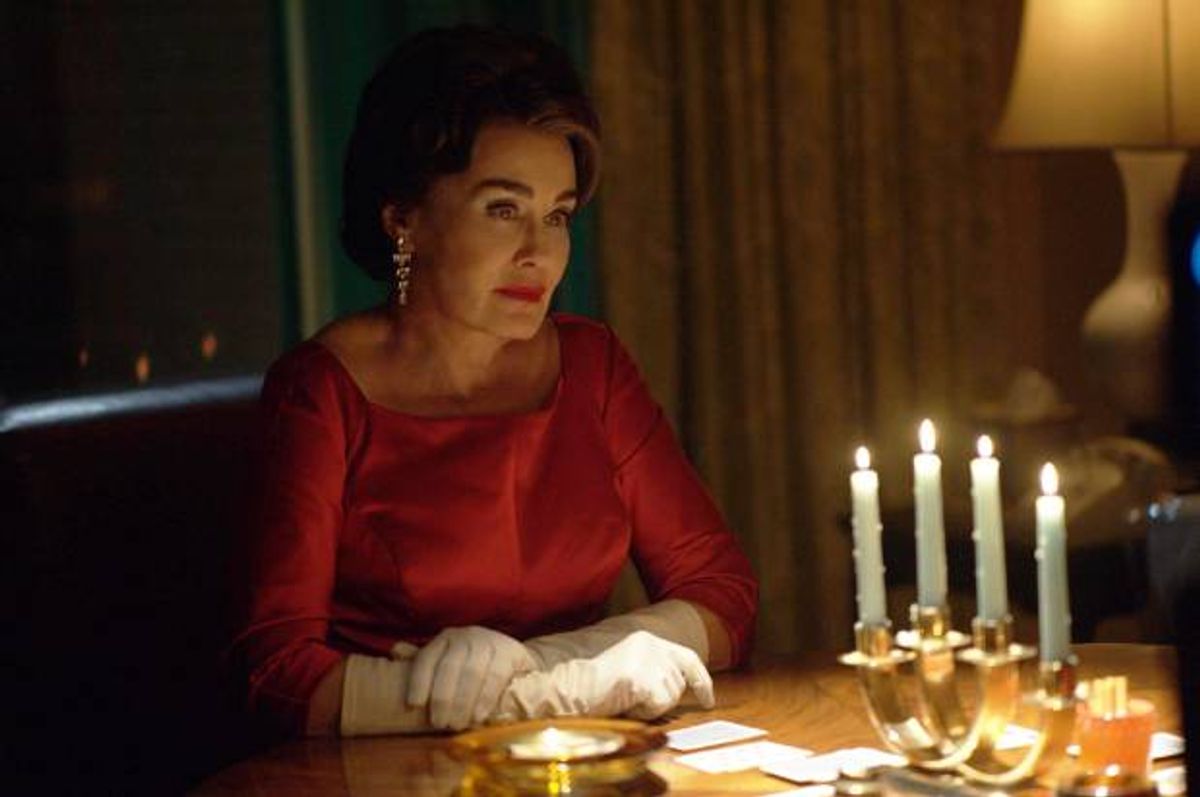 The role that got away from Joan Crawford was of Madame Curie. As depicted in FX’s “Feud: Bette and Joan,” Crawford, played by Jessica Lange, strolls into Louis B. Mayer’s office at MGM, slaps the script down in front of the studio head and confidently declares, “Either I play that egghead dame or I walk.”

That is in the early 1940s, when Crawford is at the height of her fame. According to history, “Madame Curie” ended up being released in 1943 with Greer Garson in the title role. And Crawford does indeed walk — after she is pushed out of the studio.

Skip forward to 1969, the middle of the women’s liberation era. In the midnight of her career, Crawford finally receives her chance to play a scientist named Dr. Brockton. This role is not a realization of her long-denied dream. Rather, it is the ignominious splat at the end of a long-career plunge. Dr. Brockton is a character in a 1970 sci-fi schlock film titled “Trog.”

That’s not even the final indignity Crawford suffers in the season finale of “Feud,” which aired Sunday night. After a bummer of a trip through the production — set to The Doors’ elegiac “The End,” to maximize the gloom of it all — Crawford’s story segues to a book signing for her 1971 lifestyle manual "My Way of Life.”

There the same sort of youthful crowd who breathed life into her flagging career by making “Whatever Happened to Baby Jane?” a hit in 1962 have lined up not to pay homage but to snicker at her antiquated wisdom. In that era, young women were concerned with demanding equal pay and respect in the workplace; when Crawford was their age, she had six of her molars removed so that her cheeks would curve in at a more elegant angle.

What tips does she have for the young ladies of the early 1970s? "I sit on hard chairs,” she says. “Soft ones spread the hips."  The book flops. “Trog” becomes Crawford’s final movie.

Decline can be such an ugly process that lacks grace when improperly managed, and few take joy in witnessing it. That’s why dedicating time to Crawford’s spiral downward may have encumbered the momentum of “Feud” in its final three episodes.

What else was there to do? Once the series gets past its dissection of the claws-out rivalry between Crawford and Bette Davis (Susan Sarandon) that exploded during “Baby Jane,” the tumble was all that was left. In spite of series creator Ryan Murphy’s finest efforts, “Feud” unravels for the same reasons that Davis and Crawford could never re-create the one-and-done magic they found in “Baby Jane.” What should have been classic in its appeal grew tiresome and lost its power.

Then again, our definition of what qualifies as classic is constantly shifting, and the explosion of movie and TV titles in recent years means today’s conversation pieces become dated more quickly and move from crusty to classic in no time flat.

Consider that at this point Laura Dern and Nicole Kidman, co-stars in HBO’s latest pop culture spectacle “Big Little Lies,” have each starred in films that today’s younger audiences would consider classic, as have Lange and Sarandon. To those viewers, Bette Davis and Joan Crawford probably aren’t classic. They are antique.

That may be part of the reason “Big Little Lies” muted the pop culture impact of “Feud,” which, like HBO’s miniseries, arrived on a tidal wave of rave reviews and supposition. The FX show’s title dangled the promise of camp and catfights week in and week out, and “Feud” fulfilled that as long as it keeps its focus on “Baby Jane.” But it soon melded its caustic humor into a more austere view of the toll that misogyny took on these women, transforming itself into a tough plot that little resembled the breezy ride its initial spate of colorful ads suggests.

When the series instead settled into a meticulous and purposefully created portraiture of vulnerable egos, vanity and marginalization, it reneged on its initial tease of an easy good time. The top notes of camp dissipated into its real goal of revealing the long-ranging and pervasive harm of systemic sexism.

Even now our image of Crawford is shaped by Faye Dunaway’s shrieking harridan in “Mommie Dearest” as opposed to Crawford's Academy Award-winning work in "Mildred Pierce." Thus, viewers showed up to “Feud” and expected to thrill at the harpy, and likely were surprised to see Lange make her into lonely, brittle bird of a woman, sharp beaked and vain, whose easily bruised ego and hunger for validation conspired to guarantee her unhappiness.

All Sarandon had to do was channel the leathery moxie of Davis, which she does completely — and that personality served Davis well in the end, given her ability to move with the times and accept her position as a grand dame. Even though Davis outlived Crawford, “Feud” allows her no victory lap. Davis’ legendarily clever, vicious quote to the Associated Press upon learning of Crawford’s death comes off more petty and hollow than humorous as delivered by Sarandon; the whole affair reeks of sadness.

“Feud” hits its outrageous, bitchy apex in its fifth episode “And the Winner is… (The Oscars of 1963),” one of two this season written and directed by Murphy, as the drama explores Crawford’s wickedly self-serving and ultimately successful machinations to sabotage her co-star’s shot at an Oscar.

Many viewers in the 18-to-49-year-old demographic have an intimacy with Murphy’s heightened style from “Glee” and “American Horror Story” and at first likely tuned in based more on their familiarity with him than with Davis or Crawford or classic Hollywood film. But many more turned their attention away from FX’s cutting, glittery look at the golden era of Hollywood to check out the modern-day beachside bitchery presented in “Big Little Lies.”

This theory bears out in the ratings: “Feud” opened with almost 2.26 million viewers and lost more than 42 percent of those in the 18-to-49 demographic between its first and second episodes. “Big Little Lies” opened more modestly, with an audience of 1.13 million, which tumbled nearly 39 percent in 18-to-49 demographic in the second episode’s airing — resulting in nearly as great an audience as that of “Feud.” The difference is that “Big Little Lies” regained its audience (receiving a 116 percent increase in the 18-to-49 demographic between its second and third weeks) and kept building. The April 2 finale raked in 1.86 million total viewers.

“Feud,” meanwhile, never recouped its losses in the 18-to-49 demographic or in total viewership, settling into a season average of 1.37 million viewers as it headed into its finale.

The difference? People were talking about the thematic content of “Big Little Lies” throughout the season — the story, the characters, the outlandish sniping. Precious few of us live like those fictional women in Monterey, California, but the series paints a picture of modern womanhood — the challenges of motherhood, the pitfalls of balancing parental responsibility and career, the dream of wealth and luxury — that viewers can relate and aspire to.

“Big Little Lies” creates new character boxes into which people can put their friends or acquaintances. You can be a Renata (Dern’s character) or a high-strung, well-meaning perfectionist like Madeline (Witherspoon’s) in the same way '90s girlfriends once campaigned to be designated the Carrie or the Samantha or the Miranda or the Charlotte of their group. (Although, honestly, who wants to be the Charlotte?)

It’s also important to remember that behind all its tasty, venomous bickering of “Big Little Lies” are executive producers Witherspoon and Kidman, and it would not have been such a tremendous success or perhaps even existed, without their names on the project. Sexism is still alive and well in Hollywood, but that’s a sign of influence neither Davis nor Crawford could flex.

Icons though they are, those actresses also represent a distant past, and they are singular creatures — battered ones at that.

“Feud” might have maintained some of its steam had it simply run for six episodes instead of eight and scaled down the Davis-Crawford rematch that occurred on 1964’s “Hush . . . Hush, Sweet Charlotte” in order to give its finale more of the running start it deserved.

The writing and its impeccably polished delivery by Lange and Sarandon have taken knocks for seeming too stiff and contrived. Then again, in a series seeking to channel the meter and style of classic film patter, contrivance is the point. But a viewer would have to have sufficient familiarity and affection for the era to embrace that.

And in that intersection where the entertainment industry meets imagination and memory, modern celebrity and concepts of glamour trump old Hollywood.

Maybe not always. As the final installment of “Feud” first aired Sunday, Crawford ranked as the 23rd most popular celebrity on IMDb’s STARmeter, giving her a higher rating than “Big Little Lies” stars Shailene Woodley (No. 44) and Zoë Kravitz (No. 85) or Kidman (No. 119) or Witherspoon (No. 145). According to this data-driven measure of celebrity, Crawford also outranks Davis, who clocked in at No. 70.

It’s tough to know whether Crawford would take any comfort in knowing that even now, her stardom outshines Davis, if only for a short while. From what we learn about her in “Feud,” she would probably be of the opinion that any extra time in the limelight is better than a permanent banishment to obscurity.  In that sense, sorrowful though as it is, the series does these screen idols one more service.