If at first you don't secede, try, try again 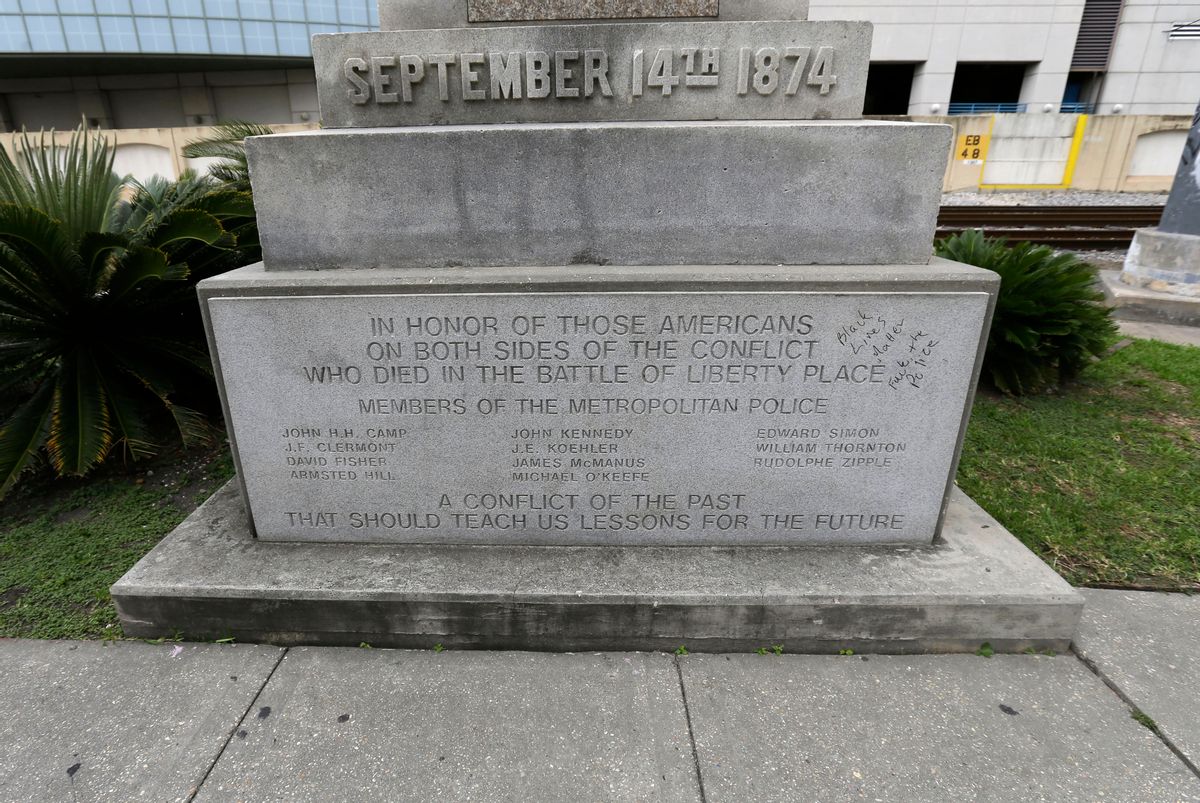 In this Sept. 2, 2015 photo, the inscription on the Liberty Place monument is seen in downtown New Orleans. Prominent Confederate monuments long taken for granted on the streets of this Deep South city may be on the verge of coming down and become new examples of a mood taking hold nationwide to erase racially charged symbolism from public view. Beginning the week of Dec. 7, 2015, the City Council will take up the issue of removing four monuments linked to Confederate history. (AP Photo/Gerald Herbert) (AP)
--

On Monday, Corey Stewart, a Republican running to become his party's gubernatorial nominee in Virginia compared people trying to remove state monuments to the Confederate States of America to the terrorist group ISIS.

"It appears ISIS has won," he wrote on his Twitter account. "They are tearing down historical monuments in New Orleans now too. It must end. Despicable!"

The Republican candidate's comments came the morning after workers wearing masks and tactical vests took down New Orleans' Battle of Liberty Place monument under the cover of night and surrounded by police sniper protection. The controversial removal was the first of four scheduled relocations of Confederate memorials in the city.

Stewart isn't likely to remove his inflammatory tweet considering that he's been running his entire primary campaign trying to appeal to angry conservatives who still pine for treason against the union.

Even weirder, Stewart isn't even from Virginia. He was born in Minnesota. And prior to his 2017 campaign, he wasn't even known for being a Confederate dead-ender. Instead, Stewart's persistent advocacy on behalf of racists seems to be more a cynical calculation that it's all he'll need to defeat the front-runner in the GOP primary, Ed Gillespie, the former chairman of the Republican National Committee.

As disgusting as the tactic is, it appears to be working.

Stewart got a huge amount of audience applause at a recent debate when he pointedly said, "I stand for our heritage," and linked his pro-Confederate position to a willingness to demand cuts in taxes and government spending.

"I know it's controversial and I know that a lot of weak-kneed Republican establishment candidates don't like it," he said. "But that's tough because I am not running to represent Ed Gillespie and all the other establishment, weak-kneed, weak-chinned, weak-jawed Republicans out there!"

At least one other Southern Republican appears to be making the same calculation that Stewart is.

A candidate from South Carolina running in a special election to replace Republican House member Mick Mulvaney, who is now serving in the Trump administration, has decided to make the Confederate battle flag her signature issue.

Sheri Few, condemned the top two candidates in her race for voting to remove the controversial flag from South Carolina's memorial for dead soldiers killed during the Civil War in her first campaign ad.

"They started a war on our history," Flew intoned, claiming that several efforts in other states to remove monuments to the secessionist effort have been successful because of her rivals.

"It's time for leaders to stand up and stop political correctness and fight for what we believe," she proclaimed in the ad titled, "Our history."

Democrats at Blue Virginia and elsewhere are chortling in glee.

"[Few] could be the one candidate whose nomination might give Democrats a remote chance in the June 20 general election in this solidly Republican district," notes Ed Kilgore, a former Democratic strategist who now writes for New York magazine.