A display of unbelievable ignorance: In a real country with a real president, Trump's AP interview would destroy him

Our president thinks the Pentagon is a company, terrorism was a recent invention and 9/11 was a ratings coup 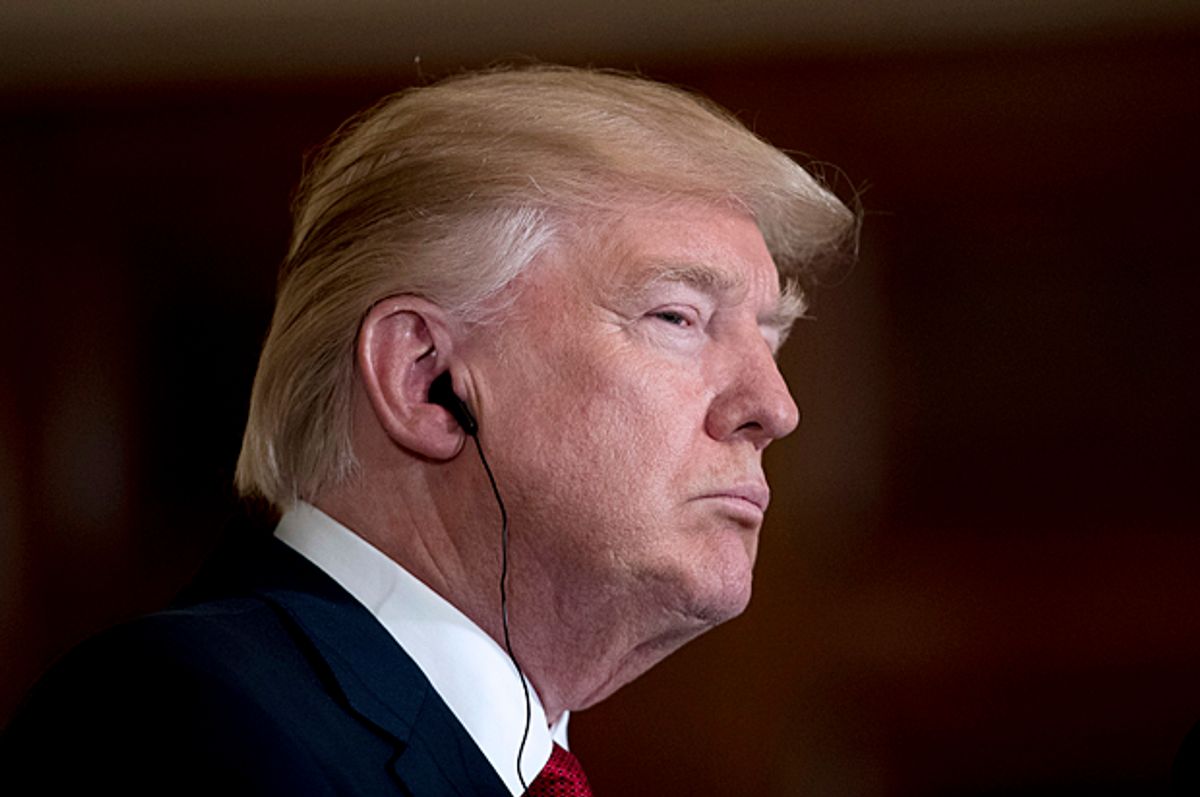 A new poll revealed that 98 percent of Donald Trump voters said they don’t regret their choice for president. It’s a number that’s simultaneously too difficult to believe and infuriating. By any reasonable account, whether from experts in presidential history or relatively nonpartisan commentators, Trump’s first 100 days have been an endurance test for the republic. His erratic, ignorant, deeply incompetent presidency is, day by day, causing damage — to the traditions of the White House and indeed to the spoken and unspoken rules that preserve our constitutional democracy.

At the center of it all is a chief executive who knows nothing. When he desperately avoids details by rotating through his mental rotisserie of superlatives (“very, very” or “tremendous” or “terrific” or whatever hyperbolic pitchman gibberish he’s trained himself to repeat), he comes off as an uninformed dolt, conspicuously avoiding questions with more vigor than he avoids strong gusts of wind. Conversely, when Trump struggles to repeat issue-oriented details, he comes off as a scattered, barely coherent toddler attempting to repeat something he heard at the grown-ups’ table and failing badly.

Both aspects of Trump’s ignorance were on mind-blowing display for his recent one-on-one interview with the Associated Press. It was a journey through the Hieronymus Bosch hellscape of Trump’s brain, and not even a legendary news outlet like the AP could decipher Trump’s incoherence — peppering the interview with more “unintelligible” parentheticals than an interview with Ozzy Osbourne.

Among other things, Trump delivered perhaps the best example of word salad since Sarah Palin’s “broken prompter” incident several years ago. In this quote, Trump elaborated on the responsibilities of the president, and whether he anticipated the gravity of the job.

Number One, there's great responsibility. When it came time to, as an example, send out the 59 missiles, the Tomahawks in Syria. I'm saying to myself, "You know, this is more than just like, 79 [sic] missiles. This is death that's involved," because people could have been killed. This is risk that's involved, because if the missile goes off and goes in a city or goes in a civilian area — you know, the boats were hundreds of miles away — and if this missile goes off and lands in the middle of a town or a hamlet . . . every decision is much harder than you'd normally make. [Unintelligible.]

This is involving death and life and so many things. . . .  So it's far more responsibility. [unintelligible.]

One of the responsibilities of being president is knowing exactly how many missiles were launched while attacking an airfield operated by a sovereign nation. Trump doesn’t appear to know for certain whether it was 59 or 79. The last time he talked about Syria, he told Fox Business Channel’s Maria Bartiromo that he had bombed Iraq. This is apparently something he does: He tends to forget details about whom he bombed and how many bombs were used. Incidentally, Syrian state media reported that the cruise missile strike did indeed kill a number of civilians, including four children.

Oh, and Trump apparently thinks that the United States government, along with the Pentagon and Social Security, are “companies” — two of the three largest companies in the world. They’re not. In any way. Governments and government agencies, at least in America, are not companies; nor do they operate anything like companies.

Furthermore, when I repeat the phrase “Trump knows nothing,” I’m not exaggerating all that much. Take, for example, his remarks about NATO in which he admitted not knowing what NATO was or how it operated.

They had a quote from me that NATO's obsolete. But they didn't say why it was obsolete. I was on Wolf Blitzer, very fair interview, the first time I was ever asked about NATO, because I wasn't in government. People don't go around asking about NATO if I'm building a building in Manhattan, right? So they asked me, Wolf . . . asked me about NATO, and I said two things. NATO's obsolete — not knowing much about NATO, now I know a lot about NATO — NATO is obsolete, and I said, "And the reason it's obsolete is because of the fact they don't focus on terrorism." You know, back when they did NATO there was no such thing as terrorism.

“Back when they did NATO”? What? I assume he meant “when they created NATO” but what actually came out sounded not unlike when you ask a child his or her age and the kid holds up five fingers and answers “this many.” Regarding the assertion about terrorism not existing when NATO was created, it's hard to know what to say. No, terrorism has existed since the dawn of civilization, contrary to Trump’s assumption that it’s somehow a recent phenomenon. Worse, he based his entire NATO platform — the idea that it’s obsolete and they have to pay up (for something, something, something) — on an answer he yanked out of his ass with the help of Wolf Blitzer, apparently.

This is the exact same reverse-engineering process Trump consistently uses as president. Here’s how it works: He blurts an array of gibberish on Twitter or during an interview, perhaps something he heard Steve Doocy say on "Fox & Friends." Then he and his staff turn said gibberish into an incoherent and ill-considered White House policy. Hence, his NATO posture.

Finally, if we lived in normal times and if the president were halfway normal, the following quote would have erupted into a major scandal — especially if the president was a Democrat. Trump, on the other hand, can apparently get away with madness like this:

Associated Press: And that's one of the difficulties I think presidents have had is that you can have these personal relationships with people from the other party, but then it's hard to actually change how people vote or change how people —

First of all, let’s be clear about something: Trump gets ratings because people tune in to hear him say crazy things. His ratings are largely due to the spectacle of watching a cartoon supervillain spouting random insults, some of which threaten to precipitate a war or worse. It’s the same reason why people slow down while passing traffic accidents.

That aside, bragging about having the biggest ratings since the worst terrorist attack on American soil ever should be enough to summarily drag the president's approval ratings as close to zero as possible. If the same nonsensical blurt, culminating in the 9/11 thing, had been uttered by former President Barack Obama, he probably would have been impeached, convicted and tossed in a federal prison. One last thing, not that it matters: The ratings audience for that Chris Wallace interview Trump mentioned was 2.3 million viewers, not 9.2 million. So he lied — again.

Nevertheless, 98 percent of Trump voters are supposedly cool with all  this. It’s difficult to make sense of this other than it's like the fandom surrounding sports franchises. No amount of losing will force superfans away from their favorite team, regardless of how awful they are. Hell, Philadelphia sports fans were mostly OK with it when the Eagles hired Michael Vick after he was caught torturing and murdering dogs for money. In the case of Donald Trump, however, the consequences are far more damaging — more than Trump voters will ever admit. But someday soon they’ll owe the rest of us an apology.