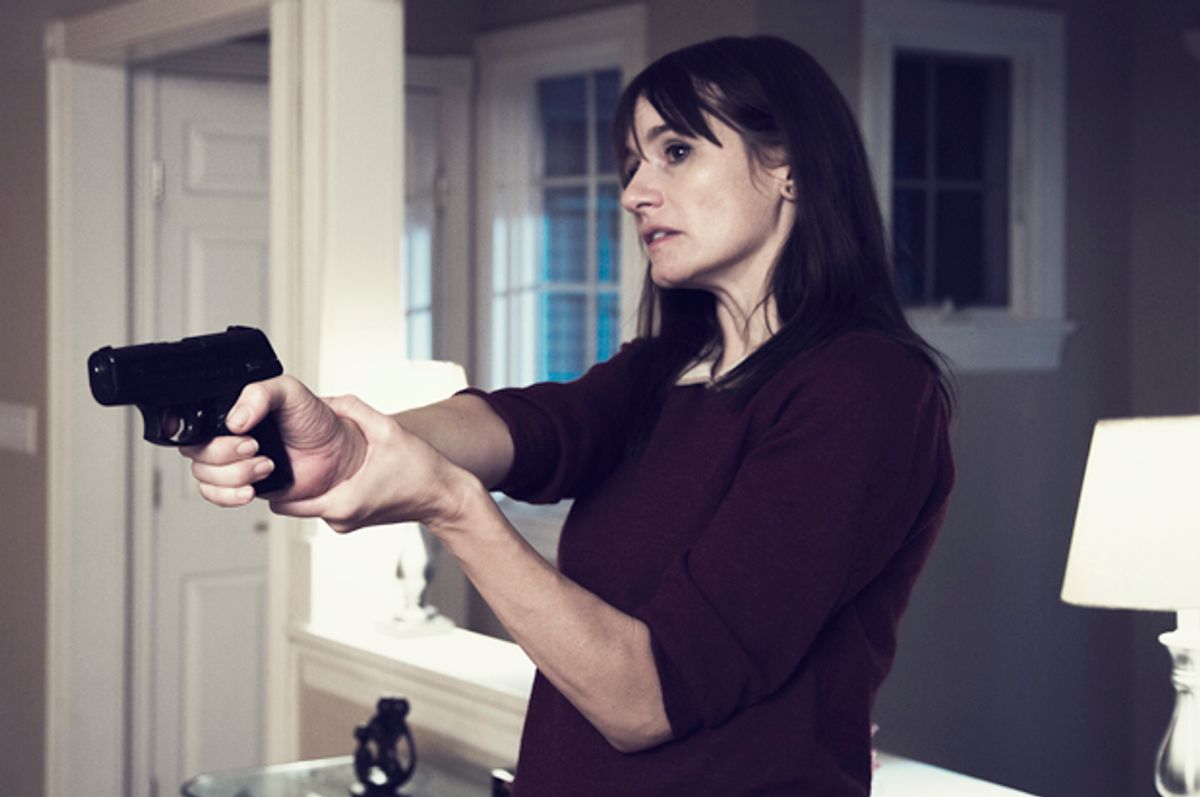 “Broken Night" is an eight-minute virtual reality short created by Alon Benari, Tal Zubalsky and Alex Vlack that allows viewers to go down different narrative paths during four different "choice moments" over the course of the story. All these pathways tell the story of a couple, played by actors Emily Mortimer and Alessandro Nivola, a couple in real life, returning home only to have their argument interrupted when they hear the presence of an intruder. Gunplay ensues. What actually happens in the story is a question of a character's traumatized memory and is also up to the viewer to determine.

VR storytelling is still a novelty, but at least in this case, the technique enhances the narrative rather than distracting from it. In effect, the viewer's choices — to follow one particular character (of two choices) at four critical moments — determine the action. For example, when the couple is fighting in the opening scene, viewers who follow one character will come to understand what the fight was about; following the other character keeps the reason for the fight ambiguous. Later in the short, the character one chooses determines who pulls the trigger in a violent confrontation.

The format is less "choose your own adventure" and more a litmus test for how someone engages with the drama. The choice moments are used to guide viewers: Which character is most interesting at a particular moment? Do you identify or sympathize with one character over another? What would you do in the same situation?

“Broken Night” prompts these responses because the virtual reality immerses the viewer in the action. The format is seamless and never feels "gimmicky."  Unlike other VR experiences, or equivalent videos, such as YouTube annotations, the entire short is filmed without edits. The camera used is an eight-lensed ball that records all 360 degrees of vision simultaneously so so different angles or points of view can be stitched together. In fact, the length of "Broken Night" is not a fixed commodity: The film can be anywhere from eight minutes to about nine and a half, depending on what paths viewers choose.

About 25 to 30 minutes of it was shot to create the various narratives and versions. The constraints of the technology are such that the creators can't know where someone is looking at any given time, so editing the film is impossible. (The actors had to repeat some scenes, with minor changes based on different narrative outcomes.)

“Broken Night” is dedicated to the belief that VR storytelling is the future. While this short is too large as a digital file to be downloaded to present-day phones, it is a step beyond Google Cardboard, or the VR videos on the New York Times' site. Unlike video games, which engage players at a relatively simplistic adrenaline level, the interactive qualities of "Broken Night" are more emotion driven. There is no "user interface" as such; everything happens as the watcher experiences it.

Hopefully, shorts like “Broken Night” will soon be available in a form people can access more easily. This week, at least, viewers can encounter this cool blend of technology and storytelling at the Tribeca Film Festival in New York.

Actors Emily Mortimer and Alessandro Nivola met with Salon during the fest to talk about shooting a virtual reality short, their marriage and the naughtiest things they might have done.

We know very little about the characters you play in "Broken Night," but they immediately grab our interest. We get to fill in a backstory about the reasons for their argument. Can you talk about creating the characters?

Alessandro Nivola: She’s had a history of psychological problems, and we’ve been dealing with that for some time.

Emily Mortimer: I thought you were saying that about me in real life!

Nivola: No, he asked about the character! This was a relationship where she’s had some history of mental disorder, so as they come in to the room in the beginning she doesn’t want to be left on her own. That sets the stage and that foreshadows the narrative of her being an untrustworthy narrator later on.

Mortimer: I feel we did all the research into our characters by just being married to each other for 17 years.

Nivola: As actors, you measure in dog years. So we’re at 75 years.

Mortimer: That was the easiest backstory to research I’ve ever had As far as mental illness or psychotic episodes, I felt we’ve all experienced to a greater or lesser degree moments where we kind of lost touch with the ability to be in control of what’s happening. My father was a criminal defense barrister, and he said that murder was the most human of crimes and that pretty much anyone could do it. He kind of liked murderers, compared to divorcing couples — they were the worst. Murderers also got rid of the one person on Earth who was bugging them, so they were quite peaceful.

Anyway, I was definitely thinking that this character wasn’t something a million miles away from me and not some raging psychopath, or gun-wielding woman. It was easy to tap into this moment in time where you lose a sense of how to be or what to do or how to respond.

How do you process trauma?

Mortimer: I don’t know. I think that’s the interesting question about virtual reality. This immersive experience is so extremely visceral and you really are there. Are they going to have to start treating people for post-traumatic stress after they have watched a film with a brutal rape or killing? You take your life into your hands as you put on these goggles and watch this film unfold.

There is a lot of physicality to your performance, Alessandro. Of course it’s stage fighting, but how difficult is it to do these scenes, which requires shooting the same scene multiple times the same way with slight tweaks?

Nivola: That was the most technical part of the whole process. Some elements of filming this feel more like real life than it normally feels making a movie because you don’t have half the room filled with equipment and people doing the lighting and standing there with sound booms. You have the room looking like the room looks, except for this little ball [that's the camera] in the middle of it.

It feels like you are in a real space, and that was a technical element that you don’t have to deal with on a regular two-dimensional film. This particular technology where the story fragments into two different strands at any given time — we had to make sure we landed in a certain place and as a conversation progressed, we had to move off in a direction and follow one or the other.

What would you do in the same situation, if there was an intruder in your house?

Mortimer: So weird that you ask that. I think about that all the time, and I don’t have an answer.

Nivola: Offer up whatever petty cash we have.

Mortimer: Call 911. We have a dog that is the most needy and neurotic creature in the world, but he does bark, and it drives you insane. He’d bark at anything and that would scare them away.

Nivola: He’d definitely scare any intruder away. He’s a white mini poodle. He’s like the rabbit in "Monty Python and the Holy Grail.”

Mortimer: I don’t think any intruders are going to get past Snowy.

Do you ever argue to the extreme degree that you do in the film?

Nivola: Does any marriage not?

My partner and I don’t argue. We’ve been together 20 years!

Nivola: You’re putting us to shame.

Mortimer: He would rather not fight. I need to fight.

Nivola: You like to get a little juice flowing.

Emily, what if any experience do you have with being interrogated by a policeman?

Mortimer: I pinched a policeman’s bottom once in Italy. It’s still the naughtiest thing I’ve ever done.

Alessandro, was it really the naughtiest thing she’s ever done?

Mortimer: It was the closest I ever got to being interrogated by a policeman. A car chase ensued. I was furious. I would have thought the policemen in Italy would have liked getting their bottoms pinched. He ended up chasing us through the Tuscan hills. My father’s friend was driving. [Laughs.]

Nivola: I was arrested for jaywalking in L.A.

Nivola: It actually happened. I was put up against the wall, my legs were spread and they frisked me. And they cited me. It was an empty street. There were no cars!