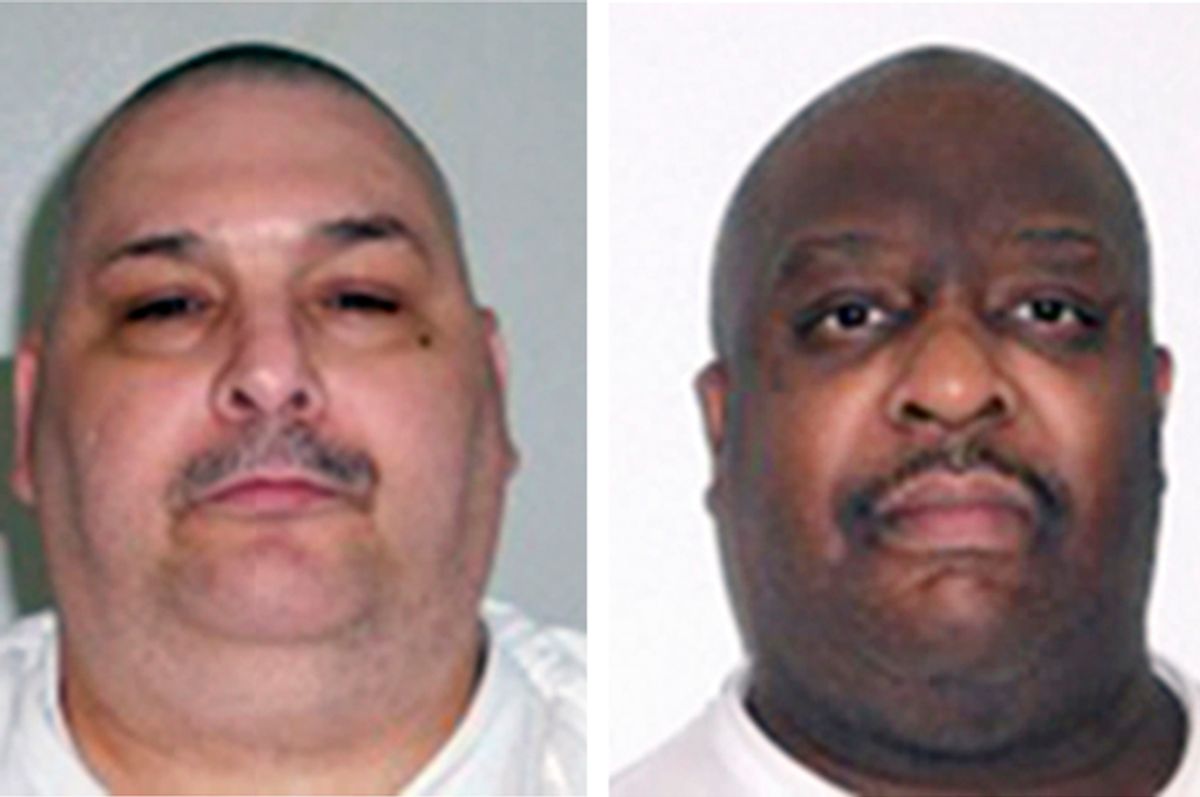 For the first time in nearly 17 years two convicted murderers were executed on the same night, on the same gurney, just three hours apart, as the state of Arkansas rushed to carry out a series of lethal injections before one of the required drugs expires.

Jack H. Jones Jr. and Marcel Williams were pronounced dead at Monday night 7:20 p.m. and 10:33 p.m., respectively. The executions took place in the death chamber of the Arkansas state prison, Cummins Unit. Four days prior convicted murderer, Ledell Lee, was executed. Another man, Stacey Johnson, was supposed to be executed on the same day as Lee, but was granted a stay.  Both Johnson and Lee maintained their innocence and a lack of DNA evidence, has created controversy surrounding Lee's execution last week.

The ACLU has defended Lee, condemning the use of Capital Punishment writing that an innocent man may have been killed. "None of the limited forensic evidence tested, like fingerprint analysis, at the time matched him. Ledell has been asking for DNA testing for decades."

Both Jones and Williams have admitted their guilt. In 1995 Jones beat, raped and strangled Mary Phillips, and subsequently choked her 11-year-old daughter until she lost consciousness. Before his execution, Jones apologized to the daughter of the woman he brutally murdered.

“I am not a monster; there is a reason those things happened that day,” Jones said, according to the New York Times. “I am so sorry, Lacey. Try to understand. I love you like my child.” He also released a written statement before his death.

Lacey Seal, who was 11 when she was beaten by Jones, released a statement to reporters saying “I am glad it’s done,” she said. “I’m glad that part of my life, that chapter, is closed," according to the New York Times.

Numerous appeals by Jones and Williams were rejected on Monday. Williams also had an appeal rejected minutes before he was scheduled to die. There were reports that Jones' execution may have had complications.

In a court filing, Mr. Williams’s lawyers wrote that infirmary workers had tried unsuccessfully to insert a central line in Mr. Jones’s neck for 45 minutes, before placing it elsewhere on his body. Then Mr. Jones gulped for air during the execution, the filing said, “evidence of continued consciousness.”

Associated Press reporter Andrew DeMillo, who witnessed the execution, stated that he saw Jones' lip move for around one to two minutes after the start of the exectuion. However, he detected no pain on Jones' face and said it was not clear if he was gasping for air or not, according to the New York Times.

When both executions were finished, a spokesman for Arkansas Governor Asa Hutchinson said the procedures were "flawless."

The executions involve an injection of three drugs, the first being the drug that was set to expire on April 30 — midazolam — never before used by the state of Arkansas.

Drugs for lethal injections have been increasingly hard for states to obtain because "drug companies have refused to sell their products for the purpose of executions," according to the New York Times. Midazolam is a sedative that's used to render a person unconscious, but has reported track records of not being effective enough.

For all the insistence from states and the courts that the drug is appropriate for executions, the man who created midazolam is disturbed that his invention has been adopted for lethal injection. “I didn’t make it for that purpose,” he recently told the New York Times. Anesthesiologist David Lubarsky, one of the original authors of the 2005 Lancet study, warns that the drug is “a very poor choice” for lethal injection, since even its maximum effect falls short of rendering a person completely unconscious. While states have upped the dosages in an attempt to ensure its reliability, the drug’s ceiling effect means it will make no difference past a point. And in places where euthanasia is legal, Lubarsky wrote via email, people have woken up even after receiving lethal doses of midazolam. Finally, he stresses, as has been true since the invention of lethal injection, in a three-part execution protocol “the paralytic hides evidence of the insufficient anesthesia.”