Neocons ride again! With Paul Wolfowitz whispering in Trump's ear — and claiming Iraq was not a failure — what fresh hell awaits? 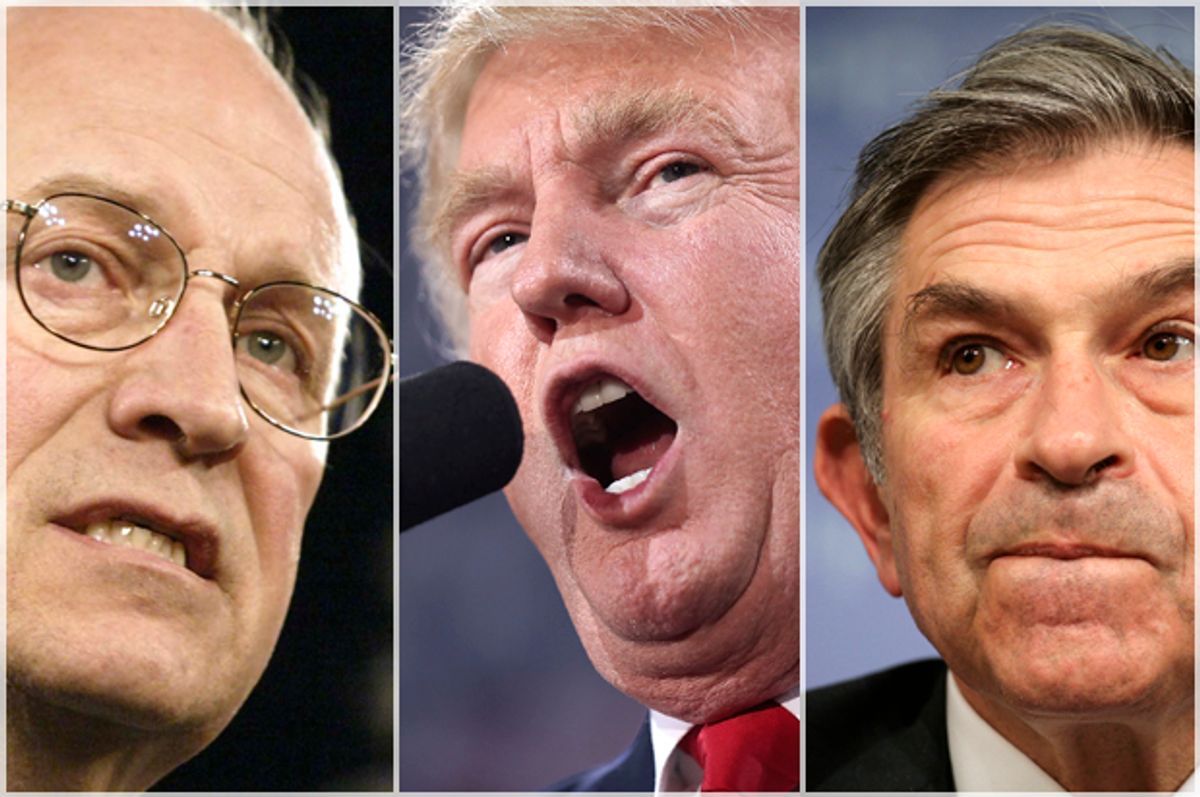 It was entirely predictable that as soon as President Donald Trump decided to drop some bombs on a Middle Eastern country, the neoconservative claque that had rejected him during the election would slither back into the GOP orbit. It's true that Trump himself had nixed the appointment of Elliott Abrams, the man the Republican establishment had chosen to be Rex Tillerson's right-hand man. That rejection had some people hopeful that Steve Bannon (whom Abrams blamed) would at least prove useful in keeping architects of the GOP's tragic adventures in Central America and the Middle East out of this White House.

Bannon, of course, is the nationalist enemy of neoconservative global crusaders like Abrams and former George W. Bush administration official Paul Wolfowitz. But it's always struck me how much they actually have in common in terms of temperament, if not ideology. Bannon is well-known from his propaganda filmmaking and Breitbart days as a trafficker in conspiracy theories. And Wolfowitz for years insisted that 9/11 had been a collaboration between Saddam Hussein and Osama bin Laden, largely based on a discredited book called "Study of Revenge: The First World Trade Center Attack and Saddam Hussein's War Against America" by a crank named Laurie Mylroie. They are both well-read and erudite conspiracy mongers who found their way into the most powerful offices on Earth.

Despite the obvious fact that Donald Trump is a torture-loving, "bomb the shit out of 'em" and "take the oil" kind of guy, his opportunistic distancing of himself from the Iraq War (despite evidence that he actually supported it) gave many people the impression that he wouldn't support military intervention. That included members of the neocon establishment, who were leery of him. But now they're back in the public eye, and one of the main architects of the Iraq War is once again making his presence known. According to Susan Glasser of Politico, Wolfowitz can take some credit for the action. In an interview with him she said:

Paul, you’ve jumped back into the fray as it were with what appears in hindsight to be an extremely well-timed intervention in the Wall Street Journal, saying Donald Trump should go ahead and do something in Syria, should intervene militarily in some way to respond to the chemical weapons strike. Miraculously enough, perhaps, he surprised much of the world by going ahead and taking your advice and doing so.

Wolfowitz modestly replied that he's not sure Trump took his advice but he's awfully glad he did bomb Syria because the U.S. is back in business:

I don’t think anyone would deny that he’s opportunistic, and I don’t think anyone would deny that he would like to be "the greatest president in modern times" or "huge" or you pick your adjective. And I think to achieve a Dayton-like peace settlement in Syria would not only be something that would be widely acclaimed, it would be hugely in the interest of the United States.

That does show a certain understanding of how to appeal to this president. But it's mind-boggling to believe he could ever be capable of brokering the kind of complicated agreement that Wolfowitz goes on to describe, in which every country, faction and religious sect in the Middle East would be involved (except Iran and Russia, which makes no sense at all.) Apparently Wolfowitz doesn't know that Donald Trump can't even hammer out a deal between Republican congressmen who voted for him.

Wolfowitz places a great deal of faith in Trump's generals, Defense Secretary Jim Mattis and national security adviser H.R. McMaster, to run foreign policy and guide Trump to the right conclusions. He is impressed that Tillerson told Vladimir Putin that lining up with Syrian president Bashar Assad is "lining up with a loser." Said Wolfowitz: "It may not get through any better than telling him that what he’s doing is criminal and immoral, but I think at least may resonate a little bit better with people around him." Apparently, Wolfowitz thinks Putin is Russia's Donald Trump, which is probably a wrong assumption.

The scariest part of the interview, however, involved Wolfowitz's views on Iraq. He seems eager to get right back into the quagmire and stay there. Mentioning in passing that comparing Iraq to Germany and Japan in the post-World War II period had been the wrong comparison, he said it should have been compared to Korea — where we still have 30,000 troops stationed 60 years later and war is threatening as we speak! Wolfowitz recalled the period after the Iraq "surge" with great nostalgia as a sort of golden era:

[W]e do have a model there. I think it’s a model that worked dramatically. When Ambassador [Ryan] Crocker was Bush’s last ambassador to Iraq and General Petraeus was there commanding the U.S. forces, the two of them — they had offices, I think, in the same building deliberately. I think every night they would go to [Nouri al-]Maliki when he was, I think the way they put it, too tired to fight back.

Wolfowitz said Petraeus and Crocker would tell him things about his own country he didn't know and would instruct him to fire this or that general and "stop these corrupt practices" that were going on in places around the country and it worked perfectly. If we don't go back in there and repeat that, Wolfowitz said, “the alternative is to let a very important, critical part of the world go to hell literally and lose American influence.”

This is a man who says in the same interview that "if we give up the Western idea of freedom, we’re giving up one of the most important diplomatic tools in our arsenal." It doesn't sound a great deal like freedom and democracy if a foreign government puts its generals in offices next door to the president so they can conveniently whisper orders in his ear when he's tired.

In other words, Wolfowitz didn't learn a thing from America's disastrous experience in the Middle East. Despite all evidence to the contrary, the neocons seem to think the Iraq War is a "model that worked." The smoldering wreck that's left in the region can be fixed up promptly with a few thousand troops and some savvy military leadership.

There's no reason to think that Trump is going there just yet. But with Bannon on the wane as an influence and Jared Kushner (who is more in sync with the neoconservative worldview) on the rise, that could change. These old neocon hands certainly have Trump's number anyway. On the day after the Syrian airstrikes, Elliott Abrams wrote in The Weekly Standard that the president had "finally accepted the role of Leader of the Free World."

They have good reason to be confident. After all, they got one president to invade a country that hadn't attacked us. Why wouldn't they believe they can do it again?