Trump isn't interested in real solutions to crime: His firing of Vivek Murthy is an attack on gun violence research 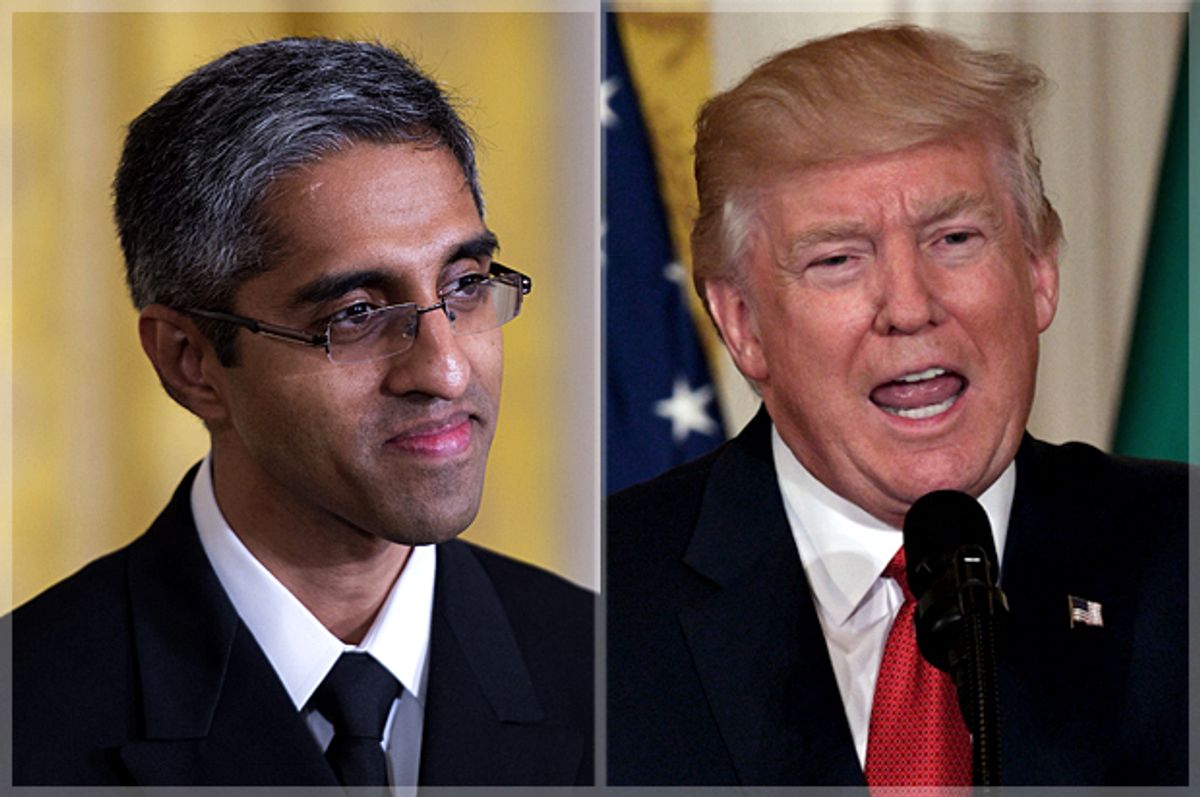 On Monday, I published a piece reporting on a fledging movement in the world of trauma surgery to revive '90s-era research efforts investigating the root causes of gun violence, from systematic racism to overly lax gun laws. Even though the topic is highly politicized, there was reason for doctors to believe that a series of mass shootings, renewed debate over firearm laws and the Black Lives Matter movement had helped create a social environment ripe for an increase of medical research attention to the causes of gun violence and possible methods of preventing it.

Unfortunately, as I was writing that article, news came out that Donald Trump had requested Surgeon General Vivek Murthy's resignation, a move widely seen to be a sign of Trump's hostility toward any discussion of gun violence as a public health issue. Dr. Murthy's wife, Dr. Alice Chen, told The New York Times that Murthy, who had more than a year and a half left in his term, refused to resign and had to be fired.

"Although it’s not unprecedented, it’s highly unusual for a surgeon general’s four-year term to be cut short," explained Daniel Politi at Slate. "What is known is that the gun lobby was no fan of Murthy, who has for years insisted that gun violence should be classified as a public health threat."

This move, announced on the same day that thousands around the nation demonstrated in support of empirical research during the March for Science, could have ramifications far beyond cutting Murthy's work as surgeon general short. This could also have a chilling effect on exactly the sort of research on gun violence that the University of Pennsylvania trauma surgeons I spoke with are trying to promote.

In my investigation for that piece, I found that the relative dearth of medical research about the issue of gun violence isn't just the result of doctors' distaste for addressing issues seen as political hot buttons. It also directly resulted from Republican efforts to squelch research on both the causes and consequences of gun violence.

As Todd Frankel of The Washington Post reported in January 2015, congressional Republicans were able, just with threats, to decimate nascent efforts to research gun violence in the 1990s.

The CDC had not touched firearm research since 1996 — when the [National Rifle Association] accused the agency of promoting gun control and Congress threatened to strip the agency’s funding. The CDC’s self-imposed ban dried up a powerful funding source and had a chilling effect felt far beyond the agency: Almost no one wanted to pay for gun violence studies, researchers say. Young academics were warned that joining the field was a good way to kill their careers. And the odd gun study that got published went through linguistic gymnastics to hide any connection to firearms.

The fear of political reprisal was so profound that researchers continued to shy away from the topic of gun violence even after President Barack Obama issued an executive order in 2013 that commanded the Centers for Disease Control and other scientific agencies under the Department of Health and Human Services to "conduct or sponsor research into the causes of gun violence and the ways to prevent it."

Republican threats to cut the CDC's funding in the '90s had a chilling effect on gun violence research for more than 20 years, not just in federal agencies but throughout the academic world. Medical researchers are bound to notice Trump's firing of a surgeon general who drew Republican ire because he noted, correctly, that gun injuries and deaths are a public health problem. That sends a message across the field that exploring the gun safety issue could mean drawing negative attention from powerful politicians — attention that could put careers in peril.

This is a particularly telling choice on Trump's part: It exposes, beyond any shadow of a doubt, the emptiness of his claims to be tough on crime. On his own and through his attorney general, Jeff Sessions, Trump has pushed a message — not backed up by empirical data — that the nation is awash in violent crime, and that harsh measures, including further expanding our already oversize prison population, is the only answer.

While violent crime has fallen 50 percent over the past couple of decades, there is still a problem with firearm violence — including accidents and suicides, as well as homicides — and that problem needs fixing. Now Trump has dismissed the one member of the administration who was interested in talking about the actual, real-world causes of violent crime.

The conclusion is clear: Trump isn't really interested in preventing crime. Indeed, the president understands crime less as a complex societal problem with multiple causes and more as an opportunity for demagoguery and an excuse to push for policies that exacerbate racial tensions and reinforce inequality.