"Turning an F to an A": Here’s how late-night TV celebrated Trump's first 100 days 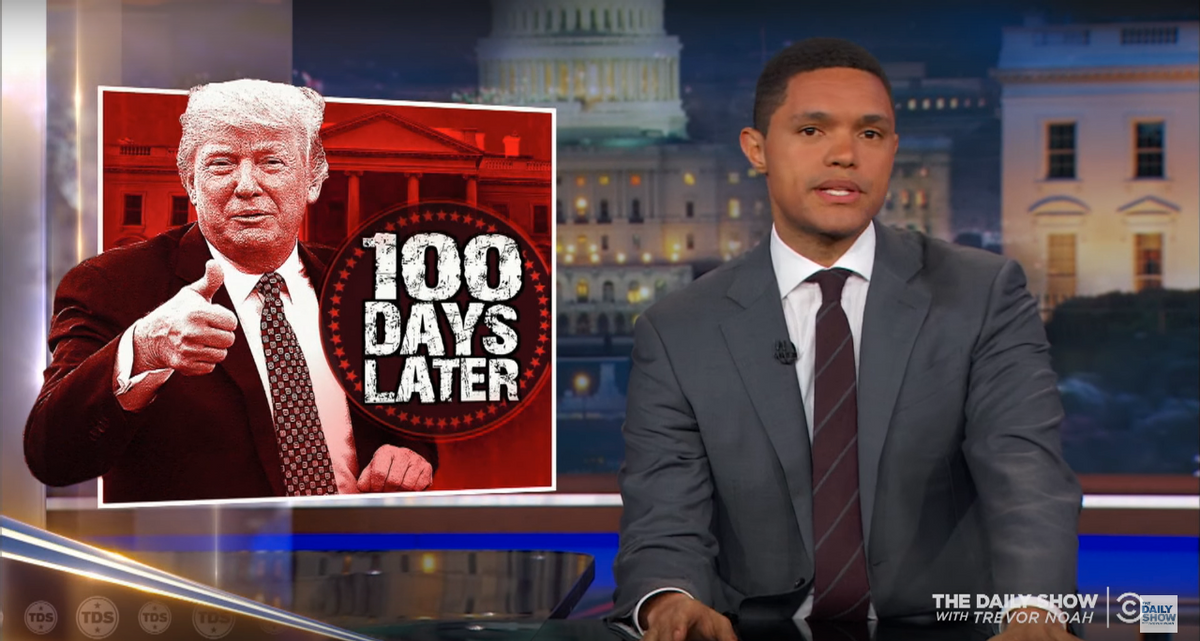 For how exhausting and frantic the new administration's first 100 days has been, President Donald Trump hasn't accomplished a whole lot since he was inaugurated. Some of the late-night hosts on Monday were downright gleeful recounting Trump's failures the past three months.

"Trump has ignored  a lot of presidential traditions," he continued. "You know, like releasing tax returns, or working on the weekend or knowing about government. But even he has been all about the 100 days."

"I bet George Washington was like, 'In the first 100 days, I will mail this letter to Congress!'" Noah joked.

Stephen Colbert led his monologue on "The Late Show" with the 100 day trope, focusing his attention Trump's performance thus far.

"The first 100 days are traditionally a time to reflect on accomplishments of a president," Colbert said. "And Trump hasn't got a lot of those.
He still hasn't filled his Cabinet. He didn't repeal Obamacare. There are still Muslims."

"But he did sign a law that making it easier to for mentally ill people to buy guns and for hibernating bears to be hunted," he added. "So, took care of his base. Insane people who want to murder Yogi."

Colbert then showed a recent tweet from the president, which seemed to suggest that he was trying to downplay expectations for his first 100 days.

No matter how much I accomplish during the ridiculous standard of the first 100 days, & it has been a lot (including S.C.), media will kill!

"You must be wondering what what 'S.C.' could mean," Colbert said. "Could be Supreme Court. Could be Spicer catastrophe. Could be Sarah Connor. Could be Stephen Colbert. I got to say, Donald Trump has done a lot for me my first 100 days."

"Yeah, the 100 day report card is an arbitrary, meaningless political milestone that most people don't actually care about," Meyers said. "Most people, that is, except Donald Trump."

For his "Closer Look" segment, Meyers tried to pin Trump to this 100 days standard, mostly because during the campaign Trump promised to change the world by day 50.

"Just like any terrible student, Trump is trying to turn his 'F' into an 'A,'" Meyers said.