David Brooks claims we face a "crisis of Western civilization" — maybe so, but he doesn't understand it 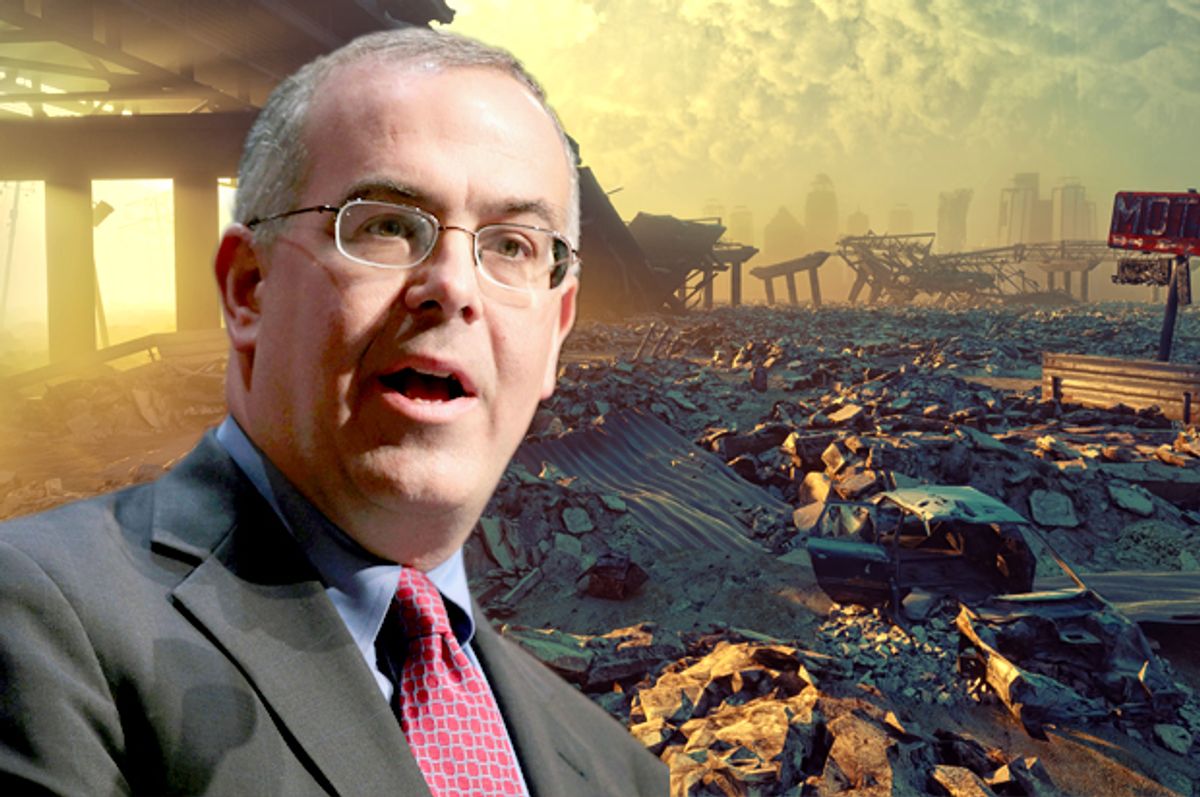 Western civilization is in grave danger — or at least that’s what everyone keeps telling us. We hear this refrain from people ranging from alt-right lunatics fulminating about “cultural Marxism” on YouTube to Republican politicians like President Donald Trump and Rep. Steve King of Iowa — who last month provoked controversy after declaring, "You cannot rebuild your civilization with somebody else's babies.” Not to mention systems scientists warning of impending economic and ecological disaster.

Spenglerian angst has become fashionable again almost a century after the prophet of doom, Oswald Spengler, wrote his influential book “The Decline of the West,” and it is hip and trendy in 2017 to cynically prophesy the coming collapse of Western civilization.

The latest figure to jump on the bandwagon was everyone’s favorite purveyor of milquetoast centrism, The New York Times’ very own David Brooks. On Friday Brooks published a column titled “The Crisis of Western Civilization,” in which he traces the current “crisis” back a few decades to when people, “especially in the universities, lost faith in the Western civilization narrative” and began to believe (and learn) that “Western civilization is a history of oppression.” According to Brooks, this shift in college curricula is now catching up to us:

Now various scattered enemies of those Western values have emerged, and there is apparently nobody to defend them. The first consequence has been the rise of the illiberals, authoritarians who not only don’t believe in the democratic values of the Western civilization narrative, but don’t even pretend to believe in them, as former dictators did. . . . More and more governments, including the Trump administration, begin to look like premodern mafia states, run by family-based commercial clans.

Of course, it wouldn’t be a true David Brooks column without his also bemoaning the “collapse of the center” and the rise of “fringe parties,” along with the collapse of “liberal values at home” and the emergence of those “fragile thugs who call themselves students.” In conclusion, Brooks ominously cited a study published in the Journal of Democracy earlier this year, which postulated that the percentage of young Americans who said it is absolutely important to live in a democracy has fallen drastically over the past 80 years.

As Erik Voeten pointed out in The Washington Post, this is an extremely misleading claim. The original World Values Survey data concerned asking people to place themselves on a 10-point scale with 1 indicating that living in a democracy is “not at all important,” and 10 indicating that it is “absolutely important,” and a popular graph from the referred-to study “treats the people who place themselves at 1 as having the same commitment to democracy as those who answer 9.” (Almost none of the respondents actually answered 1.)

The great irony of Brooks’ piece, of course, is that the “illiberal authoritarians,” whom the author denounces as enemies of Western civilization — that is far-right populists like Trump and French presidential candidate Marine Le Pen — are also the ones who purport to be its true defenders. Indeed, the entire “alt-right” is a reactionary movement established on the idea that Western culture is being attacked by both internal and external enemies (and for white supremacists like Richard Spencer, Western culture and whiteness are more or less synonymous).

At last week’s demonstrations in Berkeley, California, where alt-right extremists and “antifa” protesters came to blows, Shane Bauer of Mother Jones reported one alt-right protester wore an American flag over his face and claimed to have come there to “defend Western civilization,” while a group of self-proclaimed “Western chauvinists” were led by Gavin McInnes, a co-founder of Vice magazine. Although Brooks would no doubt reject any comparison to these unseemly characters, he seems to share their contempt for rowdy college students who haven’t read Allan Bloom — namely, “fragile thugs” and “Social Justice Warriors.”

The alt-right considers college students who espouse feminism and LGBT rights as the true enemies of Western civilization besides Muslims and Mexican immigrants. It's not surprising that there is an elaborate conspiracy theory that goes along with this antipathy and paranoia. It is an anti-Semitic (and anti-intellectual) conspiracy theory which posits that 20th-century intellectuals from the Frankfurt School — who all happened to be German Jews and Holocaust survivors — founded what is called “cultural Marxism” to overturn traditional values by promoting things like homosexuality and political correctness, with the ultimate aim of undermining Western civilization (Not coincidentally, the Nazis had an almost identical conspiracy theory in the 1930s known as “cultural Bolshevism”). The popular YouTube vlogger and editor of Infowars.com, Paul Joseph Watson, recently promoted this unhinged conspiracy theory in a video screed railing against American popular culture:

From the 20th century onwards, postmodernists, moral relativists, critical theory-espousing cultural Marxist nihilists began to seize control of society. Postmodernism seeks to erase the distinction between high culture and popular culture. They want to turn everything on its head.

The goal, continued Watson, is to “completely undermine the foundation of Western civilization and leave us open to subversion and capitulation.”

Though many American viewers are apparently convinced that Watson knows what he's talking about because of his flamboyant British accent, it is clear he has never actually read any of the “critical theory-espousing cultural Marxist nihilists” he claims to despise. If he did, he might be surprised to learn that they were big fans of Western civilization. “I believe that Europe and America are probably the best civilizations that history has produced up to now as far as prosperity and justice are concerned,” once said Max Horkheimer, the de facto leader of the Frankfurt School. “The key point now is to ensure the preservation of these gains. That can be achieved only if we remain ruthlessly critical of this civilization.”

If Watson decided to pick up a book and step away from YouTube and Twitter for a moment, he might also be surprised to learn that the critical theorists were just as critical of America’s vapid and vacuous popular culture as he is. Indeed, Horkheimer and Theodor W. Adorno, perhaps the Frankfurt School's best-known theorist, coined the disparaging term “culture industry” to describe what they saw as a vast apparatus dedicated to pumping out mindless entertainment like a giant factory might. The culture industry sought not only to make a lot of money but also to keep the people distracted and apathetic. (In other words, it was a modern “opiate of the masses.”)

In his video, Watson goes on to identify reality TV and the narcissistic personalities who infest the genre as a product of "cultural Marxism" — which is more than a little ironic, considering his favorite politician is a narcissistic reality-TV star. (Perhaps Watson and his narcissistic colleague Alex Jones should investigate whether President Trump is part of the cultural Marxist conspiracy). While Watson blames the emergence of reality TV on cultural-Marxist bogeymen, critical theorists do not stoop to anti-intellectual or anti-Semitic conspiracy theories and would point out to Watson that reality TV is a profitable business venture that helps keep millions of Americans distracted from the fact that their incomes have stagnated over the past 20 or 30 years while CEOs' paychecks have skyrocketed.

This brings us to the real cause of what Watson and Brooks and many others perceive as the decline of Western civilization: free-market capitalism. Over the past century Western culture has changed tremendously in good and bad ways; we have become more inclusive and tolerant as a society, yet at the same time increasingly superficial, materialistic and self-absorbed. The market mechanism has played a crucial role in this transformation. And while growing tolerance and inclusiveness obviously are a result of the liberation movements of the 20th century, the market was not particularly resistant to these movements. Modern capitalists are, for the most part, equal opportunity exploiters — and consumers are consumers, regardless of their race, sexuality, gender and so on.

At the end of the day, the collapse of Western civilization — and perhaps all of civilization — is less likely to be a consequence of cultural factors than economic and ecological ones. Indeed, just a few days before the Brooks column was published, the BBC posted a noteworthy article titled “How Western civilization could collapse.” According to the computer models of system scientist Safa Motesharrei, the leading factors will likely be “ecological strain and economic stratification.”

Under this scenario, the BBC’s Rachel Nuwer wrote, “elites push society toward instability and eventual collapse by hoarding huge quantities of wealth and resources, and leaving little or none for commoners who vastly outnumber them yet support them with labour. Eventually, the working population crashes because the portion of wealth allocated to them is not enough, followed by collapse of the elites due to the absence of labour.”

This sounds more like Karl Marx than Oswald Spengler, and it indicates that it will be people like Donald Trump — rather than Syrian refugees or irritating Social Justice Warriors on Tumblr — who will bring about the end of Western civilization. It also demonstrates how badly we need more thinkers like Adorno and Horkheimer today, and fewer YouTube conspiracy theorists and clueless Beltway columnists.