Zachary Quinto on his Tribeca comedy "Aardvark": "It's a film about people who are lost to themselves"

In a non-Spock indie comedy, Quinto plays a loner facing an unusual mental condition — and a disastrous therapist 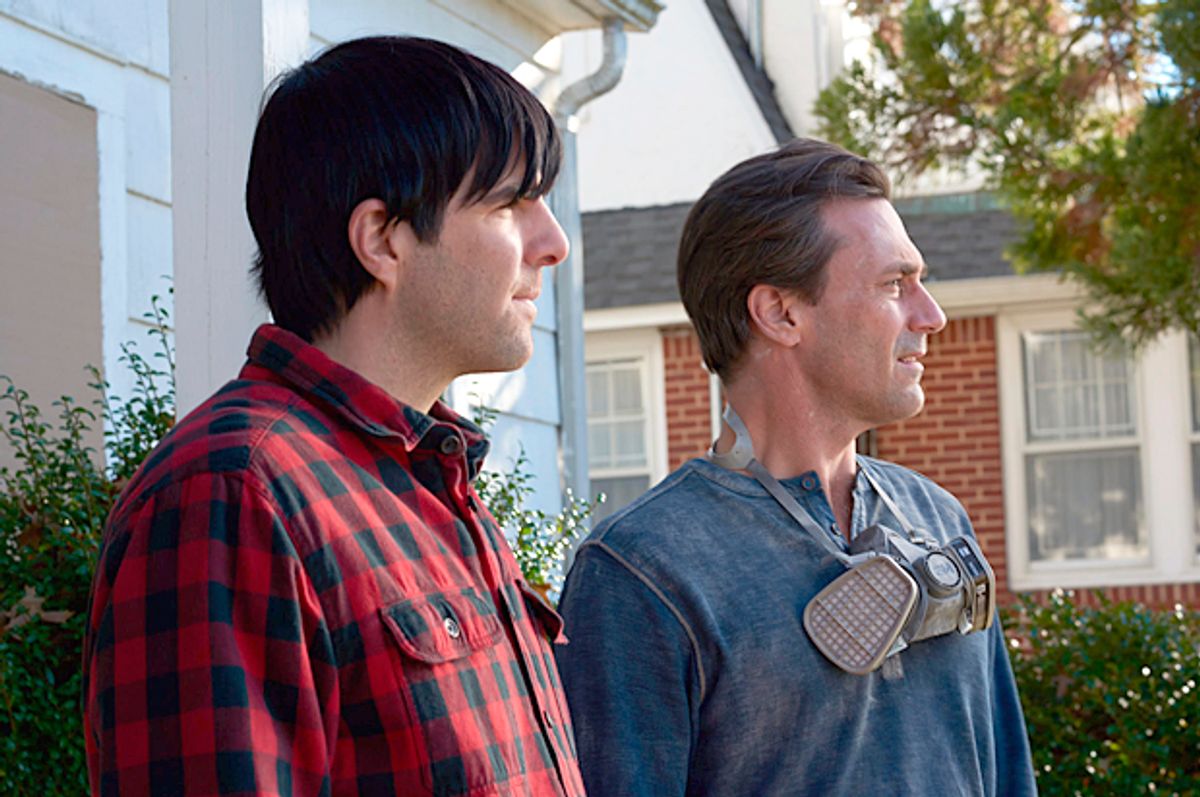 Zachary Quinto and Jon Hamm in "Aardvark" (Before The Door Pictures)
--

Zachary Quinto, perhaps best known as Mr. Spock in the "Star Trek" reboot films, produced and stars in the new comedy “Aardvark,” written and directed by Brian Shoaf and that just premiered at the Tribeca Film Festival. Quinto plays Josh, who goes into therapy with a social worker named Emily (Jenny Slate). Josh suffers from an unusual condition that involves his envisioning his brother, Craig ("Mad Men" star Jon Hamm), who is an actor, in various guises from a bag lady to a police officer. Then when Craig returns home to settle a real estate transaction, he ends up becoming romantically involved with Emily.

“Aardvark” is a comedy, but the humor is more brown than black, with deadpan moments and some satirical bits in between the awkward, uncomfortable and melancholic scenes. Shoaf makes an auspicious debut, and Quinto gives a striking performance as Josh, showing his sad-sack side but also making his character's empowerment quite credible.

Quinto and Shoaf met with Salon to chat about “Aardvark” at the Tribeca Film Festival.

Why an aardvark, and what is your power animal?

Brian Shoaf: I didn’t know much about the aardvark itself. We had a script before we decided to call it “Aardvark.” Then I started to learn more about them. It sounds backwards, but “Aardvark” was a working title. It would be at the top of the video on demand list. Then I learned more about the animals themselves, and in the spirit, power animal world, there is a lot for Josh to connect with there. In the tree of life, they have their own branch. They have no living genetic cousins. They are not related to anteaters, armadillos, sloths or anything else you might think. They spend most of their lives underground.

We already had the story about the zoo in the script, so it felt like why not show this bizarre animal that people don’t know much about? Aardvarks are much bigger than people think. It's the size of a German shepherd.

It’s very cute in the movie.

She gave a brilliant performance. There was 10 minutes of the camera trained on her [cave], and then she finally emerged. But enough about the aardvark.

Zachary Quinto: An owl. I love owls, all different kinds. I have a house upstate, and there are owls in the surrounding woods. I love animals in many different ways, and I feel connected to animal energy. It certainly can be valuable in different aspects of spiritual pursuit, emotional work and certainly in acting as well. I do agree with Brian about Josh’s energetic connection to an aardvark. He’s solitary, isolated and subterranean in a way. Josh is someone who has to stand up and defend himself, and fight to survive and fight to hold on to some grasp of reality, which is admirable.

Can you talk about therapy, which in the film is treated both sensitively and satirically? It’s deadpan and funny, and it explains a lot about the characters in how they behave and interact.

Quinto: I like what it explores about Emily. I like this idea of a therapist who is entirely ill-equipped to help the patients she so desperately wants to help. But I also think it’s a question of how much of her motivation to help her patients is an endeavor to help herself. I think she realizes that she’s a little bit out of her depth with Josh, and yet she charges forward anyway. I like the dynamic of Emily and Josh, and Emily and Craig. It gets messy. It gets complicated. The fallacy about therapy and relationships is always very cut-and-dry and clean.

Well, good therapists are best when they guide you, not solve your problems.

Quinto: I think that’s true. I’ve been in therapy for over a decade. I love it. I think it’s [an] enormously powerful tool in life to go deeper and expand my understanding of myself and the world. I feel  grateful to have the time and the resources to do it. I know not everybody does. I’ve taken advantage of that. I am deep in it. I’ve been with one therapist in L.A. for six and a half years, and then another for two and a half years, and a person I see here in New York for four years. For me, it’s important. I don’t think I’d be as available to my experiences and my relationships. Luckily, my therapists have all been really good.

Shoaf: The times that I’ve been in therapy have been helpful for me, but it’s hard for me. I was very frustrated in the past by my inability to strike up a rapport with a therapist. They are trying to set a boundary, and I wanted to push past that. So I wanted to write about a therapist who asked a lot of questions, and that’s one of the theatrical conventions here. A lot of times, therapists just nod and smile, as Craig says they do. Emily has a question for everything. Her process for going deeper is very quick.

Feeling that my therapists weren’t curious about my own life was frustrating. But with Emily, who is very curious, it goes south almost immediately. From the first scene, when she says, “Your brother’s an actor; would I know him?” she’s probably already doomed. That’s why ultimately, I hope, we do root for her, because even though professionally she’s a disaster, she’s following a logical path of getting to know someone. But it’s not the actual path she’s supposed to be following. She can’t draw that distinction. It was important to me that no matter what it is we think about Josh’s diagnosed condition, he has figured out a way of functioning. It is limited, but in other ways, it has allowed him to be very sensitive, to be very attuned and be very available in his life.

Zach, can you talk about how you calibrated your performance? Josh is quirky and irregular.

Quinto: The tone of the film is something we talked about from very early on. I’m a producer of the movie as well. We had a lot of conversations about it before we went into production, so I had a very clear understanding of the kind of movie we wanted to make. Brian and I have been friends for so long [after meeting in college], that I understand his perspective and his point of view and sense of humor. I think I got an understanding of the tone and the level of the comedy and the levity that is a part of the story. It’s not a light, frivolous comedy. It’s dealing with human relationships and emotions that are significant and socially relevant. So we didn’t want to undermine the potential for discourse about those issues.

Shoaf: Zach takes each scene at face value, and Josh’s moods are not going to be traceable in a linear way from A to B to C. He’s going to go from feeling very good to feeling very bad. I think you see that most in the scene where he gets very angry at Emily. And thankfully, it doesn’t feel like it’s coming out of nowhere in the context of the film; Josh is having a really bad day. He went there, and it was probably hard to play a character whose moods are erratic and don’t follow a rational path.

Shoaf: It must have been immensely challenging to Google “mood swings” and find out what they are.

Brian, can you talk about the tone of the film? It’s absurdist, deadpan and melancholic.

Shoaf: The most ambitious thing in the film is the tone. You have an unreliable narrator with Josh, and you have humor that has to exist without a traditional joke, by and large. It’s humor that comes from the authenticity of the moment. It’s like threading a needle. It’s very risky.

Quinto: This is ultimately a film about three people who are lost to themselves, and the only way they can find their way is through each other. Hannah, [played by Sheila Vand,] exists as this kind of ephemeral catalyst to bring them together in a way, to wake Josh up and allow him to get to a place where he can connect.

One of my favorite moments in the movie is a simple one, the scene between Craig and Josh where Craig is wracked with guilt and has avoided this moment of confronting that he should have been there for his brother. He goes through this whole story about the zoo, and Josh’s response [stuns him]. The stories we tell ourselves and the things that we are willing to avoid because we believe those stories — even if they are not true — to me, is the essence of what this movie is. It’s about two people who missed out on the opportunity to really connect and be there for one another because one is afraid, and the other wasn’t able to face that fear.

I like that scene because it doesn’t go where you expect.

What I love about Josh is that he’s not resentful. Everything that he’s up against, his mental illness, his isolation and aloneness and abandonment — he’s not bitter and he’s not angry. He’s actually someone who wants to engage in the world, and with people, whether or not they are real.

Yes, I was a very imaginative kid. I spent a lot of time making up stories, running around in the woods playing make believe. Part of my path to become an actor is an extension of that. I do love to lose myself in the content of the stories that I tell. And I love being a producer and having a hand in what those stories are.