Rami Malek on his dual role in "Buster's Mal Heart": "Acting is a cure for my own personal deficits"

Emmy-winning star of "Mr. Robot" on his trippy new Tribeca indie playing two characters — who may be the same guy 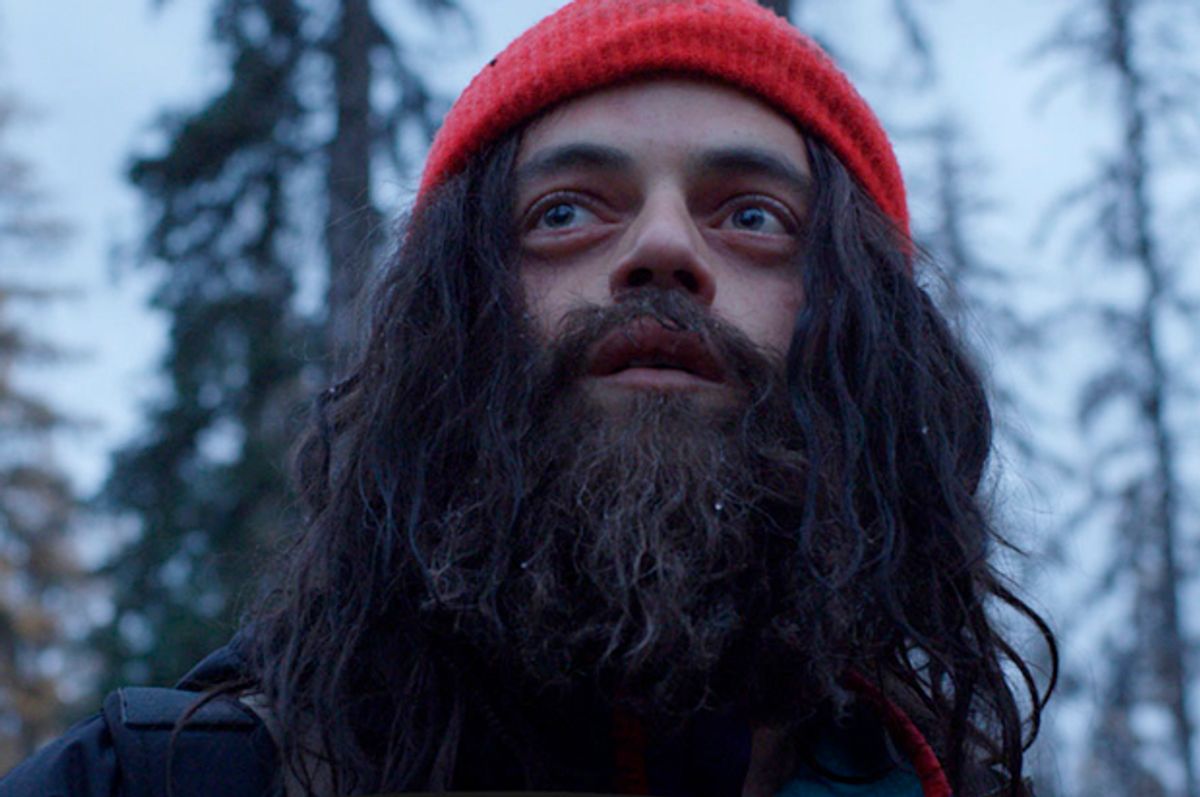 Propelled to internet-culture stardom as the protagonist of the geek dystopia series "Mr. Robot," Rami Malek now stars in a dual role in “Buster Mal’s Heart,” a trippy little indie written and directed by Sarah Adina Smith. In one storyline, Malek is Buster, a longhaired, bearded nomad who breaks into empty vacation homes and causes mischief, turning all the photos upside down or relieving himself in the cookware. In the other story, Malek plays Jonah, the night concierge at a hotel that sees few guests.

One night Jonah encounters an unnamed man (DJ Qualls) who talks to him about a mysterious phenomenon called “the Inversion,” and gets involved in various forms of criminal mischief.

“Buster Mal’s Heart” eventually joins these two narratives together, but the unifying element is Malek’s trickster performance, which ranges from being uptight and controlled to seething with rage as Jonah to being quietly sinister and somewhat sympathetic as Buster. Smith provides plenty of food for thought about freedom and flights of fantasy as the action that has prompted the character's split is revealed.

Malek, who won an Emmy for his role as Elliot Alderson in “Mr. Robot,” spoke with Salon about being a twin, playing two seemingly opposed characters in the same movie, and the pleasures of fire, water and wine.

I have four minutes on him, but we looked so much alike as babies they probably lost track of who was who. In the opening scene of "Buster Mal's Heart," that was him and me sitting face-to-face.

Did being a twin help you play these two roles as different people?

I don’t know that it informed my portrayal at all. It just shows you at a glance, that when you look at twins, at times strangers have trouble identifying them. Inevitably, though, the two share the same DNA and they have different outlooks and aspirations on life. It didn’t inform me any more than the story as a whole did.

I went with the idea of a man who wants two different things. One man is a soul searching for freedom, and the other is a man investing in love. There is the conflict we all have — that maybe we are all souls divided and we want both love and freedom. This story is about a man who loves so hard he splits into two literally. That’s the question the film asks: Man can want both freedom and love, and actually achieve those two very powerful forces, and achieve them in some equilibrium.

The first time I saw you was as a lovesick teen in the TV sitcom “The War at Home.” You have since moved into much darker territory, culminating with “Mr. Robot” and now this movie. Can you talk about the “heady” parts you seem to be doing nowadays? Do you fear being typecast?

I don’t fear being typecast. I’m playing the [Louis] Dega character in "Papillon," and then I'm playing [legendary Queen vocalist] Freddie Mercury. For me, I see these characters as men that are having a crisis that are very relatable to me and so many of us. This is the kind of material at my age that I’m more interested in exploring on a deeper level.

The deep crises these men are having in both stories, [in "Buster's Mal Heart" and "Mr. Robot,"] are issues that, if they dovetail in any way, it's because I’m interested in exploring that. The difference is that this existential crisis in "Mr. Robot" is more a socially conscious one. In "Buster," it’s more a universal conflict with God. So from my perspective, why not dig deeper into that kind of psychology?

The film contains some flights of fantasy. Do you ever imagine a different reality for yourself, or is that why you are an actor?

What it is for me is that I get to experiment with some philosophical questions that I have personally and expand upon them in worlds that are not naturally accessible to me as Rami living in New York at the moment. I am drawn to the things that we are all questioning — our own futility and power. How much do we have and how much control do we have on the way the world unfolds? I ask myself that question quite a bit. It’s very powerful and rewarding when you get to delve into it on a deeper level, creatively and intellectually.

You use body language and are very expressive without speaking. There are scenes of Buster and Jonah just staring that are very revealing. Can you talk about that aspect of your work?

There's something I’ve discovered about myself, that is sad: I do my absolutely best listening on camera. There’s a focus that just occurs when the moment is playing out and being captured in a motion picture or onstage. There’s no opportunity to miss a beat, and that brings a sense of confidence and power to characters who seem to not have any of that going on in their inner lives.

There’s an obligation and a duty I have to characters onstage and in film that I don’t attribute to myself — which is being as present as I am. I give them respect. Acting is a cure for my own personal deficits in life. I don’t find acting therapeutic. I’m just exploring someone else’s life. I’m not trying to have a psychological session. That would be way too self-indulgent.

Do you feel pressure to carry a film as a leading man after the success of your TV series?

I've always felt the burden of any performance, the lead or supporting [role]; you’re part of a greater and entirely more ambitious undertaking than just yourself. It's all pieces of a puzzle as far as I’m concerned. Every person in the crew and cast — they are all as important as the other. That’s how I look at it, so as to not feel the obvious weight of it.

Otherwise, it’s just impending doom that will follow you like a shadow and I don’t want to work or go through life that way. All you can do is give your best, day in and day out. I like to go home and go to bed feeling I gave everything I have. You have to feel good about that despite the inevitable outcome or critique or whatever follows any performance. The one thing I can always hold true to is saying, "I did the best I could." If I can’t say that, there’s a problem.

In the film, one character lives extremely rough — camping out, moving from place to place — while the other leads a more settled, ordinary existence. Which is more your style?

What I've come to terms with, and only begun to realize, is that I thrive in chaos. It's how my mind operates. [For me] to feel some normalcy, the world around me has to be erratic. And it’s the acceptance of that that gives me some sort of peace of mind. I love what I do, but I don’t need to do it every day. I have my hobbies.

I enjoy being out in nature, and I can just as easily have a vacation that takes me to a sandy beach or hole up in a cabin with a good book and a bottle of wine and a fire. Fire, water and wine, and I'm good to go. Don’t get me wrong. I am unusual, but not as unusual as my characters would make me out to be.