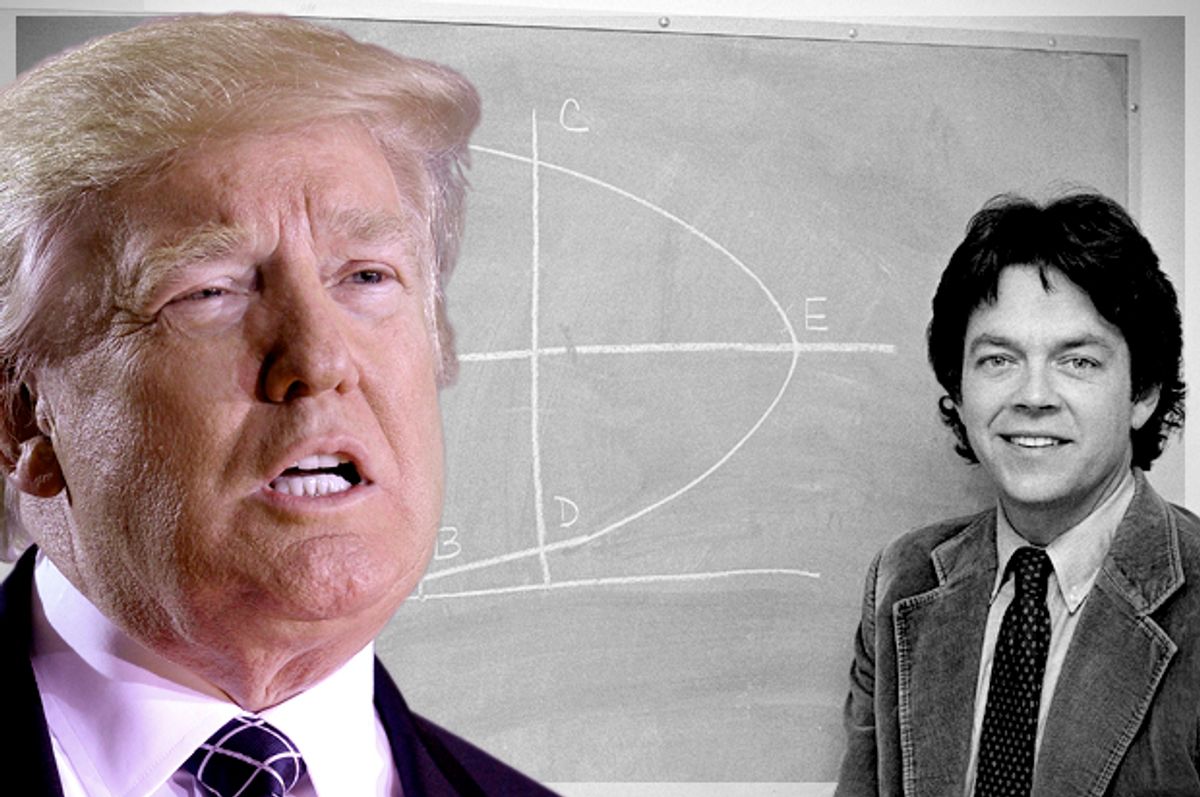 "The Laffer Curve, and Other Laughs in Current Economics." That was the title of the last of Martin Gardner's legendary "Mathematical Games" columns in Scientific American, published in December 1981. It’s worth recalling, now that President Donald Trump has dragged Arthur Laffer and his simplistic economic analysis back into the public spotlight again.

If you have mercifully forgotten about the Laffer curve (or never heard of it in the first place), it became the basis for all Republican tax policy, from the era of President Ronald Reagan forward. Laffer purported to prove the counterintuitive case that steep tax cuts would literally pay for themselves by stimulating such intense economic growth that tax revenue would actually increase over the long haul, despite lower rates of taxation.

Gardner wasn’t an economist, but he knew a great deal about math and playing games, and what Laffer was up to was child’s play to Gardner. The simplified curve Laffer drew looked like this: But Laffer's curve did not actually describe the relationship between taxes and revenue as it claimed to, since things in the real world tend to be more complicated, Gardner explained. His version, as published in that Scientific American column, looked like this: Gardner called the tangled mass of crisscrossing paths the “technosnarl,” and his point was a simple one: The real world is a messy place that can never be predicted with anything close to absolute accuracy. “More than one tax rate can maximize government revenue," he wrote. What would the future hold? "Economists cannot know," Gardner wrote. "The technosnarl is too snarly."

As a mathematical game master, who just loved messing around with things other people failed to fully appreciate, Gardner had an excellent point, as usual. But that wasn't the point economists took most seriously.

Economists are accustomed to simplistic models. Their problem was simply that Laffer gave no reason to believe that we were in the region of the curve where lowering taxes would raise government revenue. And they had plenty of reason to believe he was wrong. It was simply an act of faith on Laffer’s part, but he was presenting it as a dead certainty, with a huge guaranteed payoff. He was, in effect, hustling easy money, not acting like an economist at all.

Logically, Laffer’s argument had two main thrusts — first that cutting top rates of taxation would produce massive growth, and second, that the growth would be so strong that the tax cuts would pay for themselves.

Guess what? It didn’t work. According to Laffer’s theory, Reagan’s 1981 tax cuts should have paid for themselves, enabling Reagan to keep his pledge to balance the budget within four years. Instead, the budget deficit exploded. Previous to that, the size of the debt as a fraction of the economy had been falling continually since World War II, with a modest exception during the Nixon-Ford years.

In short, Reagan’s Laffer-inspired tax cuts (repeated under Bush) were exactly the wrong thing to do — if you actually cared about controlling government debt, something conservatives have always claimed to. Nowadays, even top conservative economists no longer claim that tax cuts will inevitably pay for themselves. It's not even close.

Writing about the Laffer revival for The New York Times, Peter Baker quoted N. Gregory Mankiw, an influential Harvard economist who chaired the Council of Economic Advisers under George W. Bush. “A reasonable rule of thumb, in my judgment, is that about one-third of the cost of tax cuts is recouped via faster economic growth,” Mankiw said.

Just to be clear, that's what a leading adviser to a conservative Republican president said: Laffer was partly right, in that tax cuts can stimulate economic growth, and partly wrong because that growth isn't nearly enough to cover the revenue lost by cutting taxes.

But is Mankiw still overselling the case? Was Laffer, as Mankiw has claimed, at least half right?

Not even. In 2011, Thomas Piketty and two colleagues examined the record of 18 Western countries from 1975 to 2008, looking at the relationship between changes in the top tax rate and average growth. The team found that the correlation between them was "virtually zero and insignificant." Without their finding a correlation, there was no point in seeking causation. So it seems highly plausible that Gardiner’s technosnarl has had the last laugh after all.

It may sound sensible to claim that cutting taxes stimulates the economy; it certainly gives some wealthy folks like Donald Trump more money to spend. But it also comes with significant costs, which may be less noticeable at first. That’s the beauty of looking at long-term, large-scale data, as Piketty and his co-authors did: You don’t have to tease out all the less obvious factors involved; you simply look at how everything adds up in the end.

Wouldn't it be nice to have a solid, real-world example we can point to? Wouldn't you know it, we do: It's called Kansas. In 2015, when every Republican under the sun was running for president, there were two conspicuous absences of names previously rumored as contemplating a candidacy. One of them was then-Indiana Gov. Mike Pence, derailed in particular by the unexpected backlash to the anti-gay bill he signed (an extremist Christian-right, state version of the federal Religious Freedom Restoration Act). The other was Kansas Gov. Sam Brownback, who had withdrawn from competition in 2014, while fighting for his political life in his re-election campaign.

Brownback had dreamed of becoming the new Ronald Reagan: Using Laffer as his tax guru, hoping to spark a Kansas miracle that would propel him to the top of the GOP field. Instead he ended up practically bankrupting the Sunflower State, driving so many Republicans to support his Democratic challenger in 2014 that he had no choice but to pull the plug on his presidential ambitions.

An August 2012 story in the Wichita Eagle laid out Brownback's vision:

Laffer had teamed up with Stephen Moore, the founding president of the Club for Growth, and authored a paper that was quoted in that same article: “Taxing rich people and giving the money to poor people," they argued, "will increase the number of poor people and reduce the number of rich people.” The Eagle's story continued as follows:

Laffer said that the argument is simple: people and businesses seek out lower tax rates, and higher rates discourage people from employment.

“If you tax people who work and you pay people who don’t work, do I need to say the next sentence to you?” he asked.

In short, it was the same old supply-side argument that Ronald Reagan rode in on in 1980, once memorably described by his primary opponent and future vice president, George H.W. Bush, as "voodoo economics."

Brownback promised later in 2012, when his tax cuts were passed by the state legislature, “Our new pro-growth tax policy will be like a shot of adrenaline into the heart of the Kansas economy.” What could go wrong?

Answer: just about everything. I wrote this for Salon nearly two years ago:

As Brownback’s tax-cutting fantasies predictably failed last year, there was a wave of hope that the state might change direction by voting Brownback out. In March, a report from the Center on Budget and Policy Priorities warned that “Kansas is a cautionary tale, not a model,” explaining that “As other states recover from the recent recession and turn toward the future, Kansas’ huge tax cuts have left that state’s schools and other public services stuck in the recession, and declining further — a serious threat to the state’s long-term economic vitality. Meanwhile, promises of immediate economic improvement have utterly failed to materialize.”

The damage was inescapable — in March, the State Supreme Court ruled, in Gannon vs. State of Kansas, that under Brownback (in part resulting from his tax cuts) state school funding cuts had violated the state constitution. . . .

In the end, Brownback’s blame-shifting game fooled just enough people to succeed: in November [2014], he survived with just under 50 percent of the vote. That’s a far cry from what he once imagined — riding a Kansas miracle all the way to the White House. Nonetheless, ever since his re-election the crazy has only spread to more and more aspects of governance.

The national media has largely ignored how badly things have gone in Kansas. But in August, the Center on Budget and Policy Priorities produced a cautionary warning about how the state’s record reflected on Trump’s economic team, including Laffer, Moore and Lawrence Kudlow. “The tax cut failed to boost the Kansas economy,” they warned, noting the following:

As for the state’s financial stability, income tax revenues for fiscal year 2016 were almost $700 million lower than those received in 2013, when the tax cut first took effect, even though the national economy had grown significantly stronger. This past March, the Kansas Supreme Court once again found that funding shortfalls resulting from Brownback's tax cuts had violated the state constitution, to the tune of more than $400 million.

Kansas is the self-proclaimed laboratory and poster child for Laffer curve tax cuts. Instead of launching Sam Brownback to the White House, that state's economy is widely seen as an unmitigated disaster. This doesn’t seem to bother Trump in the slightest. Indeed, why should it, given his well-known imperviousness to factual evidence?

The rest of us, however, can’t afford to let Laffer have the last laugh.