Embattled by reality, Donald Trump will feel the love at the NRA convention: Nothing good can come of this 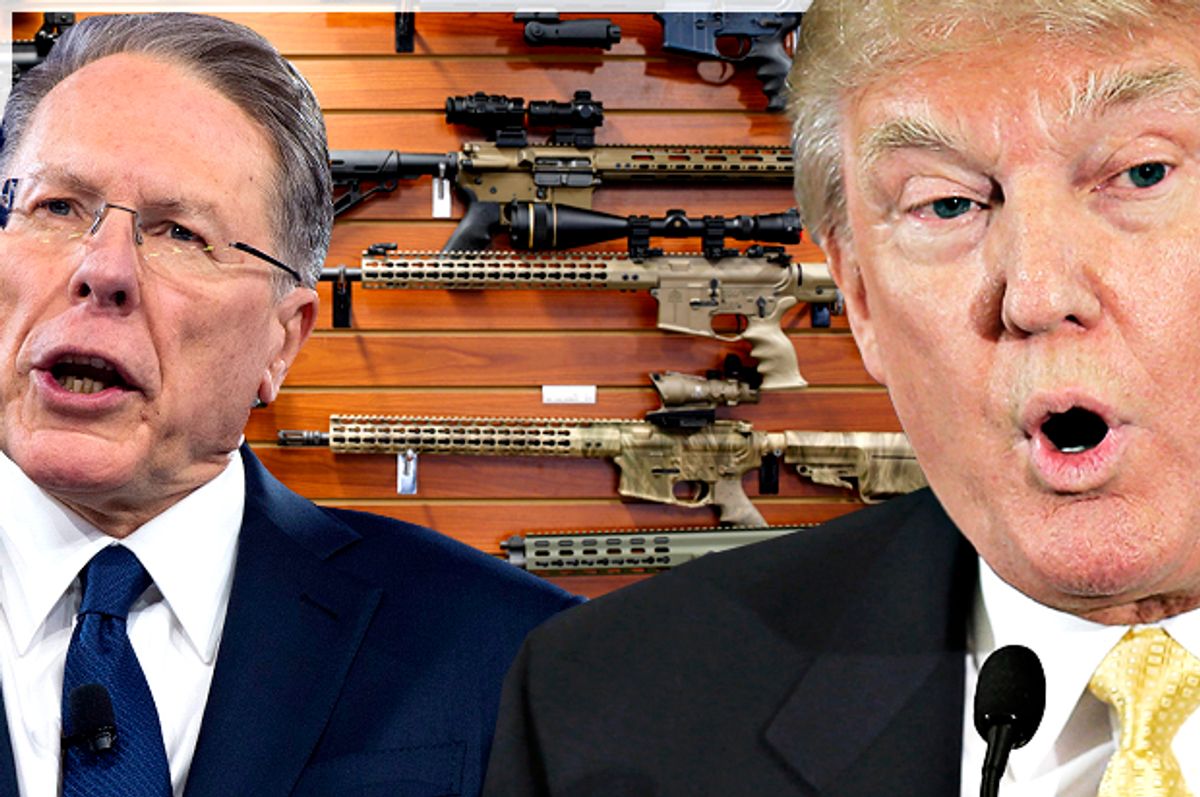 Donald Trump had many ardent admirers during the 2016 campaign, but one group that jumped on the Trump bandwagon early and enthusiastically was the National Rifle Association. Its passionate endorsement of him may be one of the most unexamined reasons for his success. Back in December  I wrote a piece about the savvy move of the NRA president, Wayne LaPierre, to turn gun rights into a "populist" agenda for the organization. LaPierre was selling Trumpism before Trump even came on the scene.

For at least the past decade, LaPierre's pitch has been that the NRA stands for more than just gun rights. Rather it stands for a way of life that "elites" are trying to destroy by suppressing free speech, religious liberty and people's freedom to run their own business or choose their own health care. LaPierre declared that "drug-dealing illegal immigrants" were pouring over the border and lenient liberal judges were letting criminals prey on innocent people destroying our cities. Trump's "American carnage" inaugural address no doubt resonated strongly with many NRA true believers.

Al Gore's narrow defeat in the 2000 presidential election convinced Democratic Party strategists to take gun control off the table to stop the erosion of support from rural white voters in the Rust Belt and the South. Gore's inability to win in his home state of Tennessee — an unusual event, at least at the time — was chalked up to his support for gun control. According to a New Republic article by Noam Scheiber, by 2002 it was gospel:

Sure, Gore had won the Rust Belt battleground states, but the Democrats had lost their third straight bid to retake Congress — and many in the party believed gun control was to blame. In particular, they pointed to the election’s regional skew. In famously anti-gun California, the Dems knocked off three incumbents. But throughout the rest of the country, they defeated only one. “Of all the issues,” insists one senior Democratic congressman, gun control “had the greatest net [negative] effect.”

By 2008 the GOP had so discredited itself with the Iraq War and the financial crisis that Democrats were able to win back seats and the presidency in many of those disputed areas. And then a series of horrific mass shootings persuaded many Democrats, led by President Barack Obama, that they couldn't be silent about gun proliferation any longer. The unhappy result was a reinvigorated gun rights movement and a whopping surge in gun sales.

As we all know, Donald Trump narrowly won the Electoral College tally in three of those crucial Rust Belt states in 2016, putting him in the White House. This time the conventional wisdom has been that it was because of his economic populist message rather than gun rights. But as I argued in my earlier article, Trump's wholehearted embrace of the NRA may very well have been a bigger contributing factor. Certainly LaPierre believes it was. His victory speech after the election was nothing short of triumphant.

LaPierre released a videotape to his members, titled "Our Time Is Now," echoing the name of a famous 1981 speech by President Ronald Reagan. He took credit for sending Hillary Clinton “on permanent political vacation” by making “her hatred for the Second Amendment a central issue of this campaign." He issued a call for vigilance because Americans "face a growing group of anti-Second Amendment elitist billionaires, led by George Soros and Michael Bloomberg, and they will continue to enjoy the support of an openly dishonest media that truly hates your right to speak, your right to worship and your right to vote.”

A couple of months later LaPierre spoke to the Conservative Political Action Conference convention and in a long, passionate stem-winder he explained to the excited crowd that the central threat facing America today is "the violent left." He put participants in the anti-Trump protest movement on notice that they had better watch themselves or some God-fearing real Americans might take matters into their own hands:

The left's message is absolutely clear. They want revenge. You have to be punished. They say you are what is wrong with America. And now, you have to be purged. . . . Make no mistake: If the violent left brings their terror to our communities, our neighborhoods or into our home they will be met with the resolve and the strength and the full force of American freedom in the hands of the American people and we will win because we are the majority in this country. . . . We are still here and we’ve got President Trump’s back — for the next eight years.

That would sound like typical right-wing hyperbole if it weren't coming from the man whose followers are all armed to the teeth. Ironically, times are tough for the gun industry when a Republican holds the the White House; gun sales typically fall and the growth curve of NRA membership is likely to flatten out. So the likely strategy is to gin up fear among the faithful so that people will buy more guns and renew their memberships.

To that end, it appears the NRA has gone full "alt-right." Media Matters issued a report on Bill Whittle, a new commentator for the NRA's news outlet NRATV, who "has promoted the racist notion that black people are inherently intellectually inferior to people of other races and suggested that races could be divided along the lines of 'civilized man' and 'barbarian.'" The organization is consolidating the entire Trump worldview under the NRA imprimatur.

On Friday Donald Trump will become the first president since Ronald Reagan to speak at the National Rifle Association's annual convention.

We can expect him to receive a rapturous welcome. These gun-proliferation zealots are the core of his base and may be the real reason he won the election, and they know it.

The president, who has just discovered, much to his surprise, that his new job is harder than being a reality-TV star and heir to a real estate fortune, will no doubt feel relieved to be back in the bosom of his most ardent admirers. Unfortunately, he is also highly susceptible to suggestion, so let's hope LaPierre cools it with the declarations of war on the "violent left." Trump's so desperate for action at this point that he might get carried away and take him seriously.