White nationalists and their agenda infiltrate the mainstream 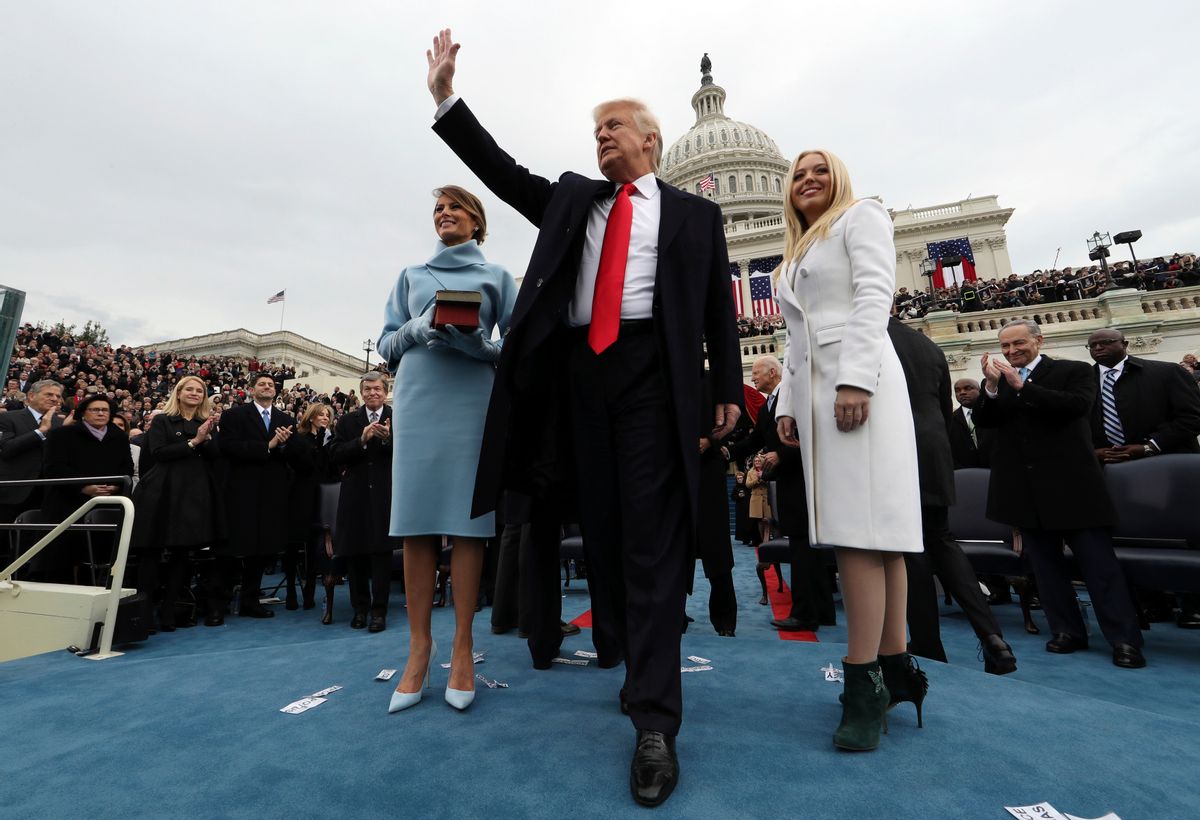 President Donald Trump waves after taking the oath of office as his wife Melania holds the Bible, and Tiffany Trump looks out to the crowd, Friday, Jan. 27, 2017 on Capitol Hill in Washington. (Jim Bourg/Pool Photo via AP) (AP)
--

As he spoke to the nation on Jan. 20, Donald Trump reminded white nationalists why they had invested so much hope in him as their champion and redeemer.

He painted a bleak picture of America: a nation of crumbling, third-world infrastructure, “rusted-out factories,” leaky borders, inner cities wallowing in poverty, a depleted military and a feckless political class that prospered as the country fell into ruin.

He promised an “America First” policy that would turn it all around. “This American carnage stops right here and stops right now,” Trump declared.

The inaugural address echoed the themes of a campaign that had electrified the white nationalist — or “alt-right” — movement with its promise to stop all Muslim travelers at the border and deport millions of undocumented immigrants – killers and “rapists,” Trump called them.

In his first 100 days, despite his failure to achieve any major legislative victories, Trump has not disappointed his alt-right followers. His actions suggest that — unlike the economic populism of his campaign — Trump’s appeals to the radical right did indeed presage his White House agenda.

On Jan. 31, former Klan leader David Duke tweeted: “everything I’ve been talking about for decades is coming true and the ideas I’ve fought for have won.”

Along with an array of conservative billionaires, Trump installed a handful of advisers who are closer to the radical right than to the mainstream. They include:

Bannon, in particular, embodied the hopes and dreams of white nationalists with his blow-it-all-up style and apocalyptic worldview. He thrilled them with his hyper-nationalism, his firebrand attacks on “globalists” and Republican “cucks,” and his stated desire to “deconstruct” the “administrative state.”

Trump brought into the White House two writers from Bannon’s Breitbart: Gorka, as a deputy assistant, and Julia Hahn, as special assistant to the president.

As chief of staff for U.S. Customs and Border Protection, Trump appointed Julie Kirchner, who spent nearly a decade as executive director of the Federation for American Immigration Reform (FAIR). The group, which is included on the SPLC’s list of hate groups, has deep ties to white nationalists and eugenicists. Immigration and Customs Enforcement (ICE) hired Jon Feere, a legal analyst at the Center for Immigration Studies. The group is an offshoot of FAIR and also listed as a hate group by the SPLC.

Perhaps Trump’s most consequential appointment was Jeff Sessions as attorney general. Sessions, who was once denied a federal judgeship amid allegations of racism, was the most powerful ally of anti-immigrant and anti-Muslim extremist groups while serving as a U.S. senator from Alabama.

Trump moved quickly to make good on his most inflammatory promises, particularly those related to immigration, his core issue. Here are the major policy actions of his agenda over the first 100 days:

Trump’s appeal to white nationalists can hardly be separated from his willingness to traffic in the most outrageous conspiracy theories and fabrications of the radical right. He forged his political identity, in fact, by leading the birther movement that questioned the heritage of the nation’s first African-American president.

Trump has long been a fan of Alex Jones, a professional conspiracy theorist who once claimed that Hillary Clinton “has personally murdered and chopped up and raped children.” In 2015, he appeared on Jones’ radio show InfoWars and declared Jones’ reputation “amazing.” Trump also for many years has maintained a close association with the far-right provocateur Roger Stone.

As president, Trump has continued the same pattern.

He has routinely attacked the mainstream media, calling it “the enemy of the people.” He has repeatedly cried “fake news” when media reports cast him in a negative light.

He has spun wild, unsubstantiated conspiracy theories — claiming that the news media routinely covers up terrorist attacks; that 3 to 5 million people cast illegal ballots for Hillary Clinton, costing him the popular vote; and that Obama conspired with British intelligence officers to tap his phones during the campaign.

He has also cavorted with extremists. The Muslim-bashing Brigitte Gabriel reportedly visited the White House and later was dining with Trump at Mar-a-Lago as U.S. warplanes bombed a Syrian air base. The overtly racist rocker Ted Nugent – who once called Obama a “subhuman mongrel” and suggested he might kill him — visited the White House with Sarah Palin.

Despite the alt-right’s windfall, as the end of the first 100 days approached, many white nationalists were growing restive. They feared Trump was straying from his “America First” doctrine after becoming increasingly engaged internationally – bombing Syria, flip-flopping on his rhetoric about China’s currency manipulation and praising NATO, for example.

Taking the long view, though, was FAIR President Dan Stein, whose nativist friends were now, as The New York Times put it, “in positions to carry out their agenda on a national scale.”

“We’ve worked closely with lots of people, who are now very well placed in his administration, for a long time,” Stein said.