Dispatch from the United States of Science: A nation of nerds fights back 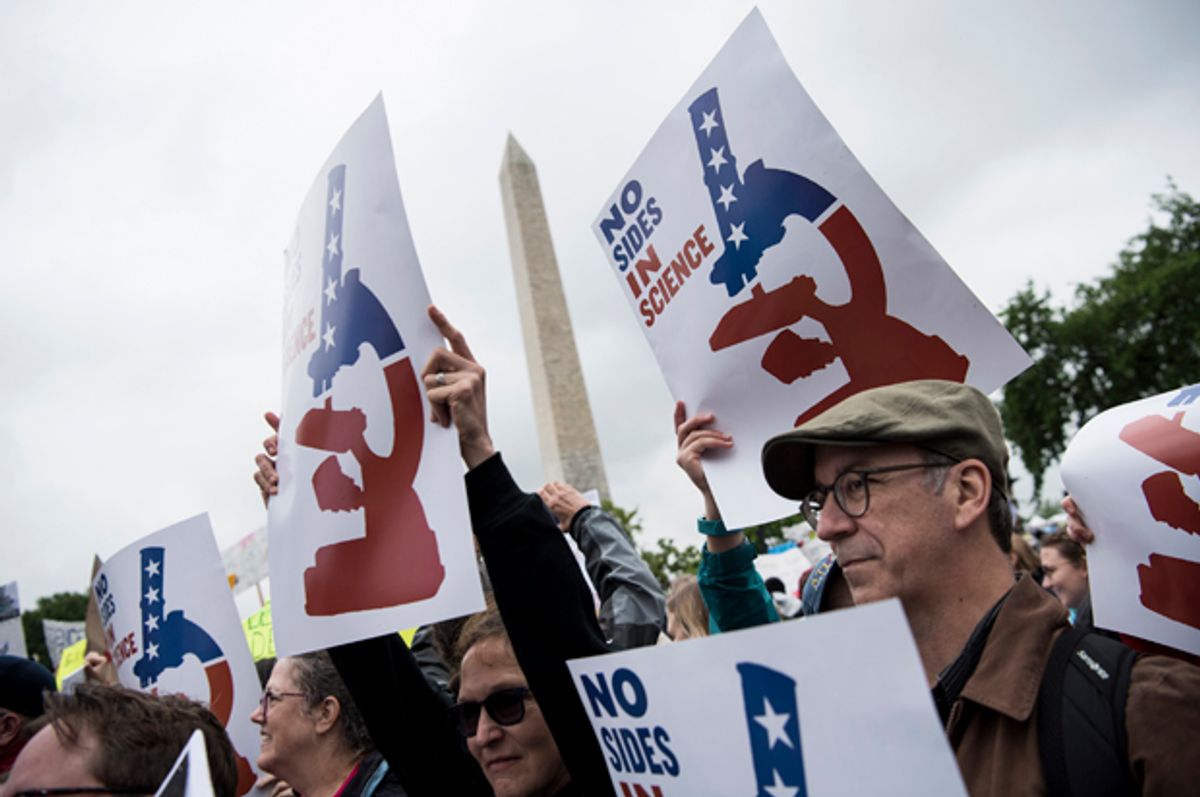 This Earth Day, April 22, saw a March for Science. The main event was in Washington, D.C., but more than 600 cities across the nation and around the world participated. What began as a grassroots effort ultimately drew in more than 200 professional organizations, including the American Association for the Advancement of Science (AAAS). As AAAS CEO and former congressman Rush Holt stated, the nonpartisan march was “a unique opportunity to communicate the importance, value and beauty of science.”

I was one of the tens of thousands in D.C. last Saturday. I had been asked by the American Physical Society and the Optical Society to give a talk on Superhero Physics as part of the Teach-In events. Following my presentation, I joined the throngs on the Mall, listening to short speeches from scientists like Michael Mann, who developed the “hockey stick” graph of rising global temperatures, and Dr. Mona Hanna-Attisha, who uncovered the high lead contamination in the Flint, Michigan, drinking water.

The crowd, although not as large as the one that would be found at San Diego’s Comic Con, had the same feel, as people came together to be with their tribe. While there was less cosplay in D.C. than San Diego, there were more signs — many pointing out the benefits of scientific research (“Got Polio? No? Thank Science!”). And just like Comic Con, some signs required deep knowledge of “Star Trek: The Next Generation” to interpret (my favorite: “There are Four Lights!” — you’ll have to google it).

The march itself began right on schedule, at 2 p.m. As we shuffled through a driving rain, everyone’s spirits were high. I was buoyed by the camaraderie of my fellow nerds. The March for Science was an opportunity for folks to demonstrate their support for the scientific enterprise and the pursuit of objective truth. Not everyone at the march was a scientist or engineer, but practically everyone was a citizen and voter. Part of our responsibility as citizens is to have informed opinions on scientific and technological issues, from climate change to alternative energy to medical research. Our decisions must be technically sound, not just sound technical.

In the United States of Science, we believe in facts — period.

In the United States of Science, it doesn’t matter if you wear a yarmulke, a hijab or a baseball cap. We don’t care what’s on your head — we care about what is in it.

In the United States of Science, it does not matter whether you are male or female, black or white. What matters is — can you do the math?

In the United States of Science, we recognize that science is universal. Principles that improve our lives can’t be dismissed when politically inconvenient.

It’s not just the particle accelerators and magnetic resonance imaging that science delivers; it’s the mundane comforts, too. Every binge-watching session during a snowstorm is brought to you by science. Consider the handy television remote control, which employs infrared light-emitting diodes and photodetectors to keep us on the couch. These devices exist because of our understanding of quantum mechanics, the field of physics that describes the properties of atoms and their interactions with light. Quantum mechanics also accounts for why double or triple panes of glass in our windows keep our homes warm. Atmospheric carbon dioxide (having comparable quantum mechanical properties to silicon dioxide — the major component of window glass) will lead to a similar trapping of heat. The physics that makes TV remote controls possible does not magically stop functioning when applied to infrared-absorbing molecules in the atmosphere.

The motto of the AAAS is “to advance science for the benefit of all people.” America has led the world in innovation and discovery thanks to its strong commitment to and support of science. Those who question its results and value should at least be consistent and stay off Twitter.

James Kakalios is the Taylor Distinguished Professor of Physics at the University of Minnesota and the author of the bestselling "The Physics of Superheroes." His book, "The Physics of Everyday Things," is on sale from Crown on May 16, 2017.