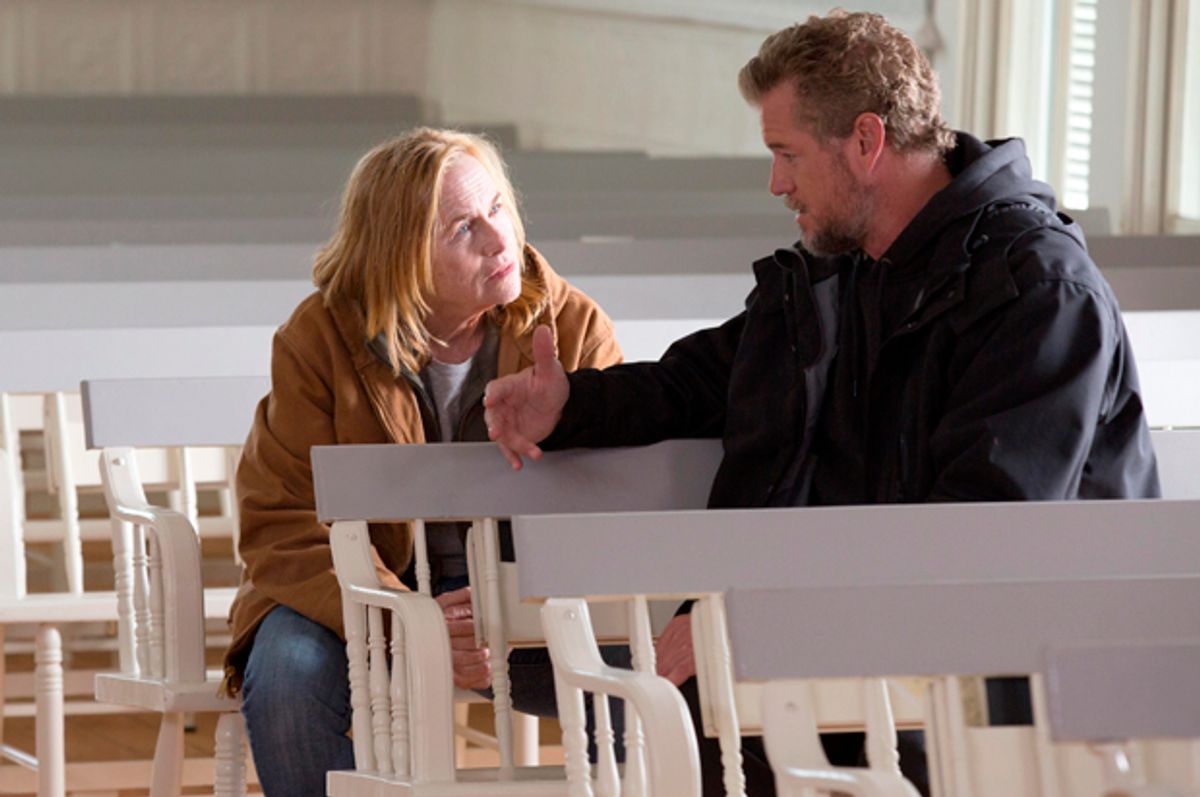 The modest detective drama “Grey Lady” feels as if it might have been adapted from a mass-market paperback. But this routine thriller about Doyle (Eric Dane), a suspended Boston cop conducting his own investigation into the murder of his sister and his partner, is an original story by producer Armyan Bernstein and writer-director John Shea.

This low-budget drama adheres to many of the conventions of the detective genre, without really distinguishing itself in any of them. That may be seen as a complaint — that the film should have been edgier, or less predictable — but there is something reassuring about Shea’s instinct-free, by-the-numbers approach. “Grey Lady” may be an undemanding film, but it is consistently absorbing; a perfect Friday night flick that one can easily get sucked into watching.

The pre-title sequence has Doyle and his partner Maggie (Rebecca Gayheart, Dane’s real-life wife) responding to a 911 call. A woman in peril is claiming that a man is stalking her and calling her Deirdre — the name of Doyle’s recently murdered sister. Arriving on the scene, Doyle realizes that he and Maggie have been set up. Maggie, who has just learned she is pregnant, is killed, and Doyle is injured.

Given the circumstances surrounding Maggie’s death, Doyle’s superiors suspend him. In retaliation, Doyle heads to Nantucket, the “Grey Lady” of the title, where he hopes to locate his aunt Lola and his cousin Beth, who may be able to help him solve the mystery of who killed his sister. On the ferry, he meets an eccentric woman known as the Duchess (Laila Robbins), a gallery owner who invites him to an art opening, and spies Eli (Carolyn Stotesbury) and Perry (Chris Meyer). Once on the island, he meets Johnson (Adrian Lester), the local cop who will assist him in his unofficial investigation.

As Doyle gets the lay of the island, he attends an outdoor party and encounters the Duchess and Eli again. Trouble arises, predictably enough, when Doyle and Johnson receive a call that the Duchess has been found dead. Her body is carved with a marking that resembles those on both Doyle’s sister and his partner Maggie. Apparently, the serial killer — well, killers actually, Eli and Perry are revealed to be the perpetrators — have followed Doyle to the island.

This disclosure isn't much of a spoiler, I swear. It's more like the filmmakers' effort to build suspense as the pair, who are brother and sister, try to exact “five-fold misery” on Doyle. The reasoning behind their crime spree relates back to a childhood episode involving their father and Doyle’s dad. The event is explained via some clunky flashbacks that contain a moment of visual panache when a drop of blood falls from above onto Doyle’s forehead.

If the motivation for the siblings’ crime is conventional, the way the criminals draw out their plan to harm Doyle — by attacking those closest to him, rather than Doyle himself — is downright peculiar. Having dispatched Doyle’s sister, partner and friend, Eli and Perry next set their sights on Melissa (Natalie Zea), an artist Doyle has befriended on the island. Doyle has purchased a painting by Melissa at the Duchess' art opening because the image reminds him of Maggie.

“Grey Lady” never quite probes the depths of memory, loss and grief so much as it hints at them, using these weighty themes to connect the heroes and villains. Eli may be cut from the femme fatale mode, but while she's crafty, she is mainly a puppet for Perry, who is hateful simply because he harms innocent people. Perry uses syringes and scalpels on his victims, even cutting off the fingers of one character to get him to divulge information. But Shea clearly does not want to rub the audience’s noses in gratuitous violence. The gore is mostly bloodless, and the film’s shootouts are perfunctory, not pulse-quickening. As a filmmaker, Shea just wants to convey what viewers are supposed to think and feel.

Even the actors are responsible for being expressive. Doyle is so taciturn and stoic that Eric Dane may seem pretty wooden in the lead role, but to the actor’s credit, he projects something underneath Doyle’s cold surface. It is not pain exactly, but more like knowledge: He is observing everything, hell-bent on solving this puzzle and not letting his emotions distract him from his mission.

The film’s other notable performance belongs to Amy Madigan, who plays Angela, a woman who claims she once knew Doyle’s aunt, Lola. Madigan’s part in the drama is completely unsurprising, and it involves the expected and lengthy confession that is essential to detective dramas, but the actress delivers her big speech with conviction, making the most of her brief screen time.

As the killers, neither Carolyn Stotesbury nor Chris Meyer are particularly developed as characters, but they exude sinister qualities and their bad behavior is compelling to watch. In support, Natalie Zea gives a serviceable performance as Melissa, although Adrian Lester is mostly wasted in a thankless role as Johnson.

“Grey Lady” is not meant to be an actors’ showcase. Shea puts the emphasis on atmosphere over real sensation. The gray, rainy, foggy weather and mostly empty streets might seem like obvious cues for the characters’ moods, but they communicate the charms of Nantucket in the off season. One of Shea’s stylistic efforts is to infuse the film with an Irish lilt, using traditional ballads during some of the film’s montage sequences. One song in particular is played over a scene featuring Clara (Eilin O’Dea), a blind friend of Melissa’s who gets embroiled in the mystery following an encounter with Perry.

The way Clara’s storyline plays out involves Eli and Doyle each manipulating Melissa, who suffers from panic attacks, for their own purposes. The sequence generates real tension because viewers understand each character’s motivation. As Melissa inadvertently confounds their plans, the film delivers some of its few surprises.

Clara’s episode also contributes to the themes of loss, grief and memory. But by and large, “Grey Lady” is highly watchable but never deep.