If late-night comedy goes on strike: What happens if Jimmy Fallon has to write his own jokes?

TV writers could strike on Tuesday. Which of the network late-night comedy hosts can fly without a net? 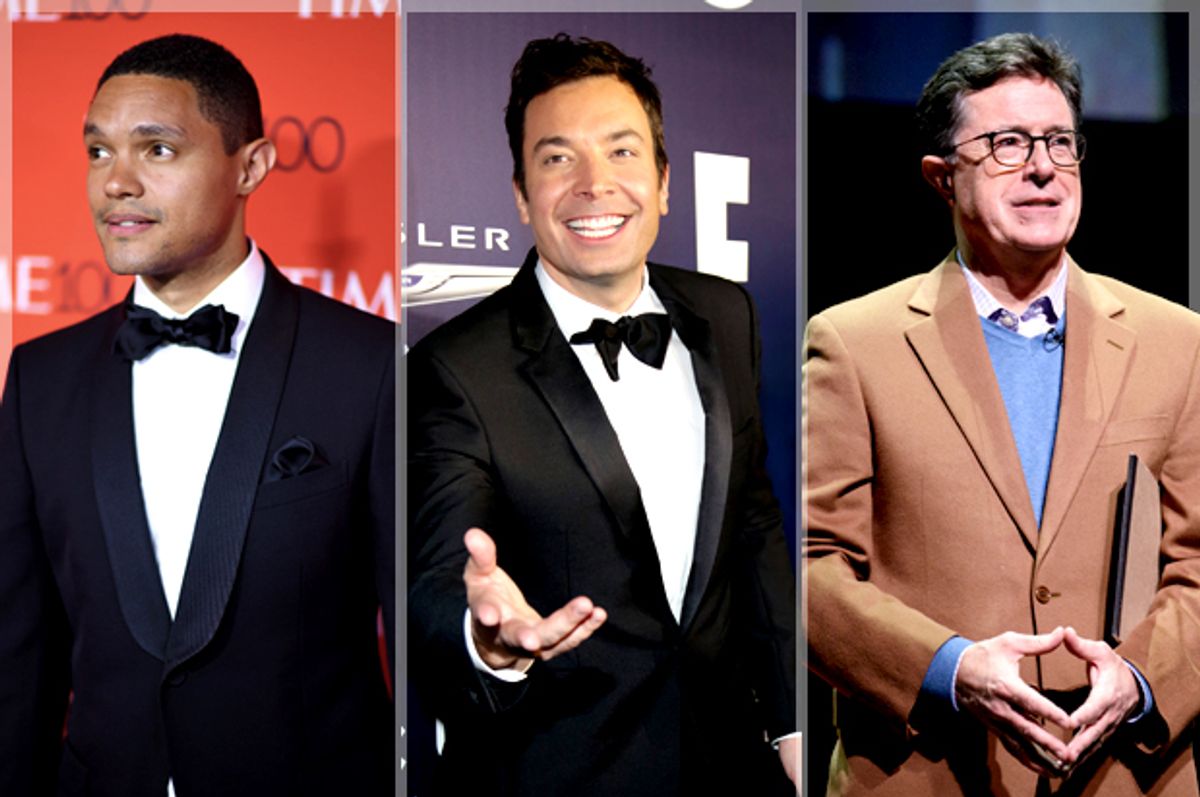 If a writers' strike grinds film and television productions to a halt next Tuesday, the typical prime-time television viewer probably won’t notice much of a difference. At first. Most broadcast and cable series that are currently airing have already filmed their finales and wrapped production. Many high-profile favorites set to debut or return this summer, including HBO’s “Game of Thrones,” Netflix’s “Orange Is the New Black” and Showtime’s resurrection of “Twin Peaks,” are in the can and ready to air.

Weekly comedy talk shows, too, will be yanked. Bill Maher will be shushed. John Oliver and Samantha Bee fans, be sure to get your fix this weekend. Bee’s hosting the “Not the White House Correspondents' Dinner,” airing Saturday at 10 p.m. on TBS, and on Sunday HBO will air the 100th episode of “Last Week Tonight” at 11 p.m.

The Writers Guild of America (WGA) is asking for raises in guild minimums and script fees to offset the increasing number of shorter episode orders; a payment structure comparable to broadcast for writers working on cable series and projects for streaming outlets such as Netflix, Amazon and Hulu; and an increase in studio contributions to the guild’s health fund.

And unless the WGA and the Alliance of Motion Picture and Television Producers (AMPTP) can reach an agreement and sign a new master contract by Monday’s end, all WGA writers will be on strike as of Tuesday, May 2. That means it’s pens down for late-night scribes who churn out the jokes.

Night owls will be served repeats, which is sustainable in the short term. But the current administration is unpredictable and pumps out ludicrous breaking news items each day, proving a ratings boon for late-night series. With that as a given, networks may not put up with a total blackout for as long as they did in 2007, which was the last time the WGA went on strike.

The 2007 walkout dragged on for 100 days, from Nov. 5 until Feb. 12, 2008. But NBC, CBS, ABC and Comedy Central forced their hosts to return to the air a month before the strike ended, starting on Jan. 2, to protect the jobs of their non-WGA-affiliated staff members.

Only “Late Show with David Letterman” and “The Late Late Show with Craig Ferguson” were able to resume broadcasting with their full writing staffs on Jan. 2, 2008, because both shows were fully owned by Letterman’s production company, Worldwide Pants, which successfully negotiated a new agreement with the WGA apart from the AMPTP.

But all of the aforementioned series are owned by the companies that run their respective networks. Additionally, the pressure of producing viral clips, a late-night staple, was virtually nonexistent in 2007. Today it’s an essential aspect of both network marketing and series promotion, not to mention a key weapon in the ratings wars and one of the likely reasons Colbert’s show has pulled ahead of "The Tonight Show" in the Nielsens.

Neither the writers nor the studios want a protracted strike -- and, fingers crossed, that might not even come to pass. But if the WGA is forced to once again dig in for the long haul to get the studios to meet their completely reasonable demands, it’s doubtful that the networks will allow late-night hosts to twiddle their thumbs or grow strike solidarity beards for two months.

To be clear, all of these hosts work closely with their writers, don’t want to anger them and know what kind of bad publicity comes from appearing to undercut a union action. If any late-night host brings his or her show back on the air, said host will be doing so at the insistence of network overlords holding the livelihoods of their remaining staffs at ransom.

And to the viewer, their writer-free returns may result in extraordinary off-the-cuff television — or they might crash and burn, night after night. In a perverse sense, the latter may actually serve the WGA's cause.

As for how well each host will fare without their scribes . . .that depends.

There's a chance that Samantha Bee and John Oliver may keep their weekly series dark for longer than their evening talk show cohorts, given that their audiences are used to each show taking breaks midstream. Both "Full Frontal" and "Last Week Tonight" are built around extensively researched feature segments, and those are virtually impossible to pull off without a writing team. Barring a format change, TBS and HBO could opt to shift their schedules into hiatus or take a cue from “The Daily Show” and compile “best of” clip episodes.

What will be interesting to see is how long Bill Maher is willing to stay benched, since he can simply fill his HBO show with longer panelist segments and freestyle provocation. But assuming the same rules that held in 2007 apply today, if any of these folks are pressed to go back on the air, they’ll be required to ad lib their monologues and any bits that would normally be scripted to refrain from running afoul of WGA rules. This is where a host’s true talent as a performer is put to the test.

Several of the hosts have improv backgrounds. Colbert began his career with Second City Chicago, while Meyers made his bones with ImprovOlympic and Boom Chicago. Bee is a founding member of The Atomic Fireballs, a Toronto-based troupe.

But Conan O’Brien, primarily a writer before he became a late-night star, has been in this position before and proved his mastery of the inane. In his first episode back from the 2007 strike he created a bit out of having the camera linger on his strike beard at different angles as the band played a weird ballad. O’Brien is at his best when the wheels fly off and stupendously awkward in man-on-the-street interactions. Count on him to find a lot of creative ways to fill oodles of time with utter nonsense.

Jimmy Kimmel also has farmed some of his best bits from working the crowds milling around the El Capitan Theater in Hollywood, where his show films. His successful Mean Tweets segments could serve him well, although his ability to rely on it may depend on the show’s access to talent. In 2007 a number of stars honored the strike, declining to appear on late-night programs in solidarity with WGA writers. However, Kimmel’s deadpan avuncularity doesn’t translate well when he’s under pressure and has to fly by the seat of his pants. (Remember how flustered he became at the end of this year’s Oscars?)

In contrast, Stephen Colbert, who hosted episodes of “The Colbert Report” during the 2007 strike, recently demonstrated his aptitude for mining gold from unanticipated moments when he extemporized a monologue following the results of November's presidential election. “The Late Show” has pulled ahead of “The Tonight Show” in no small part because Colbert has reprised elements of his largely retired Comedy Central alter ego to surgically slice apart Donald Trump’s lunacy.

And by establishing himself as the go-to guy for finding the right punchlines in response to the president’s tweets and news bites, Colbert may be in the best position to ride out the storm. After all, the president has been doing most of the work for him and almost every other late-night host over the last 100 days.

The same is true for Seth Meyers, but his task will be to loosen the show’s heavily structured segments such as “A Closer Look.” He’s an agile conversationalist who can parry and jab his way through challenging exchanges, so it may be to his benefit to lean heavily on his skills as an interviewer.

But what about Trevor Noah? “The Daily Show” host was a stand-up comedian before coming to the Comedy Central series and struggled to strike the right tone for more than a year after he became its host. (During the 2007 strike, Jon Stewart renamed the program "A Daily Show" to acknowledge the writing team's absence.) Noah has since found his voice, but just as much of the show’s upward trend can be credited to the rising popularity of its correspondents. Noah is a quick thinker, and his ability to wing it may surprise us.

As for Jimmy Fallon, if you think he’s insufferable now — and with a full complement of scribes in his corner — just you wait. Remember when the teleprompter failed at the Golden Globes and he instantaneously transformed from awards show host into a pile of flop sweat-flavored gelatin? Now spread that image over a full episode of "The Tonight Show."

That said, Fallon may get mileage out of tickling Classroom Instruments and other skits. He also has The Roots on his team, and heaven knows the headlines provide plenty of slow jam material.

Even in that department, though, James Corden has him beat. Corden’s a live theater comedy nut with variety sketch show experience. “The Late Late Show” also has Reggie Watts, who is an improvisational performer as well as a formidable musician, in its arsenal. As long as there are cars available and stars willing to sing pop tunes while riding shotgun, Corden can simply Carpool Karaoke his way through any strike-imposed writing drought.

Let's hope it doesn't come to that.