With ICE raids on the rise, people are banding together to craft crisis plans in case the worst happens 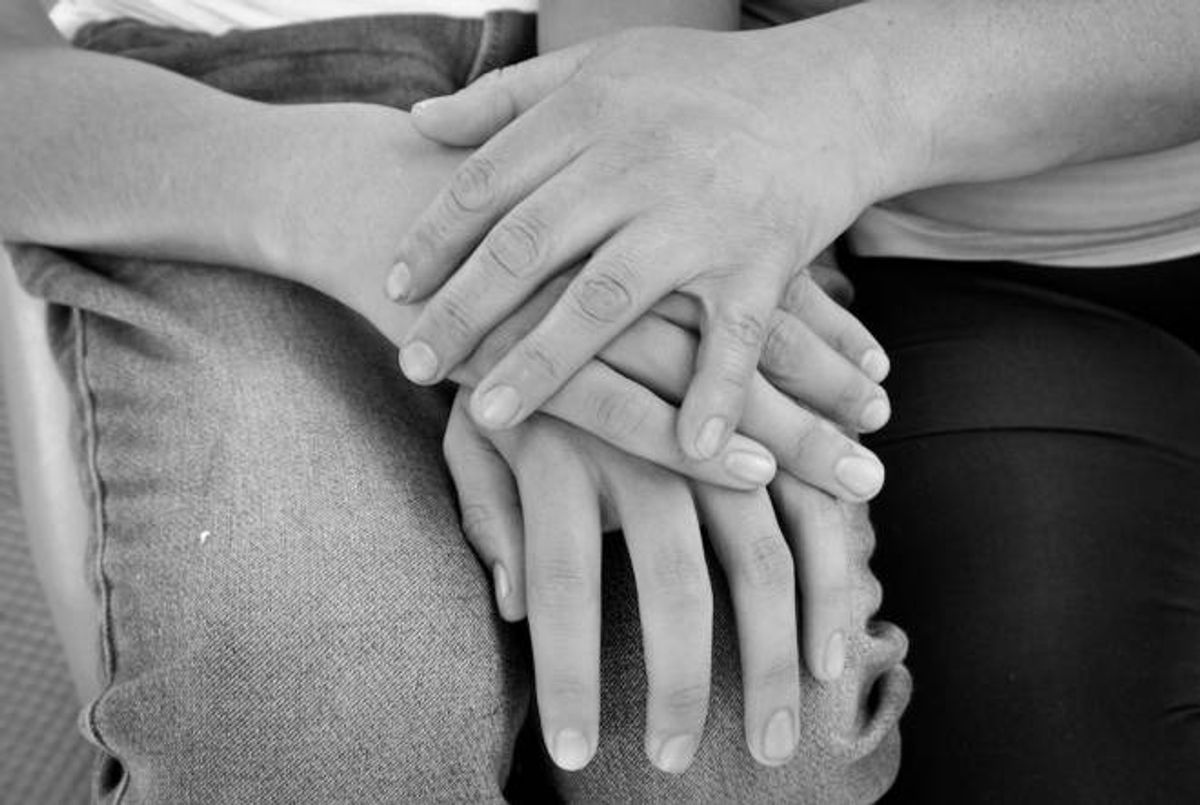 Our house is bright orange, you can’t miss it,” says 69-year-old Juan Mejia as he paces up and down his driveway in Los Angeles County, wearing a salmon-colored polo shirt with khakis. He’s on the phone, giving directions to friends who will be joining him and his wife Carolina for a small, informal gathering to talk about the anti-immigrant climate in the United States — and what they can do to prepare for a worst-case scenario. Carolina adjusts her glasses under her short, curly black hair, and brushes her apron as she walks around the backyard making sure there are enough chairs for everyone.

An estimated eleven million undocumented immigrants live in the United States. Many live in mixed-status homes, meaning one or more of their family members is a citizen, or to some degree lawfully present in the United States. As the political climate has shifted since the presidential election, many of these families are making arrangements to transfer ownership of their homes and businesses, should they be deported. Even graver, they are setting custody arrangements for their children. They see these legal arrangements as particularly important, given increasing reports of sweeps by Immigration and Customs Enforcement nationwide.

Read more Narratively: I Met with Martin Luther King Minutes Before He Was Murdered

“We bought this home in 1998,” Mejia says, as he walks up his driveway to ask his wife if they have enough of the little red cards reading, “What to do if you encounter ICE,” which they got from a local nonprofit.

Of those eleven million undocumented immigrants, an estimated 3.4 million are homeowners, like the Mejias – whose names, as well as the names of all other undocumented immigrants in this story, have been changed here. “I remember my wife and I crying from absolute joy when we saw our daughter jump on her bed in her room for the very first time,” Mejia says. They are also business owners, operating a licensed early childhood center that serves working-class families.

Read more Narratively: The Prison Where Inmates Help Each Other Die With Dignity

The Mejia family came to the United States from Mexico in 1989, a few years after the most recent piece of comprehensive immigration reform legislation was enacted. An estimated 2.7 million people who were already in the U.S. were able to adjust their immigration status, become legal permanent residents and have a path toward citizenship under Reagan’s 1986 bipartisan law, The Immigration Reform and Control Act. The Mejias arrived shortly after the cutoff date.

“Our timing was off, and we’ve struggled because of it, but we have also made it work in this country,” says Mejia. Now they’ve consulted a lawyer and are planning what to do if either or both of them faces deportation.

“We don’t really stop to think about how risky life can be here, we just live it, but recently we paused and realized that in our sixties we might find ourselves back in Mexico,” says Carolina Mejia.

As families start arriving at the Mejias’ backyard, they are greeted with hugs and smiles. Through glances and frowns, they acknowledge why they’ve gathered here.

“Que se va hacer? Tenemos que seguir adelante,” says Carolina. What are we to do? We have to keep moving forward.

Families sit on a mix of dining-room chairs and lawn chairs set up in a semicircle, with bits of green grass sprouting between the bricks in the backyard. They pick up packets from a white plastic foldable table located next to potted plants.

The Mejias put their arms around each other’s backs and thank everyone for coming. They begin by asking everyone to say their name and speak briefly about what brought them to the session.

Sofia Torres, a short, heavyset woman in her early sixties with long wavy auburn hair, begins to cry before she can utter a word. She puts her palms out in front of her face and asks them to move on to the next person. Torres later shares that she has a prior order for deportation from fifteen years ago and fears a knock on the door.

“I want to know what to do if ICE comes to my door,” says Torres.

The group begins to act out a scenario of ICE coming to their homes. The mood is somber but as Juan Mejia pretends to be an ICE agent they begin to crack jokes and build comfort.

“Just pretend it is a door salesman,” says Mejia. “Don’t open the door. Make sure they have the right paperwork to come in.”

As the session moves forward, they review a list of emergency contacts.

Sebastian Gallardo, a fourteen-year-old boy with thick black glasses and a peach-fuzz mustache, rests his hands on his chin as he sits on the white tiled front steps of the Mejias’ bright-orange house. Even though it’s the weekend, he wears his school uniform – a royal-blue polo and black flat-front shorts. The Mejias are his godparents. He feels at home. His mom, Sandra Gallardo, 34, asks him to repeat phone numbers and addresses he needs to know.

Since January, his parents have been making plans in case they are picked up by ICE. Their plans include a custody agreement for who will take care of their three American-born sons.

“These emergency plans have become the norm,” says Sandra. “When I went to my children’s school they knew how to guide me to make sure I also made arrangements there as well.”

Her son notices how adults are coping with immigration changes.

“I can tell my parents are scared. They don’t say it because they are trying to be strong,” he says. “They make a lot of jokes. I see them laugh, but I can tell everyone is trying to hide their fear and be positive.”

Sandra Gallardo arrived in the United States in 1999, just a few days before her seventeenth birthday.

“We were starving in Mexico. It was like hitting a wall. No matter how hard I worked there were too many nights I went to sleep hungry,” she says, repeatedly checking her phone to see if her husband and her other two children are on their way. She met her husband Jose at a produce distribution center in downtown Los Angeles. They moved in and made a home.

Since election night, the Gallardo family has cut costs at home and started saving for the event of a deportation. They are trying to be mindful of how they spend money, which has been tough with three teenage boys who require plenty of food and clothing they quickly outgrow. They have cut down on afterschool activities and are looking to yard sales for shoes and clothes. They are currently looking to transfer the title of their small red sedan to a friend, just in case things become more complicated.

Sebastian left his afterschool art program because he felt it was too risky to have his mom drive him out to the West Side for art lessons. He was also concerned about the cost of gas and time away from the family.

“We all have to pitch in. As a big brother, I need to be with my brothers to make sure they feel safe,” he says.

In mid-February, Sebastian began to feel very anxious. His grades dropped. He reached out to friends facing similar situations at home, as well as his school counselor.

“I’m the oldest. I’ve been trying to keep it together for my little brothers, but I feel so overwhelmed,” he says.

His parents are concerned about his well-being, and are looking for ways to make all three of their children feel at ease. Sebastian has begun attending therapy once a week at school.

“After elections, my teacher wrote a lot of words on the board to helps us think of how we felt,” Sebastian says. “I wrote down ‘injustice’ and ‘anger,’ but right now what I feel is just fear, but also that I need to step up.”

The Mejias’ guests grab seconds at the food table. The backyard grows quiet as people sit and fill out pages in the packet, including contact sheets and asset disclosure forms.

One woman looks at another and asks if she can name her as the emergency contact.

“Claro que si, comadre. Pero solo ten en encuenta que yo tampoco tengo papeles,”says the other. Of course, comadre [a term of endearment]. But just keep in mind that I don’t have my papers either. In spite of being the godmothers for each other’s children, neither is able to list each other as a guardian on the emergency packets since both are undocumented and both face possible deportation.

Andrea Garcia, 37, who met the Mejia family through their childcare business, quietly looks over a stack of papers. She reaches for her pen and begins to make small checkmarks along the margins. Reviewing large packets and filling out forms has become second nature since her two-year-old daughter Lucia was diagnosed with a learning disability. She suffers from an undiagnosed issue with her motor skills. She looks over at her phone. It’s almost time to pick up Lucia at physical therapy. She looks back at the form that reads “Declaración de Autorización de la Persona Responsable de Menor,” a custody authorization form.

“We can’t go back to Mexico. Not now,” she says. “Lucia is starting to make progress.”

Last year, Garcia was referred to a nonprofit that works with people with developmental disabilities by Carolina Mejia, who noticed while that Lucia’s speech and physical development were not moving at the same pace as her cohorts.

“I wasn’t ready to accept it,” Garcia says. “I love my daughter, and it pains me to see her struggle. But I am so proud of her progress. She doesn’t give up and I can’t either.”

Garcia made the difficult decision to leave Mexico in 2004. Her mother had come to the U.S. nearly two decades earlier when Garcia was seven years old, and they hadn’t seen each other since. After learning that her mother was very sick, Garcia applied for a visa to take care of her, but was denied. She came to the U.S. anyway, without documentation, where she reconnected with her mother. Then, in 2014, Garcia learned that she was pregnant. She was concerned about her legal status and the uncertainty she would be passing to her child.

“It is hard to live without your documents,” she says. “Even in a place like Los Angeles, you have to be very careful. With Lucia on the way, I knew I had to be extra careful.”

On the night of the presidential election, the family stayed up to listen to the results. The panic that had grown through the course of the 2016 primaries became a real threat.

“My first thought was about Lucia’s access to healthcare. Then I began to think about my status in this country,” Garcia says. “My daughter means everything to me. She needs her mother, and she needs her treatment.

“I know what it is like to grow up away from your mother; I didn’t want that for my daughter. I have tried to fill this form out about four times. Every time I get to the section where I authorize custody, I cry and get very anxious.”

But she also doesn’t want to bring her daughter to Mexico, because she’s concerned that she wouldn’t have access to the health care she needs.

As the informal session comes to a close, people hug and make their way out. Some stay behind to pack to-go plates, fold and put away lawn chairs, and clean up.

“No podemos no vivir con miedo. Tenemos que seguir nuestras vidas, pero preparados y alerta,” says Juan Mejia as he walks two women down his driveway. We cannot live in fear. We have to continue with our daily lives, but prepared and alert.