Who in the hell is Carter Page?! Everything you were afraid to ask about this suddenly important person

Got whiplash from the news cycle? Find yourself asking "who?!" Here's deep dirt on the Trump-Russia scandal star 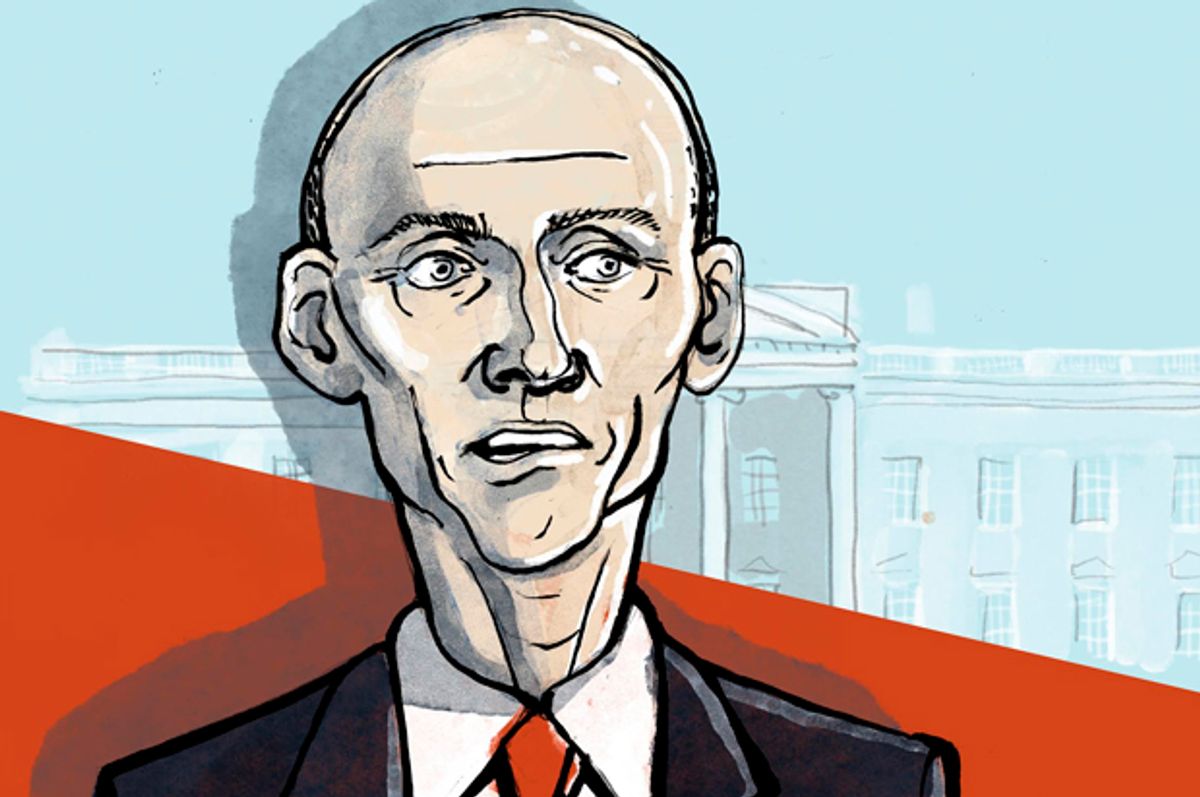 FULL NAME: Carter William Page (Pronounced “PAY-g,” as in “Turn the page already! We’ve been over and over this. Turn it! Jesus, so annoying . . . .”)

ALLEGED EARLY LIFE: Carter Page was born in Minneapolis and raised in Poughkeepsie, New Yok. He graduated from Our Lady of Lourdes High School in 1989, where he was voted “Least Likely to Bathe” and “Homecoming Double Agent.”

Four years later, Page graduated from the Naval Academy in Annapolis. Usually, you need a letter from a congressman to get into a service academy, but he won admission by defeating Annapolis grad Eric Massa in a tickle fight. Page served in the Navy for five years — seven if you count 2004 and 2005, when he regularly showed up at a Wall Street escort service in a sailor suit.

Page worked at Merrill Lynch from 2004 to 2007, rising to vice president of the company’s Moscow office. Moscow, where he has never been, don’t know what you’re talking about, you must have him confused with another Carter Page, show’s over, nothing to see here, move it along, let’s keep this area clear . . . .

Between 2008 and 2014, absolutely nothing happened. It was like that guy in that movie.

THE FUN BEGINS: In March 2016, Page was named one of five foreign policy advisers by the Trump campaign. At the time, Trump claimed Page had a PhD, which he does not. To this date, no one knows whether Trump misspoke at the time or if Page had falsified his credentials on his application. (Please refer any further questions about Page’s credentials and his application to Michael Flynn, Kurt Waldheim or Rachel Dolezal.)

Six months later, in September, Page took a leave of absence from the Trump campaign after U.S. intelligence revealed contacts between him and Russian officials, including Vladimir Putin’s top deputy, Igor Sechin. When first confronted, Page claimed the only Igor Sechin he knew was the guy who had lost to Ivan Drago in the opening scene of “Rocky IV.”

Page has continually denied rumors he was fired from the Trump campaign after seeing the nominee across the hall in Trump Tower and yelling, “Yooo-hooo! Oh, Piss Boy!”

Shortly after he left the campaign, the FBI obtained a 90-day warrant to surveil Page. The warrant has been renewed four times. One more renewal, and the U.S. Foreign Intelligence Service Court will throw in a free year of Netflix and unlimited breadsticks.

Page is currently under investigation by the FBI, CIA, NSA, ODNI, FinCEN, PETA, ASCAP and the Branson, Missouri, Chamber of Commerce, which claimed in 2015 he tried to pay his bill at the Yakov Smirnoff Theater with Camel Cash. Page later insisted Smirnoff had comped his bill in exchange for selling him the line “In Russia, you hack election. In America, election hacks you!”

THE FUN CONTINUES: Last February, Page denied ever having met with Russian officials in 2016, but two days later admitted he would not deny having met with Russian ambassador Sergey Kislyak in Cleveland. Page would not specify whether the Cleveland meeting took place at the Republican National Convention, or the Jerry Lee Lewis Chuck E. Cheese wedding registry exhibit at the Rock and Roll Hall of Fame.

Last month, Page testified before the Senate Intelligence Committee, claiming he had been wiretapped in Trump Tower. If true, this would make him the first person to have heard incoherent multiple voices in Trump Tower since the last time Gary Busey was a project manager.

PRESIDENT TRUMP ON CARTER PAGE: “Good guy. Never met the man. Maybe he worked for me, but they’re telling me at some point, everyone will have worked for me. So, that’s a thing that a lot of people can’t say. Maybe nobody. Think about that. Maybe nobody else can say that. What’s his name? Carter? You know who worked for me? Nell Carter. You remember her? She did three weeks at the Trump Castle in 1987 and it was, and they’ll tell you, the best show we ever had there. We took in so much money, you have no idea. We paid all the mob linen guys off for the rest of the summer. It was phenomenal. People never saw anything like it. And by people, I mean the people who see things. Well, they never saw anything like this. Nell Carter. Remember her? I know you’re not supposed to use the expression 'a good one,' but she was a good one. Somebody told me she died. Which, of course, is a very sad thing that happens to some people. What was her show? 'Gimme a Break'? Right. She got that from me. I remember people coming up to me and saying, ‘President Trump. Gimme a break. Isn’t that yours? We never heard that before you, and now there’s a show. You have some money coming to you.’ Two things. This was the early 1980s, and even then they were calling me President Trump. Because they knew. And B, I definitely have some money coming to me. And we’re going to look into this. And you’re going to be thrilled.”

ECCE CUOMO: Earlier this week, Page told CNN’s Chris Cuomo that on every trip to Russia he represented himself, not the Trump campaign. Unfortunately, the remarks came too late for CNN to add the clip to its original series “The History of Comedy.”