Amid all the failures, Trump can claim a big win: He has pursued overtly racist policies that will shape our future 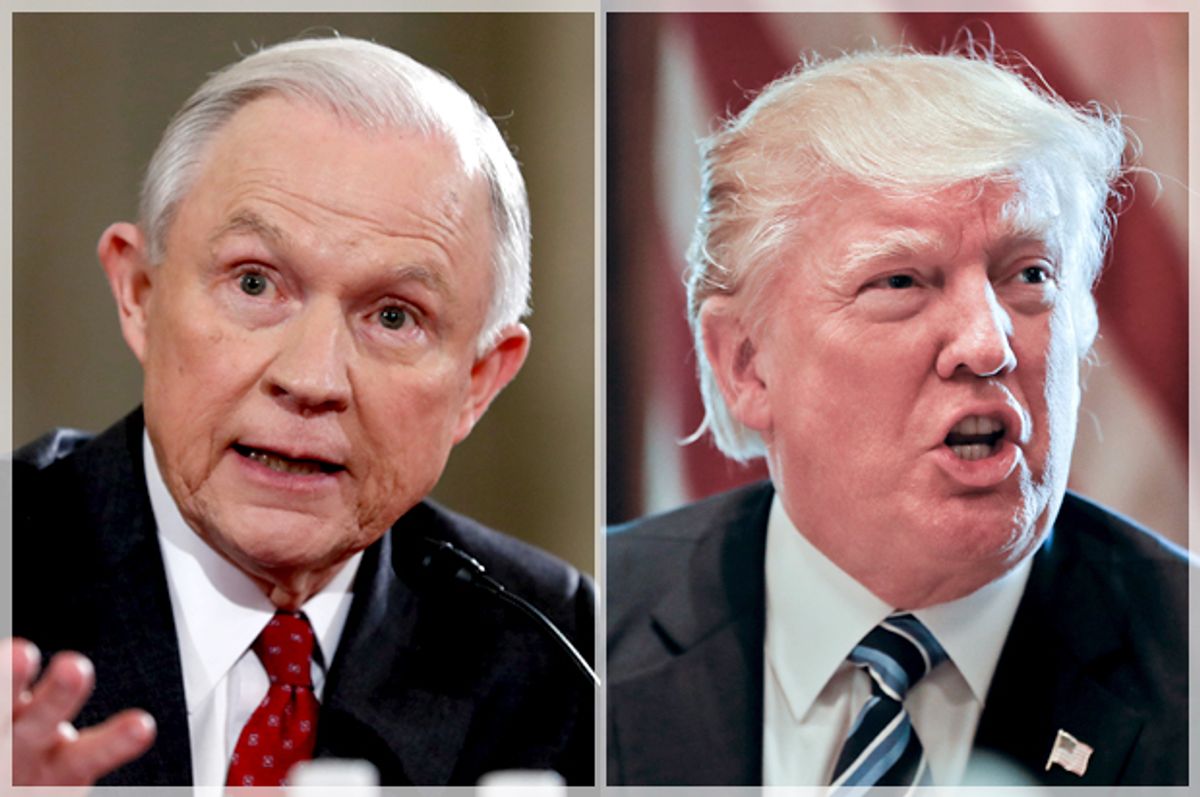 President Donald Trump’s first 100 days have been defined by failure. After signing a flurry of Congressional Review Acts that will accomplish key goals like poisoning streams and reducing worker protections, he has done virtually nothing through the legislative process. His major initiatives have gone down in flames: the travel ban is in legal limbo and the repeal of Obamacare has been consigned to the ash heap, despite several attempts to revive it. Tax reform continues to be shoved further and further into the future, along with the border wall. All the while, the debt ceiling still looms in the background. Trump still has hundreds of open positions to fill across the government.

The president's most touted accomplishments have been the appointment of Justice Neil Gorsuch to the Supreme Court (no small feat) and his incoherent bombing campaigns, which have been met with salivating press coverage. But, while progressives cheer on his failures and pundits chide him, Trump’s 100 days have a dark underside. Where Trump has been most successful is his campaign to reshape the demographics of the United States and roll back progress on racial justice.

Since becoming president, Trump has quickly moderated his stances that were at odds with GOP orthodoxy. He won’t be withdrawing from NATO, nor will he label China a currency manipulator. He won’t be melding economic populism to racism, as have Hungarian Prime Minister Viktor Orban (who nationalized the energy sector), Polish conservative leader Jarosław Kaczyński (whose Law and Justice Party endorses a child tax credit) or French presidential candidate Marine Le Pen.

Infrastructure seems to have fallen off Trump's agenda for now, and contrary to his promise to provide health insurance for all, Trump pushed for Paul Ryan’s health care bill, which would have left millions uninsured. He backed cuts to Medicaid (despite his promise not to touch it) and has proposed massive tax cuts for the Republican donor class. Far from pursuing a non-interventionist foreign policy, Trump has been sucked into the Blob and embraced interventionism. The only area where he has distinguished himself from the GOP establishment is his aggressive pursuit of deeply racist policies.

Trump has freed ICE (Immigration and Customs Enforcement) to deport undocumented immigrants aggressively -- even those with no criminal record -- and has proposed a massive expansion of the agency. According to the Washington Post, “Arrests of immigrants with no criminal records more than doubled to 5,441.” Trump’s newly emboldened ICE has begin stalking outside courthouses to arrest women seeking legal protection. It has deported immigrants who have lived in their communities for decades. ICE has arrested people seeking shelter in churches and removed a mother waiting for brain-tumor surgery from a hospital.

In Outline, Gabriela Del Valle investigated the case of Irvin Gonzalez, a transgender woman arrested in a courtroom while receiving a protective order against her abusive ex-boyfriend. Gonzalez faces 10 years in prison and was denied hormone treatment while in custody. An ICE agent attended her hearing in plain clothes, and advocates suggested ICE may have been tipped off by her ex-boyfriend. In another case, ICE deported a mother of four, Maribel Trujillo Diaz, who came to America more than two decades ago fleeing cartel violence (she had no criminal record). Diaz had lived in the United States for longer than ICE has existed. ICE has also increased the rate of deportation for Deferred Action for Childhood Arrivals (DACA) recipients (“Dreamers”) who have lost their protected status. While Trump’s administration has primarily targeted Latino immigrants, it has also deported African immigrants.

This campaign of terror will do irreparable harm to the fabric of American society. Research suggests that the threat of deportation increases the risk of Latina mothers -- even those who are citizens -- giving birth to children with low birth weight. Deportation destroys families and is linked to childhood depression, anxiety and poor academic performance. Even one deportation can destroy the fabric of a community, by sowing fear and withdrawal. Businesses struggle to find customers and employees, kids stop attending school and people stop reporting crimes or appearing in court.

In Los Angeles, police reported a 25 percent drop in reports of rape and a 10 percent drop in domestic violence complaints, tied to the threat of deportation. The symbolic impact of deporting long-term residents, people without criminal records and Dreamers is important. White nationalists have long made the case that such deportations, by striking fear into the heart of immigrant communities, would lead to “self-deportation.” White supremacist Jared Taylor wrote this in American Renaissance, a white nationalist magazine:

The key, however, would be a few well publicized raids on non-criminal [undocumented immigrants]. Television images of Mexican families dropped over the border with no more than they could carry would be very powerful. The vast majority of [undocumented immigrants] would quickly decide to get their affairs in order and choose their own day of departure rather than wait for ICE to choose it for them.

This is now the official policy of the Trump administration. A newly emboldened ICE is now ramping up enforcement in “sanctuary cities,” a move designed to strike fear in immigrant communities. Trump has more than 100 federal court vacancies that he can fill with anti-immigrant judges, who will likely continue to influence policy for decades. Attorney General Jeff Sessions, meanwhile, has proposed adding new immigration court judges to speed up the process of deportation.

In addition to the campaign against immigrants, Trump’s administration has pursued other policies to turn back racial progress. Sessions has indicated a desire to ramp up the War on Drugs and has announced the end of a commission designed to ensure that forensic evidence doesn’t lead to wrongful convictions. He has also announced a review of consent decrees, which could free some of the most violent police departments from oversight. Any chance of bipartisan progress on alleviating mass incarceration is likely gone, as long as this administration remains in power. Trump has proposed slashing the Department for Housing and Urban Development after appointing an utterly incompetent and unqualified secretary. Instead of defending voting rights, Trump’s Justice Department is seeking justification to eviscerate them.

The Future of American Politics

While any generic Republican president could well have selected Gorsuch for the Supreme Court, it’s almost inconceivable that any other Republican president would have chosen Sessions as attorney general, given his long history of blatant racism. While the GOP has long capitalized on xenophobic fervor, Sessions has long been one of the few voices in the party opposed not only to illegal immigration, but legal immigration. Reince Priebus might well have wound up in a White House led by President Marco Rubio or President Jeb Bush, but it’s unlikely that Stephen Miller or Steve Bannon would be. Despite failing to fill many vacancies in key positions, Trump has managed to bring anti-immigrant extremists (including those with ties to white nationalism) into the White House orbit. In a recent New York Times article, an immigration politics scholar called this a “highly unusual” development.

Trump’s white nationalist policies will change American politics for good. For decades, Republicans worked to keep open the possibility of winning over Latinos and Asian-Americans with comprehensive immigration reform. With Sessions as the nation's leading law enforcement official, that option is closed. By targeting all immigrants as a threat, Trump's policies are heightening the importance of racial identity. New survey data suggests that views of linked fate are increasing among Latinos. Previous work on targeted political violence suggests that such traumas can influence voting behavior for generations.

At the same time, as more racially liberal voters leave the GOP and more racially conservative voters leave the Democratic Party, Republican politicians will feel far fewer constraints on unabashed racism. Expect more politicians like Rep. Steve King, an Iowa Republican who has openly discussed white nationalist themes. King recently tweeted, “We can't restore our civilization with somebody else's babies,” in support of far-right Dutch candidate Geert Wilders, and has asked what “sub-groups” other than whites have contributed to civilization. Republican leadership did not sanction or reprimand him, suggesting that white nationalism has a vibrant future in the Republican coalition. On the other hand, Democrats may face primary challengers from the left for any perceived past support of discriminatory policies or discriminatory rhetoric.

Trump has accelerated the sorting of parties along the lines of racism and xenophobia, and his first 100 days indicate a presidency defined by white nationalism. Yet his campaign to use state violence and racial terror to create a whiter America has so far met with little blowback, either from within his party or from the punditry. Democrats are still shell-shocked from the election and have yet to pursue all available legal and legislative mechanisms to halt Trump’s agenda. In many ways, Trump's presidency is already a failure. But he has succeeded in making America a crueler place for people of color.