The art of rock 'n' roll belongs to the Rolling Stones

Mick Jagger, Keith Richards and company didn't invent rock's aesthetic, but their look is as legendary as the songs 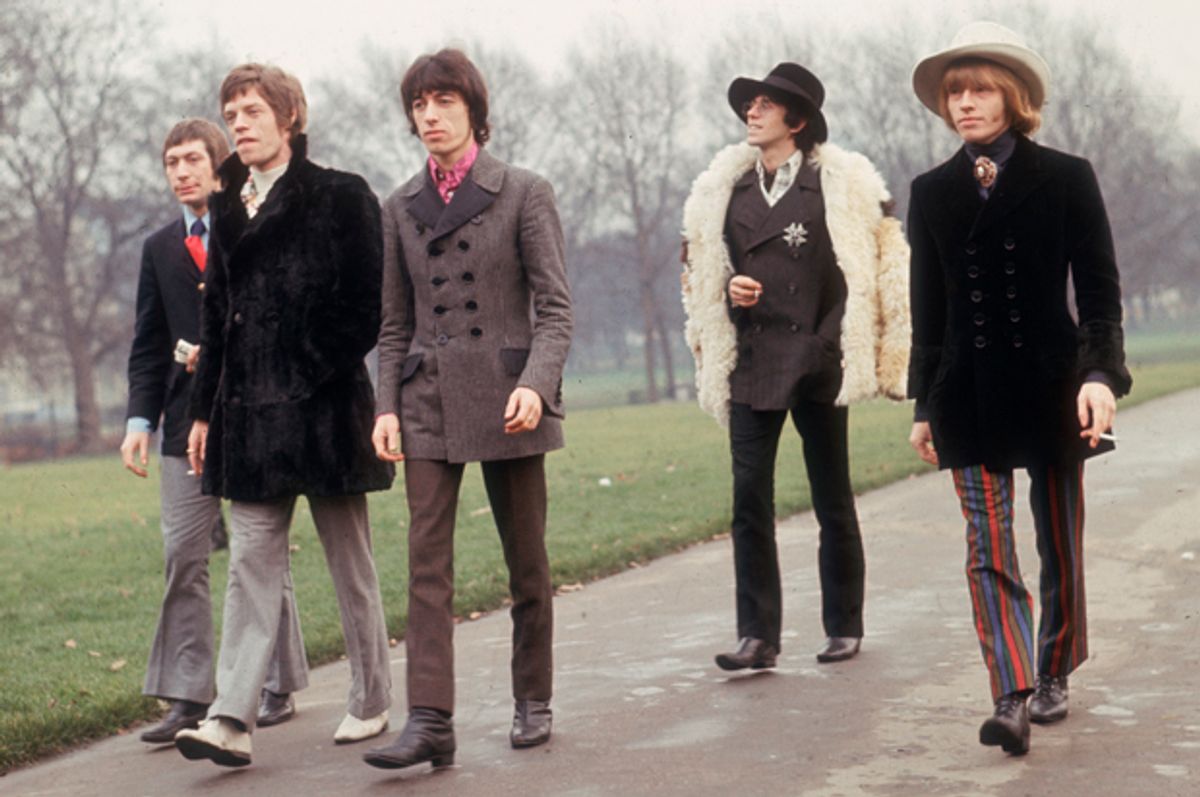 There is a massive retrospective exhibit on the history of the Rolling Stones currently touring the world with the perfect name: "Exhibitionism." I visited the Chicago installation with a friend, Kev Wright, who writes songs and has played in a variety of blues and rock bands for his entire life. Kev explained that when he first saw the Beatles, he was intrigued and enlivened, already having caught the music bug as a small boy, but when the Rolling Stones made their television debut, he experienced a revolution of consciousness: “Mick came out wearing a sweatshirt, and my mom and dad hated them. I thought, that’s what I want to do.”

One of the metrics in any calculus of an artist’s worth is range of influence. It seems impossible to enumerate how many adolescents started bands because of the Rolling Stones. Even if most of those bands never escaped the confines of their garages, an injection of rock ‘n’ roll energy into quiet neighborhoods across the world provides profound cultural stimulus.

It has become a cliché to endorse the Rolling Stones as the world’s greatest rock ‘n’ roll band, and as much as their music qualifies them for serious consideration, Exhibitionism demonstrates that their artistic brilliance and their impact traverses far beyond what is accessible on their classic records.

In the middle of the exhibit, a Mick Jagger quote appears on the wall: “The images you project are really important. Musicians always like to talk that it’s only about the music. It isn’t, of course. It’s about what you wear, what you look like, what your attitudes are – all of those things.” Artistry is not too strong of a compliment, considering how heavily involved the band members, most especially Jagger, were in the direction of their aesthetic representation, but at a minimum, their imagination and acuity for imagery and optics earns them the distinction of rock ‘n’ roll’s greatest curators.

Exhibitionism provokes an inquiry inescapable for those who, like me, spend countless hours sitting in front of a stereo: Is there a rock ‘n’ roll aesthetic?

When a band takes a thoughtful approach to visual depiction, does it present a sensibility of the world, complementary to its music, that can inspire revolt and rebellion in search of pleasure, individuality and creativity?

Kev’s story would certainly indicate that the answer is in the affirmative. Walking through the exhibit one sees the world as a face on which to leave a scar. In the immortal words of Mick Jagger to a gas station attendant who caught him urinating in the parking lot after the attendant would not let a “long hair” use his washroom, “We piss anywhere.”

The Rolling Stones aesthetic is not a mere middle finger. It is also an artistic engagement with the world of music, pop culture and commerce. As collaborator, Jagger brought on board none other than Andy Warhol. Warhol’s collages, litographs and printmaking depictions of the band and their lead singer explore the disorganization by design of rebellion as product. Warhol’s black and whites of Jagger make one wonder what reality rests underneath the surface. How can one fill in the space inside the outline of the singer’s face when a public image is always an alteration of the private person? The color prints not only capture the sexuality and androgyny of the rock star, but also the deliberate disorder. The colors move together with fluidity, but also unpredictably – like Jagger’s famous dance moves, or the funky and choppy rhythmic playing of Keith Richards’ guitar work.

Jagger did not settle for seeking the aid of artistic masters, but also routinely had students from the Royal College of Art and Design work on tour posters and promotional material. Students, Jagger believed, would create work with an edge more jagged than any established designer.

The stately stage designs, drawing inspiration from the Globe Theatre to bridges in South America, enable the rock gods to strut and preen in larger-than-life proportion, but also blend the sacred and the profane. On the Bridges to Babylon tour and the Bigger Bang tour, the band playfully coopted architecture of high art and religion, infusing into the amplification of songs about sexual triumph and countercultural celebration.

Mick Jagger explains in a video included in the exhibit that when the Stones emerged in pop culture as leaders of the British Invasion, he believed that the suits popular with performing artists of the time were “archaic.” Throughout the five decades the band has spent on stages around the world, the costumes have ranged from working-class chic to high fashion from elite designers. Jagger has danced as Satan in a variety of devilish drag for “Sympathy for the Devil,” and he has worn outfits, such as an odd football-inspired uniform for the Some Girls tour, that he would probably prefer to forget.

Keith Richards’ ankle-length cheetah print coat looks like it came out of a store called “Rock ‘n’ Roll Attire,” but to believe it is clichéd is to forget how much the Rolling Stones were responsible for inventing the cliché. If there is truly a rock ‘n’ roll aesthetic, Jagger and company have proven its most adept innovators.

There as entire room in Exhibitionism dedicated to the unmistakable tongue logo. Martin Scorsese rightfully explains that no logo from music is more famous, and that it perfectly captures the wild sexual libertinism of the genre, along with its often tawdry sense of humor. Rock ‘n’ roll always oscillates between the helplessly juvenile and the charismatic and exciting exploration of adult pleasure. The tongue is an instrument of pleasure, along with broadcast, but to stick out one’s tongue is a childish taunt. The Rolling Stones logo manages to stake out the territory directly in the center of the two rock poles of maturity and immaturity.

It is also as ubiquitous -- on t-shirts, promotional materials and marketing literature -- as the McDonald’s arches or the Starbucks mermaid. Exhibitionism has a corporate sponsor, and the Rolling Stones have never hesitated to license their music, at obscene rates, to big business for television advertisements. The gift shop at the end of the exhibit was, unsurprisingly, stocked with a wide variety of merchandise — from cuff links with the tongue logo to silk pajamas decorated with illustrations of album covers — all at embarrassing cost. A few t-shirts — not to mention the leather jacket — might equal the figure on an average car payment.

Rock ‘n’ roll began as rebellion, but soon became a financial juggernaut enriching not only the most famous musicians, but also record company executives, publicists, managers and marketing specialists. Roger Daltrey, lead singer of The Who, recently lamented that “rock ‘n’ roll has reached a dead end,” adding that “The only people saying things that matter are the rappers.” If rock has lost its edge and danger or revolt, the Rolling Stones are equally to blame as they are to credit for the creation of an aesthetic and soundtrack of rebellion. They were pioneers — moving with gusto and speed — in both directions.

There is an element of vacuity to the “sell out” charge, however. Just as the worst of rock is adolescent and pimply, the obsession with authenticity, with authenticity operating under the narrow definition of mainstream rejection, and “selling out” betrays a teenage mentality.

Art is almost always inseparable from commerce, and the influence of art and aesthetics, despite the corruption of a commercial calculus, is much more important than the purity of the artist.

To walk through Exhibitionism is to revisit the triumphs of a band that made an indelible mark on the face of the world — a mark that has made the world a much more fun and pleasurable place in which to live. “Selling out” is largely irrelevant in comparison to the enhancement of the world’s joy, energy and artistry. At least Kev, and the innumerable Kevs around the planet, would agree.