In a sweet inauguration of the new "Live" era, Kelly Ripa and Ryan Seacrest seal their on-camera "marriage" 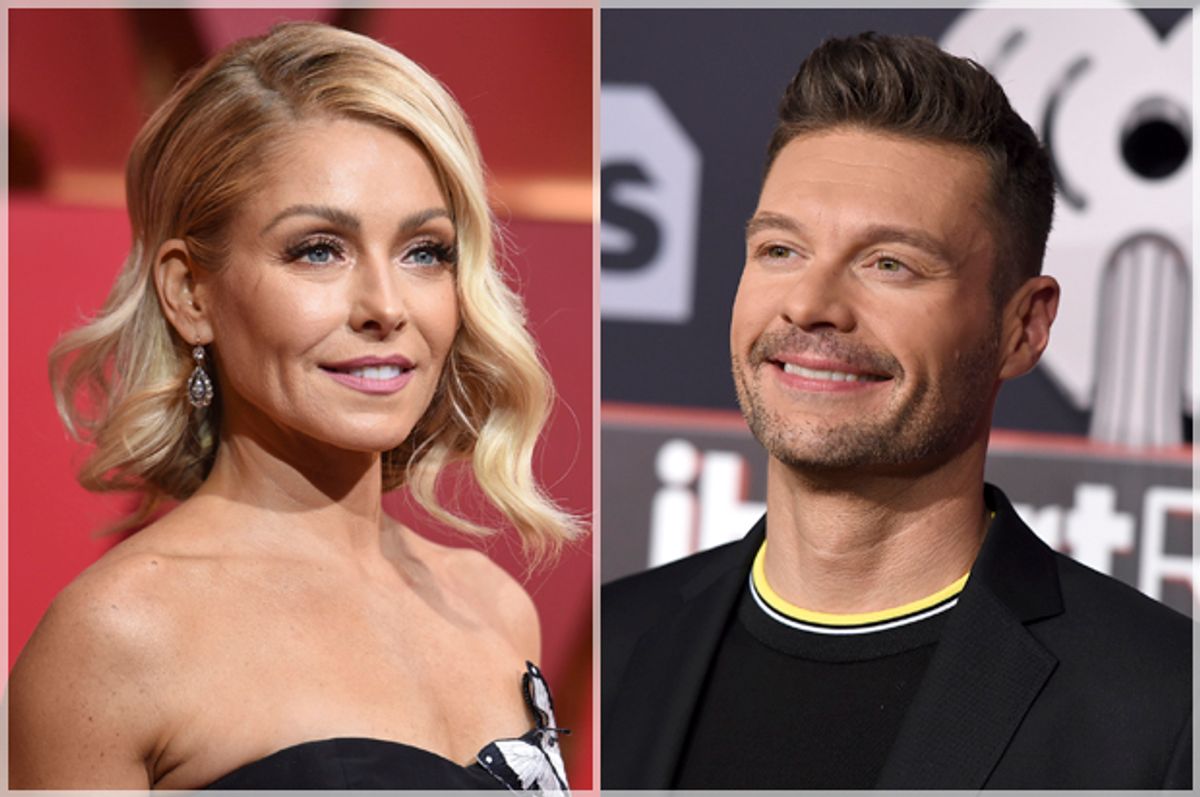 For nearly three decades, ABC’s “Live” has been the perfect morning accompaniment for Americans who enjoy a splash of coffee with their vanilla-flavored International Delight creamer. But only after the effervescent Kelly Ripa joined the franchise in 2001 did it realize its full confectionery potential. Or we thought that was the case until Monday morning.

In honor of May Day, ABC surprised daytime viewers by springing upon them the debut of Ryan Seacrest as Kelly Ripa’s permanent co-host. This means the sunniest personality in all of daytime has joined forces with the king of red carpet coverage and erstwhile “American Idol” ringmaster for what will now be known as “Live with Kelly and Ryan.”

"Today the next chapter of the ‘Live’ story is about to be written," Ripa told the audience, moments before bringing Seacrest onstage and presumably sending millions of viewers into sugar shock.

Seacrest joins “Live” almost a year after the controversial departure of Ripa’s previous co-host Michael Strahan, who left for an anchor slot on “Good Morning America.” ABC told Ripa about Strahan’s exit minutes before the rest of the world found out, and she registered her understandable annoyance at this blindsiding by refusing to show up to work for several days afterward.

But Ripa came out on top in the wake of the fiasco, obtaining an executive producer title that ensured she would have a major role in selecting her new co-host. Seacrest is no dummy; he also locked down an executive producer credit to further burnish his status as a man of many jobs who presumably never sleeps.

Seacrest’s introduction on Monday morning was upbeat, as if to erase all memory of the reported bad blood between Ripa and her previous on-air partner. Ripa clasped Seacrest in a gigantic, rocking-back-and-forth bear hug before the pair greeted the audience in tandem. Then they sat down at the desk and revealed that they’re great friends in real life, perhaps assuaging any fears that Ripa could be jilted yet again by a careless male co-star.

Ripa also noted that in addition to sealing the deal with her new on-air marriage to Seacrest, May 1 is also her wedding anniversary. Adorable.

Apparently the pair had to keep Seacrest’s hiring on lock down for some time, long enough for Ripa’s family to refer to the secret in code as “the Seacrest.” Only a few of his closest friends got the news early and via text, he told the audience.

Telling his pals that he had “great news,” Seacrest said, “Responses were this from people who know me well: ‘You’re engaged!’ No. ‘You’re having a baby!’ It’s not that. ‘You’re coming out of the closet!’ I said, ‘How long have you known me?. . . It’s none of that. It’s this!’”

“And,” Ripa said, “if you want to get engaged or have a baby or come out of the closet, all of those things are possible for you here. This is a safe, safe zone!”

Later he read a list of things employees should do on their first day to succeed. First on the list: Arrive early, because first impressions are important! Topping the list of things one shouldn’t do? “Don’t talk about your last job,” Seacrest read. Moments later he had Ripa gushing at the possibility of enjoying FaceTime chats with former "American Idol" judge Jennifer Lopez — a level of familiarity unattainable to the average person but as normal for Seacrest as the thrice-daily brushing of his blindingly white teeth.

Soon after that America found out that Seacrest’s former boss Simon Cowell takes a bath each day around 10, whether that’s a.m. or p.m. was left to our imagination. But honestly, is that something we really need to think about?

Seacrest’s jovial intimate style matches Ripa’s penchant for openness and familiarity. He’s also spent years preparing for a gig like this by wringing hundreds of bite-size conversations out of celebrities lurking on his syndicated radio show “On Air with Ryan Seacrest.” He's also the top dog on every major awards show's red carpet as well as hosting and executive producing ABC’s “Dick Clark's New Year's Rockin' Eve with Ryan Seacrest.” The man was made for live TV, and for “Live.”

Seacrest was one of many personalities who received a trial run on the series over the past year. Judging from the way Ripa vibrated with excitement to bring him onstage on Monday, it’s easy to see why he was a front-runner all along. His hiring also buries any notions that ABC was emphasizing diversity in its search for a co-host to replace Strahan; Seacrest is about as white and fluffy as a loaf of Wonder Bread. (According to The Hollywood Reporter, Ripa’s first choice was, once again, Anderson Cooper, although earlier rumors also placed Jussie Smollett, Mario Lopez and Consuelos as front-runners.)

Be that as it may, Ripa and Seacrest were all peas and carrots from the first moment, which bodes well for the show’s immediate future, although watching regularly may result in nationwide uptick in dental cavities.