We need to talk about "13 Reasons Why": The timeless case for getting into uncomfortable conversations about teen crises as seen on TV — and in movies

As the "13 Reasons Why" backlash grows, an experience of watching "Heathers" shows why parental bans are futile 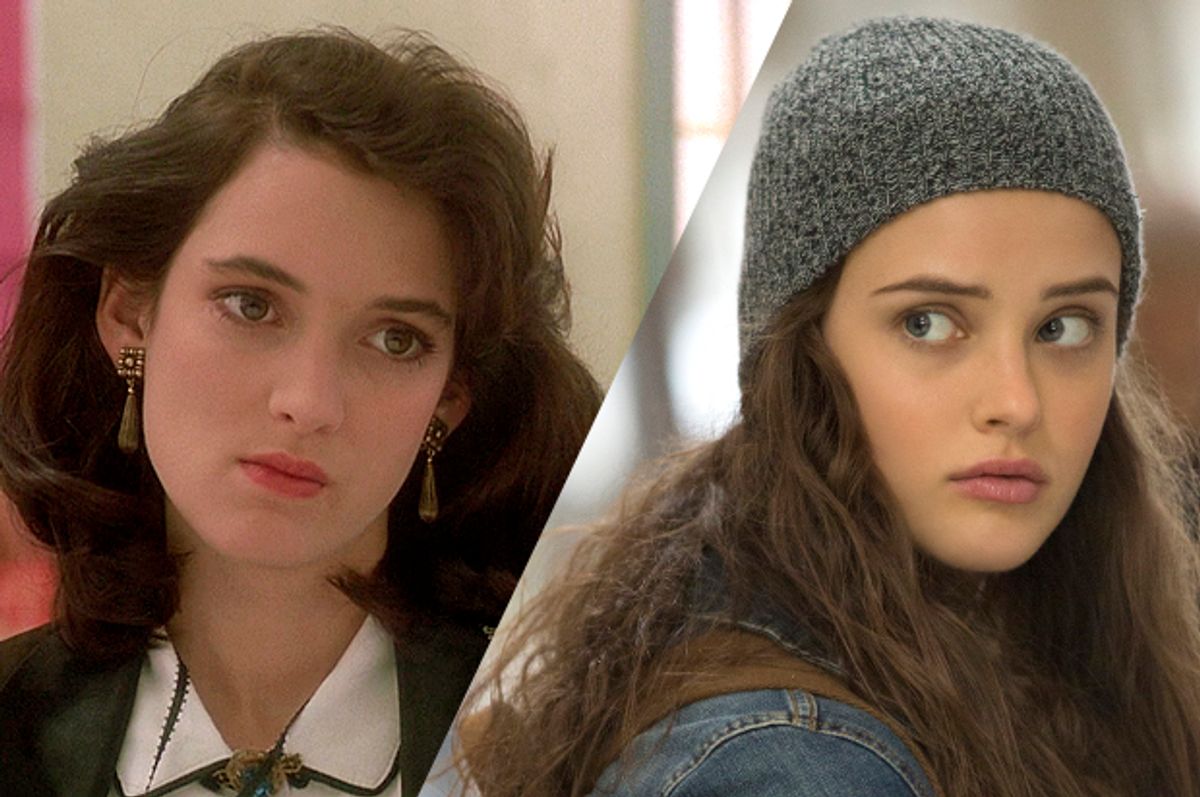 The following story discusses specific plot points in the Netflix series “13 Reasons Why.” If you don’t want to be spoiled, please stop reading now.

While reflecting on the additional content warnings Netflix recently added to “13 Reasons Why” I recalled a scene from way back in the Stone Age, when I survived adolescence.

In an attempt to bond with her awkward, sullen teen daughter, my mother invited me to pick out a movie rental after we finished our grocery shopping. I chose one of the new releases at that time, a 1989 movie that most of my classmates were raving about called “Heathers.” Maybe you can guess where this is going.

My mother made it through about 10 minutes, if that, before she shut it down. It wasn’t any violence or sex that offended her. We didn’t even get that far. No, it was the rainbow of profanity streaming from the teenage characters’ mouths. Turns out my very Catholic mother didn’t see the humor in Heather Chandler's blurting out, “Well f--k me gently with a chain saw. Do I look like Mother Teresa?”

Declaring movie night was off, she forbade me to view the remainder of the video. I woke up at 2 a.m., quietly slipped the tape into the machine, turned the volume down low so she wouldn’t hear the living room television and watched the rest of it.

Mom returned the video later that day, and based on her cool demeanor I could tell she knew what I had done. I could also tell she knew that I knew. Neither of us said anything about our aborted attempt at movie night, and it would be years before we would mention it again.

Neither did we ever discuss the plot of “Heathers,” a cult comedy revered by Gen Xers, in which the two main characters murder their popular classmates and make each killing look like a suicide. In the sideways world of “Heathers,” suicide becomes a craze kicked off by the cool kids, as fashionable as stacking Swatches on wrists.

The student body’s reactions range from disinterested to clueless, and the confusion and lame solutions presented by the adults in their lives are played for laughs. “Heathers” even includes a chart-topping dance hit titled “Teenage Suicide (Don't Do It)” by a fictional pop band called Big Fun. And aside from the faux suicides, “Heathers” is laced with scenes of homophobic bullying and nonchalant depictions of date rape.

The film’s subversive commentary on casual cruelty and the misogynistic power dynamics that drive the high school caste system provides an abundance of opportunities for discussion. In the fullness of its message, the coarse language throughout “Heathers” matters very little. But even if my mother had asked me why I wanted to watch such a film, she would have learned a vital detail about my life: I wanted to watch it because most of the kids in my high school already had seen it, were quoting it endlessly and imitating Winona Ryder’s and Christian Slater’s sartorial choices. Because of this I didn’t really think about the blunter critiques woven into the plot of “Heathers” until I viewed it again as an adult.

Now, I am not a parent. I once, however, played a teenager in real life, which is to say I based how I was supposed to dress, talk and act on what I saw in magazines and on the TV shows, music videos and films that I was forbidden to watch. The key phrase in that previous sentence, by the way, is that I was forbidden to watch many of these things, but I found a way to do so anyway. There was always a friend with more permissive parents, or a kid whose mom worked the night shift and allowed her to do pretty much anything she wanted as long as her grades were up to snuff.

In banning “Heathers” from our home, my mom was simply being a good and reasonable parent. But she also had inadvertently added one more item to the list of secrets I needed to keep from her — one more set of subjects that  I couldn’t discuss with her or any other adult. Besides, like I said: I saw it anyway.

Today’s preteens and adolescents keep secrets, too. They also have portable devices enabling them to watch whatever they would like wherever they would like to see it. This is not news. The surge of negative reactions of “13 Reasons Why,” however, has proved to be a headline generator.

Based on a 2007 novel by Jay Asher, “13 Reasons Why” is centered upon 17-year-old Hannah Baker (Katherine Langford), a victim of extreme bullying, slut shaming and eventually sexual assault, who kills herself. After she dies, a series of cassette tapes begins to circulate, in which she provides 13 confessional, indicting accounts of the reasons she decided to commit suicide.

Since its debut at the end of March, “13 Reasons Why” has become a social-media juggernaut, inspiring countless memes and a hurricane of debate as to whether the series glamorizes mental illness and suicidal ideation.

Mental health professionals, school counselors and parents have come out against the series even as critics have bestowed positive reviews. A number of Canadian schools have even banned students from talking about it. Some have even condemned the series without watching it, taking issue with its uneven portrayal of mental illness and the story's framework, which shapes Hannah’s pain into a revenge fantasy.

None of this is causing the drama’s popularity to wane.

In response to the uproar Netflix has pledged to add an additional viewer warnings before the first episode and to strengthen the language in the existing cards, which run before episodes that graphically depict rape and the suicide (the primary igniter of the controversy). Netflix also has included a companion episode called "Beyond the Reasons," in which the cast, producers and mental health professionals discuss the topics explored in the series and points viewers toward a webpage with crisis information resources.

About that suicide, though; it is horrifyingly graphic. Langford’s Hannah fills a bathtub, gets inside, takes a razor and slides it into the flesh on one wrist, then the other. The water reddens with her blood, and her eyes widen with shock as death takes hold. The scene is about as far from romantic as it gets, and that is precisely as series writer Nic Sheff intended. Sheff survived a suicide attempt, as he recounted in a recent Vanity Fair essay, and argued with producers that they had an obligation to show the ugliness of it.

The part of “13 Reasons Why” that doesn’t get discussed much are the adults featured in the series; some of them simply cannot be bothered to ask their kids about what they’re going through. Parents of school bullies are dictatorial, mean-spirited or absent. They have no idea that their kids are getting drunk, doing drugs or torturing their peers. Others are loving but set high standards by example that their kids are pressured to match. Hannah’s school guidance counselor was her final hope and tries to comfort her, but ultimately fails her.

In the series, even Hannah’s well-meaning, affectionate parents don’t see the signs that she was shrinking in front of them because they are too busy trying to keep their household afloat while the family lifeboat is springing financial leaks, which is perfectly understandable. They are doing their best. They still lose their child.

And this is one of many subplots offering an entry for adults to talk to the kids in their lives about the issues this show raises.

Among the many truths about modern television that this controversy illuminates is how easily we silo ourselves into our cultural choices, and how dangerous that can be if we choose close our eyes and ears to topics we’d rather not think about.

Banning “13 Reasons Why” will do nothing. Neither will Netflix’s issuance of a TV-MA rating truly hinder children as young at 10, 11 or 12 from watching the series because when has any ratings system ever stopped kids from seeing what they want to see? If a child has a phone, a tablet or even a friend with permissive parents, they have access this show.

Again, I am not a parent, but hear me out: What if “13 Reasons Why” is one of those increasingly rare cultural phenomena that parents and their children agree either to watch together (which, admittedly, would be massively uncomfortable) or separately and then discuss?

What if it’s a pop trend that could foster a greater understanding of how tough it is to navigate the social war zone of today’s high schools? For while it’s true that we were all teenagers, the “Heathers” generation didn’t live in a world where reputations can ruined in the space it takes to snap a photo and share it on Instagram. Bullying can be vicious and unrelenting and take place right under the noses of adults without their having any knowledge of what’s happening.

Hannah’s version of her tale is one-sided, and the argument that the series doesn’t depict other unspoken factors that play into her awful final decision has merit — if the series’ intent is to show a portrait of mental illness and depression in its fullness as opposed to the curated and controlled slices that Hannah allows us to see.

There’s plenty going on in the world around Hannah that merits closer consideration of “13 Reasons Why.” The unblinking portrayal of her death scene may be seen as realistic or borderline exploitative. One might even think it's vulgar. And it’s worth discussing why that scene and all the moments leading up to it have stirred up such an array of passions because the vulgarity of that image is only one part of the story.