All of the president's strongmen: Trump has praised Kim Jong Un more than Elizabeth Warren 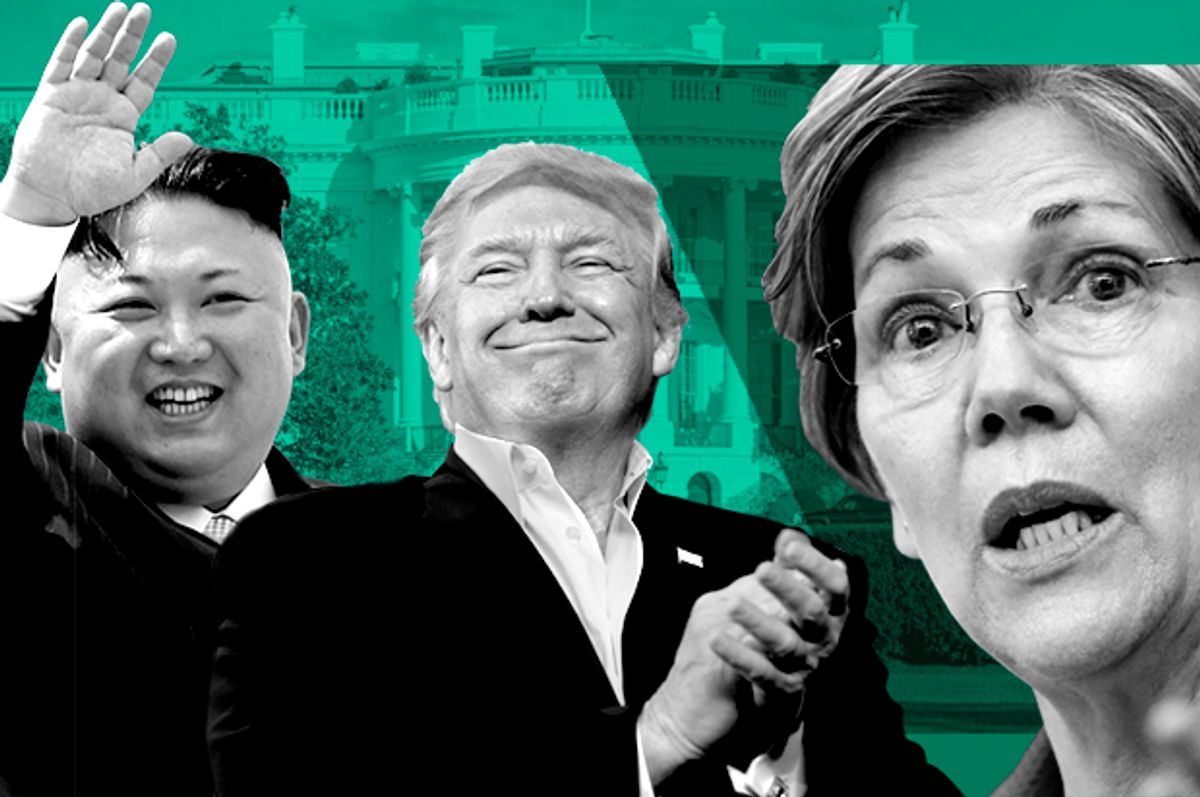 While the United States has certainly cozied up to violent, authoritarian leaders in the past, every modern American president has used his office to at least occasionally champion human rights and democratic values around the world. But President Donald Trump appears to openly delight in authoritarian strongmen, willingly turning a blind eye to the records of brutality and oppression of several dictators in order to offer the foreign leaders more praise than he's uttered to even women lawmakers in his own country.

Trump's biggest domestic detractors have been able to rest a bit easier during his first 100 days, reassured that despite the president's criticism of certain aspects of the American democratic system, including calling our system of checks and balances “a bad thing for the country,” he has twice been blocked from implementing radical policies like his Muslim ban. The impact of Trump's wild rhetoric, however, has had a profound effect abroad: His anti-democratic talk and anti-press rants have a large impact in nations where he has praised dictators. Even as Trump has attacked the judges who dared to block his ban, and his chief of staff has claimed the White House is researching ways to change the First Amendment to the Constitution, the president of the United States has appeared unwilling to condemn even the worst behavior of the world's most notorious strongmen.

Ostensibly, the White House has explained Trump's peculiar admiration for brutal dictators as a tactic in a broader strategy to fight the rise of external threats to the U.S., like radical terror group ISIS and a nuclear-powered North Korea.

"The United States has a limited ability to direct things," Michael Anton, the National Security Council's director of strategic communications, recently told The Washington Post. "We can't force these countries to behave certain ways. We can apply pressure, but if the alternative is not talking, how effective would it be if we had no relationships? If you walk away from relationships, you can't make any progress."

But recall that Trump — who's built his wealth at least in part as a real estate developer — had considerable dealings with organized crime figures in New York’s construction industry, and suddenly his praise for strongmen seems less about prioritizing the security and material interests of the U.S. and much more personal.

"It's very disturbing," Sen. John McCain of Arizona said of Trump's bizarre series of comments praising various dictators around the world. On MSNBC's "Morning Joe" on Tuesday, McCain, a Republican, pointed out that Trump's "statements and the comments obviously fly in the face of everything I stood for and I've believed in all my life."

Trump told Bloomberg in an interview on Monday that he would meet with North Korean leader Kim Jong Un for direct negotiations about the North Korean nuclear weapons program, contradicting statements made by his chief of staff the day before.

"If it would be appropriate for me to meet with him, I would absolutely, I would be honored to do it," Trump said. "If it's under the, again, under the right circumstances. But I would do that."

About Kim, Trump said on Sunday on CBS News' Face the Nation," "At a very young age, he was able to assume power," He added, "A lot of people, I'm sure, tried to take that power away, whether it was his uncle or anybody else. And he was able to do it. So obviously, he's a pretty smart cookie."

While Trump depicted an ominous scene of “American carnage” during his inauguration, President Rodrigo Duterte of the Philippines — who has been called “the Trump of the East” —  has overseen a literal bloodbath in the streets of his nation with a slew of extrajudicial killings.

As photos taken by The New York Times’ Daniel Berehulak depict, Duterte's crackdown on drugs in the Philippines has led to the deaths of more than 7,000 people since July, many lying shot dead in the street. As mayor, Duterte was also alleged to have assembled and directed death squads that targeted more than 1,4000 drug dealers and users.

This week the vile leader who appointed the Filipino developer of Trump Tower in Manila to be his special trade envoy to the United States, received an invitation to the White House from Trump.

Trump said of Duterte on Monday, "He has a very high approval rating in the Philippines.”

White House Chief of Staff Reince Priebus, when asked about the invitation on Sunday, said Trump's “very friendly conversation” with Duterte was part of an effort to form an international coalition against North Korea's Kim Jong Un.

Trump invited the authoritarian leader of Egypt, who once oversaw the killing of more than 800 protesters in a single day, to the White House last month. President Abdel-Fattah el-Sissi, who has jailed thousands of dissidents, came to the White House as part of Trump's effort to solidify an alliance against Islamic extremism.

"The reason that the president is building an effective coalition and is getting results around the globe in reasserting America’s place is because he understands the type of diplomacy and the type of negotiating and the type of deal-making that actually gets real results for our country," White House press secretary Sean Spicer said Monday.

“We will do that together,” Trump said about el-Sisi after the meeting. “We will fight terrorism and other things, and we’re going to be friends for a long, long period of time.” Trump praised the Egyptian strongman, saying they agreed "on so many things" and that el-Sisi had done a "fantastic job in a very difficult situation."

In 2014 when el-Sisi won power in a controversial election, Trump's predecessor, former President Barack Obama, also congratulated him. But, according to a White House description of that call, Obama also used the occasion to impress upon el-Sisi the U.S.' “support for the political, economic, and social aspirations of the Egyptian people, and respect for their universal rights.”

Indeed, as The Washington Post recently pointed out, "in his first 102 days in office, Trump has neither delivered substantive remarks nor taken action supporting democracy movements or condemning human rights abuses, other than the missile strike he authorized on Syria after President Bashar Assad allegedly used chemical weapons against his own citizens."

Obama had refused to extend a White House invitation to the Egyptian dictator.

Just hours after Trump's State Department criticized reports of “irregularities on voting day and an uneven playing field during the difficult campaign period” in Turkey last month and called on the regime there “to protect the fundamental rights and freedoms of all its citizens," the U.S. president praised Turkish President Recep Tayyip Erdogan on his success, which basically has eroded Turkish democracy.

Trump called Erdogan to congratulate him on seizing control of the governing apparatus through last month's Turkish referendum vote that passed by a bare majority and was marred by violence and restrictions on the press.

Trump plans to host Erdogan at the White House later this month.

Trump has twice defended the Russian leader against accusations that he murders journalists and dissidents, even telling former Fox News host Bill O'Reilly in February that in the U.S., "We kill people, too."

The U.S. president commented on Vladimir Putin's remarks about him, it is a "great honor to be so nicely complimented by a man so highly respected within his own country and beyond."

As president, Trump has continued to refer to Warren, a forceful Democratic critic of his in Congress, as Pocahontas, making an apparent dig at her claim to be Native American. He again did so last Friday at the National Rifle Association convention.