Alt-right hopes to organize street-fighting goon squad: Is it more than macho posturing? 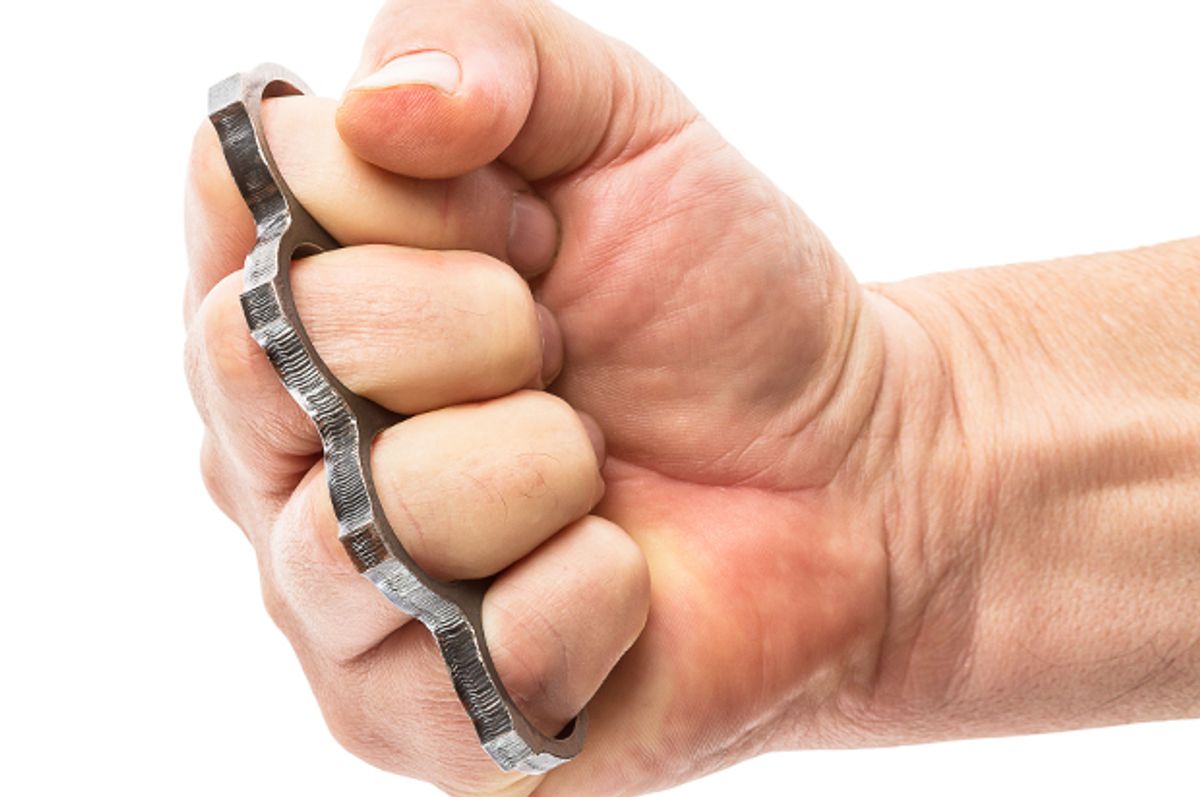 Kyle Chapman, known to his fans on the alt-right as "Based Stickman" for beating a leftist protester with a wooden stick at an early March pro-Trump protest in Berkeley, California, wants people to think he's tough. In late April Chapman announced on Facebook  his creation of a new group of right-wing street fighters, called the Fraternal Order of Alt-Knights (or FOAK), dedicated to "defense and confrontation" in the streets. You could almost hear the chest-thumping right through the computer screen.

"This organization is for those that possess the Warrior Spirit," Chapman wrote. "The weak or timid need not apply."

A few days after that, the Proud Boys network, a group that Vice co-founder and former Fox News contributor Gavin McInnes calls a “pro-West fraternal organization," posted a notice about the formation of the alt-knights' order and a call for "strong minded men" who are "comfortable in fisticuffs" to join. I reached out to Chapman in hopes of seeing his "warrior spirit" for myself. Alas, I ended up disappointed.

Initially, Chapman seemed interested in talking and gave me his phone number. But when I called him, he refused to speak to me, insisting that I email my questions instead. Since then nearly a week has gone by, and Chapman has not answered my emailed questions or any of my follow-up nudges on Facebook. (He has read them, though.) The "warrior spirit" is apparently not enough to help him tough out a conversation with a journalist about why he believes the world needs the Fraternal Order of the Alt-Knights.

The public claim is that this organization is needed for self-defense.

"The Proud Boys are already known to escort woman and targeted speakers to events for protection against violent anti-speech protesters," a blogger named PawL BaZile wrote on the Proud Boys website. "FOAK will now take the next logical step in organizing the Proud Boy watchdogs into a force to protect and serve when the police are told to stand down."

Investigative journalist and Southern Poverty Law Center contributor David Neiwert, who has won a National Press Club award for his investigations of hate groups, is skeptical about these claims.

“These guys are there looking for a fight," Neiwert said in a phone conversation. “These guys are clearly quasi-fascist, classic protofascists, and they’re on the track to full-fledged fascism. All we need to do is look at history and see how it happened."

Neiwert said he consults historian Robert Paxton's theory, published in 1998 in the Journal of Modern History, that delineates the five stages of fascism. Right now, Neiwert argued, far-right elements are seeking to consolidate power and that requires recruiting mainstream conservatives to their side. By going out into the street and picking fights with leftists, under the guise of free speech and self-defense, groups like the Proud Boys and the Fraternal Order of Alt-Knights can play the martyr and give ordinary conservatives an excuse to rally around them.

My Salon colleague Matthew Sheffield offered a similar analysis last week in a Salon article, arguing that those on the alt-right are now angling for more mainstream support, and the quickest way to do that is by portraying themselves as frontline defense against a supposedly violent leftist uprising. As evidence, Sheffield pointed out that propaganda portraying these far-right racist and neo-Nazi groups as free-speech martyrs has "quickly migrated to more mainstream conservative sites that also cater to alt-right audiences."

The claim of Chapman and his fellows to be gentle lambs merely provoked by violent leftists is hard to swallow on its surface, because they just so happen to hold their rallies in places they know have a large presence of antifa activists. "Antifa" is the label adopted by advocates for a subculture promoting "a set of tactics and practices that have developed since the early 20th century (and the rise of fascism in Italy) as a confrontational response to fascist groups, rooted in militant left-wing and anarchist politics," according to Natasha Lennard of The Nation.

But that's not the only reason it's hard to buy the claim that Chapman's hard-right acolytes are going into this fight reluctantly.

"We don’t fear the fight. We are the fight," BaZile crowed in his post announcing the formation of the  Fraternal Order of the Alt-Knights..

Especially illuminating was the response that Chapman received when he put out a call on Facebook, under his own profile and the Based Stickman fan page, for "a symbol/crest to represent the Fraternal Order of Alt-Knights." The self-seriousness of those who  responded was matched only by the near-pornographic enthusiasm for violence.

Here's a sampling of some of the popular submissions: The above graphic is apparently a reference to former Chilean dictator's purported habit of disappearing leftists by throwing them out of helicopters. Soon there will be a court test for the theory that these far-right forces are deliberately starting fights so they can play the victim afterward.

Last week prosecutors in Seattle filed charges against the married couple Elizabeth and Marc Hokoana in connection with the shooting of a man who attended an Inauguration Day protest of a speech by right-wing provocateur Milo Yiannopoulos at the University of Washington.

The Hokoanas have tried to depict the shooting as an act of self-defense, but a prosecutor argued that the couple "created a situation designed to allow Elizabeth Hokoana to shoot the victim in the middle of an extremely crowded event under the guise of defending herself or her husband.”

Prosecutors have gathered evidence of premeditation, including Marc Hokoana's statement that he wanted to "crack skulls" and coaching his wife, who was carrying the gun, by saying, "They have to start this. They have to start it," during the fight.

Neiwert, who was at the event and captured video of the events preceding the shooting, told me on the phone that the victim, Joshua Dukes, had been trying to break up fights. The Seattle prosecutors agree, arguing that Dukes was shot when he confronted Marc Hokoana for pepper-spraying the crowd.

But Neiwert doesn't want to let leftist protesters off the hook entirely, however.

“For the most part, the antifa people are peaceful," Neiwert said, but he also reported having seen antifa protesters throwing rocks and punches. He was banged around a few times at the Seattle protests by antifa radicals trying to knock the camera out of his hands.

“Right now the left is being outsmarted by these guys," Neiwert said. Antifa protesters are "playing into the hands" of the protofascists by giving them the fight they want, he argued.

But you can't do it, Neiwert said, "by fighting them physically," adding, "All you do is prove their point or seemingly prove their point. Certainly you give the media the opportunity to say, ‘See, both sides are equally bad.’”

Instead, Neiwert argued that the left should confront protofascists with mockery. He sent me a post he wrote in February for his personal blog recounting what transpired at a 2005 neo-Nazi rally in Olympia, Washington, when progressive protesters showed up in clown costumes and performed dances to mock goose-stepping. This whimsical display reduced the neo-Nazis to sputtering but impotent rage, he wrote.

In 1993, Molly Ivins reported on a similar counterdemonstration in Austin, Texas, where 5,000 anti-racist protesters met a Ku Klux Klan rally and moonedg Klansmen.

"Citizens dropped trou both singly and in groups, occasionally producing a splendid wave effect," Ivins said. "It was a swell do."

Considering the utter self-seriousness of the protofascists, this could well be an effective response. It's certainly better than giving them a fight, which allows the far-right forces to portray themselves as martyrs and victims and might even aid them in rallying more mainstream conservatives to their side.

Meet their macho bravado with clown noses and fart noises. It's tough to play brave soldiers facing down violent leftists in the face of that.