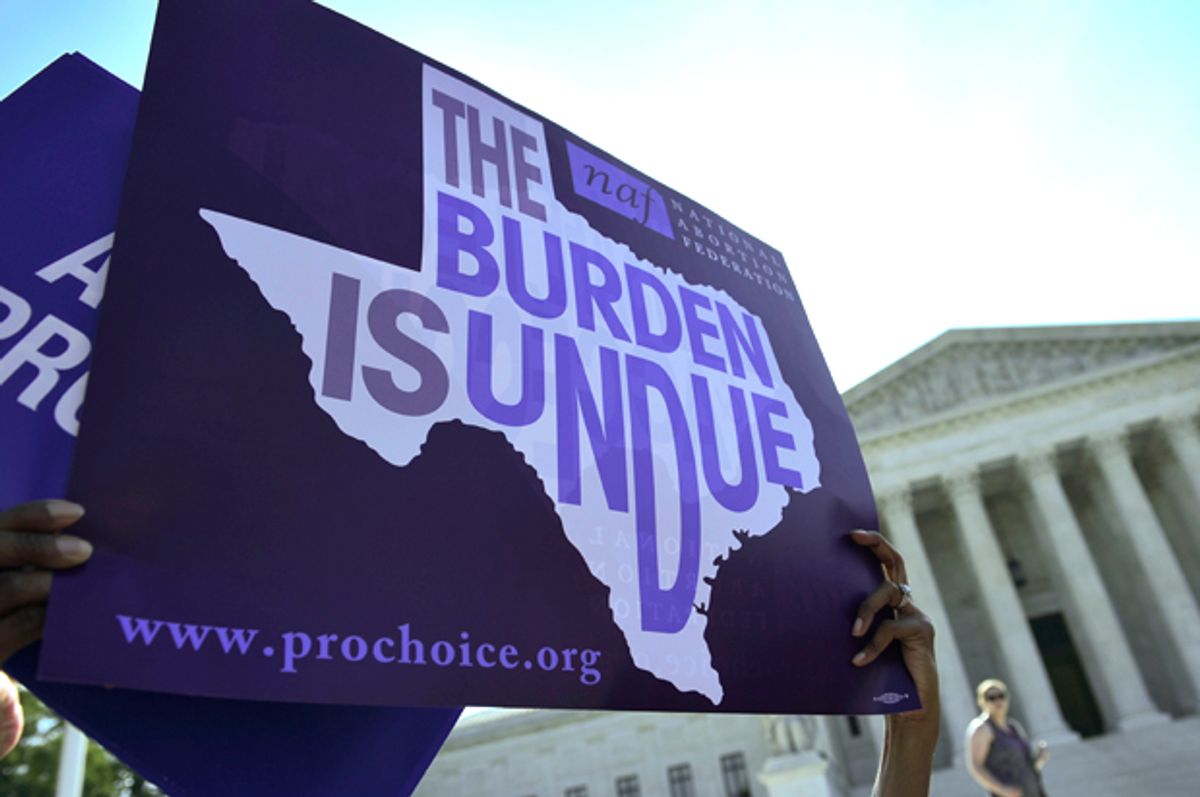 Last June the U.S. Supreme Court overturned most of a draconian abortion law in Texas that shut down more than half the abortion clinics in the state, reducing the number from 40 to 19. But while the law, known as House Bill 2, that forced clinics to follow costly but medically unnecessary regulations has been wiped off the books by the Whole Woman's Health v. Hellerstedt decision, things are still looking dire for women who seek abortion services in Texas.

Whole Woman's Health, the clinic behind the federal lawsuit, was only able to reopen its Austin branch last week. It's just the second clinic to reopen its doors since the high court's decision, meaning the number of abortion clinics in Texas is about half of the count before the 2013 law went into effect. It costs a lot of money and time to reopen a clinic, and it will be years before legal abortion access in Texas is restored to its old levels, if it ever is.

A new paper published in the National Bureau of Economic Research titled "How Far Is Too Far? New Evidence on Abortion Clinic Closures, Access, and Abortions" looks at how the clinic closures, which left huge areas of a huge state without any nearby abortion facilities, have affected women's ability to receive an abortion. Researchers looked at abortion rates by county in Texas after the closures and discovered a dramatic effect on the abortion rates in many places.

“I wasn’t surprised that such a dramatic reduction in access had some effect on abortions," Caitlin Knowles Myers, an economics professor at Middlebury College, said in a phone conversation. Myers is one of the paper's four authors. "We’re talking about costs, after all, that can really make a difference to women with limited financial and time resources.

"But I was surprised by the magnitude of our findings," she added. "Based on our estimated models, if access to abortion clinics had remained at pre-HB2 levels, Texas women would have had 121,514 legal abortions in 2014-2015 rather than the 107,830 observed in the abortion surveillance data," according to the paper.

The question is what happened to all those "missing" abortions. Myers said her team has no clear way of answering that.

One strong possibility is that women are still aborting but not legally at licensed clinics. A drug called misoprostol, which is easily obtained by mail order or over the counter in Mexico, is a relatively safe abortion method that women are learning about by word-of-mouth and through the internet. There's no exact way to measure the rate by which women are using misoprostol to induce their own abortions, but significant anecdotal evidence suggests the use of the drug is widespread.

“It’s no longer the age of the coat hanger, thank goodness," Myers said. "But based on those anecdotes, it seems plausible that some of those substantial reductions that we see in legally induced abortions might be accounted for by women self-inducing abortions."

But, she hastened to add, since the very nature of self-induced abortions makes them hard to quantify, there's no way to know the impact for certain.

Another possibility, to be sure, is that women are having babies instead of abortions. The research team wanted to look at birth data in those counties that saw a reduction in the abortion rate, to see if there was a corresponding spike in the birth rate. Unfortunately, the team was unable to obtain that data from the state or national government in time to publish the paper.

The possibility that women who wanted abortions are being forced to have babies instead is even more troubling than the possibility that they're getting gray market abortions. An ongoing study, run by Advancing New Standards in Reproductive Health at the University of California, San Francisco, has found that women who want abortions but are unable to receive them have higher rates of hypertension and chronic pelvic pain and are three times as likely to end up living below the federal poverty level than women who obtain abortions. Women who want abortions but don't secure them are also more likely to become stuck in abusive relationships.

Myers noted that it's possible that women in the counties with lower abortion rates took fewer risks with unprotected sex and therefore had fewer unwanted pregnancies than the women who had better access to clinics. But I would argue this is unlikely: Other studies have found that Republican attacks on contraception access in Texas caused use of birth control to decline statewide and the number of Medicaid-funded deliveries to rise. Worldwide, the evidence suggests that loss of access to legal abortion does little to decrease the demand for abortion.

All of this looks, from a pro-choice perspective, like an argument against abortion restrictions. But, as Myers pointed out, both opponents and supporters of legal abortion "could see this finding as vindication." In the past anti-abortion websites have crowed triumphantly about the negative impact that clinic closures have on the legal abortion rate, although claiming this as a victory means ignoring evidence that women are turning to self-induced abortions.

But while anti-choice activists see these medically unnecessary abortion restrictions as a way to stop women from getting legal abortions, the states that pass the laws must pretend that clinic closures have no meaningful effect on women's access. A 1992 Supreme Court decision found that abortion restrictions cannot present an "undue burden" on access, a standard the court upheld in the 2016 decision. Because of this, in one of the kookier side effects of abortion litigation, lawyers who defend onerous abortion regulations have to portray laws that are clearly intended to restrict access as having no real impact on such access.

That's why, even though the Texas law was overturned, this type of research still matters. "In the past decade abortion opponents have increasingly turned their attention to supply-side regulations targeting abortion providers," Myers said. "This still seems to be the case, even in the wake of the Whole Woman’s Health decision."

State legislators across the country have proposed at least 431 state-level abortion restrictions since the start of this year, seemingly undeterred by the smackdown from the Supreme Court in June. Being able to prove in court that efforts to restrict access to abortion actually do that is clearly still necessary.

Even if that weren't so, the fight clearly isn't over. Clinics are still closed and many women in Texas continue to lack access to legal abortion. Undoing the damage done by anti-choice legislators will take more than one headline-grabbing court victory.