Donald Trump's historical ignorance reveals a great truth: The party of Lincoln has become the party of Jefferson Davis 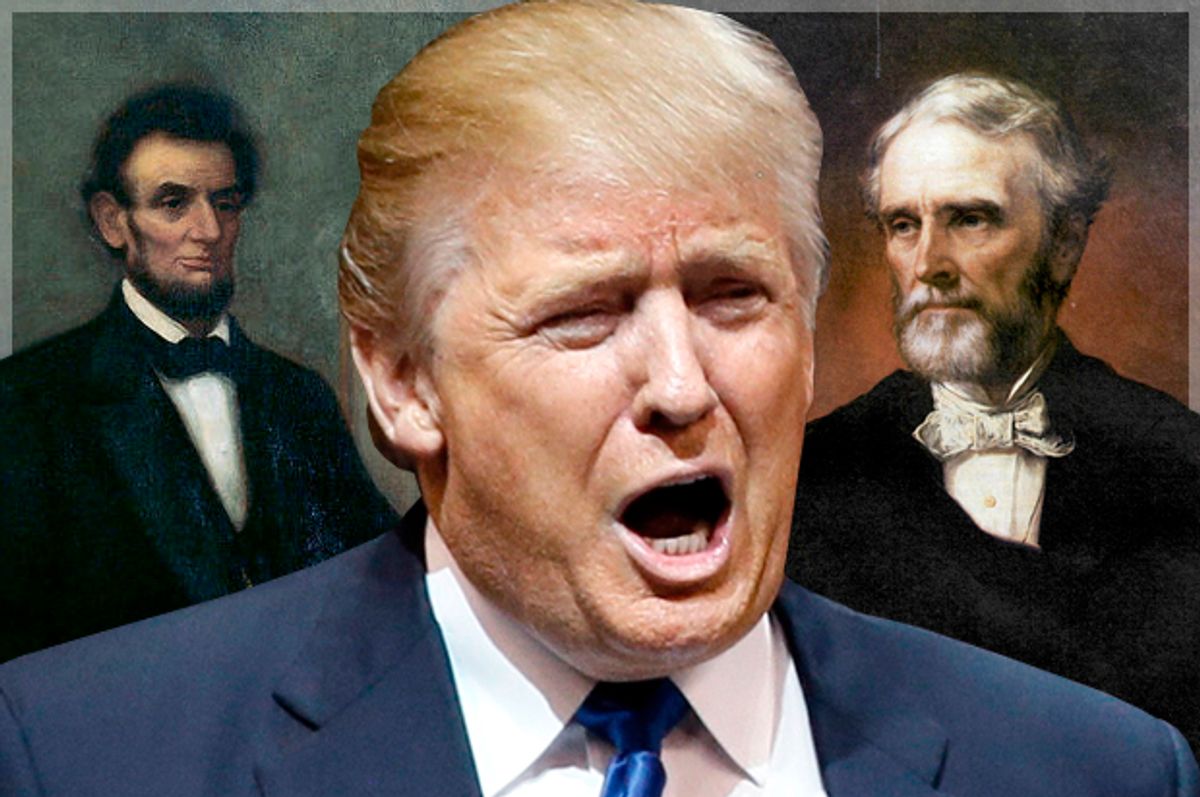 Donald Trump is proudly ignorant. He does not read. Trump reminds the world of this almost every day. During an interview with the Washington Examiner's Salena Zito on Sunday, Trump made a now-infamous observation:

I mean, had Andrew Jackson been a little later, you wouldn't have had the Civil War. He was a very tough person, but he had a big heart. And he was really angry that — he saw what was happening with regard to the Civil War. He said, “There's no reason for this.” People don't realize, you know, the Civil War — if you think about it, why? People don't ask that question, but why was there the Civil War? Why could that one not have been worked out?

As leading historians have pointed out, Donald Trump's understanding of the causes of the American Civil War is pathetic. To wit, Trump's errors are many.

Andrew Jackson died in 1845, 16 years before that national conflagration. He would not have been able to stop it.

As Abraham Lincoln pointed out in 1858, slavery represented an existential crisis for American society and would demand a type of second founding to correct it.

Andrew Jackson owned at least 150 black people as human property. He was quite literally the last American president to be a "slave driver." Historians Ned and Constance Sublette detail this in their magisterial book "The American Slave Coast":

Failing to sell the slaves himself, Jackson drove the unsold slaves back to Nashville, taking the unheard-of step of driving a coffle [or a chained train] of slaves from the destination back to the point of origin, through Choctaw and Chickasaw territory. . . . Given the documentation of this episode that exists, it appears safe to say that Andrew Jackson is the only U.S. president that we know of who personally drove a slave coffle. But then, Jackson was also the first president to have been a merchant.

Given that slaves were the No. 1 capital good in the United States — collectively worth more than all the banks, factories and railroads combined — Jackson would likely have done everything he could to protect his wealth.

If Jackson had magically been able to prevent the outbreak of civil war, it likely would have meant black people remaining in America's slave labor camps where they were worked to death, raped, tortured and murdered by the white people who owned their flesh.

Jackson was also not a "swashbuckler," as Trump described him. Jackson ordered horrific violence against black and First Nations people in Florida and also conducted a campaign of mass murder and "ethnic cleansing" in the American West against people of color in order to free up land for slavery.

Ultimately, Donald Trump is a reality-TV show character and con artist turned president of the United States. He is neither smart enough nor possessed of the intellectual curiosity necessary to seriously evaluate counterfactuals in American history. It is extremely unlikely, bordering on the impossible, that there are copies of books by Eric Foner, David Blight, David McCullough, Steven Hahn, Edmund Morgan, Daniel Howe, John Hope Franklin, David Williams, Thomas Holt or even the speculative historical fiction writer Harry Turtledove on Trump's bookshelf or near his bedside.

The more important concern is what do Trump's statements about Andrew Jackson, the Civil War and American history more generally signal about his political worldview? Where do these beliefs come from? Who is influencing Donald Trump?

Donald Trump's inner circle consists of white supremacists, neo-Nazi sympathizers, and white "ethno-nationalists" such as Steve Bannon, Sebastian Gorka, Stephen Miller, Attorney General Jeff Sessions and Michael Anton. Collectively they embrace a racist ideology that considers "white civilization" to be under siege by nonwhites and Muslims. Trump's cadre believes that white people in America (and Europe) are "oppressed" and "threatened." To "free" white people means that they — especially white Christian heterosexual men — must be elevated above all others.

Andrew Jackson, who expanded voting to all white men in order to expand the ties of whiteness and reinforce the white Herrenvolk republic, is a perfect symbol for today's right-wing white-identity politics. Consequently, it is no coincidence that the conservative media (and unfortunately too many voices among the so-called liberal media as well) consistently refers to Trump as a "populist" Andrew Jackson-like figure.

Trump's belief that the Civil War could have been "worked out" reflects the influence of the white supremacist neo-Confederate movement on the Republican Party. Neo-Confederates believe the Civil War was "forced" on the South and that "states' rights" deemed that whites could and should own black people as slaves. Despite overwhelming evidence that the Confederacy seceded precisely to protect slavery as a social, economic and political institution, neo-Confederates circulate the lie that slavery was not central to the War Between the States. Unfortunately, through extremist groups such as the Tea Party as well as educational initiatives funded by the Koch brothers, such historical fictions are being written into the textbooks used by America's public and private schools.

There is also a high degree of overlap between neo-Confederates, neo-Nazis and other white hate groups such as the Ku Klux Klan. Thus, it is no coincidence that President Trump and his administration have engaged in Holocaust denialism, whereby they have attempted to minimize the evils of Hitler and the violence suffered by the Jewish people. Moreover, as a function of the explicit racism and nativism that Trump used to win Republican voters, and subsequently the White House, it is no surprise that he has been endorsed by white terrorist organizations such as the Ku Klux Klan.

In sum, Trump's embrace of Andrew Jackson is indicative of the way the ignominious cause of the Confederacy shambles on in the form of the modern Republican Party. In response to the victories of the decades-long black freedom struggle, during the 1960s the Republicans fully embraced white racism in the form of Pat Buchanan's "Southern strategy." The Republican Party then absorbed the racist faction of Southern Democrats or "Dixiecrats," and reinvented itself as a political organization whose power base was in the South, Southwest and white suburbs and exurbs in other parts of the country.

President Lyndon B. Johnson observed, after his signing of the 1964 Civil Rights Act, that the Democrats had "lost the South for a generation." That moment birthed a post-1960s Republican Party that defends the Confederate battle flag, hopes to return to Jim Crow-like voter suppression laws, and that elected a racist reactionary authoritarian as president of the United States.

The neo-Confederate character of American politics under the Republican Party is also reflected in how many of the most damaging and destructive economic policies that have gutted the social safety net and devastated the poor, working and middle classes (to the advantage of the rich) were first applied in the South before being afflicted on the rest of the United States. Moreover, the Republican Party's efforts to control women's bodies and its embrace as a defining policy theme a toxic white masculinity — obsessed with guns as key to manhood, welcoming misogyny and reluctant or refusing to protect women from domestic and sexual violence — also echo the old Confederacy in the present.

Trump has helped to transform the party of Abraham Lincoln into the party of Jefferson Davis. His administration treats Latino undocumented immigrants as if they were black folks being hunted down under the Fugitive Slave Law. America's police can trace their origins directly to the slave patrollers of the Southern slaveocracy. Trump's enforcer Jeff Sessions has promised to further unleash the police against black and brown Americans in the name of "law and order." The slave labor camp often used a black person — known as a "driver" — to maintain order and control over his fellow enslaved people. Trump does this, as have previous Republican presidents, by enlisting black conservatives to demean the African-American community and make excuses for racism.