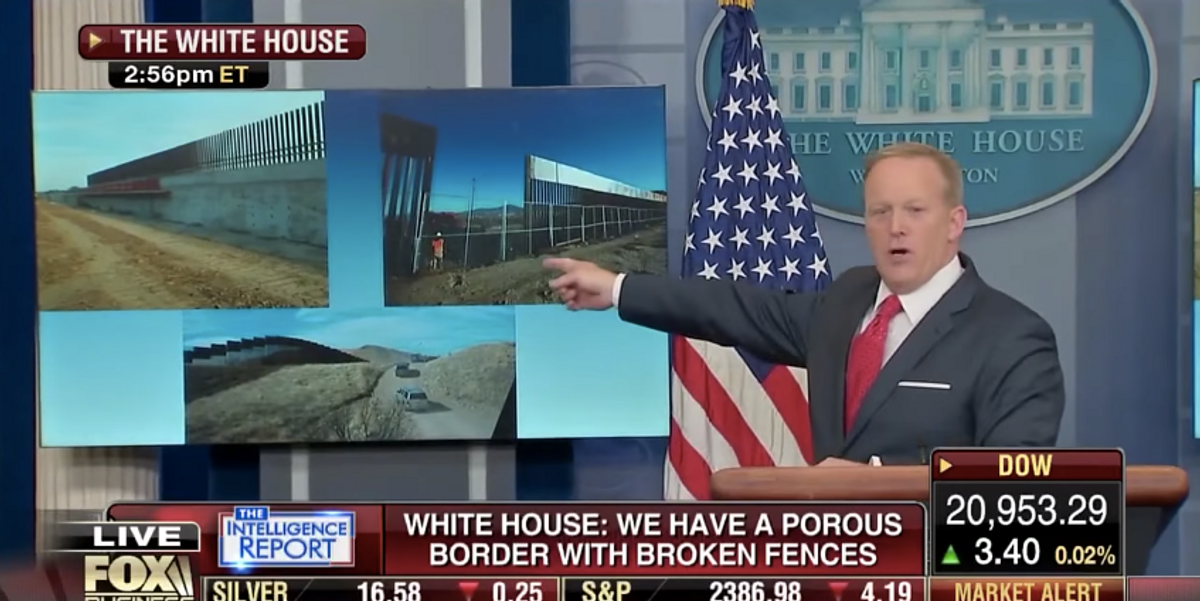 Since President Trump won the election, there has been a debate about whether or not his campaign pledge was a plan to build a physical wall or if it's actually just a series of increased border security. Losing his cool with a Breitbart reporter on Wednesday, White House Press Secretary Sean Spicer seemed determined to make it very clear: it's a wall — of sorts.

One day after walking out of the Brady briefing room before taking reporter questions, Spicer was pressed by Breitbart reporter Charlie Spiering about why the Trump administration is trying sell improvements on existing security measure as the border wall that Trump promised during his campaign. With a smile almost as long as the border, Spicer thanked Spiering for the question and took the opportunity to show off a prepared slideshow of images from the U.S.-Mexico border.

Spicer insisted that the recently negotiated budget billl will allow for an additional $497 million for "procurement, structure, and improvements." He also noted that $300 million of that funding will be to used to replace 40 miles of existing "border fencing."

"So every time that [undocumented immigrants] cut through, break through, it’s costing just under a thousand bucks for us to go out and have to fix," he explained.

But the reporter from Breitbart was not satisfied with those answers. "Just one question about the photos," Spiering said. "Are those photos of fences or walls?"

"That is called a bollard wall, that is called a levy wall," Spicer replied. "There are various walls that can be built under the legislation that was just passed. It allows us to do that."

“What is that?” Spiering asked, interrupting the press secretary.

“That is a fence,” Spiering insisted, however.

CNN Correspondent Jim Acosta then jumped into the action saying, "It’s not the wall the president promised."

Spiering continued to press Spicer: "You’re basically just telling supporters, the President’s supporters, to be satisfied with this existing tough-guy fencing until he’s ready to build the wall."

“No, what I’m telling anybody is that the President said he was going to build the wall and he’s doing it." Spicer replied with a tone of clear frustration.

According to the pictures, however, it sort of does looks like a wall -- but it also looks like a fence. We may never really know.

Watch the dispute below, via RawStory: