Are you smarter than the president? Take this quiz and find out!

Trump got an F 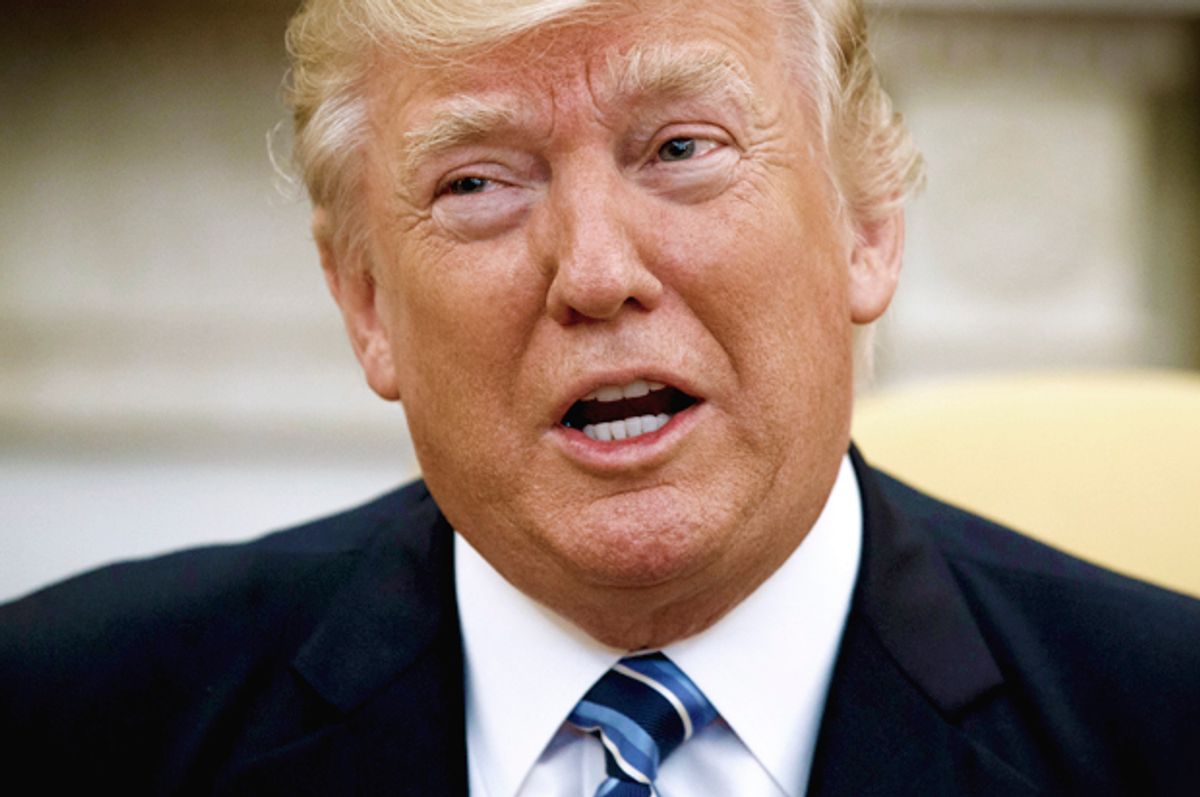 You might think you have to know a few things about history, language and culture to be U.S. president, but as it turns out, you’re just behind the times. Yes, that was the boring old rule. But a few months ago, 63 million people voted to get rid of all that stuff because who wants a functioning society? That’s how we got a new president who hates books, politics, women, a free press, paying taxes, reading the executive orders he signs, immigrants, science, anti-nepotism laws, being president, and even fleeting moments of honesty.

Now that everything’s changed, and we have a commander-in-chief who reveals his stunning ignorance on topics from health care to North Korea on a weekly basis, you have to wonder: are you smarter than the president? Here’s a short test to help you answer the question.

Q: What political party did President Abraham Lincoln belong to?

A: The Republican Party. Lincoln, the 16th president who led the country during the Civil War and issued the proclamation that ended slavery, was the first member of the GOP to ascend to the presidency. This is given away by the fact that members refer to it as "the party of Lincoln,” especially when something super racist happens. Trump, ostensibly the country’s top Republican, was astonished to find out that Lincoln was a Republican, and shared his wonderment with an audience at the National Republican Congressional Committee.

“Great president. Most people don't even know he was a Republican,” Trump said. "Right? Does anyone know? A lot of people don't know that. We have to build that up a little bit more.”

Except no, we don’t. According to polls, most Americans actually do know Lincoln was a Republican.

If you got the answer right, give yourself a billion points.

Q. What issue was at the heart of the Civil War?

A. Slavery. This isn’t up for debate. The seceding Confederate states issued declarations explicitly stating their intent to keep buying and selling human beings to do their work for free to enrich their economies. Trump asks—either because he is engaging in racist historical revisionism or because he simply doesn’t know fourth-grade history—“Why was there the Civil War? Why could that one not have been worked out?"

The answer is that the protection of slavery as a cherished cultural institution, assurance of white supremacy and $3.5 billion asset couldn't be fixed with a chat. James Roark, a retired history professor at Emory University, told the Associated Press, "As it got tangled with American politics and regional interests, nobody could figure out a way to save both the Union and preserve slavery in the South. It wasn't for a lack of talking. There was plenty of talking."

I mean, try having a conversation in 2017 with someone who defends the rebel flag and Confederate monuments—anti-American symbols of Southern treason and the most hyped consolation prizes in history—and see where it gets you.

Did you answer correctly? Give yourself two points. Also, take your children to work with you, set them up with desks and tell your co-workers there’s a new chain of command.

Q. What is a metaphor?

A: In its simplest form, metaphors are rhetorical devices that use figures of speech to convey parallels between two ideas. They shouldn’t be taken literally. No one actually goes to a river with a rod to fish for compliments. That performance art piece where you coat your body in guano and pages from Parade Magazine is a metaphor for the plight of the wildebeest, but only because you say so.

Here’s a snapshot of Trump not recognizing a metaphor during a recent “Face the Nation” interview:

John Dickerson: George W. Bush said the reason the Oval Office is round is there are no corners you can hide in.

Dickerson: — back to you.

Did you spot the metaphor? Give yourself 324 points and stage a photo of yourself unconvincingly writing a speech using a Sharpie.

Q. Would you say Frederick Douglass is doing a good job of raising his profile and getting noticed? Why or why not?

A: No. Because he has been dead since 1895. Frederick Douglass was a slave-turned-prominent abolitionist, a suffragette and an iconic figure in American history. He is not, as Donald Trump stated, “an example of somebody who has done an amazing job that is being recognized more and more.” He is not on Twitter raising his profile and getting crazy retweets and he is not someone who “has done” neat-o black people stuff recently.

Nailed it? Add 9,000 points to your total and try to muster sympathy for all the Trump voters who are guaranteed to be screwed over by the president. Now take that sympathy and direct it toward the vulnerable, targeted people who actually deserve it — the ones subject to hate crimes, the people who’ll lose the most under this regime, the folks whose rights are being further whittled away.

Q: Is being president of the United States hard? Yes or no?

A. This is a trick question. Usually the answer is yes. Have you seen how much people age between entering the White House and leaving it? Trump, though, has invented a new kind of presidenting where he’s in his bathrobe and slippers by 6:30pm and on vacation roughly a third of the time. He’s probably aging backwards, reverse-Benjamin Button style.

He said recently he thought the job would be easier. Imagine how he’d be feeling if he were actually doing the job.

Either way you went, you got this one right. Subtract all the points you’ve earned, plus another 500 points more because this isn’t a game and this guy is going to do some serious damage over the next four years.

Thank you for playing!