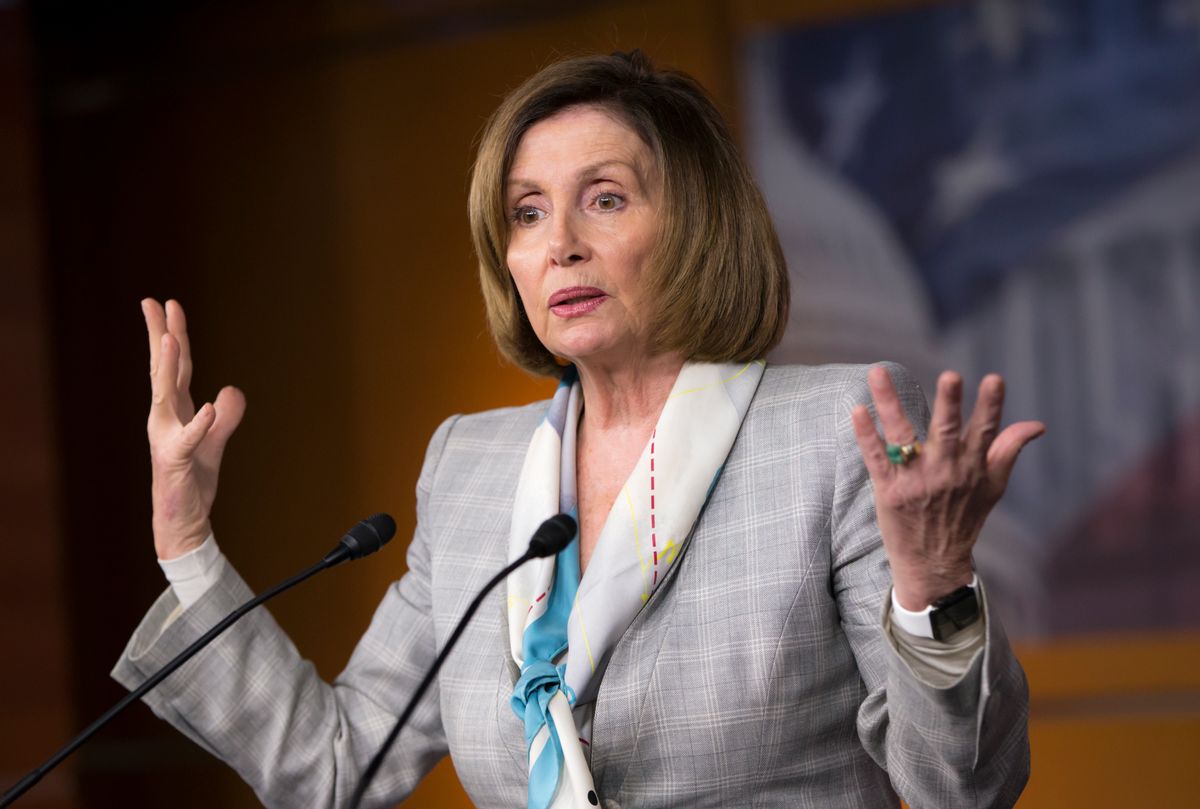 House Minority Leader Nancy Pelosi of Calif., defends Hillary Clinton's use of a private email server in the wake of a State Department oversight report today that stated she broke federal rules, Wednesday, May 25, 2016, on Capitol Hill in Washington. As Congress prepares to get out of town for a week-long Memorial Day recess, Pelosi also said Republicans in Congress are dysfunctional and are responsible for the lack of funding to combat the Zika virus. (AP Photo/J. Scott Applewhite) (AP)
--

Since the "Tea Party election" of 2010, Democrats have not held a majority of seats in the U.S. House of Representatives. A variety of factors are involved, including liberals' migration to urban areas as well as some successful redistricting efforts by Republicans in state legislatures that have tilted congressional seats in their favor.

Another factor at work, however, is that less-populated areas in the country have become more Republican over time. Gerrymandering, the practice of drawing district boundaries to favor one party over another, has probably helped secure a Republican House majority until at least the next census in 2020 when the congressional seats must be reapportioned. But it doesn't explain why the GOP holds the governor's office in 33 states and has a majority in the U.S. Senate. You can't gerrymander those boundaries.

One possible factor that Democratic leaders are now contemplating is the issue of abortion.

Both major parties have clearly diverged on the legality of terminating a pregnancy in recent decades, with Republican elites opposing it and Democratic elites favoring it. (Well into the '90s, there were prominent pro-choice Republicans and prominent anti-abortion Democrats.)

More generally, 70 percent of those identifying as Democrats said abortion should be legal in all or most cases in a survey conducted last year by the Pew Research Center. By contrast, just 59 percent of Republicans polled said that abortion should be illegal in most or all circumstances.

Democrats' greater unity about abortion isn't any real advantage, however, because the party's voters are so tightly concentrated in urban areas. This can be seen clearly in this map of the 2016 presidential vote by county, which I generated using tools provided by Blueshift. Despite the fact that Hillary Clinton won the popular vote by close to 3 million votes, her supporters were so heavily distributed in just a few areas that she still lost in the Electoral College tally. As the map indicates, there are many more counties that are strongly or marginally Republican compared with those that are heavily or slightly Democratic.

Since all these highly Republican areas also have House and Senate seats, this means that if Democrats want to be competitive, they must put forward candidates who can find ways of appealing to conservative Democrats, moderate Republicans and independents.

(An opposite dynamic prevails for Republicans, however. Because there are so many potential House seats that lean solidly to the right, conservative politicians are at greater risk in party primaries than in general elections.)

How to solve this geographic political puzzle is the dilemma that now faces Democratic leaders, and one they've been sniping about with one another since Donald Trump's surprise victory last November. The problem for the party is even further exacerbated by the fact that Democrats have been becoming more liberal since Obama first ran for president while rural and exurban areas have turned more conservative.

The issue of abortion has become a flash point for this controversy in the last few weeks after Sen. Bernie Sanders was criticized for lending support to an Omaha, Nebraska, mayoral candidate who has supported bills requiring doctors offering abortion services to inform patients about where they can obtain ultrasound services beforehand. (Such laws are presumably aimed at convincing some women to change their minds about abortion.)

After the Democratic National Committee's chair, Tom Perez, also came under fire for attending the same "unity rally," he responded fiercely that candidates for his party should always support abortion rights.

“Every Democrat, like every American, should support a woman’s right to make her own choices about her body and her health,” Perez said in a statement. “That is not negotiable and should not change city by city or state by state.”

Perez's comments appear to have rankled Rep. Nancy Pelosi, the highest-ranking woman in the party. While she is pro-choice herself, the former House speaker pushed back on the idea that all Democrats have to support abortion rights.

“This is the Democratic Party. This is not a rubber-stamp party,” Pelosi said in an interview with The Washington Post published on Tuesday.

“I grew up Nancy D’Alesandro, in Baltimore, Maryland; in Little Italy; in a very devout Catholic family,” she said. “Most of those people — my family, extended family — are not pro-choice. You think I’m kicking them out of the Democratic Party?”

How Democrats choose to address their internal abortion controversy will likely continue to be a thorny topic for at least the medium term. Polling on the issue continues to be very mixed, with the results often dependent on how the question is phrased. (Many Americans are personally uncomfortable with abortion but don't want to see it become completely illegal.) Furthermore, many of the states where pro-life sentiment runs high tend to be swing states — including the four Rust Belt states that gave Donald Trump the presidency.

Pro-choice activists are arguing that the Democratic Party should remain true to protecting women's rights while many party professionals are arguing for flexibility in the service of stopping Trump. Which side will ultimately prevail remains to be seen.