This LGBT civil rights bill could make history, but there’s a problem

And its name is Donald Trump 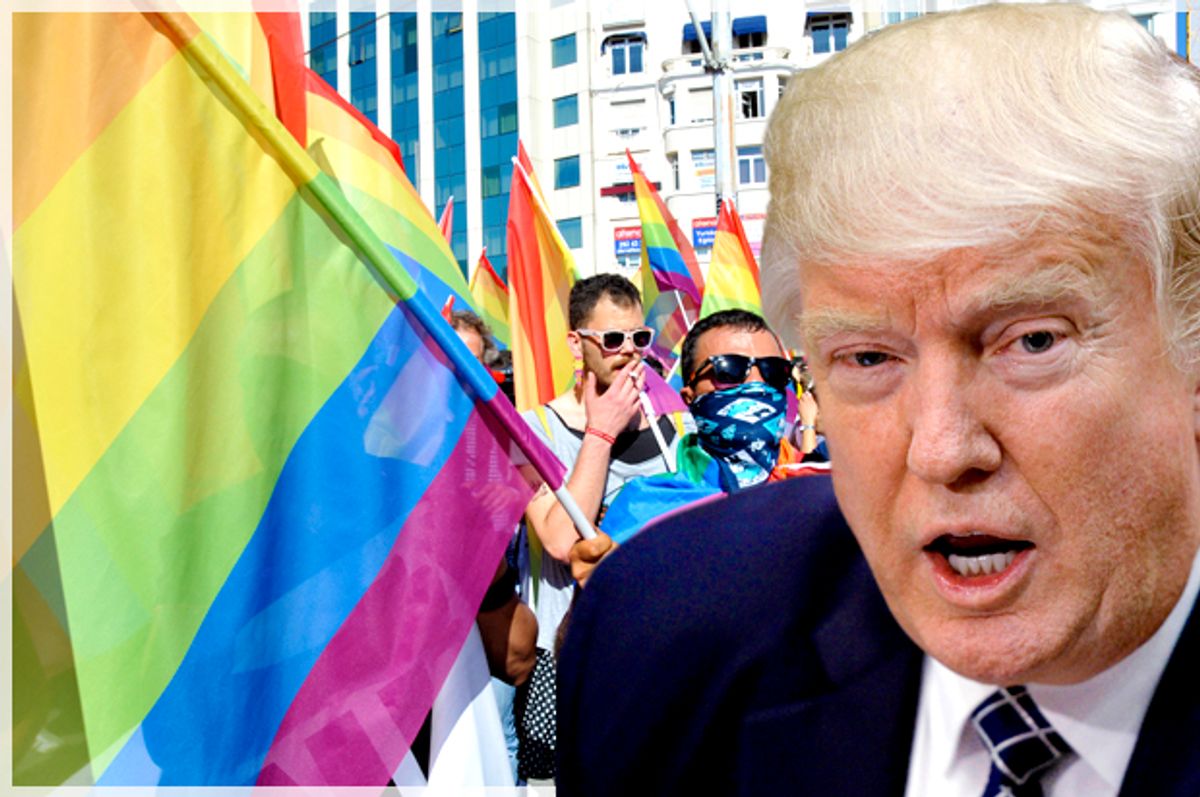 A historic number of legislators are co-sponsoring a bill to wipe out anti-LGBT discrimination in areas like housing and employment. But amidst Trump’s decision to sign an order expanding protections for “religious liberty,” the bill faces a major fight from an administration viewed as less than friendly to equality.

So far, 240 Democrats — 46 in the Senate and 194 in the House of Representatives — have signed onto the Equality Act, a bill that would amend the landmark Civil Rights Act of 1964 to include gender identity and sexual orientation. According to the Human Rights Campaign, the existing federal law prevents bias in many aspects of public life including, “employment, housing, credit, education, public spaces and services, federally-funded programs and jury service.” Currently, the Civil Rights Act protects identity categories like national origin, race, and sex, but lacks LGBT inclusions.

Rhode Island representative David Cicilline, a co-author of the bill, believes it’s time for that to change.

“The Equality Act represents a simple idea, that everyone, including members of the LGBT community, is entitled to equal treatment under the law, and the right to live free of discrimination,” said Cicilline while introducing the bill earlier this week. “But today, in most states, you can get married on Saturday, post your wedding photos on Facebook on Sunday, and get fired from your job or kicked out of your apartment on Monday just because of who you are.”

Although a 2015 study from the Public Religion Research Institute shows that 71 percent of Americans believe it should be illegal to fire someone for being LGBT, 50 percent of Americans live in states where they can be let go from their job simply because of who they love or which gender they identify with. Currently, thirty-two states lack any kind of employment protections for LGBT workers.

Unfortunately, that discrimination is all too common. A recently released report from left-leaning think tank Center for American Progress found that of the 900 people the organization surveyed, 25 percent had experienced anti-LGBT bias in the past year​, including their place of employment. Bias in this case included being let go, passed over for a promotion, or experiencing harassment by co-workers due to sexual orientation or gender identity.

In the face of this, many LGBT Americans chose to remain silent about their sexual orientation or disclose their gender history at work in order to avoid discrimination.

One example found by the Center for American Progress is Maria. Though she lives in queer-friendly Durham, North Carolina her work forces her to travel to less-inclusive town. In a state where recently passed anti-LGBT laws have consumed column inches, she isn't out to her bosses. “I wonder whether I would be let go if the higher-ups knew about my sexuality,” she said.

There are other, less cut-and-dry issues awaiting LGBT Americans at work.

Another of the Center's respondents, David, reports that he began to play down his sexuality on the job when he stopped being invited to work mixers and social events after coming out to his colleagues. He began lowering his voice to sound “less feminine,” he says, avoiding “wearing anything but a black suit” in order to fit in with his straight male colleagues. “When you’re perceived as feminine — whether you’re a woman or a gay man — you get excluded from relationships that improve your career,”

“Discrimination against the LGBT community is a very real and very pernicious problem,” said Laura Durso, the Vice President of the LGBT Research and Communications Project at CAP, in a statement provided exclusively to Salon. “LGBT people continue to monitor their own behavior and take sometimes drastic steps to avoid stigma, from removing items off a resume to cutting people out of their lives to moving away from family. LGBT people need the same tools to prevent and respond to discrimination as their peers.”

None of this is exclusive to the workplace. LGBT people are disproportionately likely to be victims of discrimination in nearly all sectors of society. Nearly half of all queer and transgender senior citizens report experiencing bias in housing, whether that’s from a nursing home or assisted living facility. Nineteen percent of trans people say they’ve been turned away from a doctor because of their gender identity. Although LGBT people are stereotyped as living wealthy, comfortable lives, queer and trans individuals are disproportionately likely to live in poverty because of pervasive barriers to entry throughout their lives.

LGBT advocates believe that legislation like the Equality Act would go a long way toward addressing these myriad harms. Rebecca Isaacs, the Executive Director of Equality Federation said that the bill, if passed, could “level the playing field so everyone has a fair shot to get ahead and provide for themselves and their families.”

There’s a major elephant in the room, though, and it belongs to the Grand Old Party. The republicans control both houses of Congress, as well as the presidency. Just one Republican, Florida congresswoman Ileana Ros-Lehtinen, has signed onto the bill, and even she plans to retire. The previous iteration of the Equality Act, which was introduced in 2015, died in committee as a result of major opposition from the Republican Party, led by Rep. Paul Ryan. Ryan is now the Speaker of the House.

The GOP doesn’t appear to have changed its tune in the past two years. The Heritage Foundation, an influential conservative think tank, has claimed that a federal nondiscrimination bill would jeopardize “fundamental First Amendment rights.”

“[The bill] creates new, subjective protected classes that will expose employers to unimaginable liability, and it would increase government interference in labor markets in ways that could harm the economy,” writes Ryan T. Anderson, a senior research fellow at the Heritage Foundation. “It would also threaten the freedom of citizens and their associations to affirm their religious or moral convictions, such as that marriage is the union of one man and one woman and that maleness and femaleness are not arbitrary constructs but objective ways of being human.”

It's hard — perhaps impossible — to argue that freedom of religion is in danger from any piece of pro-LGBT legislation. Not only are the two not in conflict, but freedom to worship has a starring role in the Constitution. Regardless, the rarely held, but fervently believed, theory that LGBT rights do indeed constitute an existential threat to religious liberty is the very logic underpinning the executive order Trumped signed today. Moreover, it's an argument persuasive enough to conservative legislators that they feel no need to reach across the aisle on LGBT issues.

Before he was president, Donald Trump actually supported an LGBT-inclusive civil rights bill. In a 2000 interview with The Advocate he called it “simple” and “fair”. Since then, his objectives have changed.

On top of the executive order he signed today and his often self-contradictory statements on the matter, Trump voiced support for the First Amendment Defense Act (FADA), a bill that would give businesses and individuals license to discriminate against LGBT people. It would prevent the government from taking action against anyone who, “believes or acts in accordance with a religious belief or moral conviction that: (1) marriage is or should be recognized as the union of one man and one woman, or (2) sexual relations are properly reserved to such a marriage.” It's a statement of where is allegiances now lie.

Despite facing numerous roadblocks to introduction — including the one sitting at the Resolute Desk — LGBT advocates believe that it’s important to keep fighting for the full civil rights of queer and trans people. Senator Patty Murray, who helped introduce the bill on Tuesday, claimed that the president’s perceived anti-LGBT agenda is proof positive that, “there has never been a more important time to keep up this fight.” Cicilline added in an op-ed for The Advocate that it’s “important that the American people know who is fighting for full equality.”

“The American people deserve to know who will stand up and speak out for those on the margins of society,” he said. “Donald Trump and Republicans in Congress want to bring us back to a time when LGBT people were denied basic fundamental rights.”

Trump has yet to comment on the re-introduction of the Equality Act.