Why #FireColbert played out differently than #CancelColbert 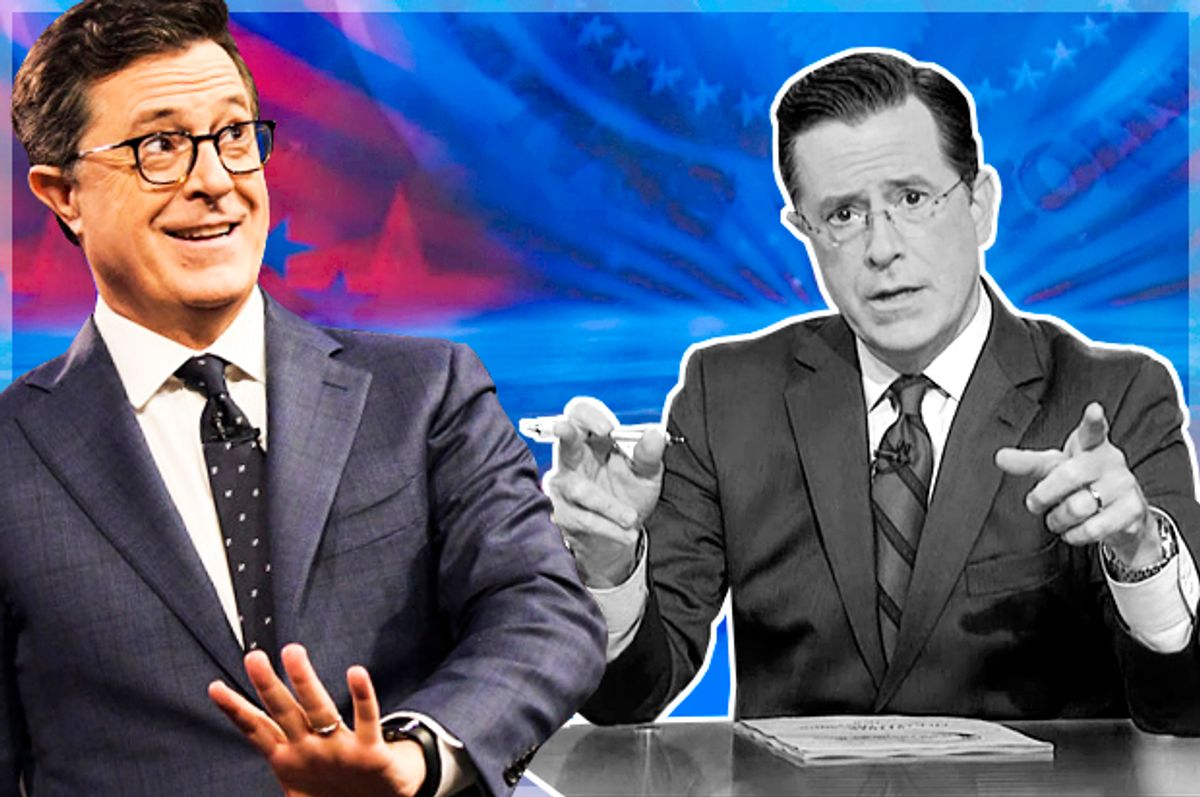 Earlier this week Stephen Colbert made a joke during his "Late Show" broadcast suggesting that President Donald Trump's mouth was only truly useful as a vessel for Russian President Vladimir Putin's — ahem — member. It was funny. It was also hurtful. Soon the hashtag #FireColbert, fueled in part by less-than-genuine alt-right efforts, was trending on Twitter in response.

Colbert addressed the controversy on his show last night. “[W]hile I would do it again, I would change a few words that were cruder than they needed to be,” he said. “I’m not going to repeat the phrase, but I just want to say for the record, life is short, and anyone who expresses their love for another person, in their own way, is to me, an American hero. I think we can all agree on that. I hope even the president and I can agree on that. Nothing else. But that.” Still, it looks like he'll carrying a bruise for at least a little while.

It wasn't the first time that Colbert found himself in Twitter's crosshairs. In 2014 #CancelColbert trended in the wake of yet another joke, this one tweeted out on behalf of the bespectacled entertainer during his tenure on the satirical news show “The Colbert Report.” It was a joke not all that different from this week's "Late Show" rip. Yet, while the two jokes roughly parallel each other in construction, the responses to them are at right angles.

Back in 2014 the account of "The Colbert Report" account tweeted, “I am willing to show #Asian community I care by introducing the Ching-Chong Ding-Dong Foundation for Sensitivity to Orientals or Whatever.” The joke was an attempt to satirize the announcement by Washington Redskins owner Daniel Snyder that he was creating a charitable organization benefitting Native Americans called the Washington Redskins Original Americans Foundation. Colbert, through his bloviating conservative character known "Stephen Colbert," was exposing the absurdity of claiming to help a minority group while simultaneously insulting it.

In context, it was a decent, edgy joke. Presented out of context — as it was in that tweet — it was a punchline missing a setup and a step over a certain invisible line. Hence the #CancelColbert response.

Of course, “The Colbert Report” was not canceled (or didn't you notice?). The outrage dissipated soon after the host — with the help of the internet — supplied the context. Still, it left many uneasy. Yes, the rich, misguided and very white Daniel Snyder was the target in 2014. But it's hard to untangle whether viewers were laughing at the joke's concept or at the offensive, anti-Asian voice Colbert/"Colbert" used for it.

As Jay Caspian Kang wrote on The New Yorker’s website at the time, “There’s a long tradition in American comedy of dumping tasteless jokes at the feet of Asians and Asian-Americans that follows the perception that we will silently weather the ridicule. . . . Even when you want to be in on the joke — and you understand, intellectually, that you are not the one being ridiculed — it’s hard not to wonder why these jokes always come at the expense of those least likely to protest.”

Despite all that, the prevailing opinion in the related think pieces from 2014 cast #CancelColbert as a hasty attempt at eliciting outrage. In contrast, the current popular take on #FireColbert holds that, while Colbert should keep his job, the joke itself was offensive and therefore unfunny.

The difference may be the jokes themselves, but perhaps it's something else. The character "Stephen Colbert" told many jokes like the Ching-Chong Ding-Dong one, but for the most part he was given free rein to do so. Why? Because it was under the guise of a foolish character and it was ironic.

Once Colbert removed the scare quotes from his name, once he transferred to the "Late Show," he lost his shield. Without that, he's come under a different kind of analysis. Craig Konnoth made a compelling point in The Washington Post when he wrote, “homophobia, even of the ironic variety, can be harmful. To those less enlightened than the progressive jokesters and their audiences, this brand of humor sends the message that gay jokes are a perfectly acceptable way to undermine a man’s social status.” Jokes that hurt people based on their unchangeable identities may induce laughs, but they also induce tears. Sometimes, the world can shoulder that exchange and deal with it. With less irony and no "Stephen Colbert" to brace his fall, the tradeoff just didn't work this time.

Colbert's "Late Show" response is being referred to as an “unapologetic” “non-apology apology.” But what else could he say? The statement, like the joke, was sincere. And that’s where he may have gone wrong. “This is the real Stephen Colbert. I mean everything I say on this show” wouldn’t have worked this time.