The "pro-life" party has become the party of death: New research on why Republicans hate poor and sick people

New data and the health care debate reveal how Republicans feel about poor people who get sick: They deserve it 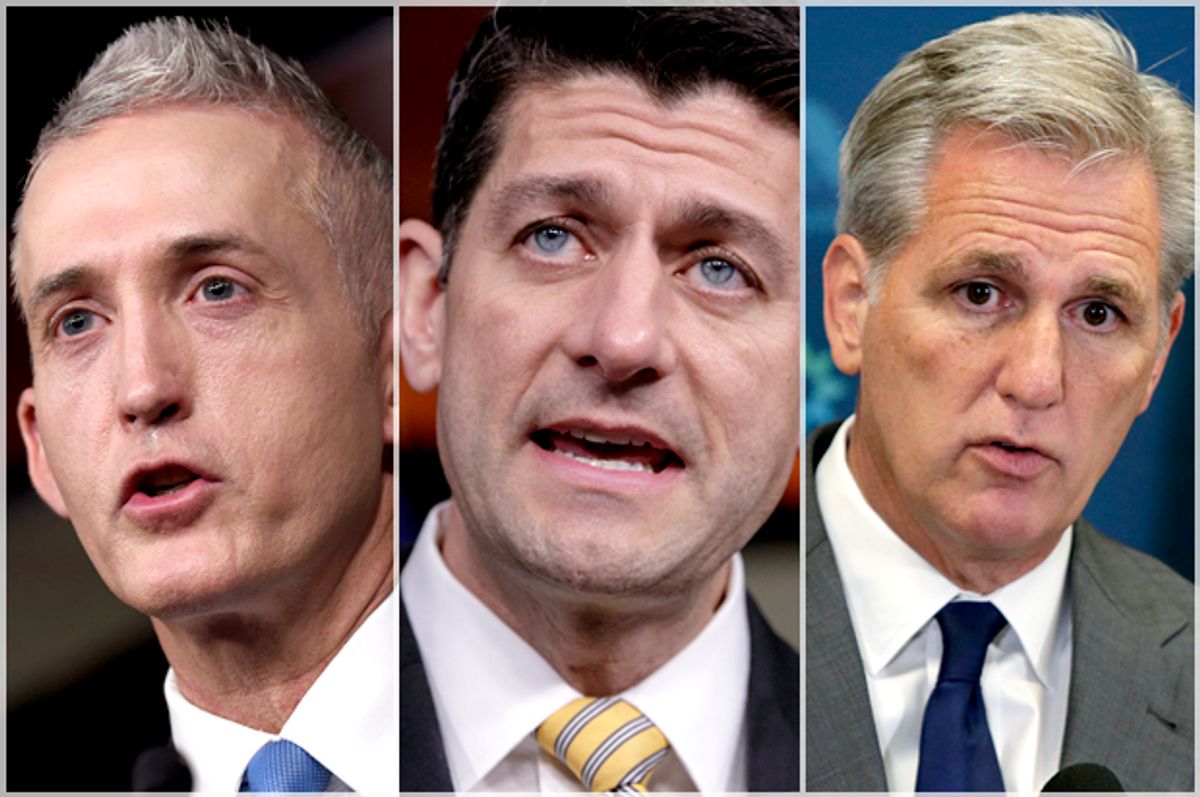 On Thursday, Republicans in the House of Representatives will attempt to force through a health care "reform" bill that is likely to leave millions of Americans without health insurance, especially those who suffer from chronic illnesses such as cancer, diabetes and heart disease. It has been estimated that if the Republican Party is successful in eliminating the Affordable Care Act that at least 43,000 Americans a year will die from lack of adequate health care.

The Republican Party is pursuing this policy in order to give millions of dollars in tax cuts to the very rich. President Trump, who is a billionaire, would financially benefit if Republicans succeed in repealing the ACA.

It is abundantly clear that Trump and his party possess a deep disdain for sick people, the poor and other vulnerable members of American society and wish to do them harm.

For example, several days ago Rep. Mo Brooks, R-Ala., said this during an interview on CNN:

My understanding is that [the new proposal] will allow insurance companies to require people who have higher health care costs to contribute more to the insurance pool. That helps offset all these costs, thereby reducing the cost to those people who lead good lives, they’re healthy, they’ve done the things to keep their bodies healthy. And right now, those are the people — who’ve done things the right way — that are seeing their costs skyrocketing.

These comments are abominable. Brooks believes that babies and children with serious illnesses deserve their fate, or that those who have "done the things to keep their bodies healthy" and still develop chronic diseases like cancer have done things the "wrong way". The Republican Party's war on the American people and the common good should be condemned by all decent human beings. Any Republicans who vote to repeal the Affordable Care Act should be publicly shamed and voted out of office.

A new survey from the Pew Research Center offered some helpful insights on these questions:

In assessing why some people are poor, 53% think it is because of circumstances beyond their control, while 34% attribute it to a lack of effort. There has been little change in these opinions in recent years, according to a survey in December.

By about three-to-one (66% to 21%), Republicans and Republican-leaning independents say hard work, rather than a person’s advantages, has more to do with why someone is rich. By nearly as wide a margin, Democrats and Democratic leaners say the opposite: 60% say a person is rich because they had more advantages than others, while just 29% say it is because they have worked harder.

As with many other issues, partisan differences in views of why people are rich and poor have increased in recent years. Since 2014, the share of Republicans who say a person is rich more because they have worked harder than others has risen 12 percentage points, from 54% to 66%. Democrats’ views have shown less change.

This survey from Pew continued:

Republicans are more likely to say the reason someone is poor generally has more to do with of a lack of effort (56%) than circumstances beyond a person’s control (32%). By 71%-19%, more Democrats say that circumstances beyond one’s control are generally more often to blame for why a person is poor. The share of Democrats who link a person being poor to a lack of effort has declined since 2014 (from 29% to 19%).

A belief in the "just world hypothesis" is a unifying theme in Pew's findings: Republicans and conservatives are more likely to hold the erroneous belief that good things happen to good people and that individuals who suffer disadvantages in life that are out of their control are somehow responsible for their circumstances. The just world hypothesis is a fallacy.

In reality, people exist in a society where their life trajectories are largely determined by impersonal social and political systems. Nevertheless, the just world hypothesis can be compelling. It allows the privileged, the powerful and the rich to rationalize their opportunities: "I earned it! Those people are lazy!" "Good things happen to good people! Those people are immoral and made bad choices unlike me!" "Their problems aren't my responsibility!"

Pew's recent findings also demonstrate the enduring power of the Horatio Alger myth and the conception of meritocracy in America society.

The Horatio Alger myth — a belief that hard work and motivation determine success in America — had its origins in a series of dime-store novels written between 1860 and 1899. These absurd stories of success during the Gilded Age were derided and mocked even then by serious social reformers as well as luminaries such as Mark Twain.

The claim that America is a meritocracy, where talent and hard work are more important than good fortune or accidents of birth, goes far back into our history. It was also captured in a famous dystopian short story from 1958 by Michael Young, about a world in which people were constantly evaluated by tests and other means to ensure that the "best" people rose to the top. Of course, this supposed meritocracy was grossly unfair and unequal to the vast majority of citizens.

Social scientists have repeatedly demonstrated that American (and Western) society is extremely hierarchical and that family wealth and income — as well as race and gender — are more important than "hard work" in determining a given individual's intergenerational class mobility.

Pew's findings echo in the debate about health care policy, which reflects the belief among Republicans and conservatives that those who seek assistance from society have no right to receive it. If people do not have the resources to provide adequate health for themselves and their families, that's their own fault. Most important, the sick deserve their illnesses; the healthy and strong have earned their advantages.

Once again, the repeated efforts by the Republican Party to repeal the minimal protections offered by the Affordable Care Act serve to remind us that conservatism is a type of socially motivated cognition that minimizes any sense of human obligation and connection to other people, outside a narrowly defined kin or other peer group.

Today's version of American conservatism is also a celebration of selfishness — and a belief that true freedom and liberty are based on a perverse individualism with little sense of common decency or linked fate with someone's fellow citizens. Today's American conservatism also embraces an extreme form of neoliberalism whereby human worth and dignity are determined by profit-and-loss statements and capitalism and democracy are confused with one another. Ultimately, American conservatism is a value system that is antisocial, anti-democratic and anti-freedom.

There is a moral obligation to speak plainly and directly in a time of crisis. To wit: The Republican Party's so-called health care reform is designed to kill, injure and bankrupt the poor, the sick and the weak, in order to line the pockets of the 1 percent. As Republicans have repeatedly shown, the supposed "party of life" is actually the "party of death."

It is long overdue that the American people begin to use this more accurate language to describe the Republican Party, Donald Trump and the right-wing voters who support them. The debate about "repealing and replacing" the Affordable Care Act is not about normal political disagreement or budgetary priorities. It is about who should live and who should die and whether that should reflect how much money you have in your bank account.