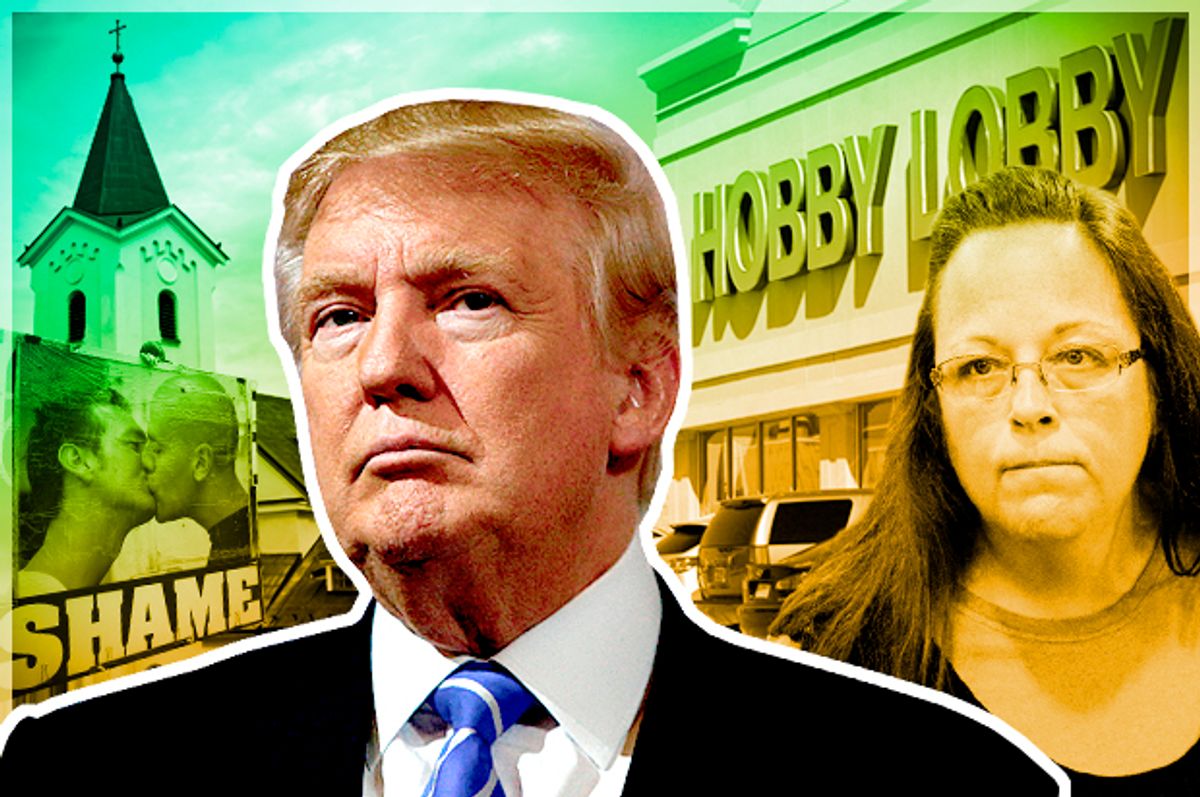 The religious right boosted the thrice-married, porn-loving, pussy-grabbing Donald Trump into the White House and now it appears they are going to get paid. Politico has reported that on Thursday, which is the National Day of Prayer, Trump will likely sign a "religious liberty" executive order intended to grant broad rights to religious conservatives to discriminate against LGBT people and women perceived to be sexually immoral.

The scare quotes around "religious liberty" are deliberate. If this executive order is anything like the one leaked to The Nation in February, then it has nothing to do with religious liberty, as the term is commonly understood. In fact, the leaked executive order seems to violate the First Amendment, in that it privileges one set of religious beliefs — those of fundamentalist Christians — over all others.

The original draft of the executive order covered "any organization, including closely held for-profit corporations" or any individuals "when providing social services, education, or healthcare; earning a living, seeking a job, or employing others; receiving government grants or contracts; or otherwise participating in the marketplace, the public square, or interfacing with Federal, State or local governments.”

This broad category of people would be allowed to discriminate, under the guise of religion, against LGBT people or women who want or have used reproductive health services, such as abortion or some forms of contraception. Sarah Posner of The Nation explained:

Language in the draft document specifically protects the tax-exempt status of any organization that “believes, speaks, or acts (or declines to act) in accordance with the belief that marriage is or should be recognized as the union of one man and one woman, sexual relations are properly reserved for such a marriage, male and female and their equivalents refer to an individual’s immutable biological sex as objectively determined by anatomy, physiology, or genetics at or before birth, and that human life begins at conception and merits protection at all stages of life.”

“This isn’t about religious liberty at all," said Camilla Taylor, senior counsel for Lambda Legal, in a phone interview. "It’s a thinly veiled assault on LGBT people and anyone who needs reproductive health care,” said Taylor, eferring to the draft order that had been leaked in February.

It's possible, and even likely, that the White House has tried to update the new executive order in the hopes that it will be stand up to a court challenge. But that's a move that's been seen before from this administration when it came to assaults on First Amendment rights. When it was clear that Trump's first "Muslim travel ban," which was clearly an attempt to discriminate against people based on religious beliefs, would fail in court, the administration slapped together a new one with a few tweaks meant to make the bigotry less overt. Trump's second travel ban does not seem to be passing muster in the courts either, though the matter is still in litigation.

Legally, the administration is in a bind. The "religious liberty" order, reportedly a pet issue of Vice President Mike Pence, is clearly meant to address an anti-LGBT and anti-feminist constituency on the religious right. The leaked draft reflected this desire by delineating four religious beliefs that receive special protection. The problem with this is that privileging one set of beliefs over another seems to be a clear violation of the First Amendment, which expressly forbids the government establishment of religion.

A way to avoid that might be for Trump to sign an executive order that grants general rights to federal employees or anyone contracting with the federal government to refuse to follow any law that conflicts with their stated religious beliefs. That would avoid privileging one set of beliefs over another, but it could also cause chaos. What if federal employees, for instance, started refusing to serve evangelical Christians on the grounds that they disapprove of their theology? What if racists refused to serve black people on the grounds that their religion forbids race mixing? Privileging a narrow set of religious beliefs without appearing to privilege a narrow set of religious beliefs is a tall order for even the sharpest legal minds. And this is the Trump administration we're talking about.

The legal morass is one set of problems, but there is also the very real human cost if the Trump administration is able to get away with using religion as cover for legalizing discrimination.

“It is an effort to drive LGBT people back into the closet," Taylor argued. The prospect for members of that community, she said, is that "your interactions with your own government [will be] constrained by the possibility that you may be interacting with someone who despises you and who now feels that they have been invited to discriminate against you."

For instance, Taylor noted, the original draft of the executive order would allow child placement agencies to discriminate against same-sex couples.

“What that would mean is that if a mother is in crisis and needs to get her act together, either because she’s struggling with addiction or goes to jail for a short period," Taylor said, "and her child has to go into the foster care system, the loving lesbian aunt and her spouse would not be able to get licensed as foster parents and be able to take care of that child.”

Similarly, hospitals and clinics could refuse to treat LGBT patients or women who have had abortions with much less fear of losing Medicare or Medicaid funding, Taylor argued.

It's possible that Trump will sign a watered-down version of the bill that does not specifically mention anti-LGBT or anti-choice beliefs. But even if he does, both religious fundamentalists and members of the groups they target for abuse will understand that this bill is intended to protect anti-LGBT and sexist discrimination, and that could have negative ramifications.

That's what happened with the Muslim travel ban. Even after it was revised and eventually blocked by the courts, the fact that the ban was ever imposed in the first place sent shock waves of fear through Muslim communities and empowered racists to act out. Many Muslims are still afraid to travel and teachers hae reported that young students are crying and having panic attacks in school, for fear that they will be targeted again.

A similar thing happened in Indiana when Pence, the state's former governor, signed a "religious liberty" bill. Pence told the press and the general public that the bill had nothing to do with anti-LGBT discrimination, but then turned around and gave the opposite signal to the religious right by reaching out to anti-gay activists for support. No one appeared to be fooled by Pence's "who me, anti-gay?" act, and public pressure mounted until Pence caved and added a provision to the bill that banned discrimination on the basis of sexual orientation or gender identity. That move effectively nullified the badly disguised purpose behind the bill.

In the end, it may not matter much to Trump and Pence if the executive order doesn't hold up. Republicans in Congress recently failed yet again to defund Planned Parenthood in budget negotiations, and religious conservatives are growing hungry for some kind of assault on people whose sex lives they disapprove of. An executive order that collapses in court but sends a shock wave of fear through the LGBT community isn't an ideal outcome for the religious right — but these zealots will definitely give the president credit for trying.