The big gay lie of “Guardians of the Galaxy: Vol. 2”

Despite promises of LGBT inclusion, Marvel still hasn't given viewers a queer hero 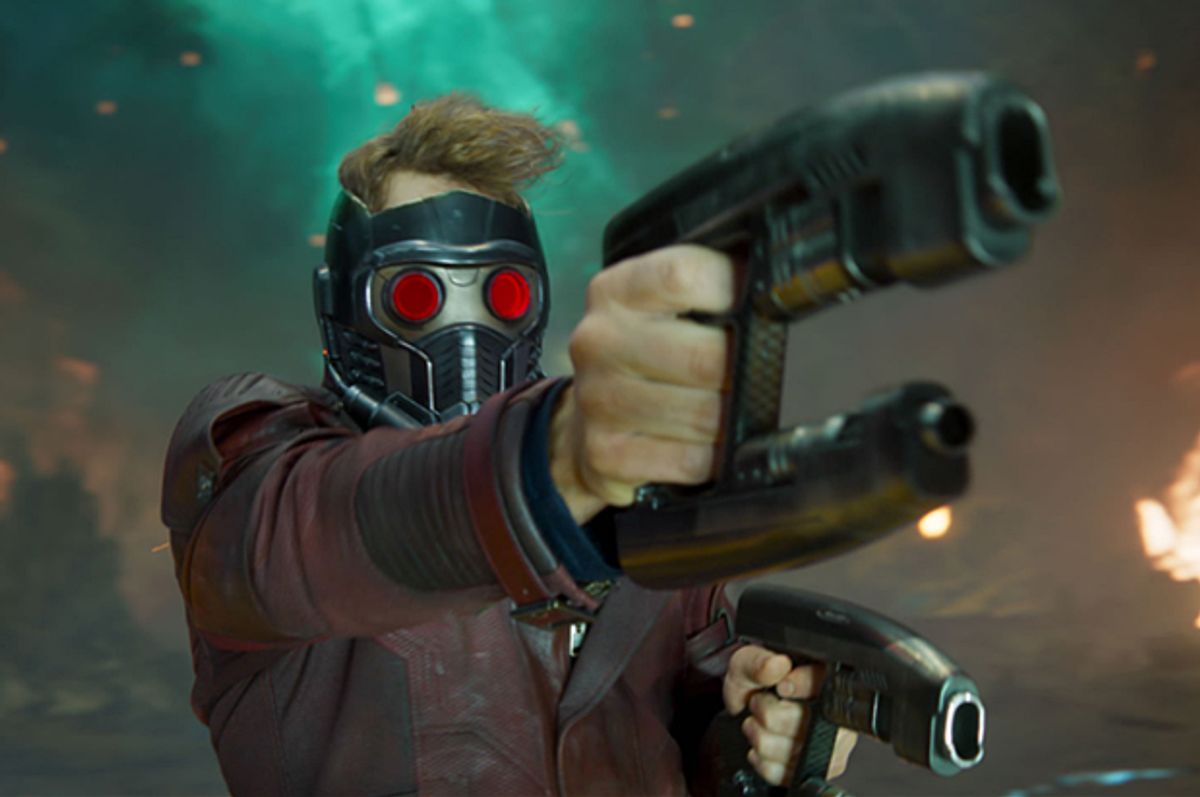 Chris Pratt in "Guardians of the Galaxy Volume 2" (Marvel)
--

It’s getting pretty old hat by now: “Guardians of the Galaxy: Vol. 2” might be a big step forward for LGBT representation — that is, unless you decide it isn’t. Director James Gunn had hinted that there could be a queer or transgender character in "Guardians of the Galaxy: Vol. 2," the sequel to Marvel’s surprise 2014 smash starring a ragtag team of space vigilantes who save the universe from intergalactic evil. Gunn, though, played coy on the subject of LGBT representation, telling fans to decide for themselves. “I say watch the movie,” he advised. “Check it out. See what you think.”

“Vol. 2” is a fun, rollicking ride, maybe a little less fun than the original, but the question of LGBT inclusion makes the experience of watching the movie more than a little distracting. It’s like a bizarre, gay version of an Agatha Christie mystery. As the Guardians toss around one-liners like a game of hand-grenade hot potato, you might find yourself thinking: “Could the gay character be someone in this very room? Could it be shiny blue father figure Yondu (Michael Rooker)? Or maybe the vengeful Nebula (Karen Gillan), a disgraced princess whose body parts have been replaced by machinery? And hey, why not the talking baby tree (Vin Diesel) or his raccoon pal with the rocket launcher (Bradley Cooper)? Perhaps even the poorly named space pirate Taserface (Chris Sullivan) could be on the downlow.

It’s a ridiculous game, but also a futile one. The correct answer, depending on your interpretation, is Stakar (Sylvester Stallone), who makes a brief cameo in a handful of scenes. In the original 1969 comic strip, Stakar has a female alter ego — his adoptive sister, Aleta. Writer Andrew Belonsky described the character as “transgender” in an Out magazine essay about the comic's queer history. The truth, however, is a bit more complicated than that.

Much like the Edward Norton and Brad Pitt characters in “Fight Club,” Stakar and Aleta cannot physically be present in our reality at the same time. When one appears in our universe, the other awaits suspended in a state of limbo. In the comic, Aleta falls in love with Vance Astro, a hero who struggles with the fact that the object of his affection is literally a woman trapped inside the body of a man. When the two get close, her brother takes control.

Given that Aleta is also her brother’s ex-wife, with whom she shares three children, and that the series was developed almost five decades ago, it’s difficult to read a clear 1:1 trans correlation (the term “transgender” didn't exist in 1969). The potential LGBT implications of the storyline, though, gave Gunn quite a bit to play with should he so choose.

The problem is that “Vol. 2” doesn’t do that. Although the film may set up Stakar as a potential villain for the series’ inevitable next installment, Stallone’s presence so far is little more than a nod to the comic's fans. Stakar is not yet a fully developed character and his already questionable trans status simply never comes up.

The subject matter may not be dealt with in the upcoming "Guardians of the Galaxy: Vol. 3" either. Aleta, played by Michelle Yeoh, does in fact appear in “Vol. 2” via a brief cutaway. She appears, however, as a completely separate entity from Stakar. It could be that Aleta has already broken loose from him — something that does happen in the original comic — or it could be that “Guardians” is erasing its queer-adjacent subtext altogether.

It wouldn’t be the first time that comic book movies have straightwashed their source material. Although the characters Deadpool, Mystique and DC hero Constantine are all canonically bi or pansexual in print, none of them show it in their big-screen appearances. Ryan Reynolds, who plays Deadpool, has claimed that he’s open to Deadpool getting a boyfriend, but we've yet to hear his studio echo that.

All the excitement over the Marvel Cinematic Universe’s “first gay character” — whenever he or she appears — shows how incredibly low the bar is for LGBT inclusion in Hollywood. Queer viewers are so hungry for any scraps the movie industry will throw at us that we’ll start salivating over literally nothing. It’s as if the studio is continually setting the table for a grand feast where everyone’s invited, but then when you sit down to eat, the courses never come.

What directors, screenwriters and producers have yet to learn is that if you want your movies to have queer characters, you need to do the work of actually writing them.

Recently, the “Power Rangers” reboot was applauded for including a “groundbreaking” queer superhero. Prior to the film’s debut, actress Becky G proclaimed how “proud” she was to play an out Latina character, Trini. The director, Dean Israelite, promised that her identity would be “pivotal.” But her character’s coming out moment is a throwaway scene that lasts for a handful of seconds: Fellow ranger Zack (Ludi Lin) asks if she’s having “boyfriend problems” or “girlfriend problems.” Trini sidesteps the question, claiming that she doesn’t like labels.

To call this anything but an obfuscation of the character’s lived identity is absurd, If you saw "Power Rangers" without all the self-congratulatory promotional back-patting, you might not even think anything of it. It’s meant to be subtle coding for queer viewers, but this is 2017. LGBT viewers deserve more than having our personal lives treated as Magic Eye pictures, only visible if you squint really hard.

In last year's “Star Trek: Beyond." Crewman Sulu (John Cho) is met at the airport by his hunky male partner and their daughter. You know this because the marketing team told you about it in advance. If you hadn’t already been tipped off to look for the movie’s big gay reveal by Paramount's publicity department, the handsome gentleman waiting for the Starfleet helmsman could have been Sulu’s butler or brother, his comely Uber driver or one of the singing baby merchants from “Cop Rock.”

George Takei, who played Hikaru Sulu in the original series, called it a “whisper of a scene,” but even that reading is generous. It’s frantic silence — like a mime having a seizure. I heartily advise any studio marketing team ready to blitzkrieg queer audiences with the next empty gay milestone to read Takei’s statement on #SuluGate. In an interview, he advised the forces behind the “Star Trek” film series to handle its gays with care. “Create a fresh, new, original character,” Takei said at last year’s 50th anniversary convention in Las Vegas. “Be as bold as Gene Roddenberry would have been.” Yes, writers and producers should treat LGBT characters with depth, writing stories that matter to queer audiences. Be bold.

One of the best storylines in the new “Guardians” film is the sibling rivalry between Nebula and her sister, Gamora (Zoe Saldana), who were continually pitted against each other as children. The two literally fought for their father’s love, and every time that Nebula lost in battle, the sadistic patriarch would strip her of a different appendage. Gamora always won. Nebula, now a robot without a soul, blames her sister for what’s become of her. The film offers a fresh and surprisingly resonant look at the costs of female competition. Just imagine what the same adept writers could have done with an LGBT plot line.

And, really, LGBT audiences aren’t asking for all that much. We just want to be treated like we exist, rather than playing a giant guessing game with our entertainment in the hope that we might — maybe — see ourselves reflected. Stallone could be the genderfluid heartthrob audiences have been waiting for, but to call “Vol. 2” anything but a big queer tease is actively insulting to all of us who are forced to keep on waiting.