Why “The President Show” may be here for the long haul 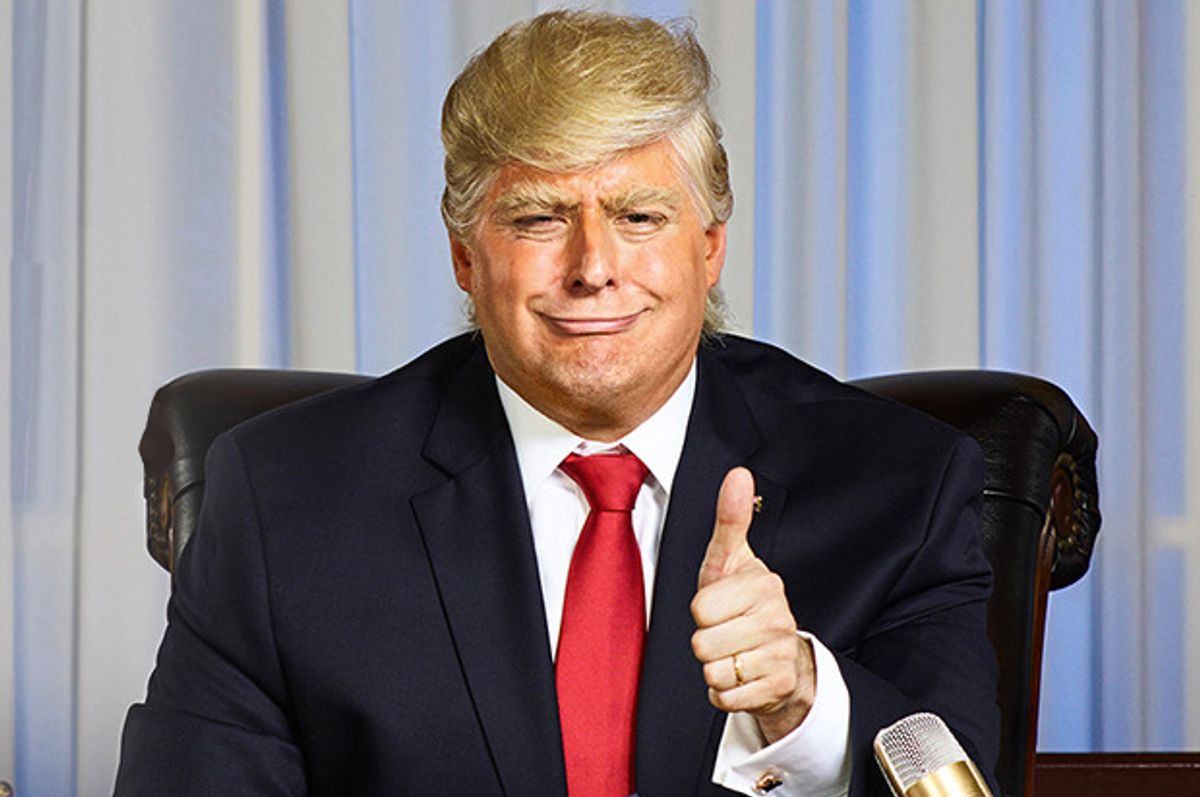 Comedy Central’s “The President Show” — a series starring Anthony Atamanuik as a light-night chat-show host who just happens to be Donald Trump — starts every broadcast with a fake press conference. Earlier this week, free of the inches of orange makeup he wears to play the President, Atamanuik faced actual professional reporters in a real one.

Already, viewers had seen Atamanuik bring his combustible energy to a rather accurate impression of our uninformed, unstable, perverted and mean Commander in Chief in the show's first episode (the truck bit was gold.) Still, that premiere episode was a mere introduction, one in which Atamanuik’s impression appeared was refined, but lacking a certain vitriol. Funny as its debut was, the series' potential longevity remained in question.

Last night’s episode, however, presented an interesting early test of the format: How would the show react to the breaking news that the House had narrowly passed a health care replacement bill? "The President Show" aced it.

The theme of the episode was “surprise.” In the first desk bit, Mike Pence (Peter Grosz) gave Atamanuik’s Trump a can of peanut brittle that was meant to contain a pop-out snake. It wound up being just can of peanut brittle, the joke being, “Oh no, Karen.” Lame, yes. But an excellent seed.

The can of peanut brittle came back around when Trump gave a closing monologue about the health care bill. “To my supporters, you’re giving up your healthcare for nothing,” Trump said. “Zero. Zip. You’re not any safer. You’re not getting your jobs back. You’re not even getting that big, beautiful wall. The billionaire oligarchs who really run this country are getting a trillion dollars in tax cuts. And all you get is a stupid red hat. What a deal!” And then he concluded: “Some of you thought I was a gift. Others thought I was nuts. Turns out I was a snake all along. Surprise!”

The way the show carried this through line and eventually used it to sink its fangs deep into its target was impressive, but more impressive was that it did so this early. Most new late-night hosts take months to settle into their desk. Already, after two episodes, Atamanuik’s shtick feels fully formed.

In part, that’s because Atamanuik has had the better part of a year to hone the role. In the leadup to the election he toured the character in a series of debates against Bernie Sanders (played by James Adomian). Atamanuik has he studied Charlie Chaplin’s “The Great Dictator” in preparation and dissected Trump's mind as well as his mannerisms to get inside the President's skin.  “I like to say that I do an impression of his psyche, an impression of his soul,” he said at the press conference. “I always say [Trump is] like if you took Frank Sinatra and threw him in a bog for 400 years and then took that body out, that would be Trump, with all the rotted charm.” True. The result is that where Alec Baldwin’s Trump is tamped down, almost docile, Atamanuik’s is the sort of zippy, ultraviolet maniac who’d fit in an Eminem video.

The part is engineered for laughs, yes, but also, according to Atamanuik, to make Trump’s voters go, “Wow. He is a disingenuous buffoon. He did take advantage of my vote.” Or better yet, “I would want Trump to watch. I would want him to watch and go, 'Oh my god. That's how I come off. That's who I am?'”

He also has a stellar cast of writers and producers, including Adam Pally, Mitra Jouhari and Neil Casey, throwing him lines. “We're not just trying to do the first-thought jokes that everyone's done about Trump,” Casey told me. “I think part of the fun of it is speaking his language and finding the contradictions and the humor in his point of view.”

This is all well and good, but the most promising aspect of this series is what was on display at this week's press conference —  Atamanuik out of character. There, he launched into a passionate unprompted digression. “We have a mythology in this country that is breaking the back of people who work hard,” he said, denying the narrative that Trump’s victory was the fault of working class people voting against their self-interest . . . And by the way, the working class is over at McDonald's in New York City. They're not just forging steel in Ohio." He added, "So this [is a] lie that we tell ourselves, that it's just that simple — it's just the dumb knuckle-draggers who brought Trump into office, not the distended obnoxious marketing class of people in this country.”

On stage as himself, Atamanuik demonstrated he already possesses what successful every late-night host needs: a sure, sharp point of view.