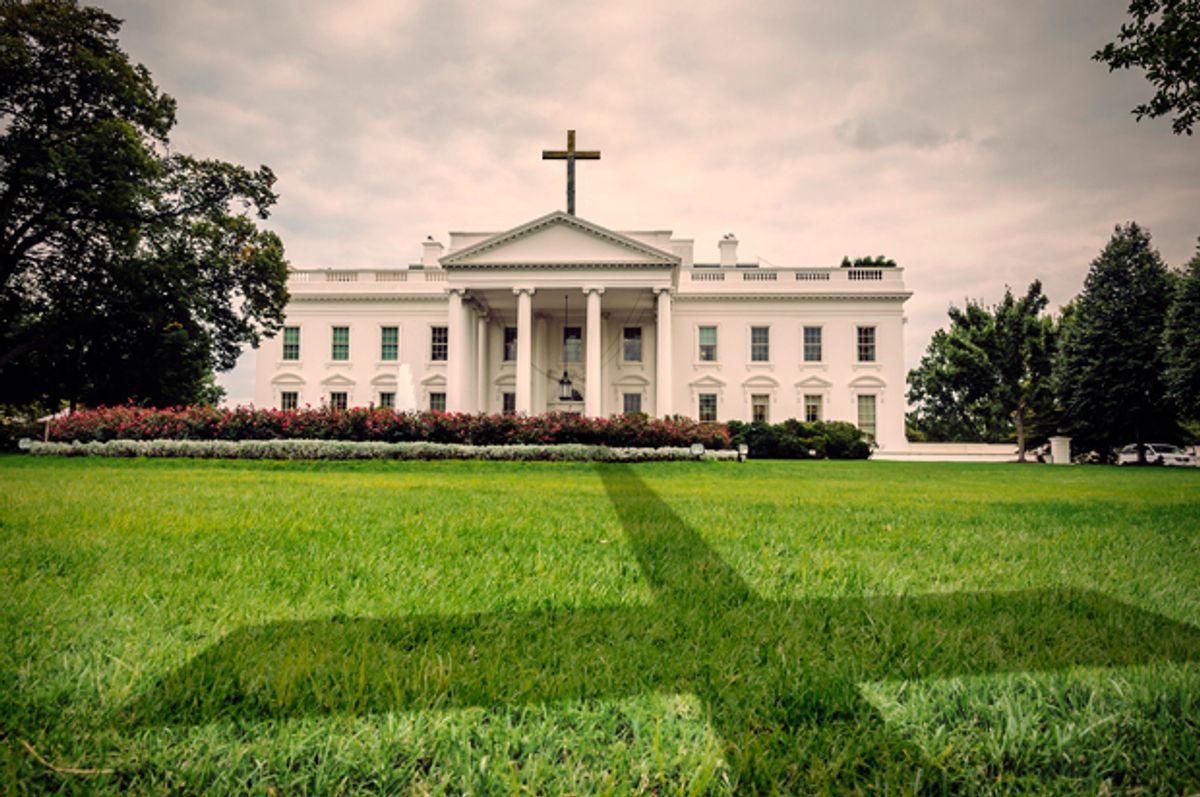 Thursday on the National Day of Prayer, Donald Trump signed an executive order titled "Promoting Free Speech and Religious Liberty." As I reported before the signing, a leaked early draft of the order was largely focused on giving legal cover to government workers, hospitals, nonprofits and even private businesses that wanted to discriminate against LGBT people and women who use contraception or have abortions.

The final draft of the order, however, represented a drastic rewriting. All the LGBT-specific attacks had been taken out and abortion was not mentioned, though the new order does direct federal officials to consider changing health care regulations in order to stop insurance coverage of contraception for huge swaths of women. Instead, in a somewhat surprising move, the executive order largely focuses on undermining a law meant to discourage religious authorities from using their powers to influence elections.

This move is obviously meant as a giveaway to leaders of the religious right, who did so much to help elect Trump, and also as a way for Republicans to consolidate power by allowing conservative Christian pastors even more leeway to pressure their congregants to vote Republican. But this power grab could well backfire on the Christian right. Instead of drumming up more votes for the Republicans, breaking down barriers between church and state may end up driving even more people out of churches entirely.

First, a bit of background on the Johnson Amendment, which bars all tax-exempt churches and charities from participating in political campaigns. Trump's executive order doesn't change the law; that would take an act of Congress. But it officially discourages the IRS from auditing or fining religious organizations and churches that may be violating it.

As written, the executive order doesn't seem especially radical. It simply says the IRS should not become involved when church leaders speak on "moral or political issues" in a way that has "not ordinarily been treated as participation or intervention" when done by nonreligious leaders.

In other words, it's a solution looking for a problem. There's no evidence that churches are being treated especially harshly by the IRS. Churches are already allowed to speak out on a variety of social and political issues without losing their tax-exempt status, and even in cases where pastors openly break the law by endorsing candidates, the IRS tends to look the other direction.

Still, the release of this executive order and all the publicity around it could encourage ministers, especially those of the fundamentalist variety, to become even bolder when it comes to campaigning from the pulpit. That's where there's a good chance this whole effort could backfire. There's a fair amount of evidence suggesting that churches that have turned more political and conservative aren't recruiting more people to the right-wing cause and, in fact, they may be driving people away.

One of the biggest social trends of the past decade is the rapid growth of the "nones," people with no affiliation to organized religion — a trend that's particularly pronounced with younger Americans. The Public Religion Research Institute reported in 2016 that as many as as one-quarter of Americans don't identity with any religious tradition at all, a rise from 6 percent in 1991. Four out of 10 Americans under the age of 30 are unchurched.

But where it gets really interesting is when one starts looking at the reasons why. Most nonreligious people — 78 percent, according to a Pew Research Center 2016 survey — said they were raised in a religion and abandoned it in adulthood. While most simply say they no longer believe, there is some evidence that distaste for the religious right has had a significant impact.

According to PRRI's research, nearly 30 percent of those who have left a church cite their disapproval of religious homophobia as a reason. Sixteen percent say their churches became too political and 19 percent cited the clergy sex abuse scandal.

Beyond the immediate political concerns, it's clear that distaste for repressive religion is fueling much of the stampede out the church doors. Sixty-six percent of nonbelievers in the PRRI survey agreed with the statement that "religion causes more problems in society than it solves."

Encouraging ministers and priests to become more belligerent and more repressive in their politics, in the face of these rapid changes in religious affiliation and religious attitudes, is not likely to gain converts to the conservative cause. It's probably just going to make more people who were already feeling uneasy with the conservative bent of much of Christianity to choose to leave their churches, and quite possibly to abandon religion altogether.

Trump is likely reacting to pressure from a handful of religious right groups, particularly the Alliance Defending Freedom, which have long tried to make hay over the supposed limitations of the Johnson Amendment. But polling data shows that most Americans think it's a good idea to keep churches away from direct political campaigning. Additional Pew Research polling from 2016 showed that 66 percent of American respondents said they supported the Johnson Amendment. Even when it comes to white evangelicals, the group that Trump is trying to pander to, only 33 percent of those surveyed believe pastors should endorse candidates from the pulpit.

“The Johnson Amendment has protected the integrity of our houses of worship and our elections for more than six decades,” said Rev. Barry W. Lynn, the executive director for Americans United for Separation of Church and State, in an emailed press release. “Allowing churches to endorse political candidates will have a corrosive effect that will undermine their ability to unite their congregations to work for the common good."

Perhaps then atheists should be the ones celebrating this executive order. Legally, Trump's latest order is largely toothless, but culturally it's only likely to accentuate the aspects of religion that Americans like the least, namely the controlling and reactionary aspects of it. That, in turn, will encourage more Americans to use their Sunday mornings for sleeping and shopping, rather than enduring political lectures from conservative religious pastors.