Yes, Bernie would probably have won — and his resurgent left-wing populism is the way forward

Now the establishment claims the French and British elections will vindicate the neoliberal center. Not so much! 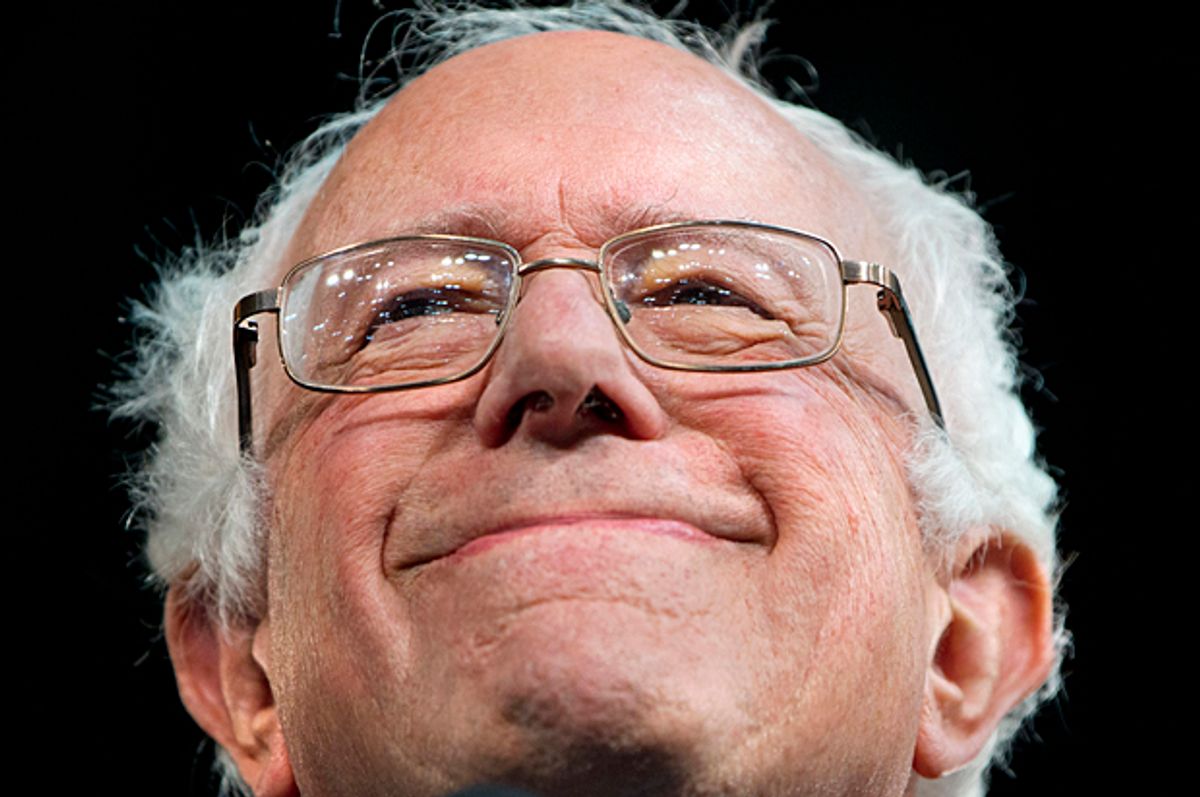 On last week’s broadcast of Showtime's documentary series “The Circus,” Sen. Bernie Sanders finally acknowledged what many have said since last November’s election: that he would have most likely defeated Donald Trump had he been the Democratic nominee for president. After host John Heilemann asked Sanders that directly, the Vermont senator — who has carefully avoided the question until now, so as not to reopen old wounds — replied that it was “likely, but you never know. . . . I am not into speculating. It doesn't matter.”

Sanders' reluctance to discuss the subject is understandable, and stirring up division over a what-if scenario does seem counterproductive; but he is wrong to think that it is pointless speculation. In reality, the question matters a great deal; as Heilemann noted in response, it points to “what kind of politics the Democratic Party should embrace going forward.”

If a democratic socialist who railed against corporate greed and made economic inequality the cornerstone of his campaign would indeed have matched up better against Trump than Hillary Clinton did, then there is little doubt what kind of politics the Democratic Party should embrace going forward. If, on the other hand, the evidence suggested that Sanders would have done even worse than a centrist Democrat like Clinton, then the answer would be to go the opposite route and double down on center-left neoliberalism.

Of course, the evidence strongly supports the former case, as progressives have been quick to point out since November. Trump won the election because of narrow margins in three Rust Belt states where Sanders’ working-class politics is popular and appealing. While Trump remains a highly divisive and unpopular figure (along with Clinton), Sanders continues to rank as the most popular politician in America. In addition, polls during the primary season consistently showed Sanders handily defeating Trump by 10 points or more, while Clinton led the billionaire by only a few points on average.

To be sure, anything could have happened during the general election. Perhaps Republicans would have effectively used the senator’s “democratic socialist” label against him, as Clinton loyalists continue to insist. Or maybe Michael Bloomberg would have entered the race as an independent middle-road candidate, thus spoiling it in Trump’s favor. But the fact remains that Sanders, who continues to proudly call himself a democratic socialist, has a higher approval rating than any of his “conservative” or “liberal” colleagues in Washington.

It seems clear, then, that a genuine populist like Sanders would be Kryptonite for a pseudo-populist like Trump. Yet the Democratic establishment has remained invariably ill-disposed towards Sanders-style populism. Indeed, many liberals and corporate Democrats continue to argue that a populist shift to the left would result in an even bigger collapse for the party in future elections. Some have even claimed that Clinton lost not because she was an establishment politician who epitomized the status quo, but because she was in fact too progressive.

While the evidence does not support this claim, this hasn’t stopped the political and media establishment from running with it and warning against the specter of populism. To bolster the argument, Beltway insiders are currently employing dubious examples from across the pond — particularly in the U.K., where a snap election was recently called by Conservative Prime Minister Theresa May. According to polling, this election is likely to be a resounding defeat for the Labour Party, which is currently under the leadership of leftist Jeremy Corbyn, a figure frequently compared to Sanders. Not surprisingly a recent Washington Post article read this as proof that a decisive shift to the left would similarly undermine the Democratic Party.

Post reporters Griff Witte and Karla Adam describe Corbyn as a “white-bearded baby boomer from the back benches who, like Bernie Sanders in the United States, ignited an improbable movement among young activists.” But now, they warn, the “Corbyn-led Labour Party is on course for an electoral beatdown so broad and deep it would make the drubbing the party took in 2015 look like a triumph.”

According to this narrative, the decline of Labour offers a “cautionary tale” for Democrats in their attempt to recover from the 2016 election. In the same article, the reporters next point to France, a country that is currently in the midst of its own presidential election, where the far-right populist Marine Le Pen will face centrist candidate Emmanuel Macron in a final-round vote this weekend. The Post informs its readers that France’s Socialist Party “rejected more centrist alternatives and picked as its presidential nominee Benoît Hamon, a proud radical” who “mustered only an embarrassing 6 percent” in the first round.

There is a lot to unpack here, but suffice it to say that the Post’s article is part of a larger partisan effort to defend the Democratic establishment against populist revolt. While it's undeniable that the British Labour Party is in a bad way, blaming this on its leftward shift is misleading and just plain wrong. Indeed, polls show that Corbyn’s left-wing policies are much more popular with the British public than the Conservative Party’s right-wing agenda. Unfortunately, there is a serious disconnect between the policies British people support and the party (and candidate) they vote for -- a phenomenon also encountered in the United States, in less dramatic fashion. To some extent, that is the result of Corbyn’s lackluster leadership and serious divisions within the Labour Party; but it's impossible to discuss Corbyn's low approval ratings without discussing the British media, which has made Fox News seem “fair and balanced” when discussing the opposition leader.

A study published last summer by the London School of Economics, for example, found that three-quarters of stories about Corbyn from the major British newspapers failed to report his views accurately. Only 10 percent of articles were positive and more than half were antagonistic. The study revealed “an overall picture of most newspapers systematically vilifying the leader of the biggest opposition party, assassinating his character, ridiculing his personality and delegitimising his ideas and politics.”

“Even more problematic,” the researchers write, “were a set of associations which delegitimised Corbyn as a politician, calling him loony, unpatriotic, a terrorist friend and a dangerous individual. … To conclude, the degree of viciousness and antagonism with which the majority of the British newspapers have treated Corbyn is deemed to be highly problematic from a democratic perspective.”

This deluge of propaganda has paid off, and Corbyn’s approval rating is currently in the gutter — but not because of the progressive politics he advocates. (There is a reason why the media misrepresents or simply ignores his policies.) When it comes to the French election, the Post’s article brushed over the fact that Hamon, when combined with the other left-wing populist candidate, Jean-Luc Mélenchon, received more of the French vote than either of the first-round victors. Also unmentioned was the fact that the Socialist Party is currently so unpopular because President François Hollande — for whom Macron served, not long ago, as economy minister — has governed as a fiscal-austerity neoliberal, not a leftist or progressive.

Thus, neither the Labour Party’s situation nor the political state of affairs in France prove that the Democratic Party should reject populism; if anything, they suggest the opposite conclusion. Populism is surging in both Europe and America, and while center-left parties are hoping to stave off the rise of far-right populism with more of the same, this will simply empower the Le Pens and Trumps of the world in the long run. It is time to embrace a new kind of politics on the left. But as Sanders goes on to say in the aforementioned interview, the entrenched forces of the political establishment will not “go easily into the sunset.”